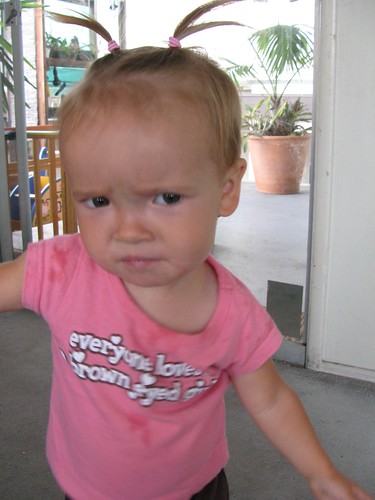 I just can’t help it. Ever since my sister-in-law put in two tiny pigtails, instead of one (ridiculous looking bam-bam volcano spout on top of her head), I’ve been doing this to Baby Bug’s hair almost every other day. Its just so cute to me! Why I find the one pigtail so offensive but two pigtails incredibly adorable, I don’t know. She’s like a little bug receiving messages from outer space. Who wouldn’t want a little martian bug running around their house? Her hair cracks me up all day long.

She doesn’t seem too mind much. She holds still while I pull her hair this way and that to put the tiny “ouchless” rubber bands in. She only manages to pull them out about 20% of the time which is way better odds than the side-bang barrette style I’d been trying to get her to leave alone ever since her hair grew long enough to clip.

One of these days her hair will decide to flop over instead of stick straight up but until then we might as well cancel our cable bill because we’re getting great reception on the tv.