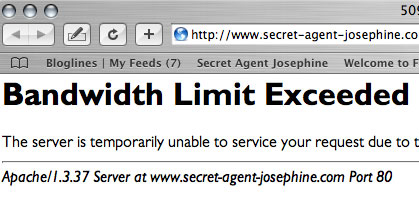 A lot of you have probably noticed that my site has been down lately. This happens at the end of the month when I use up my alloted bandwidth. Don’t ask me to explain how that works, ’cause I don’t really know. I just know it works, and then sometimes it doesn’t. And usually it doesn’t work at the end of the month, after I’ve uploaded my monthly Baby Bug movie.

Thankfully, the really super nice and friendly people who host this site (for free!) have looked into it my little problem and added another TWENTY GIGS to my bandwidth! Yay Stranahans! They love me so much. Twenty gigs is a LOT. Like more than I could ever ever use up. Toby only uses four gigs on his site and he has galleries upon galleries of photography! So I’m pretty happy. I thought I would have to stop making my bandwidth sucking slideshows, but I don’t. I will probably try to keep their size down though, and direct you to flickr more often.

While we were looking into the problem, I noticed that some of the bandwidth suckage was due to myspacers. I’ve noticed this before but it only mildly annoyed me. I put a lot of artwork on my site, so I figure it just comes with the territory that people will steal it. BUT now that my site is going down because of bandwidth suckage, I decided I was going to track down those myspacers and make them pay.

I detest myspace. Myspace.com is like junior high all over again except on the internet. The meat market hook-ups, the cliche yearbook signings, writing “ur” for “you are”, the bad acne… everything! It’s all there in it’s hideousness. Every site I look at blasts me with a song I hate and their design skills make me want to chop off my own head. Clip art and stolen jpegs are plastered all over the place like the inside of your locker. Except it looks worse because it’s all microsoft based and goes completely haywire when I open it with safari. Tables and columns rearrange themselves in such a way that I have to mouse scroll sideways for days to find anything worth reading. It all just gives me a headache. I know there are lots of people out there who use it wisely and have very nice sites, there just aren’t very many of them. 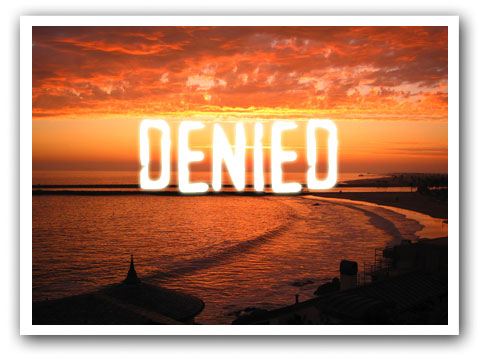 For kicks I decided I would mess with the myspacers. They deserve it. They have been stealing one of the pictures of the beach near my house for ages. The average myspacer probably knows less about html than I do, which isn’t much. Probably somebody somewhere made a template and pasted my code into their html so my picture shows up in the background of their site. Then they passed it on from friend to friend, until there were a bazillion of them (or maybe just twenty, but a bazillion sounds better) who were all hotlinking my image off my server. Well, you know what that means. All I have to do to get them back is just change the image on my server. Piece o cake!

At first I thought I would just write “I wet the bed” or “I eat my boogers” across my image but then I found the most awful embarrassing photo from google images (yeah, I’m stealing too but at least I’m using my own bandwidth) and I copied and pasted it on top of my image and sent it off to my server with same name.

Oh my goodness the results are so funny! I’ve been checking the theiving myspace sites all weekend and reading the comments their friends write to them. Let’s just say I ruined the social life of some budding young youths. I’d love to explain even more but this site is a family site (as in my whole family reads) and the image I posted would be offensive to most of them. But if you’re really curious, email me and I’ll let you in on the fun. It’s been hours and hours of amusement for me. I couldn’t even put the baby to sleep last night because I kept cracking myself up and consequently waking her up.

I almost wish there were more hotlinkers because I don’t want the fun to end.