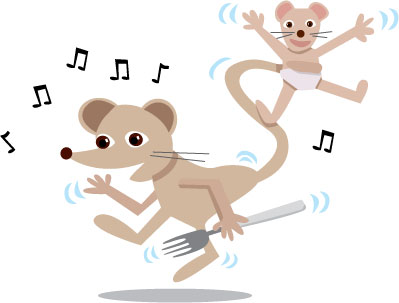 You’re probably wondering: How did you throw a crazy baby shower when you are in the doghouse with Toby over whether or not Baby Bug was over stimulated by all the new faces you keep throwing her at? Well, that’s a good question and the answer is this: Toby was out of town. When the cat’s away, the mice will play.

He knew about the party of course and for the most part it was “approved”. Becky lived with us for six months when she first moved down here from Northern California and Toby is fond of her just like I am. He wanted her to have a nice baby shower. But most of you long time readers know that parties Brenda style are not Toby’s bag. In fact he usually retreats to his office, closes the door and smokes like a chimney out the window for three days straight. Toby does not like chaos.

So where was Toby? He was up in Oregon at the Le Mans Races with his brothers and his Dad. It was a “Guys Bonding” trip with a little bit of sister-in-law (who lives up there) thrown in for fun (it was her birthday after all so she was allowed to crash their party). They had a great time. I thought for sure they’d kill each other cooped up in my small car (yes, they took my car and yes, I let them) for the twenty something hour drive up there and back but they didn’t. Toby got back last night and he and his brother sat around and rehashed the whole event for hours. You could tell they didn’t want it to be over already.

But back to me and how I handled being alone for five days. At first it was fun fun fun. I did everything I can’t do when he’s home working all the live long day. I dropped my most annoying and beloved 80’s pop music into the stereo and danced my heart out in the living room. Baby Bug thought her mommy had gone bananas but you could tell she kinda liked it too. We grooved to Madonna’s Immaculate Collection and then slow danced to some Lyle Lovett. It was great. Then I ate cold corn right out of the can with Toby’s favorite fork. He hates corn and cans and people who eat like slobs. Yes, he has a favorite fork. He’s a freak. I vacuumed loudly in his office and rearranged his GIANT collection of architectural magazines.

Toby hates change and me rearranging his stuff is like letting a monkey do your taxes with fingerpaint. It makes him extremely nervous when I change the order of anything because he’s afraid I might lose something. But I never lose anything. I just have learned that I have to clean and rearrange when he’s gone so that he never sees the process. He hates it when things are upturned and unpredictable.

We’re kind of the epitome of that old saying that opposites attract.

Next, I invited my whole family over to stay in my house. I turned every bedroom into a makeshift Motel 6 room. There were blankets and pillows and suitcases littering every square foot. This would have caused Toby to have a coronary. He needs his personal space. He likes order. My family doesn’t know what “order” means other than that’s what you do when you pull your car into the drive thru at McDonalds. Then we sent my nieces to the beach and that meant sand sand sand everywhere. Towels were draped and dropped. Wet bathing suits were left to rot. It was mayhem.

On Saturday we woke up at the crack of dawn and made lots of noise getting everything ready for the baby shower. It was really fun to be up at 6 am and not have to tip toe or feel guilty for banging plates around as I rummaged in cupboards looking for things that were way way way in the back. My whole family gets up early naturally. We’re early risers. (Toby is not.) We like mornings. We like to be productive. We were like a bunch of noisy birds.

And you know all about the party already. That was fun.

You know where this is going though, don’t you. The fun got old after a while. My family left and I had to clean and put the house back together. That’s no big deal really. I’m weird and I like to clean. But it was kinda lonely after everybody was gone. I started to miss Toby a little bit too. For two days it was just me and Baby Bug and I’ve never been alone with her that long except for that first day in the hospital when Toby had to leave and go to work.

Don’t get me wrong. I LOVE LOVE LOVE nothing more than baby and mommy time but I sorta kinda need a little break now and then too. I always complain that Toby doesn’t do much to help me with the baby and the house work but it’s really not true. He does more than I realized. He always comes in to the baby’s room and plays with her or just says hello. His little funny games with Baby Bug give me a chance to check my email or drink a cup of forbidden coffee or just sit on the patio and clip my toenails. Two days without those little breaks was hard. I think it was hard on Baby Bug too. I think she kinda got sick of me. Either that or it’s this unrelenting heat wave we’ve been having. I think the heat made us both cranky and we got on each other’s nerves.

She’s reaching a stage where she’s learned that crying will get her what she wants. While I’m proud of her for being so smart to already know how to manipulate her mother, I’m also grinding my teeth and rolling my eyeballs back in my head every time I hear that incessant “eeeehhhh eeeeehhhhh eeeeehhhhh” sound. That sound means: “I don’t want to be in my exersaucer. Pick me up. I want to be held. I want to be held NOW. I want to be held ALL DAY LONG.” That sound and the fact that we ran out of fun things to do made me go a little crazy inside.

It’s been so hot that going on pleasant walks is out of the question. We went to the park one day and I accidentally snapped her leg skin in the seat buckle of the stroller. Ouch! I felt so bad. She got a little tiny blood blister on her leg and nothing says, “bad mom” better than a blood blister on a baby. She screamed bloody murder all the way home. Eventually she forgave me but she hasn’t forgiven the stroller. That mean the stroller was out for a while. It’s never really been her favorite anyway and she holds grudges. However, she loves the sling. But the sling is like wearing a torture chamber when it’s hot. It makes you sweat like a pig. Ugh. I hate wearing it when it’s humid and hot. But of course this was the only thing that would stop the “eeeehhhh eeeeehhhhh eeeeehhhhh” sound that was causing me to start chewing my cuticles off. So we walked and I sweated and we found all the air conditioned places in town.

Guess where it’s coolest in town? Albertsons. That store was like an ice box. They must have forty air conditioners on the roof and the thermostat set at 20. It was heavenly. We walked up and down every aisle admiring all the colors and shapes. We went there twice. I would have gone there again but the employees were starting to look at me funny. We also went to Starbucks. Every day. I think Baby Bug’s first words are going to be, “Grande Decafe Iced Latte”.

Somehow we passed the time and just after Baby Bug fell asleep for the night last night, Toby got home. I cannot wait to see her expression when she sees her Daddy for the first time today. It’s going to be priceless.