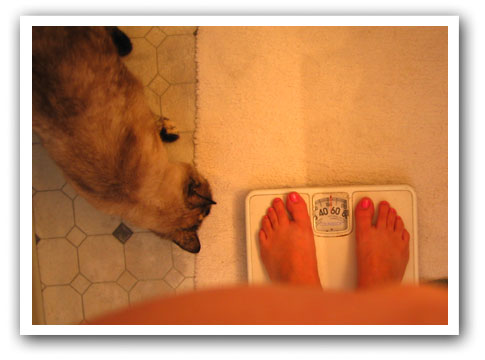 I hate my monthly doctor’s visits. Mostly because that means it’s time to get weighed. Thankfully, this month, I managed to only gain three pounds instead of six like last time. It’s amazing how much better I feel after my doctor says “good job” instead of “you need to do better.” Who would have ever thought I’d have to “diet” when I was pregnant. So I’m pretty happy about the three pounds. I almost want to throw myself a little party and eat a bunch of Reese’s peanut butter cups. Arg.

That’s the good news. The bad news is that I scored one point too high on that glucose test I took for gestational diabetes last week. I knew I shouldn’t have had cereal on the morning of that test. Ugh. So now I have to go back and take a three hour test to make sure I really am diabetic. My doctor says I’m probably not but they want to be on the safe side. I’m just bummed because now I have to fast and then sit in the lab waiting room for THREE HOURS!!!! That means it will be past noon before I get to have breakfast. I’ll be bored AND grumpy. It’s a good thing I don’t have a regular 9-5 job. Sheesh! What do normal women do?

I think I’ll take my laptop and catch up on making spy emblems and work on my paris postcard. Bet you thought I forgot about that. Well, I didn’t. I’ve been working on it for a few weeks now and I’m about 1/3 done. It’s taking forever because I’m trying to illustrate all the major stops we made. It’s going to be neat. Hopefully the detail will show up when printed. And that’s all I’m going to say because I don’t want to set myself up for more failure.

The other news is that the doctor thinks my fibroid tumor may have moved out of the way. How she can tell by fingering my belly is beyond me. But it was pretty uncomfortable. Every time she hit the spot where the tumor supposedly is, it felt like she was pinching my funny bone. I wonder if I’m going to feel that way all the time when the baby gets bigger and sits on my tumor. (Every time I say the word “tumor” I use my Arnold Swartzenegger voice.) The good news about the tumor, is that I get to have another ultrasound! Yay! More chances to see what my little girl looks like. I’m really excited about that.

When I made the appointment today I could only hear every fourth word that the operator was saying. Thanks to my birds chirping in the background and some police helicopter that was flying over our house. (Whoorl informed me there was a fire on the next street over) It’s always sooooo loud where we live. It doesn’t help that we have single pane windows that have at least an inch gap in them so every little sound slips through. I want to move soooooo bad! I haven’t even told you about the latest saga with our landlord. Our tub is falling through the floor and she’s trying to fix it with caulking and a better splash guard on the door. But that’s another blog post.

* * *
On a totally different tangent, does anybody know anything about sewing tea bags? I’ve got a bee in my bonnet. I want to make my own tea bags and tags for a party idea. I’m googling everything but nothing very helpful is coming up.