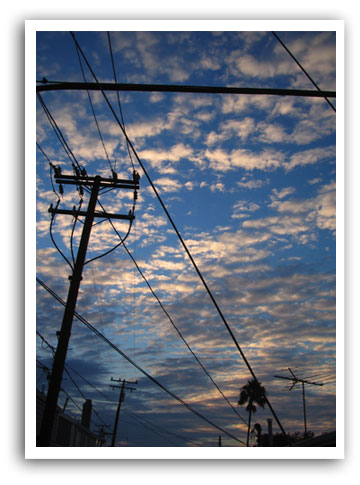 Toby and I spent the day at the tax man’s hoping to file our late late late 2004 taxes. They were due last night at midnight (well actually they were due April 15th and then August 15th and lastly October 17th…). Our tax man convinced us not to file because there were too many blanks we still need to fill in. He wanted to help us but we didn’t have an appointment and he had three already lined up who are also hoping to meet the deadline. He told us to go online and just pay any old amount just so we could stop the penalty snowball. We had until midnight to pay online. We forgot. As soon as we got home I cooked us dinner because we were starving. And then I fell asleep and so did Toby. Midnight came and went. I woke up at 1am. I sat on the couch and cried. I have never been an underachiever before. I’m so mad at myself and us. We could have filed but things are wrong. At this point an audit would be a good thing. We probably need to re-file for 2003 just to make 2004 right and 2005 is just around the corner. Toby tried to go online and pay at 2am. We need a password to pay. Our password will arrive in the mail in 10 days. I have no idea how much we will have to pay. But I know it will be a lot.

Toby says not to worry. But all I can do is worry. I wish worrying made you smarter.