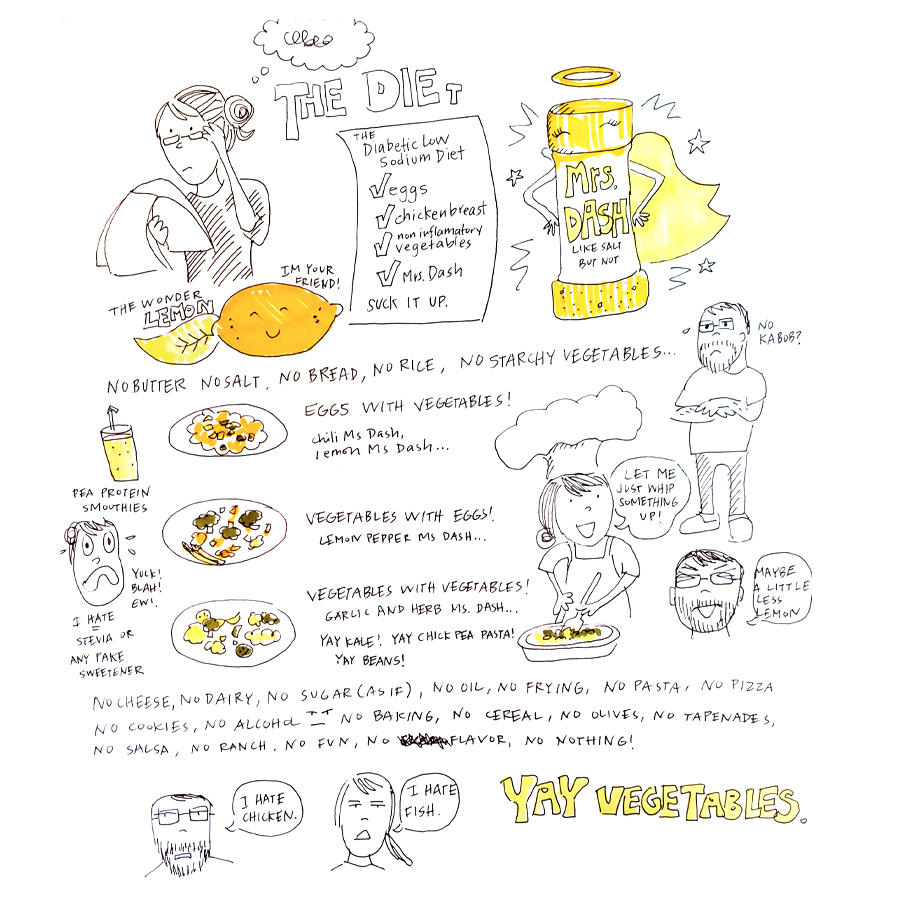 The DIEt has been big news around here lately. I’ve been reluctant to talk about it because I wanted to respect Payam’s privacy but lately, it’s become our way of life. It’s a lot.

Then my mom ended up in the hospital and now it looks like she might need to go on THE DIEt too so it’s super relevant.  So, I got everyone’s permission and now I’m sharing.

I’ll talk about my mom first because that is top of mind. My mom had shoulder replacement surgery last Thursday, the 20th of February. She was supposed to have this surgery in December but was hospitalized for an intestinal blockage in November so they put it off until she improved.  It turns out her kidneys have been compromised because of the diabetes medication she takes, which leads to her having complications after her surgery. We are in the thick of those complications. Right now things are looking up but it’s been a sketchy few days and she is far from out of the woods.

She came home from the hospital Friday. She seemed fine but on Sunday she started acting a bit loopy. Bug and I were hanging out with her and she was lost in dreams. We played music for her and she was playing the piano in the air and talking about dead bugs in the towels. She had no pain and started to make less and less sense but then she’d snap back to normal and we would think everything was fine.

Well, it turns out she wasn’t fine. Her kidneys were not processing the pain medication she was on and she was having renal failure. Super scary. I feel partly at fault for this because at one point on Sunday she fell (into her chair, thankfully) and got out of breath. We panicked and called 911 thinking she was having trouble breathing (a side effect of the powerful narcotics the hospital warned us about). The paramedics came out and checked her vitals. Her vitals seemed normal. We all collectively decided it would be more traumatic to take her to the ER than to stay home. This was a mistake. And I should add, my flying-high-as-a-kite mom did not want to go back to the hospital. The last thing she wanted was to go back to that place where they serve her gross disgusting turkey meatloaf. She was so funny, calling the paramedic a cowboy and making nonsensical conversation. But anyway, she stayed home. My dad called the nurse hotline the next day, worried. She still hadn’t urinated in three days.

They told her she needed to go to the ER and now we find out her kidneys have been failing. Her numbers are right at the level where she might have to have dialysis if they don’t improve. But the experts expect her to improve so we wait. We should know by tomorrow and if she is good then she gets to go home. I will keep you posted.

I don’t even feel like talking about the DIEt now which is sad because I had a lot of funny stories to share. Maybe they will come later.  It’s just been a lot, worrying about my mom. I think she is going to be okay. We gifted my parents a cruise to Alaska in May for their 50th (!!) Wedding anniversary (which is actually in October) so we are all hoping and praying that she gets better in time. Of course, her health is the most important thing. Trip Schmip. I’m just thankful that I bought trip insurance so it’s no big deal to cancel the trip if we have to.

I wish my mom lived next door like she used to that one short year I lived in my Grandpa’s mobile home. That was so nice. It would be so great to be able to help my parents with the DIEt and maybe I could even work-out with my dad. Now that my mom has been going through these health problems, I am even more motivated to keep myself healthy. I even took a run this morning which I haven’t done in 10 years. I think I just needed to clear my head like the real runners always say. It’s just too much sometimes when you feel like you can’t control anything.

So if there is anyone else out there trying to control diabetes or has relatives with diabetes and is fighting the good fight with me, I tip my hat to you. This is not for sissies.  We eat to live now.