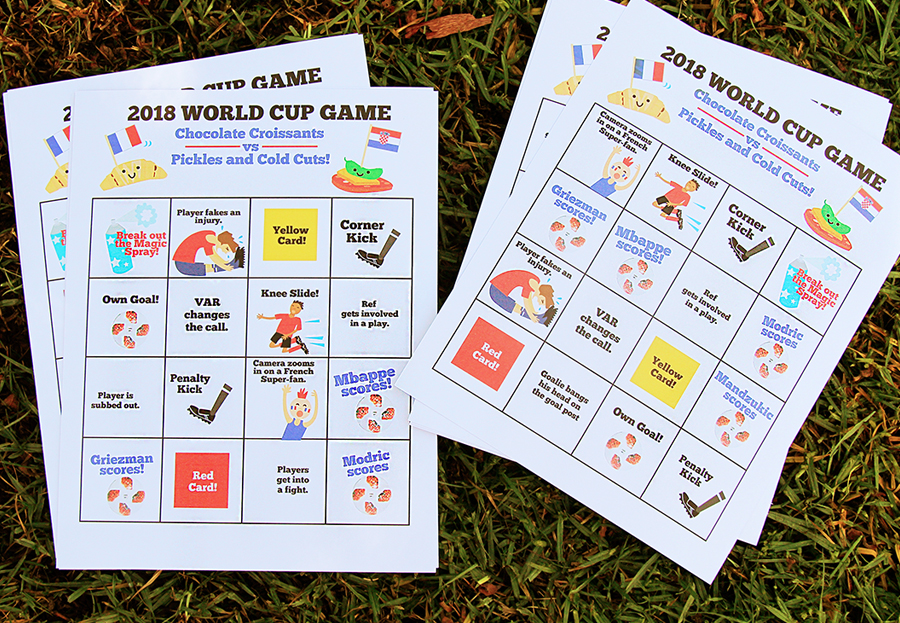 Oh, you know me! A party is not a party until there’s some kind of kid-craft or printable involved.

Free eye rolls for the first person who finds a typo! Just kidding. Do email me. I’ll fix them. I did this faster than fast so I’m sure there are a few. 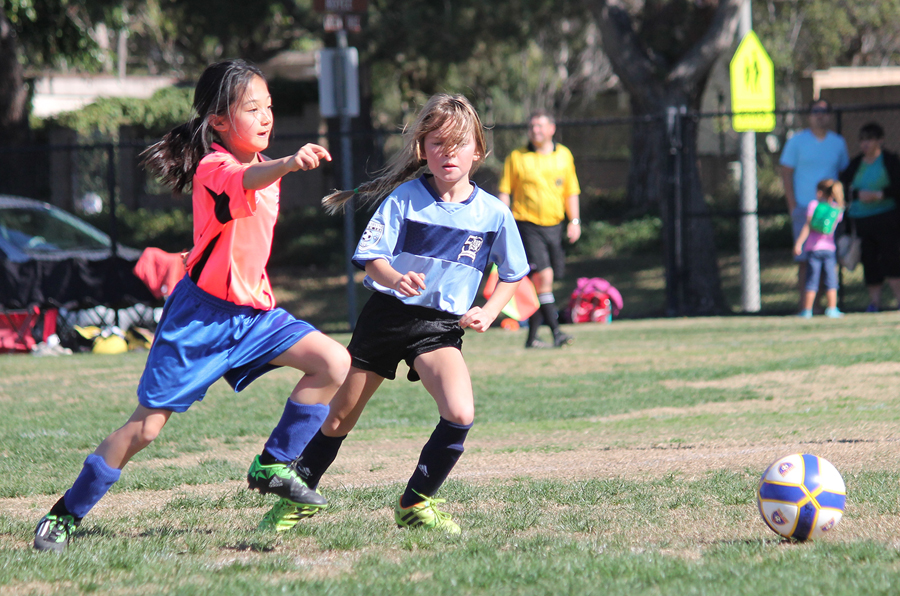 I used to make fun of soccer moms. And now here I am one. If soccer is not your thing, click away now.  This is going to be a long, boring soccer post. I’m sorry.

The thing is, I’m proud of being a soccer mom now. It means so much more to me than just a bunch of girls running around on a field having fun. There’s strategy and teamwork and every game is a chance to overcome being shy and learn to be aggressive. It’s about taking risks. It’s about friendship outside of your usual comfortable bunch of school buddies. There is a lot of joking and laughing and playing but it’s also about paying attention and listening to directions but not listening too much to the wrong people (like certain mom’s screaming their heads off who don’t actually know how to play the game at all, ahem). It’s been a really interesting learning experience for both Bug and I. 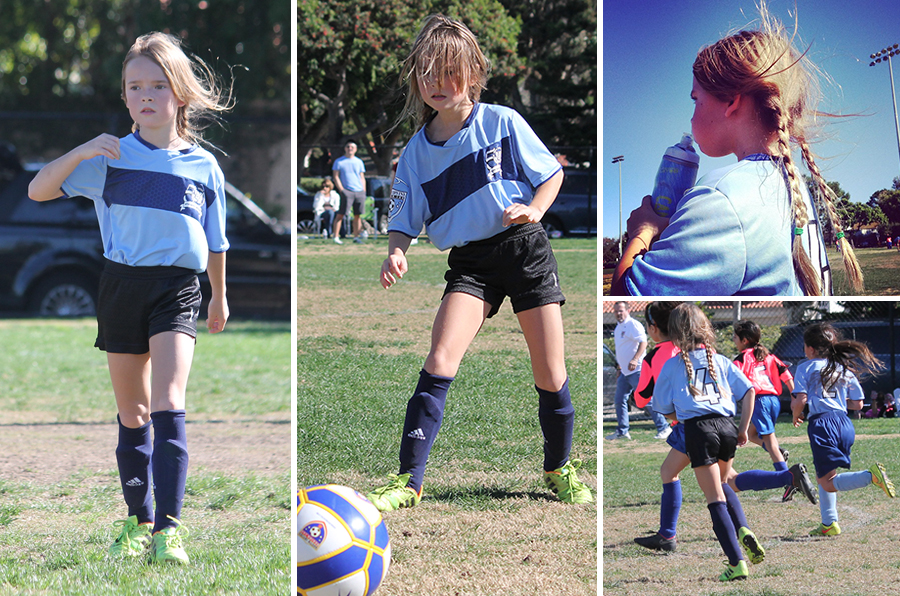 I’m removing two paragraphs here. I don’t want to. I think they are important to the story of our journey with soccer but Bug is at the age where she is starting to worry about her friends reading this blog. So to respect her privacy I’m taking them out. 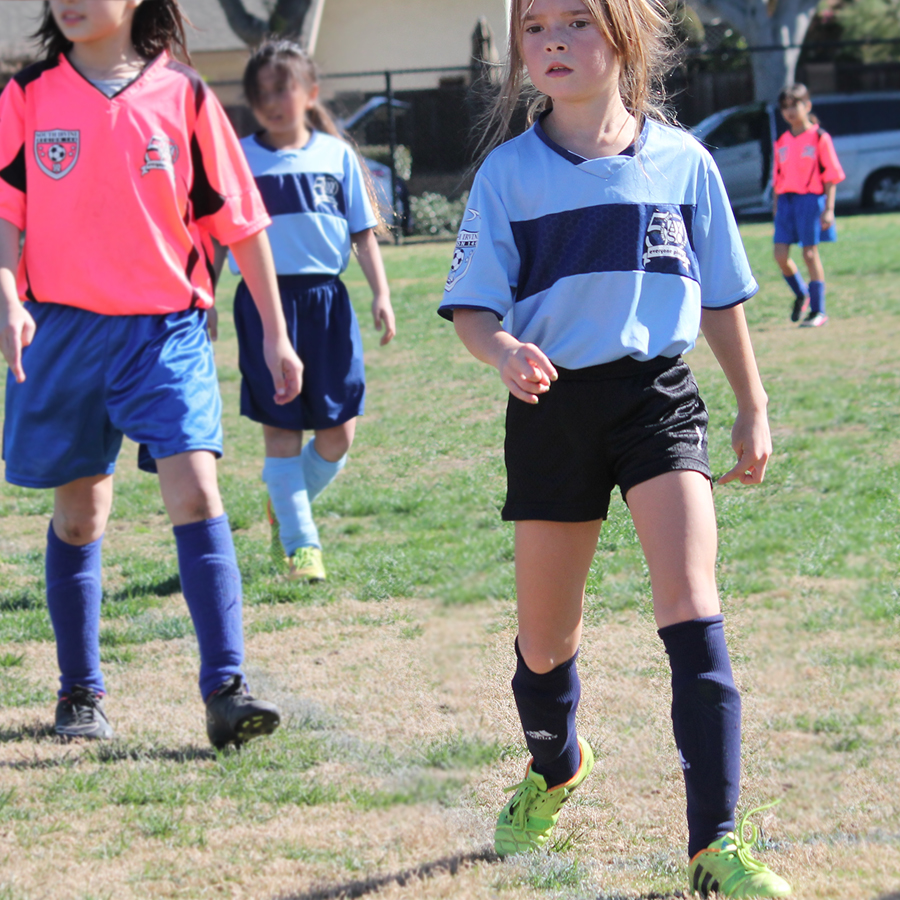 Her first season was kind of a disaster. She was on a ten-and-under team and she was the littlest one there. She’s naturally small so this was big-time scary for her because she was playing against girls who were twice her size and wearing training bras already. Plus, they’d been playing since they were four and five. She was at a big disadvantage. And she didn’t get the game. At all.  She stood on the field staring at the ball as it went flying past her. She didn’t have a clue.

Thankfully, her coach was an angel. He kept challenging her. He didn’t give up on her even when she kicked the ball the wrong way. He coaxed and cajoled her into playing and at the end of the season he gave her a trophy for most improved player. It was a golden moment for her. Not quite a turning point but it kept her going even though she hated playing. Sometimes she would cry before games and beg for us to take her off the team.

The other girls helped out a TON. They were all best buds. They made up nicknames for each other and they all doted on Bug. She was their littlest player. An underdog that even the strongest player would kick the ball to just to give her a chance. It was amazing to see how they took her under their wings.

Then that season ended and the really good players moved onto more advanced teams. It was hard to say goodbye to friends but life moves forward.

So we signed Bug up for another season, against her will. What mean parents we are!!  She was put on a new team with all new girls and two of her old team mates. She knew a little more about what was going on now and she wasn’t the littlest player anymore. But now there were new girls who were even better than the last girls. They were all about the game and not so much about joking and laughing.

I love her new team. They are lethal. There are girls on this team that only care about the ball. They are like those dogs who only care about playing fetch and will chase after a tennis ball until their heart gives out on them. The tricks these girls can do with their feet leave me with my mouth hanging open. Backwards, forwards, sideways…they probably dribble balls in their sleep. I love these girls! Best of all, they motion Bug to do this and that. There’s no standing on the field spacing out anymore. They demand that Bug plays her position. It’s amazing to watch. It’s peer pressure at it’s best.

Bug is naturally shy with the ball and wants to just do little passes to her teammates who are more aggressive but today the coach put her in an offensive position and pulled his good players back. We were pummeling the other team and I think he wanted to give them a break. And it’s always a good teaching move to put your weaker players in a position to better themselves. Bug mentally knows what to do but just hasn’t had the confidence UNTIL TODAY. It was just her up there and no buddies to pass to. I was a little afraid for her.

And then she took the ball!!  Oh, I was so proud of her!  She didn’t make a goal but she took the ball from her opponents (which she NEVER does) and she dribbled it down the open field for a good third of the field!!  You should have heard me screaming and yelling. I was falling all over myself excited. I almost fell out of my little squatty soccer mom chair!

I know parents of strong players will be rolling their eyes here but you have to understand, I’ve been cheering Bug on for not doing much for a very long time. So today when she did something aggressive it was very very exciting!

She lost the ball at the turn, right before the goal but it was still a great move.  I know she’s still got a ways to go before she’s a strong player but I see a glimpse. But even better than that, I know playing soccer is going to stick with her. I know she’ll be proud of it someday. She’s got the brains and the body to be a great player and maybe if she keeps going the way she is she’ll catch the fever to play like the other girls. That’s what I’m hoping.

And if she doesn’t ,well, that’s okay too. It’s taken her out of her comfort zone. It’s introduced her to a lot of new friends who are very different from her. It’s pushed her past her anxiety. It’s been good for both of us. 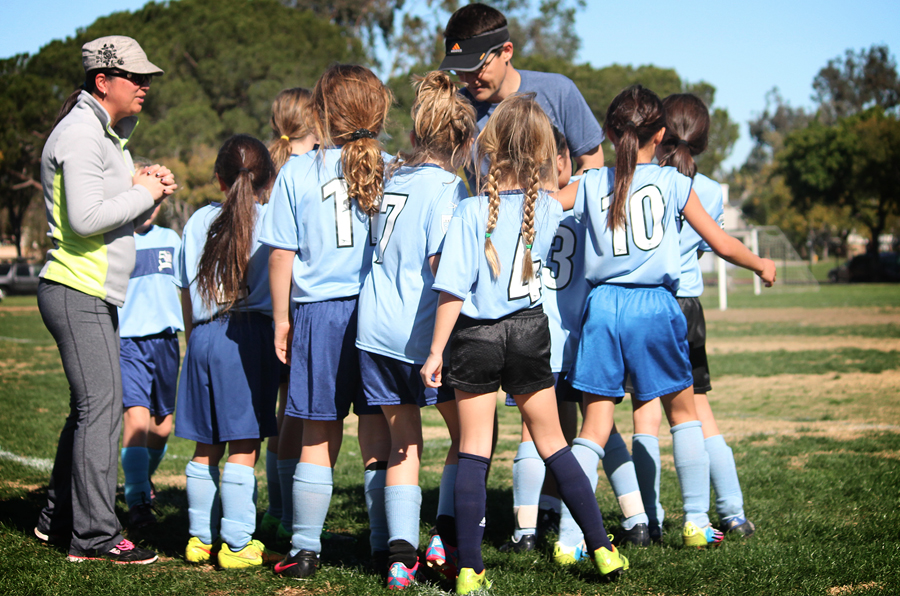 I think team sports are good for a myriad of things. It builds confidence and independence, teamwork and camaraderie…it just all-around helps with some difficult life lessons.  For some of us that’s learning that life isn’t just about getting the boys to like us (I speak for myself here too) or learning to take a risk when you think you aren’t any good at something. For some of us that’s just pushing through the difficult parts to get to the part where you are proud of what you’ve suffered for. Getting good at something takes time and it’s not easy. There are a lot of bad days and a lot of crying and skinned knees and tired cranky muscles…but if you can make it, it’s so so worth it. It’s something to be proud of.

I can’t wait until the day she scores a goal. That will be a very big deal.