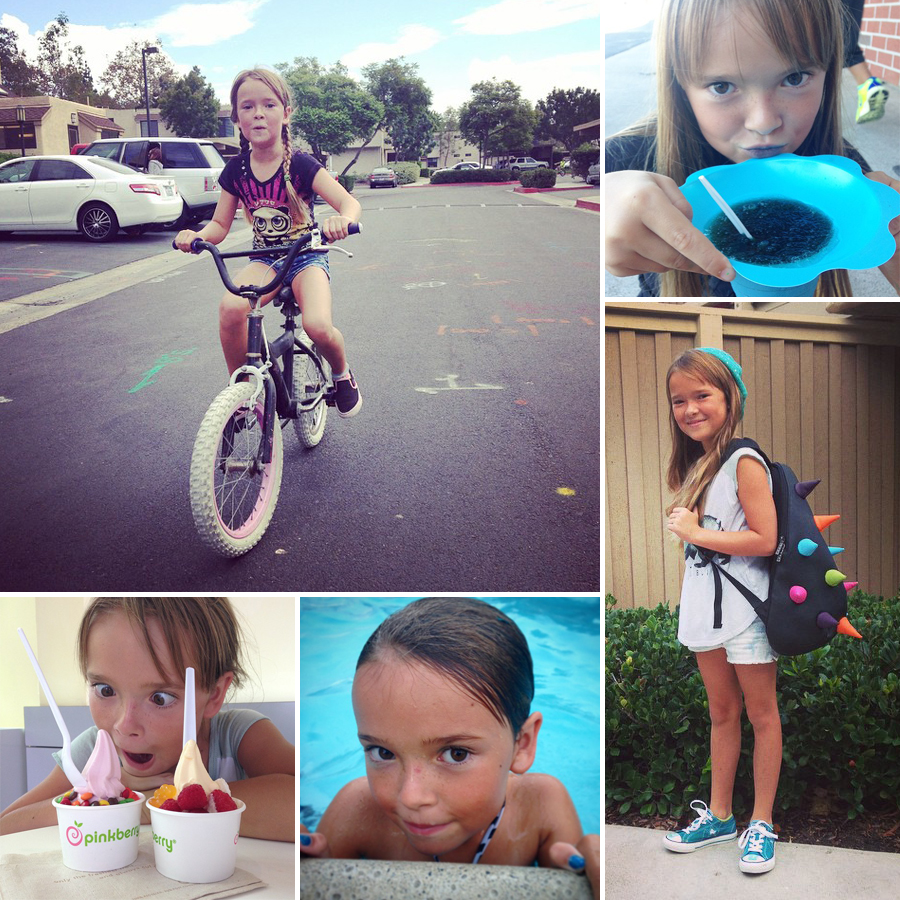 What a crazy beginning of September it’s been! Back to school (third grade!). Soccer practice TWICE a week. Bug taught herself how to ride a bike…. I think her brain is exploding.

It’s been brutal. I don’t know what we’d do if she added music lessons or fashion camp or robotics classes to her schedule, along with her once-a-week gymnastics training. I was feeling pretty sorry for her and her lack of a day off until Toby informed me that that’s how all kids do it these days and if she wants to compete with them in the future job market she has to get used to the rat race sooner or later. Sigh…I just want to go back in time. I’m glad she had a long boring summer now.

I’m sad to say her anxiety has come back but she’s handling it as best she can.  Which is really all we can do.  That’s the biggest thing I’ve learned through this journey.  I have to let her find answers and solutions. I can help but I can’t do it for her which of course is impossible for this helicopter mom.  I’ve been meaning to write a post on all our tips and tricks (and $600 bill to a therapist!! So not worth it.) but I haven’t quite gotten to that yet. Hopefully soon.

Lately she’s been sleep-talking and crying which breaks my heart. Has anyone dealt with that? It’s not really about her phobias and fears, more like just creepy nightmares that kind of scare me when she refuses to wake up. It’s like I’m part of a horror movie and she’s turned into a zombie looking all over the dark room at things I can’t see. When I ask her about them in the morning she can’t remember a thing. I’m thinking it’s just the way brains deal with scary stuff but it worries me. 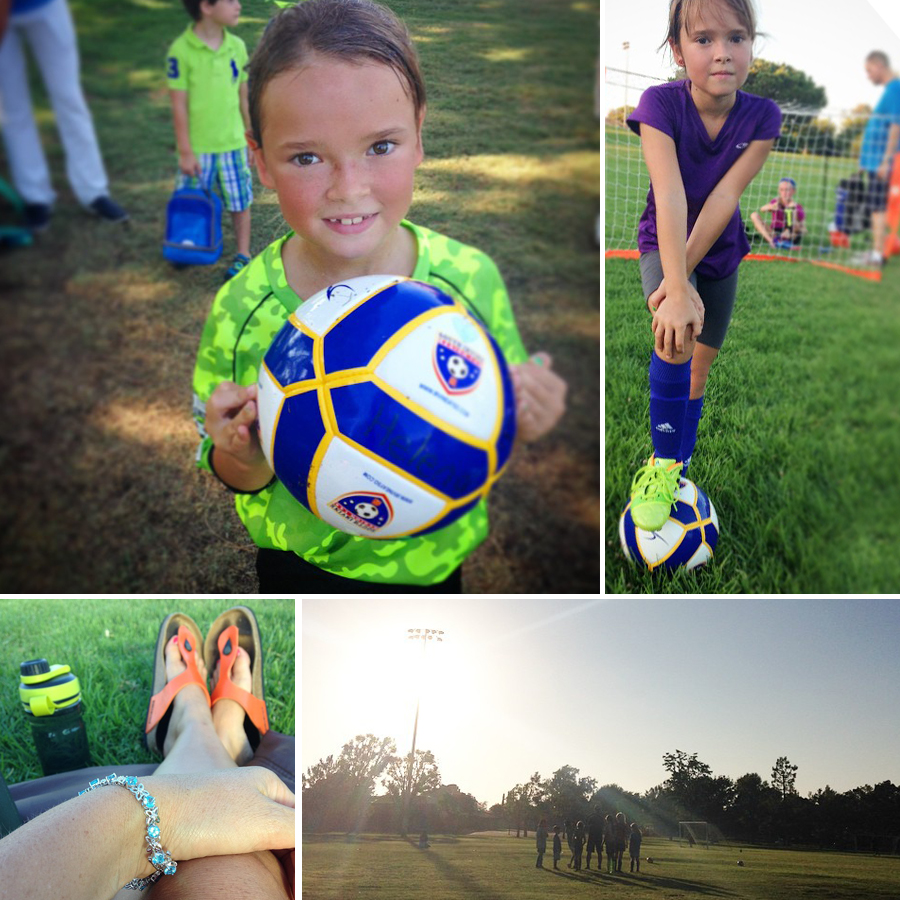 Soccer! Soccer, soccer, soccer. What a huge learning curve for Bug and I. She finally got assigned to a team and everyone is bigger and more experienced than her. Seriously, she’s playing with nine and ten year-olds. That’s what I get for daring to ask the commissioner if she could be on an under-eight team because she’s little. I guess they don’t take personal requests seriously. I can understand that. I’m sure they get tons.

It’s Bug’s first year playing so most of the time she stands like a tree in the field while everyone else runs around her. Thankfully, she has a really patient coach who believes in her and is very encouraging.  I think she’ll get it soon. They did win their first game which was super exciting.

I’m taking to soccer-momming quite well. I should have a blog on field-side drink recipes and fashionable shade receptacles coming along soon…maybe one on snack ideas since I am the designated snack mom on the 20th. Just kidding. I don’t have any such thing. I’m completely clueless. What do I make? Rice Crispie treats in the shape of soccer balls? Kababs? Frozen grapes? The first mom who handed out snacks had a three course meal stuffed in a princess party swag bag. I’m kinda worried. 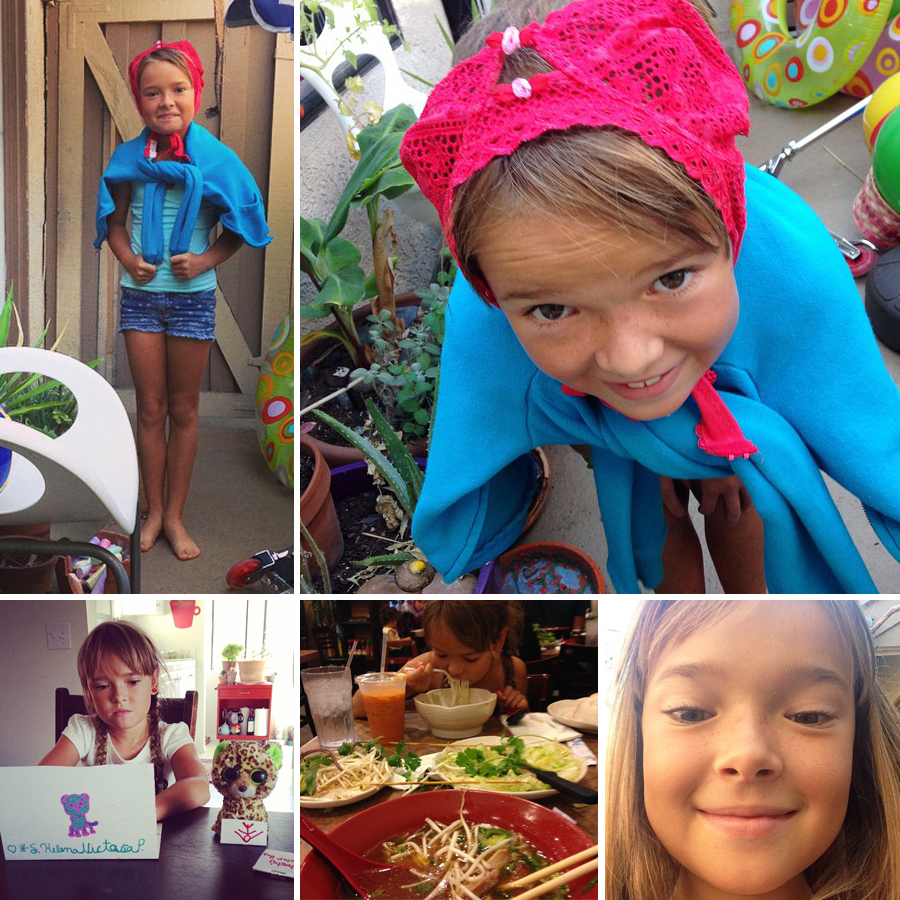 Outside of new school stress, crazy nightmares and overall soccer exhaustion, Bug is up to all her old tricks. She has always been a funny kid who makes people laugh but lately she gets me rolling. She’s a little comedienne. Super Girl costume with bra headpiece? Check. Take Your Stuffed Animal to Work Day, complete with mini paper laptops?  Check. She’s always up to something. I love this stage because she’s so much more self motivated. If I don’t pay attention, she completely messes up the house with one grand plan or another. 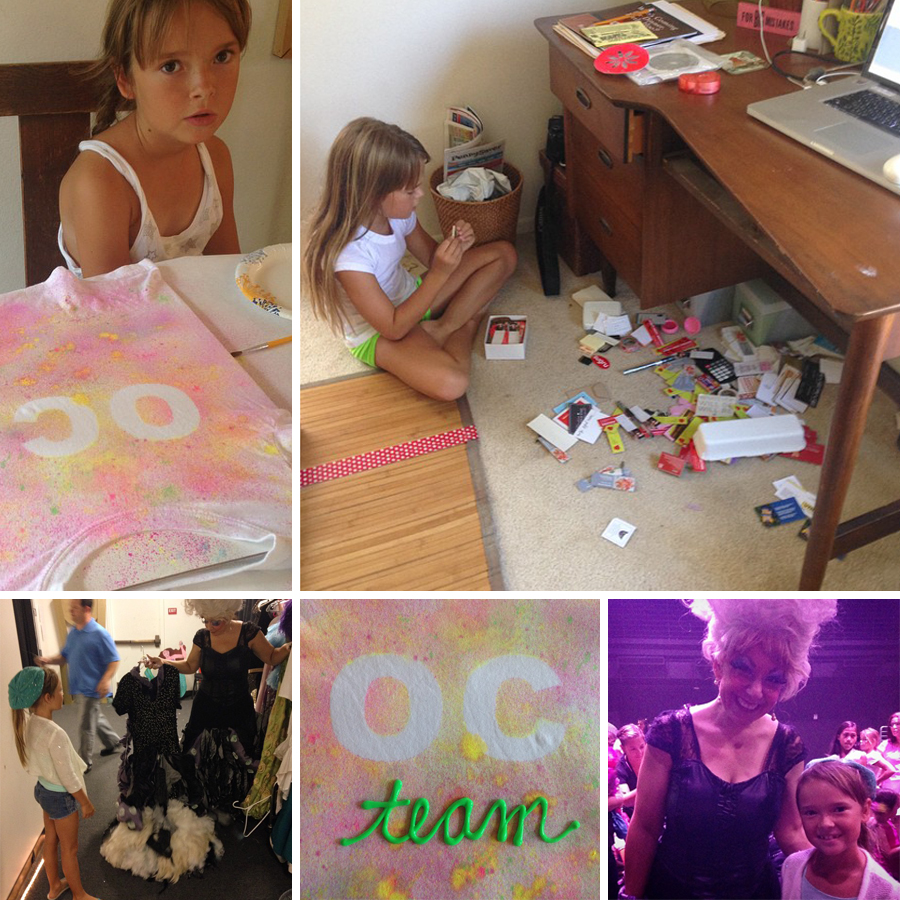 Like looking for the tape (that she used up) in my desk drawer and completely upending it all over on the floor.  Oh boy. Who says toddlers make bigger messes? It doesn’t stop! Just because they are bigger and more coordinated? No.

This block of photos is a bit random because it also pictures a t-shirt craft Bug dreamt up all by herself while I worked on another t-shirt craft (coming soon) for Alphamom. Isn’t it cool? We got into a big argument over the puffy paint. I hate puffy paint like I used to hate sororities in college.  Maybe because sororities always made those puffy paint posters that drove my inner artist crazy. I don’t know. Anyway, in the end I scripted the word team on it for her but I fully expect it to be peeled off by the end of the day (she wore it to school today).

Also pictured is my good friend Tamie in the play, Little Mermaid. We went to see her this last weekend and it was a blast. (Yes, I am singing Little Mermaid songs on repeat in my head now. At least it’s not Frozen!) Tamie has always been in drama and watching her belt out Ursula songs was like being back in time for me. 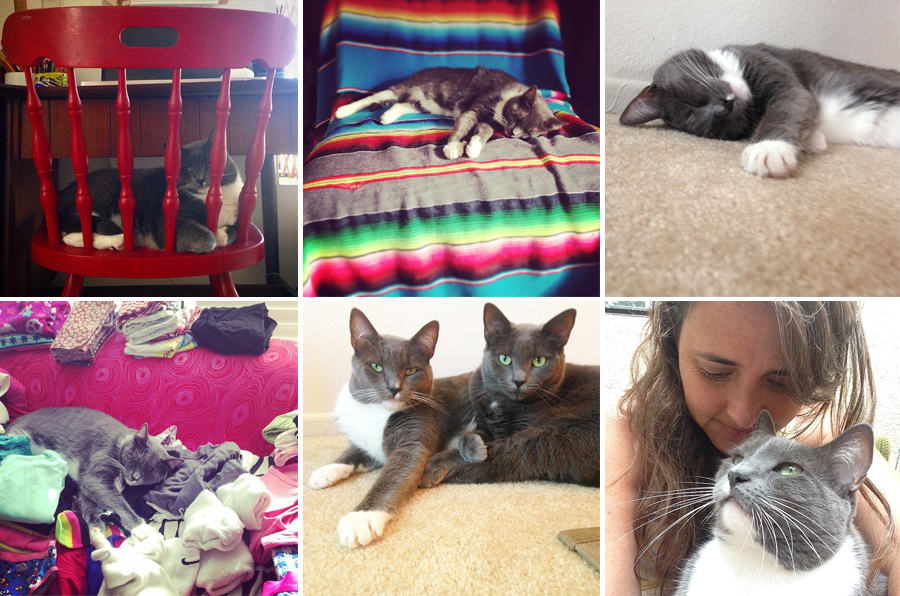 Also seen on instagram: cats. What? Isn’t that what phone cameras were invented for? 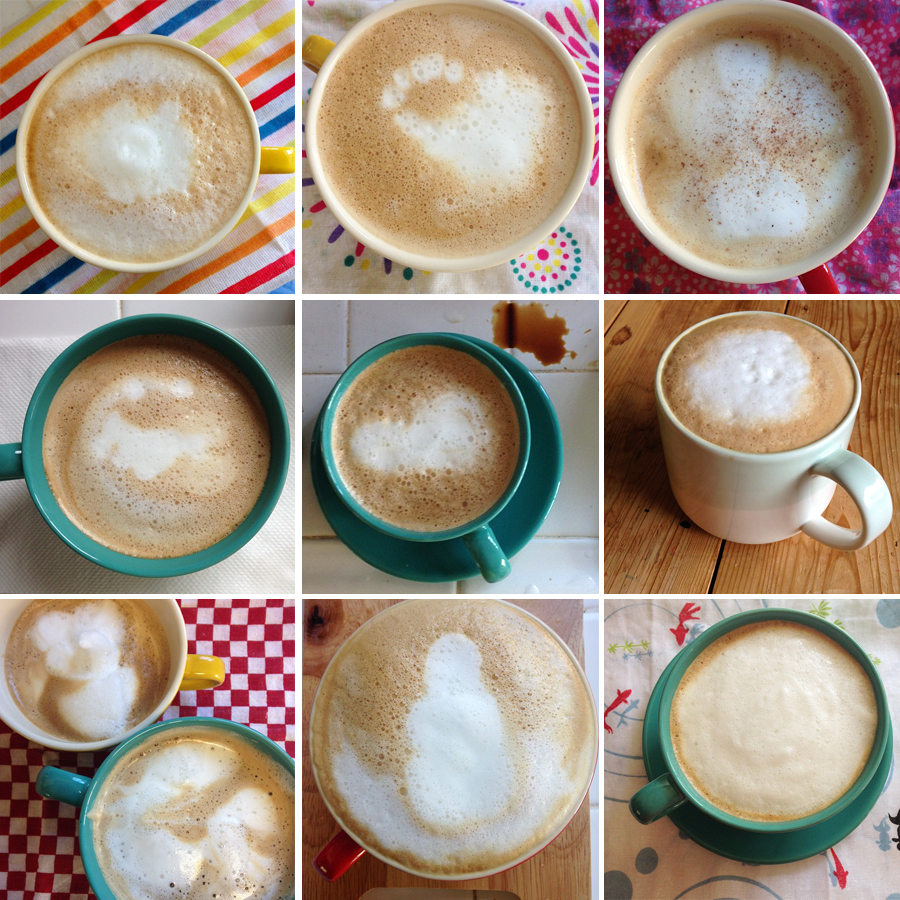 And failed latte art! A few friends have asked me if I have an endorsement for lattes from some coffee company or something. No. I wish!  I’ve got no coffee gigs. I’m just stubborn and I refuse to give up trying to create latte art even though it clearly seems like I’m never going to get the hang of it. There are just a whole lot of variables! And now that I’m making them during my morning rush to school, things seem to have taken an even further step backwards. Oh well. It makes life more interesting. Never a dull moment around here.

Coming soon: Talk Like A Pirate Day, Anxiety Tips and (insert drum roll here) Dishtowels from Daiso! I know you are dying to get the low down. 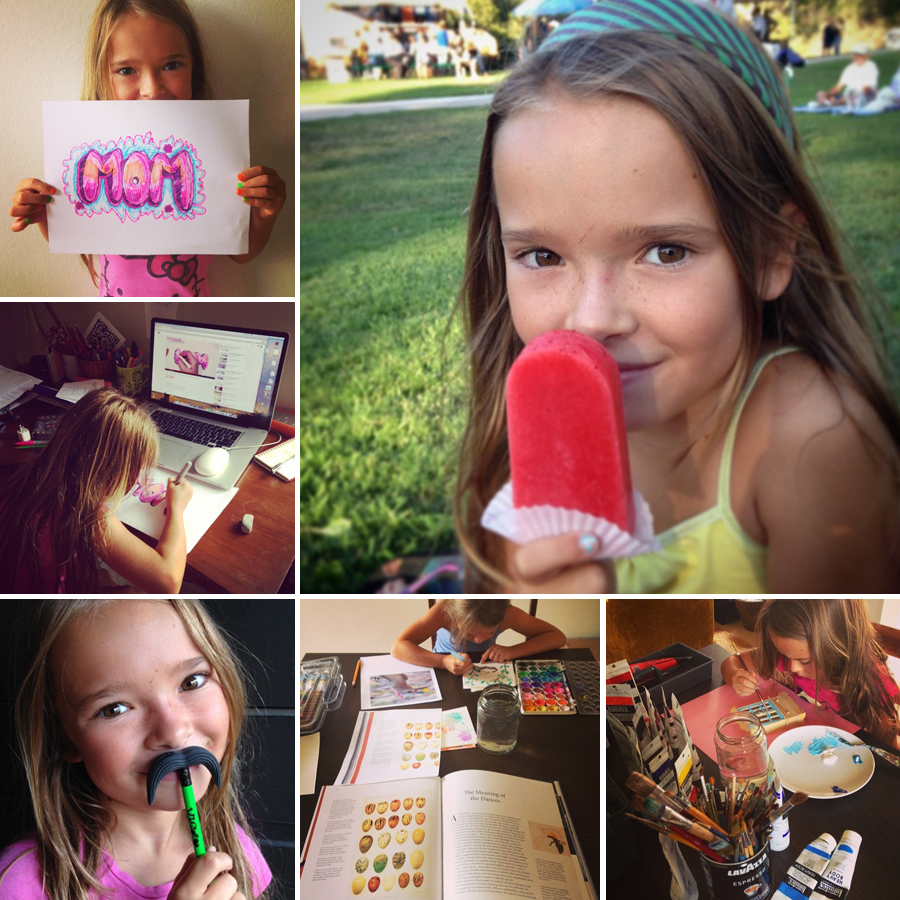 Hi! Just checking in with some summer updates.

This whole working from home while your kid self-educates on YouTube is working out for me. She’s quiet all morning and I get so much work done. Who knew! I like to think she’s watching educational videos (which she is! How to marker-pen your own Graffitti? Check!) but apparently she’s also found the dark side of YouTube and fell down some rabbit hole that lead her to see some scary Bloody Mary video that has her afraid of our walk-in closet.

Seriously. I’ve babysat kids who live in mansions who are afraid to walk down the long hallway to their bedrooms but we live in a one-bedroom apartment!  You can’t go anywhere in our house without being within hearing distance. So we’re dealing with that and she’s been banned to her kid-approved profile on Netflix. Before you turn me in for being a horrible parent, please note that we promptly clock-out at 2pm and head to the pool EVERY DAMN DAY. Tough life, man. 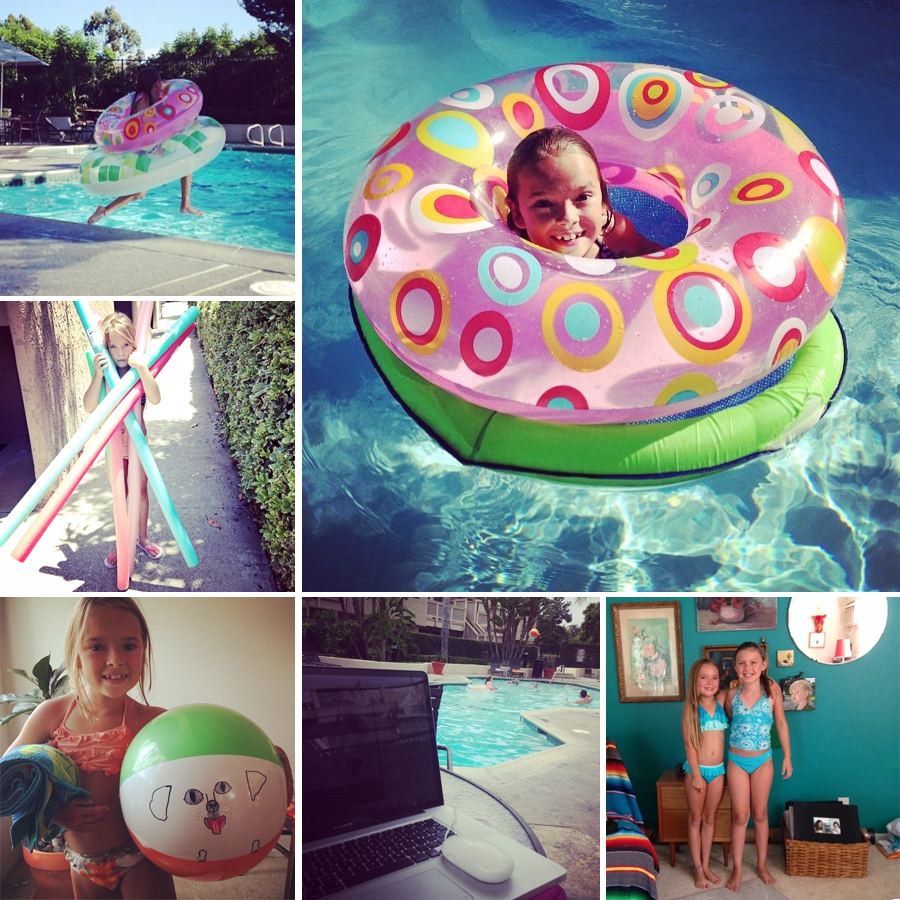 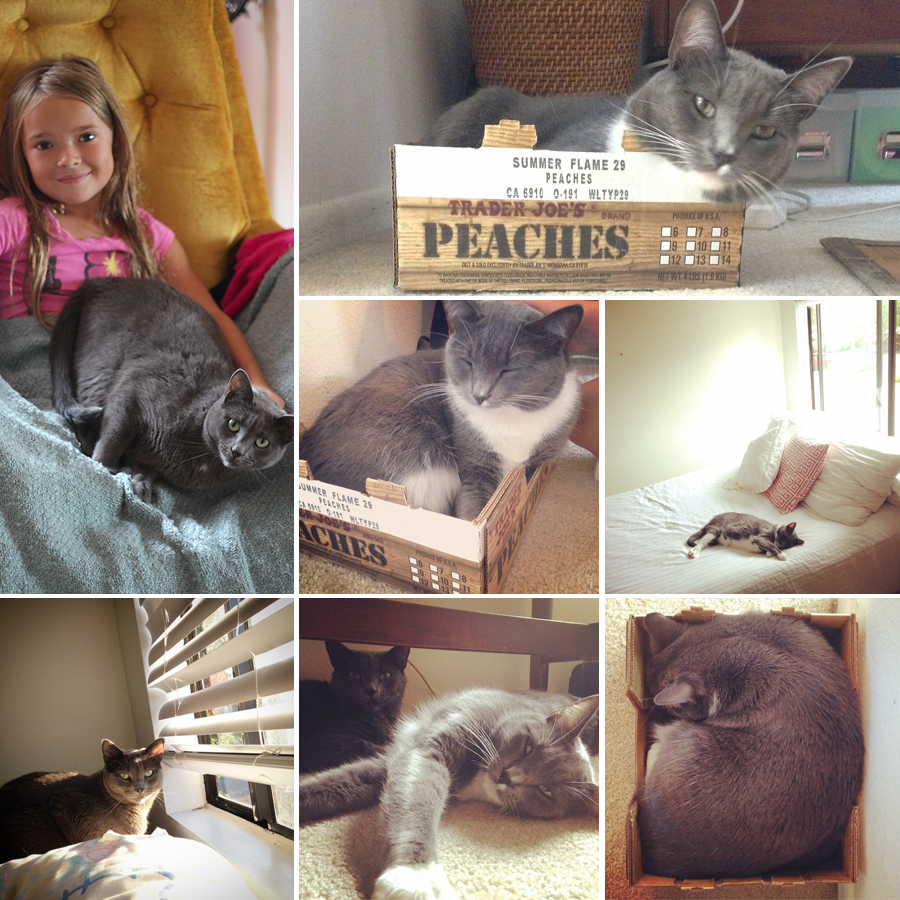 In other news, do you see that we missed the Trader Joes peaches recall by one digit!! But hey, the box makes a great cat bed! 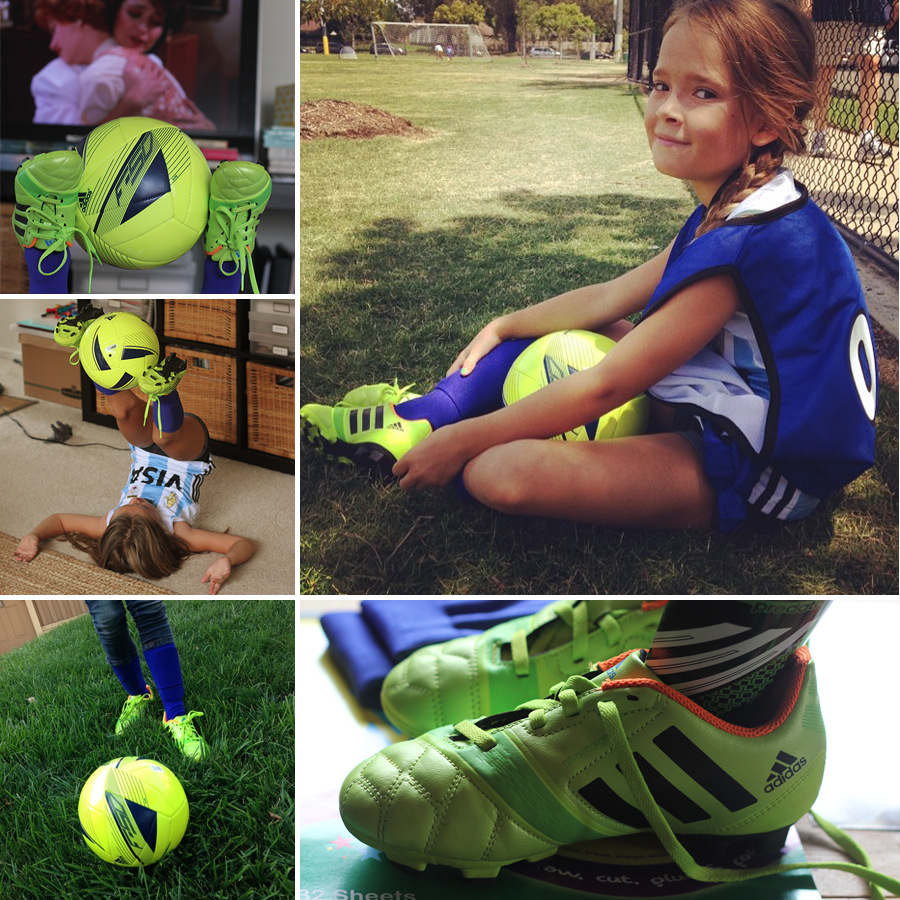 Soccer starts this fall and Bug is SO excited. She had trials this week to find out what team she’ll be on and when I thought she’d be timid and scared (because she’s never played before and most of the kids there had) she was bounding with energy and enthusiasm. She made a bunch of rookie mistakes but I think she’s going to do great.

This is my life now! I’m going to be a soccer mom! I’m going to have to eat all those jokes I made about soccer moms slicing oranges while they drive volvos…  I’m a little afraid of how much of a commitment it will be (how many practices will there be and will I remember my chair and sunscreen?!!) but I’m looking forward to it. 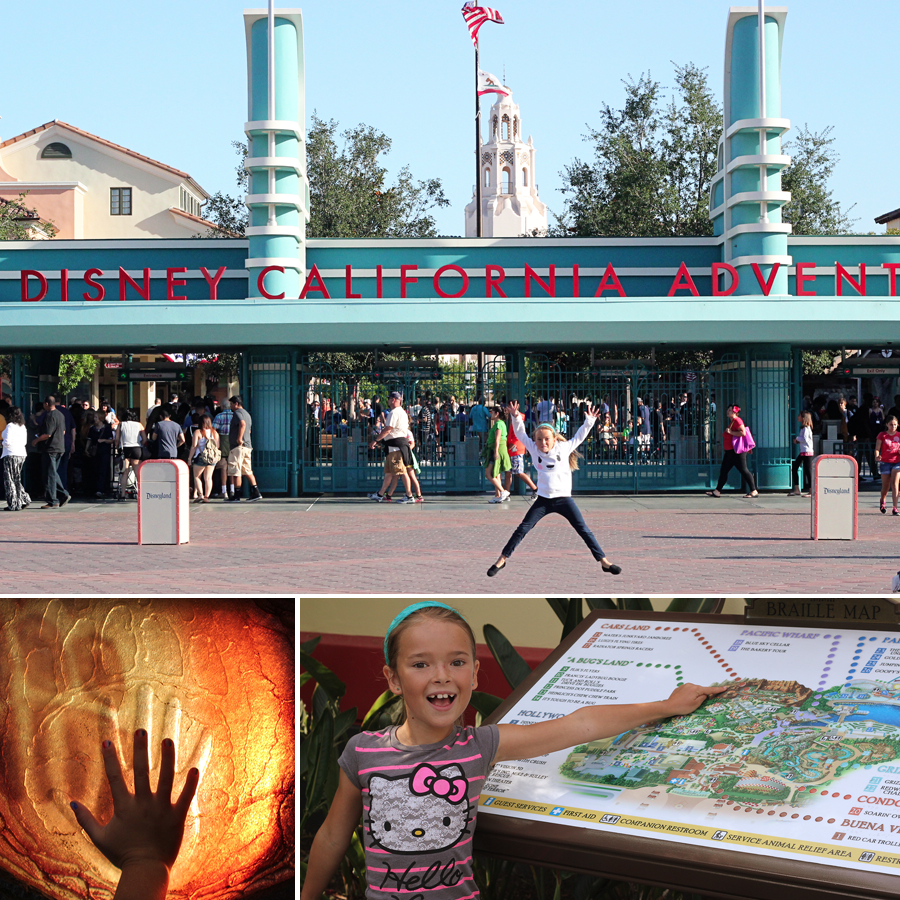 And last but not least, I’ve got a few posts up on Alpha Mom on Disneyland and Disneyland California Adventure.  What can I say? It’s been a fun, crazy summer so far. How’s yours?