posted in Family Matters, I'm an idiot, Life Lessons, out out out of the house!, photography, The Desert, the sticks on October 15, 2018 by SAJ 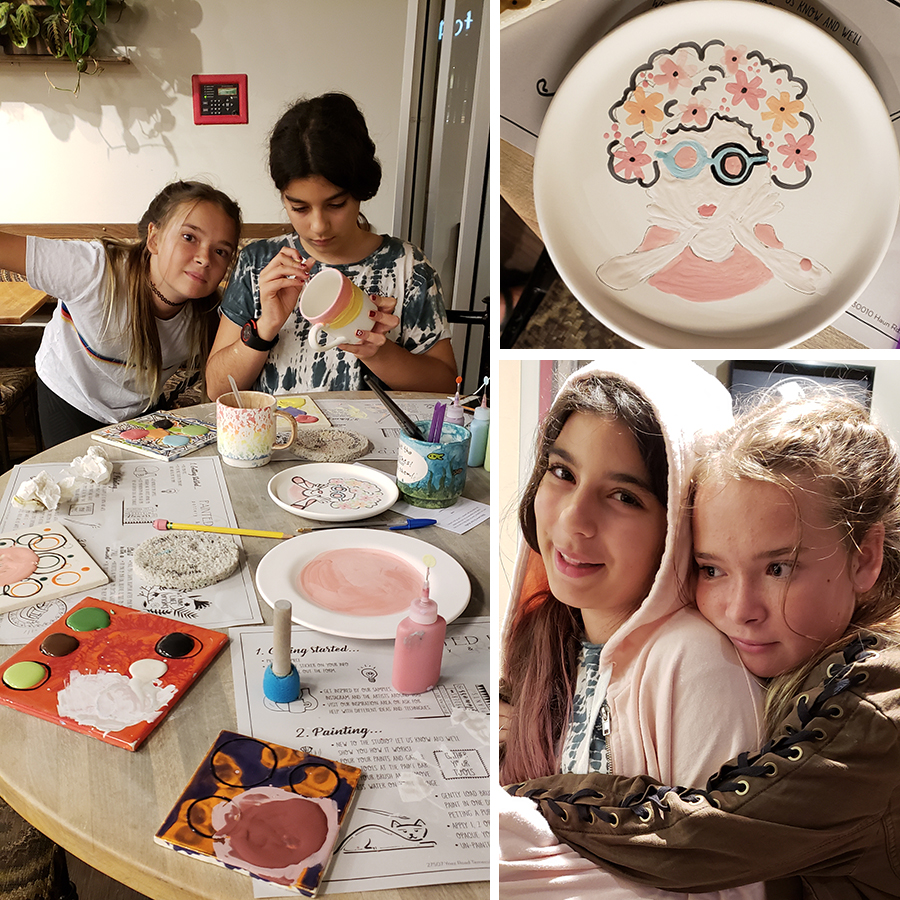 Most people would take it easy on a weekend before they jet off to another country but I did not. I decided to schedule an apple-picking expedition with my kids because that’s what you do when you are “basic” and it’s fall and you can’t fit it in any other time.  But really, there is a reason so many white people like to go stand out in an orchard and take pictures of themselves picking apples. It’s pretty! And it makes all the cozy seasonal bells go off in our heads which aren’t really going off normally because we live in Southern California where seasons do not exist.  I hate pumpkin spice lattes so I have to find my seasonal jollies where I can.

We were due for a visit to my mom and the kids hadn’t painted pottery in sooooo long. They’d been begging to go since this last summer but we never got the weekends right. It was time. They wanted to see my mom’s new house etc etc…

EXCEPT an epic storm blew in and messed everything up! As you know we don’t have weather here so when something so much a little puffy cloud blows across the horizon we all send out massive storm warnings and freak out. The roads are slick because they are covered in oil and dust that hasn’t been wet in half a year and everyone goes crazy driving their cars into each other.

We left as soon as the girls got out of school but that didn’t help the traffic problem at all. In fact, I think everyone and their cousin had plans to get out of town at that exact same time. Add some rain and it was mayhem. Google maps routed us off to some tangent mountain road and then stuck us there for HALF AN HOUR because of course mountain roads are not any safer than any other road and of course there were five wrecks. Good times!

Actually it was kind of awesome though because we didn’t have wifi or a radio signal because of said mountains and the girls had to actually get off their phones and talk to me. It was great. We sang, we laughed, we connected our bluetooth to Joon’s playlist and rocked out with the sun roof open. It was QUALITY BONDING TIME with a light sprinkle.

Long story short we made it to the pottery painting shop, painted until 9pm, had a quick Panda Express dinner (my worst favorite place to go but the girl’s favorite) and then finally made it to my mom’s at like 10pm. 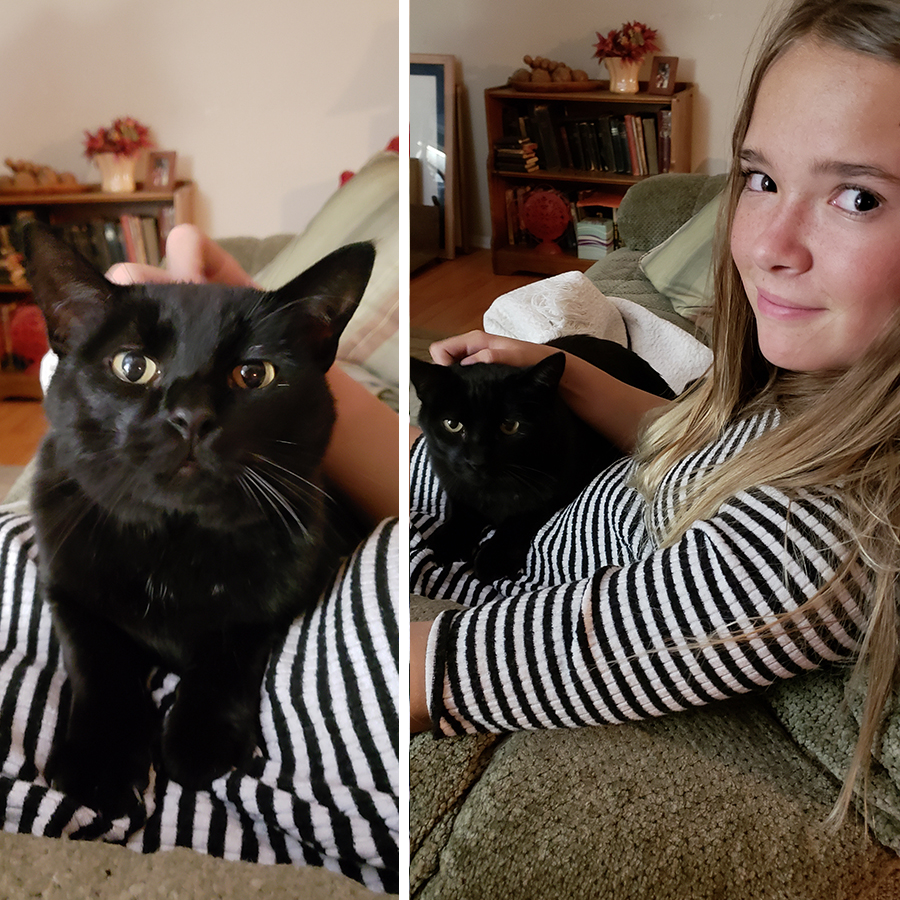 But the story doesn’t stop there! Oh no! There were spiders and a few mishaps with my mom’s dog that may have traumatized Joon who is not used to our ways in the sticks. Spiders and poop are not Joon’s cup of tea. They are not really mine or Bug’s either but we’ve been to this rodeo before and have grown a thicker skin.

My dad is away earning extra money driving a potato truck for some family in Idaho so my mom is left alone to take care of her animals by herself. This is all fine except my mom has a bad knee and she can’t take her dog out for the long walks her dog is accustomed to. Her dog is Miss Priss and doesn’t like to go outside in the yard and poop. She wants to go on long excursion walks to the special pooping place under a willow tree or on some nice grass up by the clubhouse. So you can see how some bad things might happen. My mom is at her wits end. Add some rain and her Miss Priss dog is even more uncooperative. My mom is literally pushing the dog outside by it’s rump and the dog is putting the breaks on with all four paws. It would be hilarious if it wasn’t so frustrating and sad for my mom.

It’s 11 o’clock at night, I’ve walked the dog to the special green grass at the clubhouse and I’m trying to settle the girls into their collapsing recliner beds. I’m soothing their spider phobias when suddenly I hear my mom call out for help from her covered patio. Guess what?! IT’S FLOODED. Of course it is. Because we don’t know what to do with rain and all the drains are plugged up with leaves and debris.  My mom is still in the process of unpacking so of course her covered patio is stacked with cardboard boxes that are now standing in three inches in water getting soggy.

You know what’s sad? I’ve been to this rodeo before too. My mom has had so many valuables ruined by flooding over the years (more a side effect of hoarding than weather) it’s sort of created a trigger for all of us. It’s almost midnight and there we are hauling boxes to her garage, wading through cold water in our pajamas. Good times!

I gotta hand it to my mom though. These things happen regularly so we just grin and bear it and think about how it will make a great story someday. 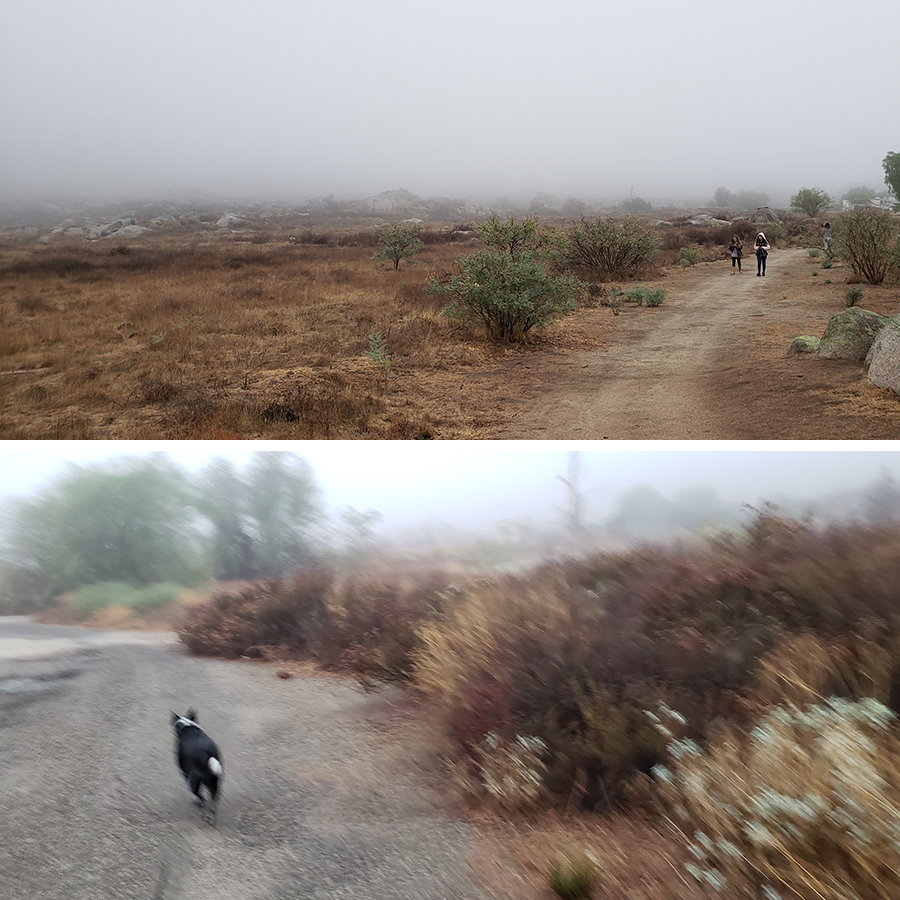 Somehow we all got over that and got a few hours of sleep. We woke up early and took the dog for a long excursion walk in the fog. It was so pretty. I think we all forgot about the trauma from the night before because now the weather was creating all kinds of dramatic instagram content for us. Win, win! 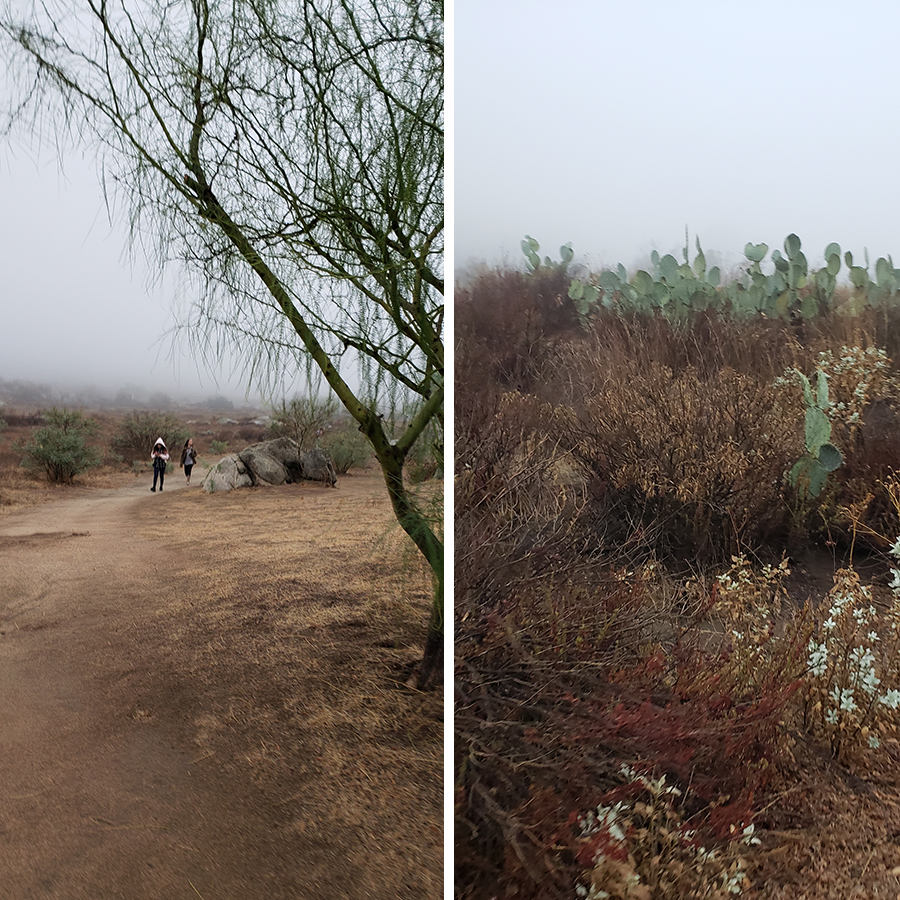 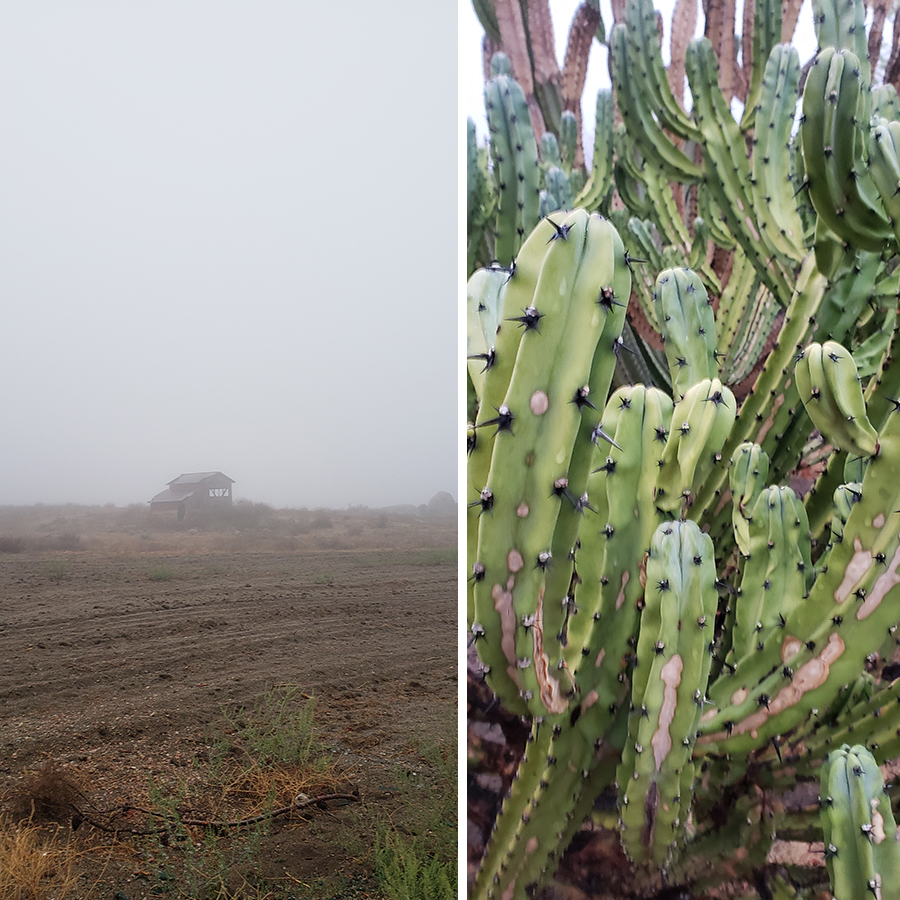 Then we went to breakfast at IHOP because we love that and headed off to the local hills to go apple picking! It was super foggy and a little treacherous but we made it. 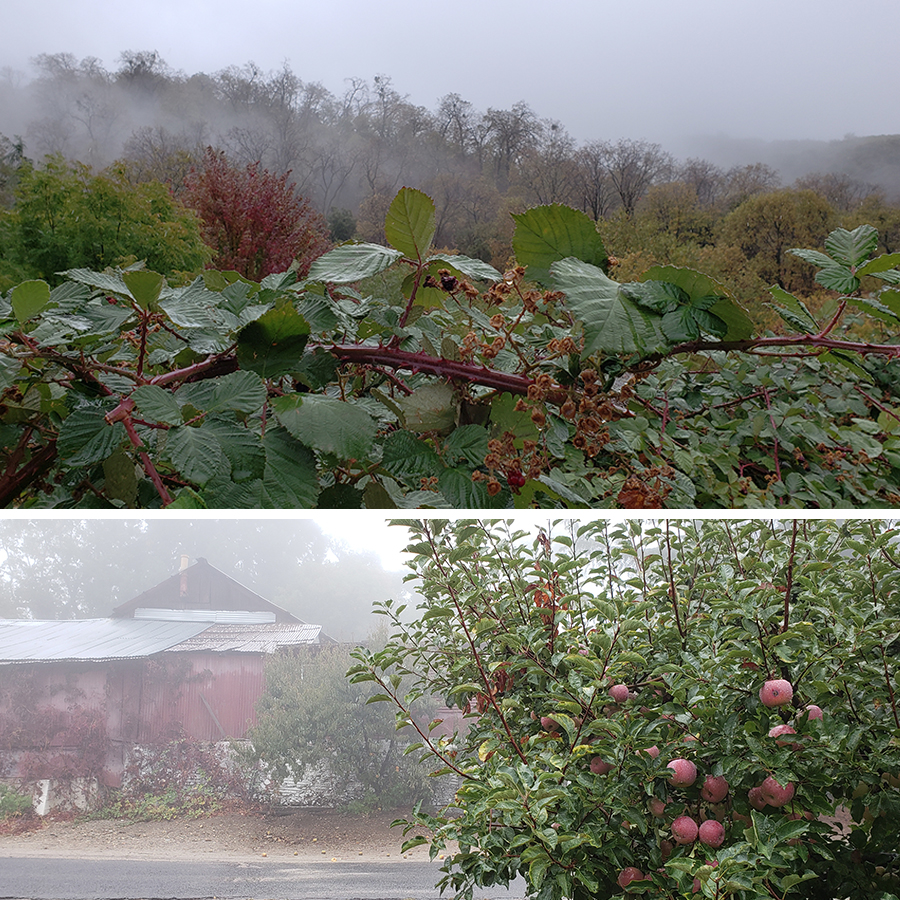 We were worried that the apple farms might be closed because it was still drizzling pretty hard. But they were open and they were magical because they weren’t super crowded with tourists like they usually are. In fact, now that I’ve been here in this “awful” weather I don’t think I can go back in any other kind of weather. Give me drizzle and fog any day over crowds of people and sunshine. 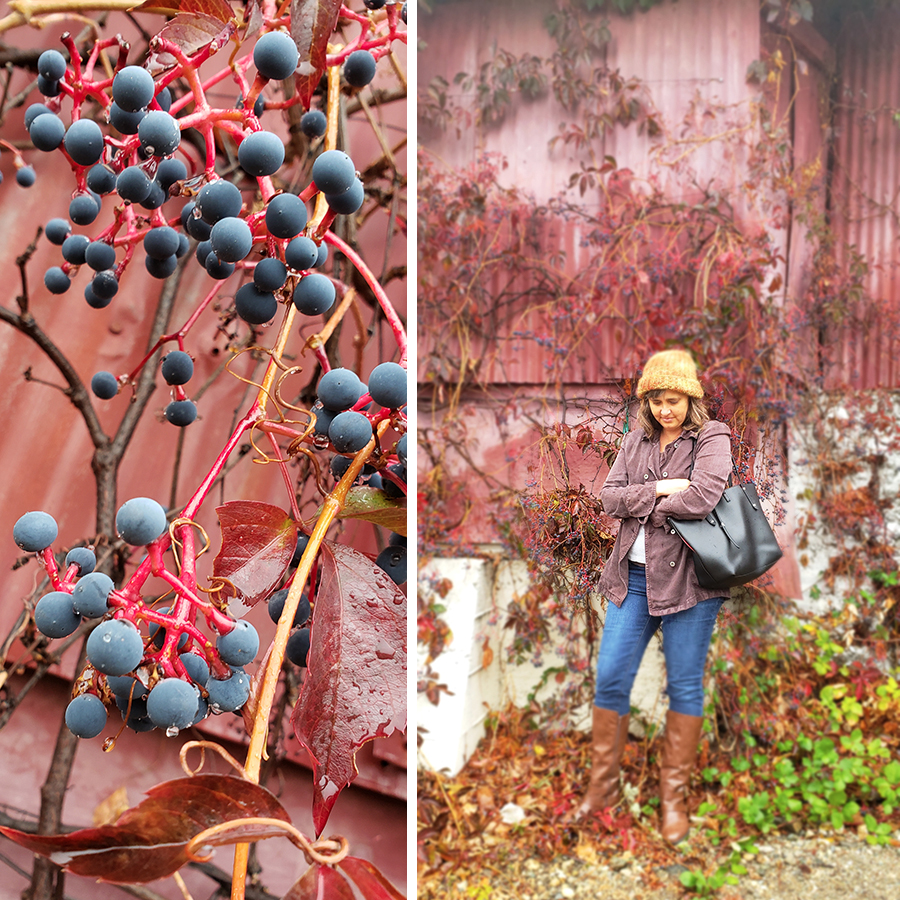 I mean, look at these photos! The secret on the top photo of me is that I accidentally left the *food* filter on my phone camera (which rocks by the way) and it made everything all orange and fall-ish looking. That’s why the blur is so extreme. But whatever, I’ll take it.

I hauled my big camera around in my purse all day but I didn’t take it out because it was raining all the time and we were kind of in a hurry to get out of the rain. Nobody thought ahead and packed a raincoat or an umbrella or anything. What are those anyway? We don’t even know what they are! 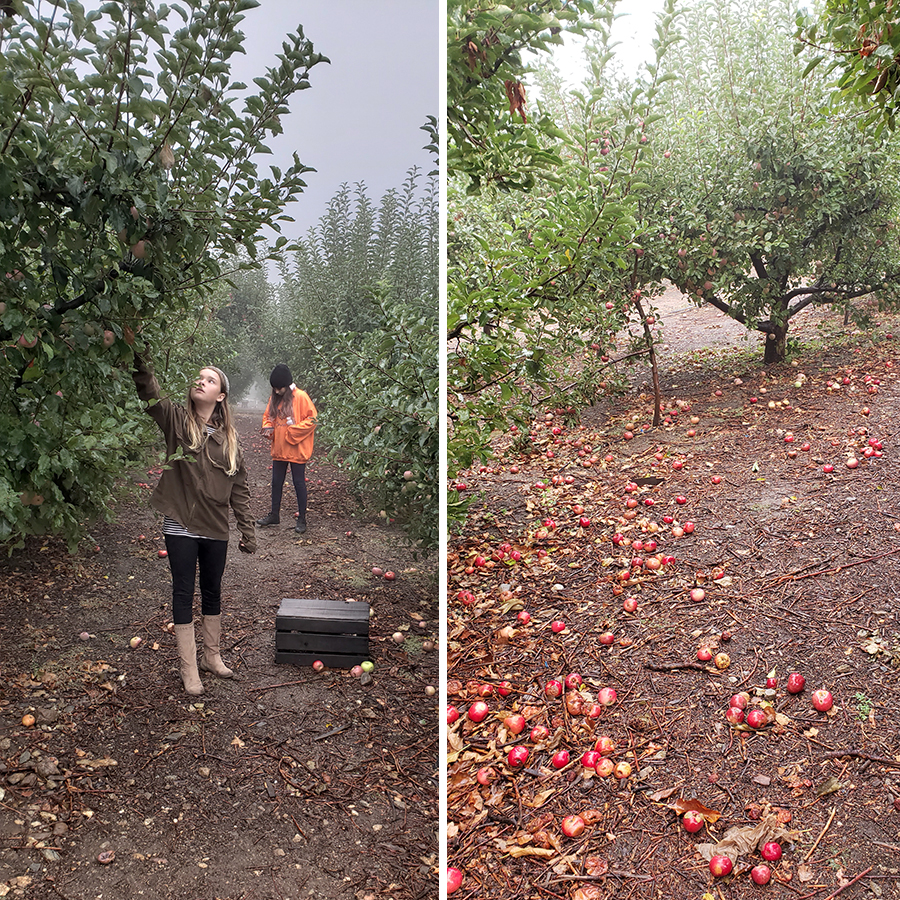 I really wish I would have set up a proper photoshoot though because this magical combination of colors and weather will probably never happen again. In fact I know it won’t. I have to move to Oregon or somewhere like that. 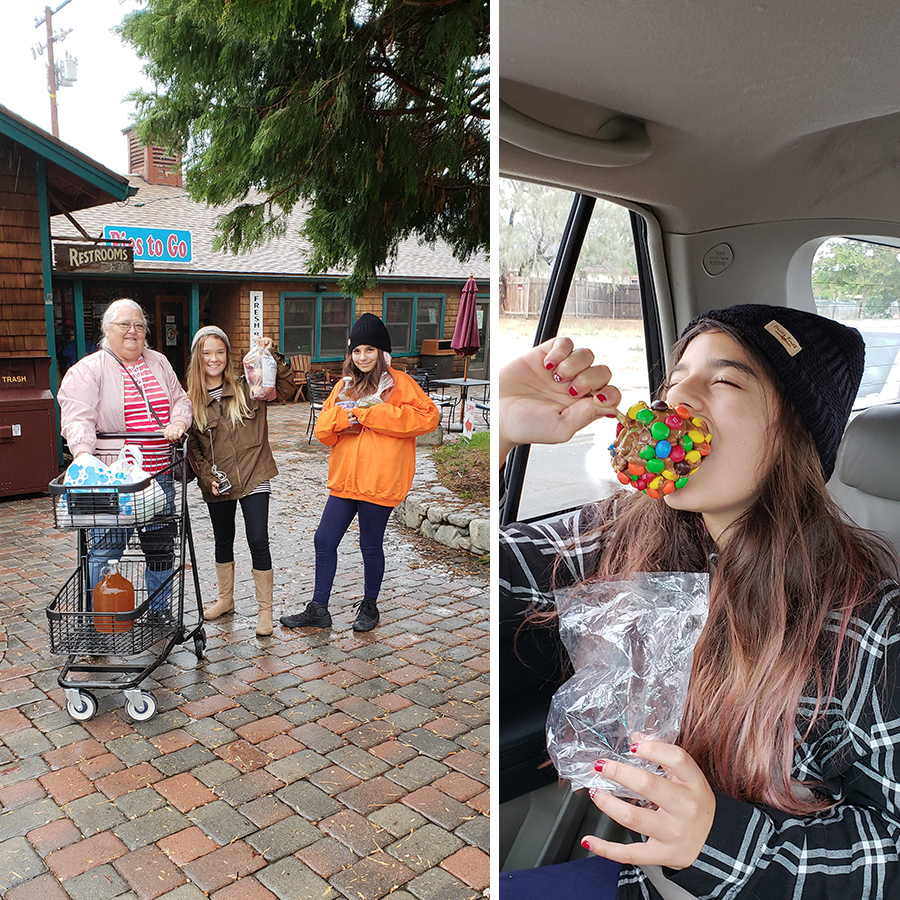 Long story short we had kind of an awesome weekend even though we sat in traffic for hours, we nearly got in a few wrecks, we sloshed around in water in our pajamas, we dealt with poop and spiders and tween-age angst…the list is so long. It should have been a very horrible no good weekend but it wasn’t! What doesn’t kill you makes you stronger, right?

OR maybe getting awesome photos for your social media far outweighs the crap of dealing with every day problems. I think if this had happened back in 1980-something we would have groaned and complained and filed it away as an epic failure of a weekend but now in 2018 we look at a bunch of rosy, pretty pictures and call it an epic success! We remember what we want to, right?

I will say I am going to remember all the laughing and singing with the girls forever. I love these girls so much.  Of course we missed Payam and wished he could have come along too (he had work and somebody had to stay home with the dogs) but it was super sweet to have this time together. Especially since I am leaving for Italy today! 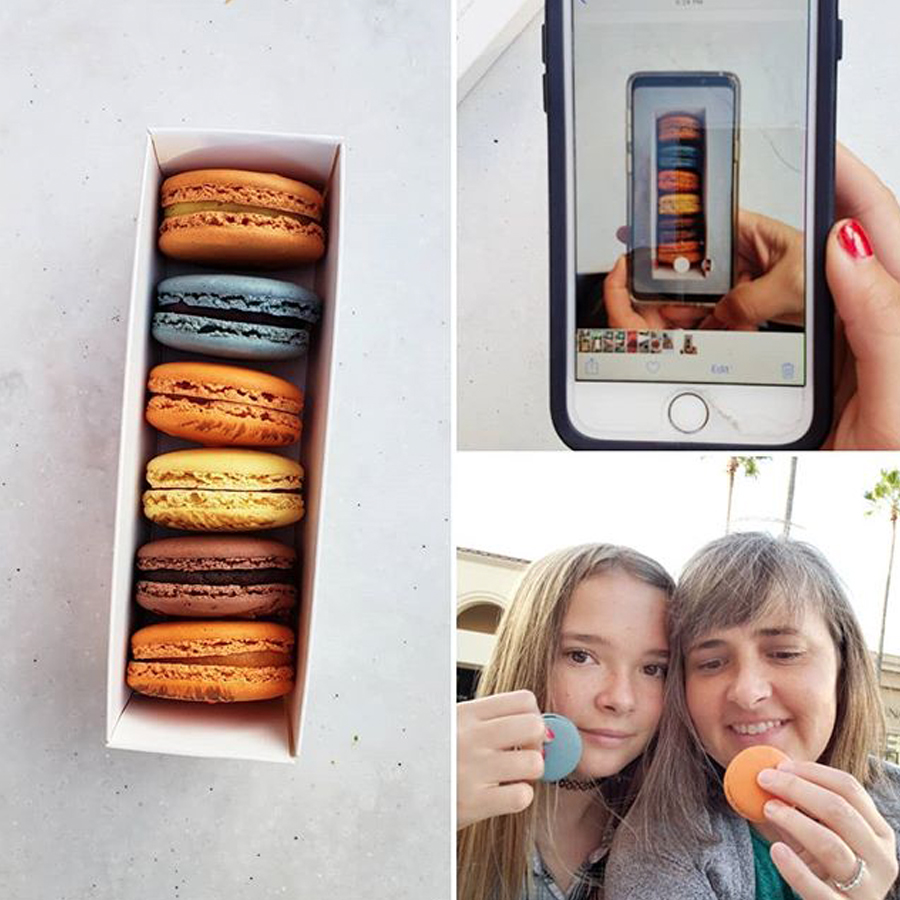 Every time I ask the girls what they want me to bring them back from Italy they say a plane ticket. They want to come with me so bad. We all have the travel bug since London and Wales. I want to save up to take Bug and Joon (and Payam!) to Paris on Bug’s 16th birthday. I always promised I’d take Rapunzel but I never could make it happen. Now I really have to make it happen.

I should wrap this post up here because it feels like the end but I wanted to share about the new app that Bug accidentally spent ninety-nine dollars on. That was another part of our horrible, no-good, apple-picking weekend. We were bumping along on that mountain road and Bug asks me if she can download this really cool cinemagraph app. I’m driving and dealing with people slamming on their breaks in front of me and causing wrecks so I’m only half paying attention to her. But I’ve seen those photos that are part moving gif and part still photo so I tell her to go ahead and spend the $9.99. It seems like a pretty good deal to me.

I can’t figure out how to embed the picture right now but click here to see what it does. Really neat, right?

Then I get an email on my phone, that I look at even though I’m driving, and it says that iTunes has charged me $99 for a year subscription to Cinemagraph. Not the $9.99 that Bug said it was. What?!!  OOPS x 1000.  This is what I get for driving in weather and traffic and approving apps without paying attention.

The girls figure out a way to share the app on their two phones and spend the next hour or so making the coolest moving pictures ever and my anger fades. In fact, I love this app and I’m super bummed that I can’t use it on my Samsung phone! The girls have promised to edit photos for me and I think I will take them up on it. In fact I know I will.

And that is the end of my terrible no-good apple picking weekend. Not too terrible after all!