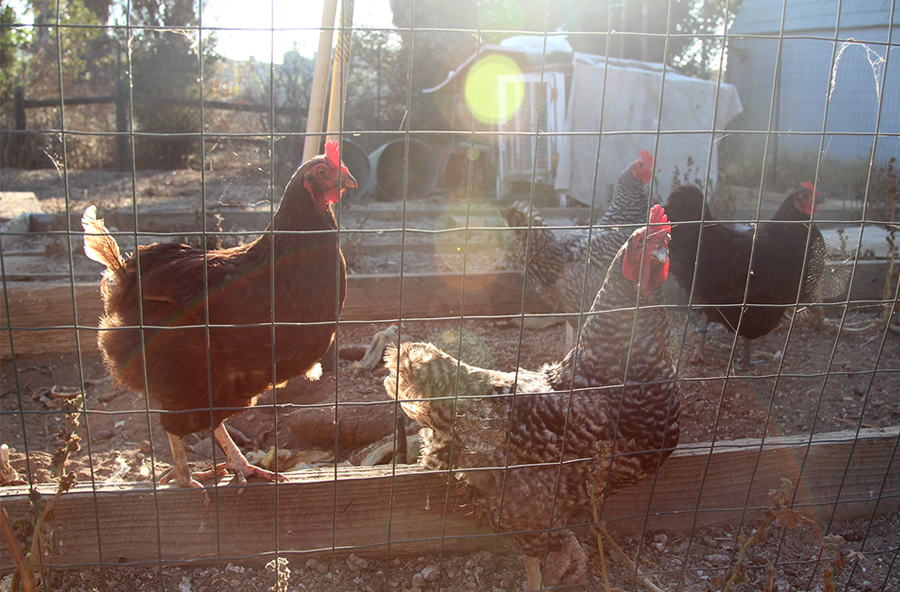 My friends, The Blues, are back in town from Thailand where they live now and work with the Charis Project. You probably remember them from this post and the Narnia birthday party (that was so cool!) and this post and that post…so many posts over the years! They are those kinds of friends, you know? The ones who were there for you for so many adventures, for so many sleepovers when you needed a place to stay, for that cup of chai and conversation when your heart was heavy…. Those friends. They are very special to Bug and me because they were a big part of our life when it was very tumultuous. 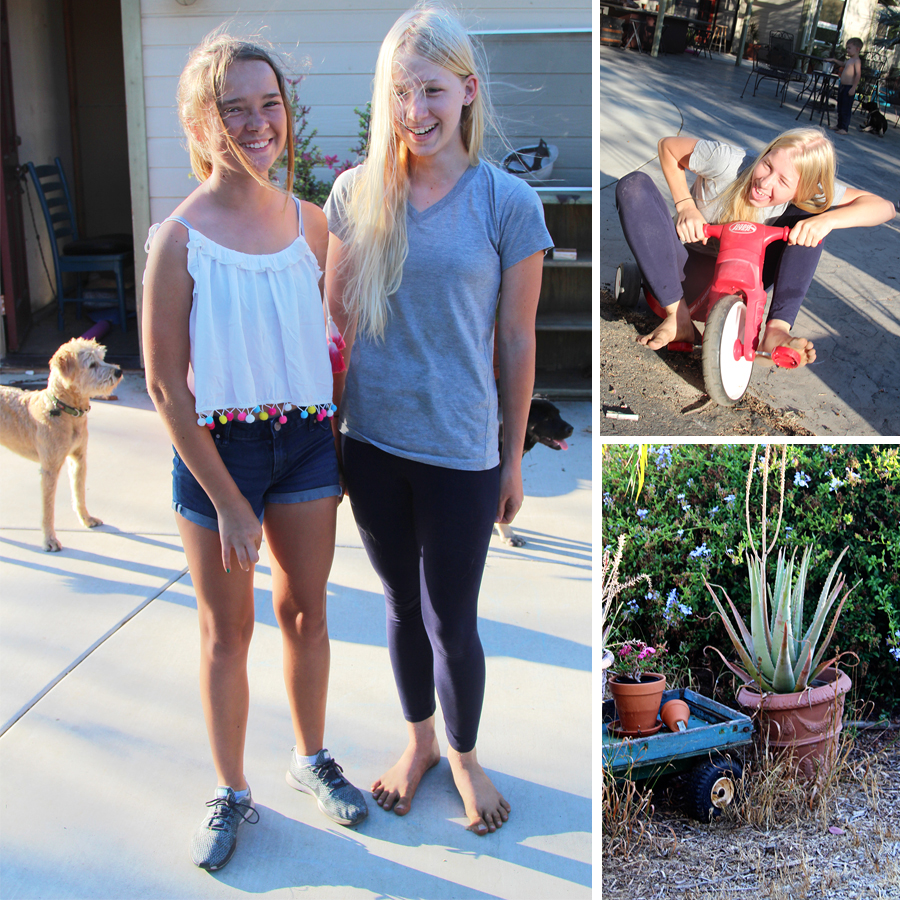 But we haven’t seen them in years! Everyone has grown up so much! Bug was actually really nervous about seeing her friends again because she’s had a couple of experiences with old childhood friends changing and just not clicking at all. I was a little anxious for her too. But I shouldn’t have been! 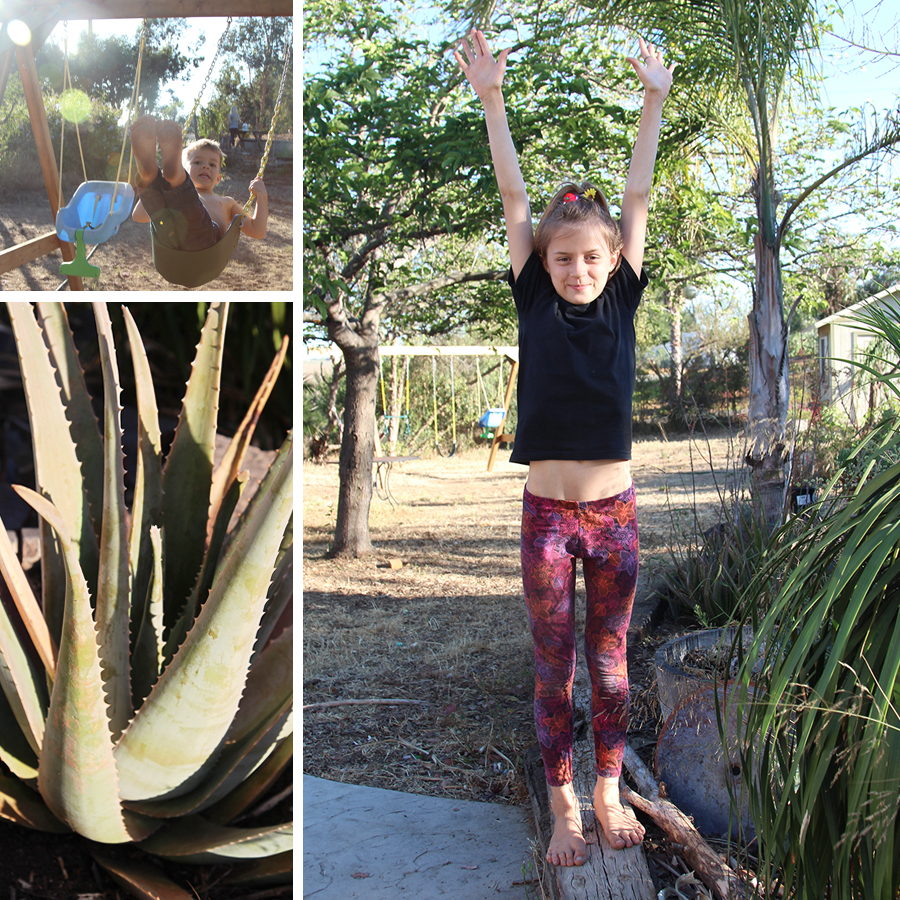 Everybody was exactly the same way they always were. I was so genuinely happy to see my old friends again.  It was like going back in time and feeling home and welcome. 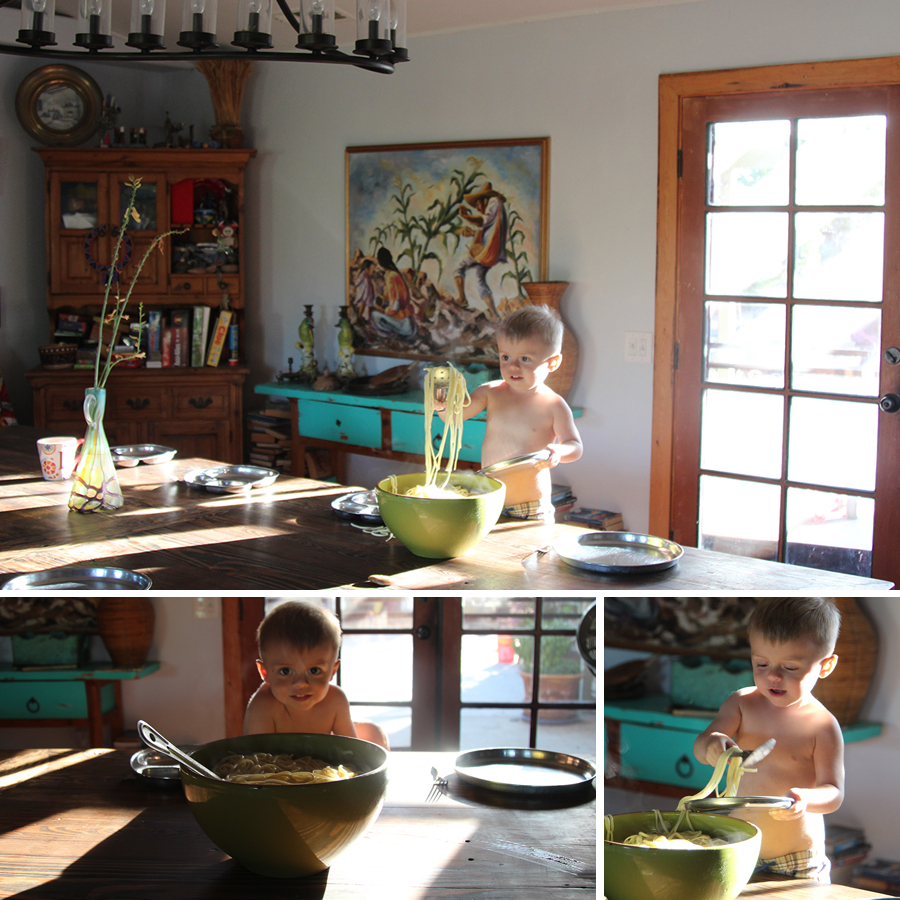 The first thing I saw was this little guy helping himself to pasta. Have you ever seen such a self-assured little person? What is he, like two?!  There are six kids in Carrien’s family and when you get that many kids the little ones get more and more brazen about helping themselves. But what’s wrong with that, right? I only had one kid for a really long time and because I took care of everything ever, she’s now twelve and  still asks me to untie the double knots in her shoes. I’ve sort of created a monster. I should have had five more kids. It would have been a service to her. Just kidding. But having Joon around really helps. 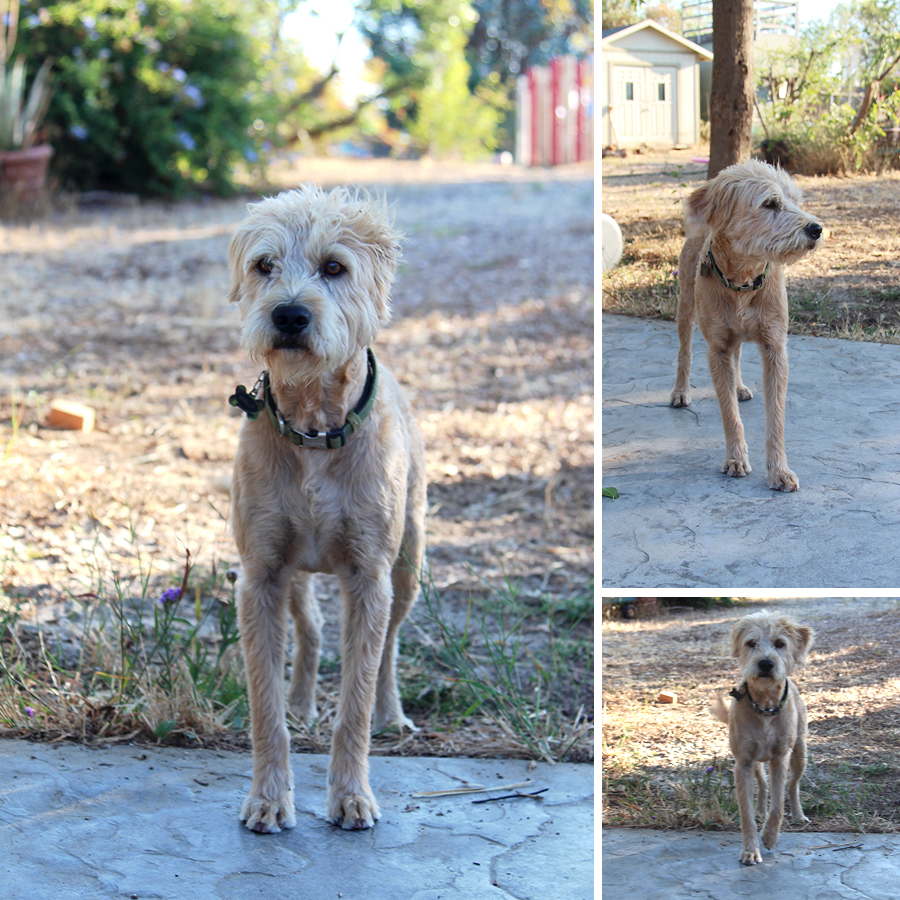 Then I saw this dog. We bonded right away. Apparently he’s very shy of everyone but since he looked a lot like Whiskey, I made contact and then he followed me around like I was his new friend. That happens to me with animals a lot. It’s like they know I have anxiety and need an extra dose of oxytocin.  I look in their eyes and they look in my eyes and we both feel a little bit better. 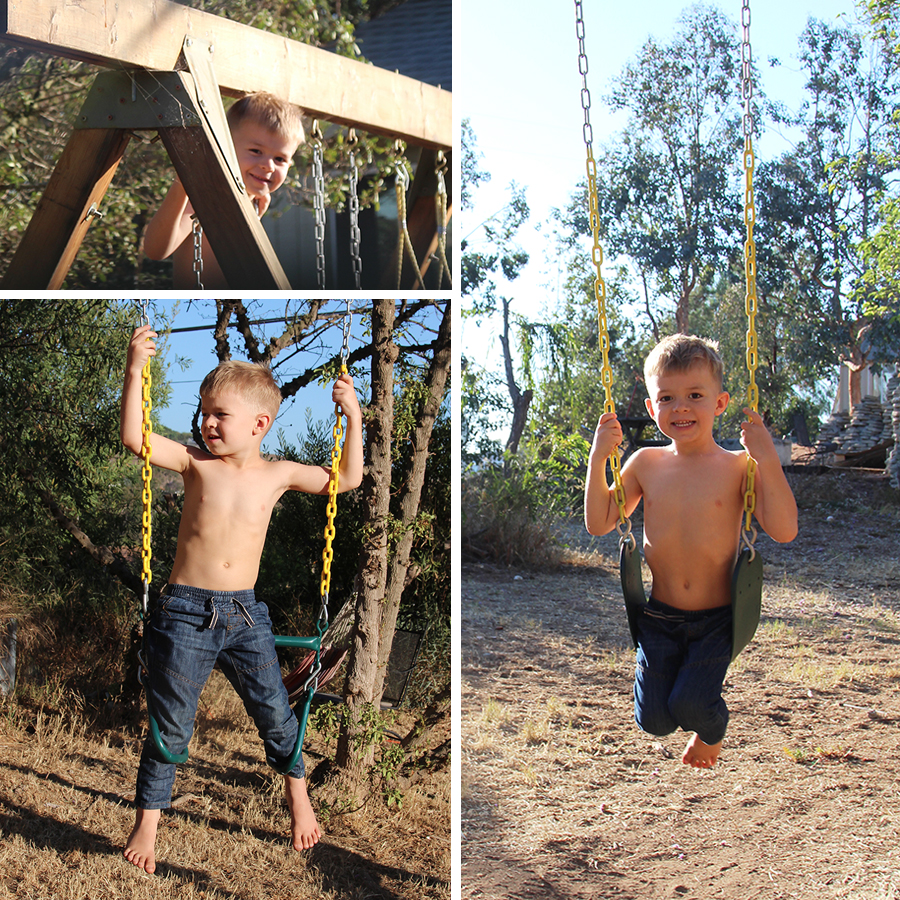 This kid is the most friendly of all the kids. I met him a few years back and he says he remembers me but I’m not so sure since he was only two then. It doesn’t matter because we acted like old friends who knew each other forever. He showed me all his tricks on the swing and I took pictures of his toes. No shy butterfly there. 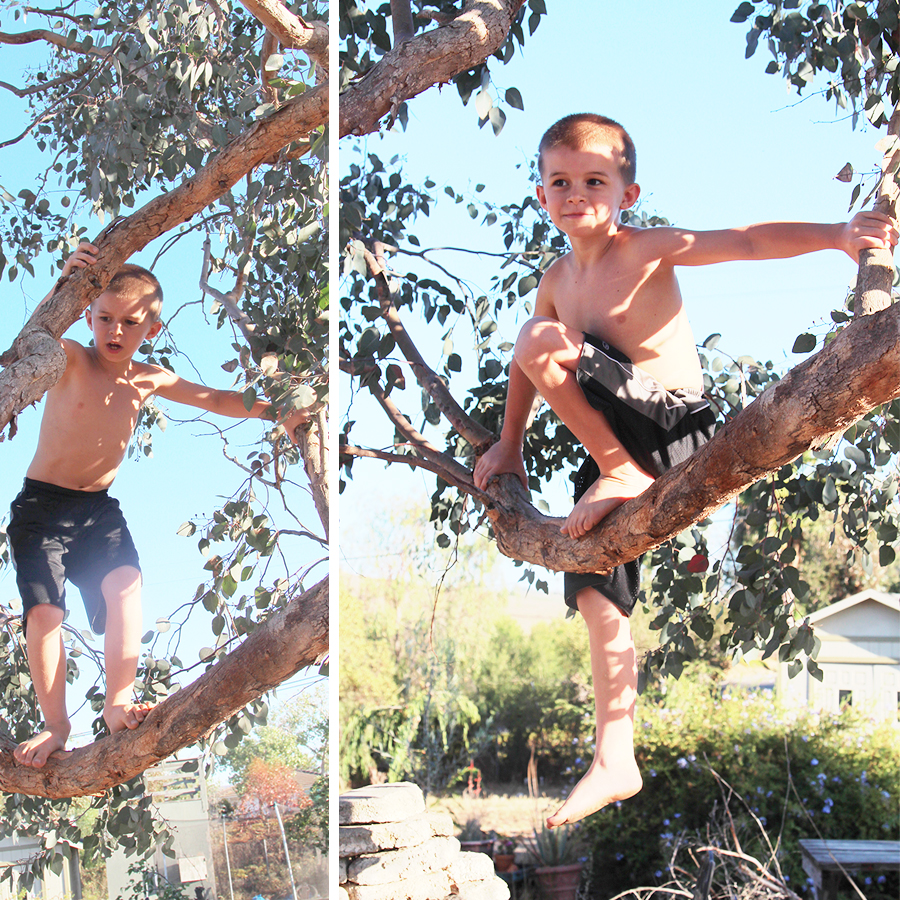 There was this monkey…he was so little when we last saw him. He talks now. Which is crazy because I always remember him as the quiet one. Quiet but smiley. 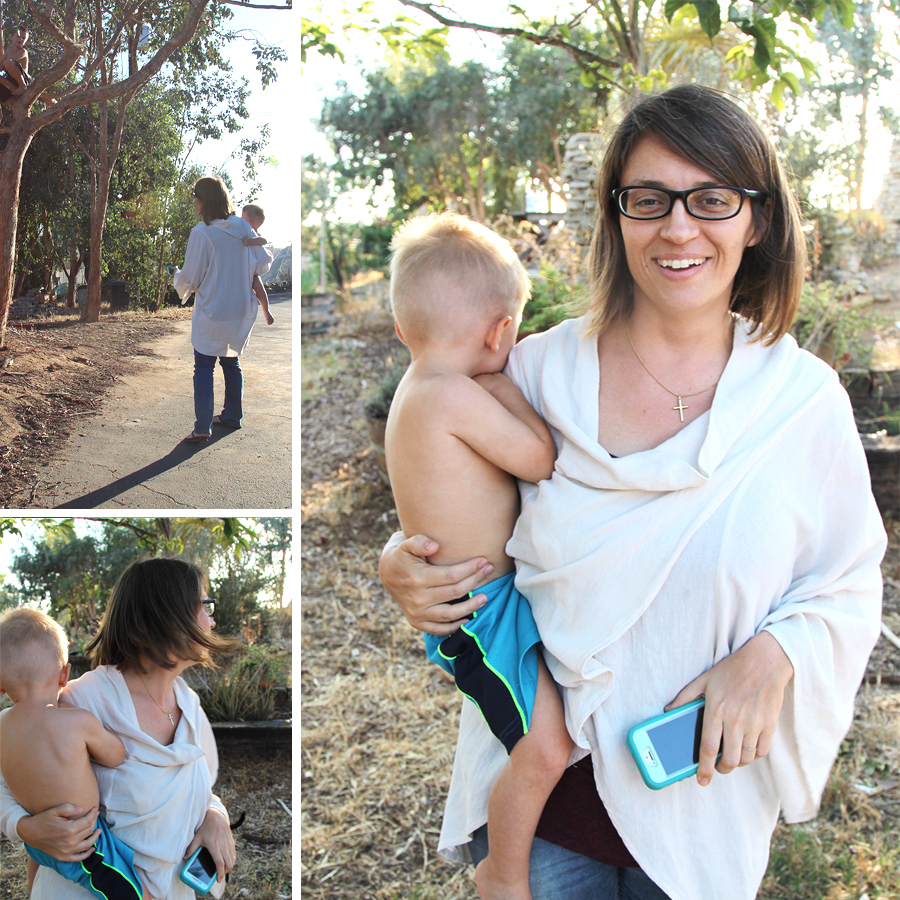 And of course my friend, Carrien. I love her so much. She’s probably not going to love these pictures of her because I snatched them with very little warning, if any. No “plandids” here. These are real candids. But I love that about her. I love that she doesn’t mind me taking pictures of her and her family “in the golden light.” She knows I love that time of day and it’s like giving an artist a paintbrush to be able to snap away. 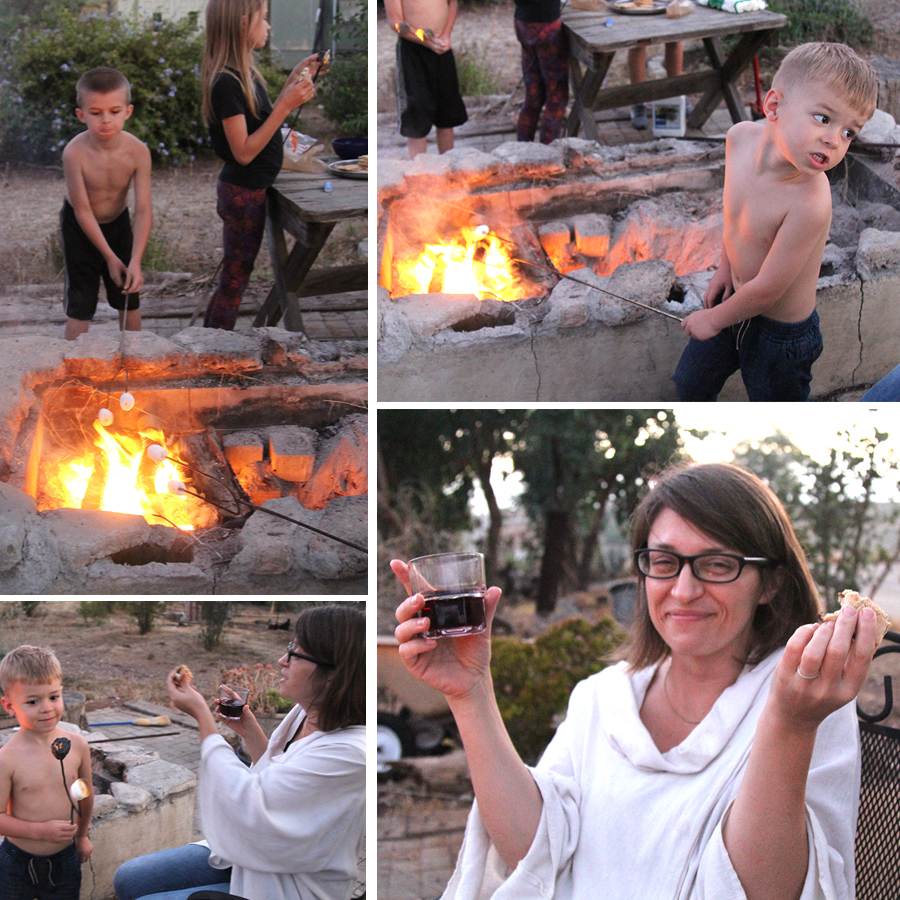 After dinner we had s’mores out by the famous big old rectangle fire pit. I love that fire pit!

And now I know the secret to good s’mores!!! It’s finally been revealed to me!  I was never really a big fan of s’mores before because they never really worked for me. You know how it is, you have a big gooey marshmallow all soft with a chunk of hard chocolate and a crumbly graham cracker. You bite in and it all falls apart. The chocolate doesn’t melt, the cracker is in crumbs and pretty much you have a mess.

Guess what the secret is: CUT UP THE CHOCOLATE INTO LITTLE SHARDS!!!

What? What!! Seriously. This solves everything. The chocolate melts, the marshmallow oozes, the graham cracker holds it all together. How have I not known this all my life?!!  And it totally tastes delicious! Now I get what all the hullabaloo is about. I like s’mores now too! Ding Dong! 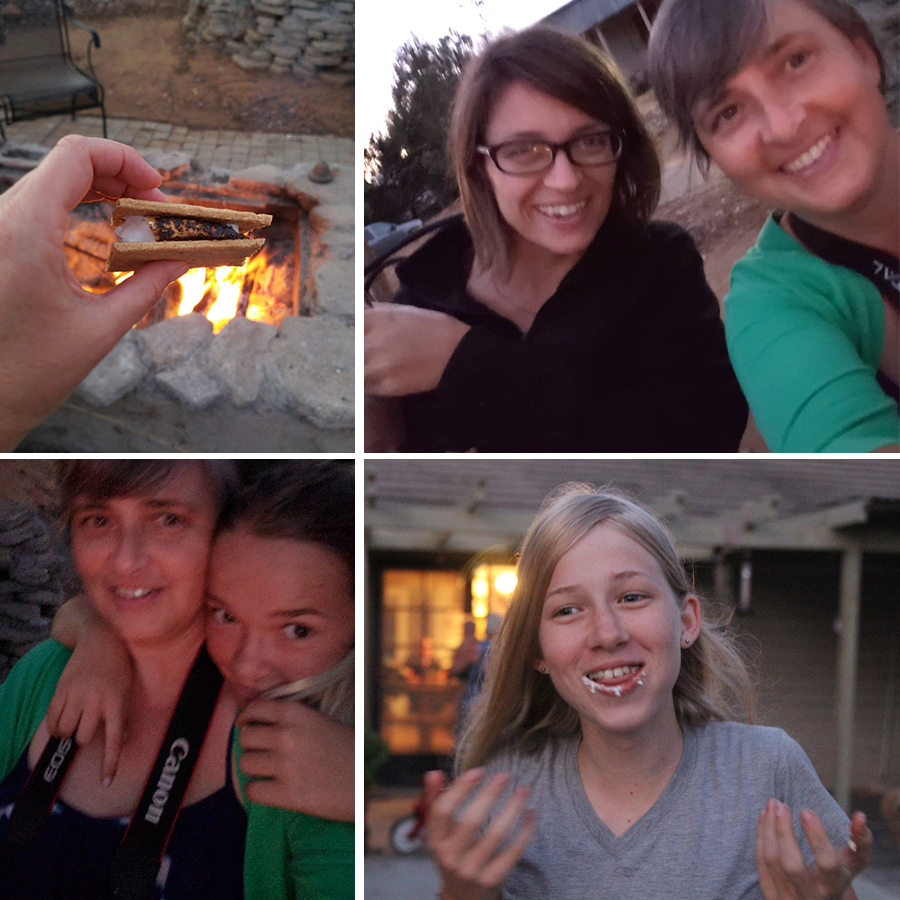 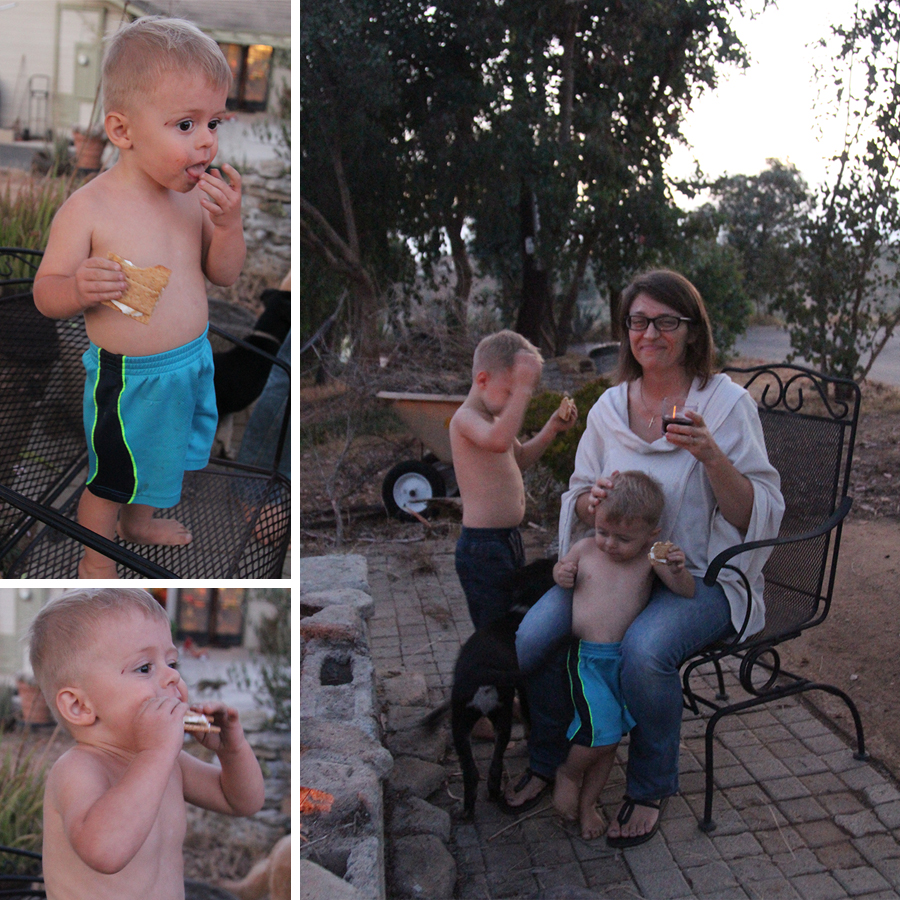 This is what I love about Carrien and her family: I love the effortless enjoyment of simple things. Just a fire and chocolate and marshmallows and graham crackers and a little glass of wine and my heart was bursting with contentment.  Both Carrien and I have had to make do a time or two with less money than we’d like. Things get hard sometimes but she’s the one who always invited me over no matter what was in her cupboards. She always served me treats made with the simplest of ingredients and they tasted a thousand times better than anything. Isn’t that weird how that happens?

I know sometimes in the past I had neighbors come over and I worried that I wouldn’t have enough food. And then somehow when my table was filled with faces, one chicken breast would magically stretch to feed six people and there was always enough. How does that happen!? Is it a miracle? Five fishes feeding five thousand? I don’t know. I think everyone takes a little less because they know they are really there to feed their heart.  I think that is the most valuable lesson I’ve learned about food and friends. We are really there to feed our hearts. Let our tables be large… 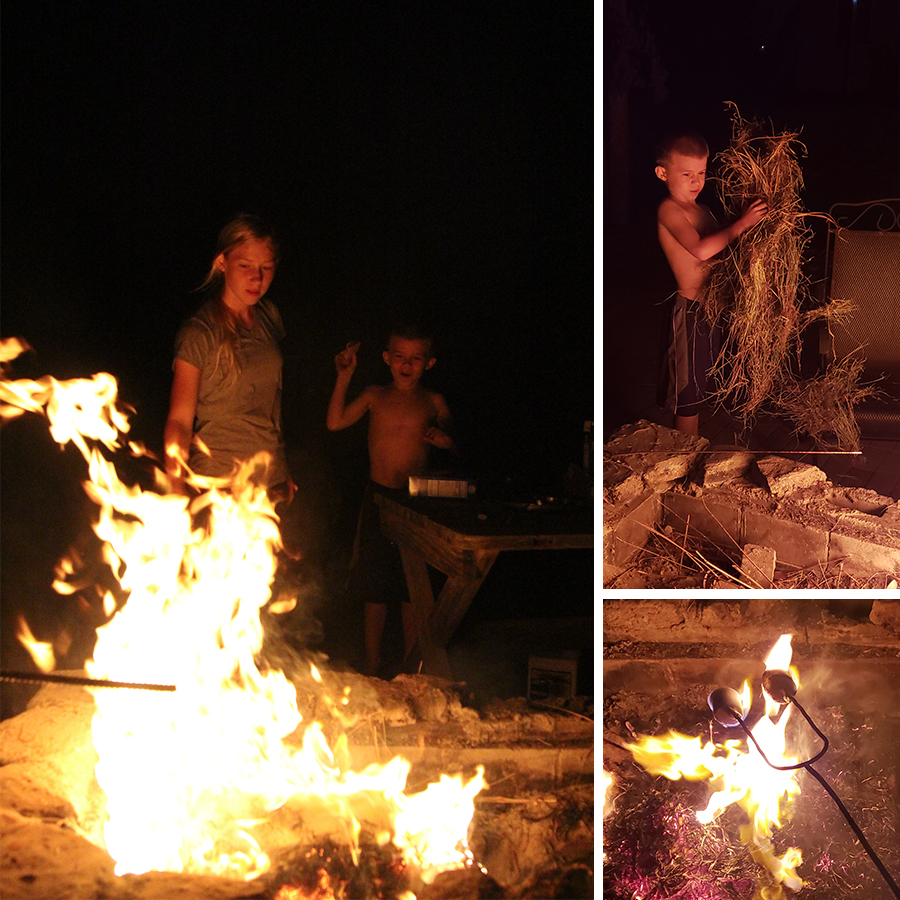 I miss them already. We were only there for a few hours but the fireside memories will last me for a long time. I love that Bug has memories like this stored up too. It’s so important to keep in touch with old friends. What do they say? The friends you keep for longer than five years last forever? 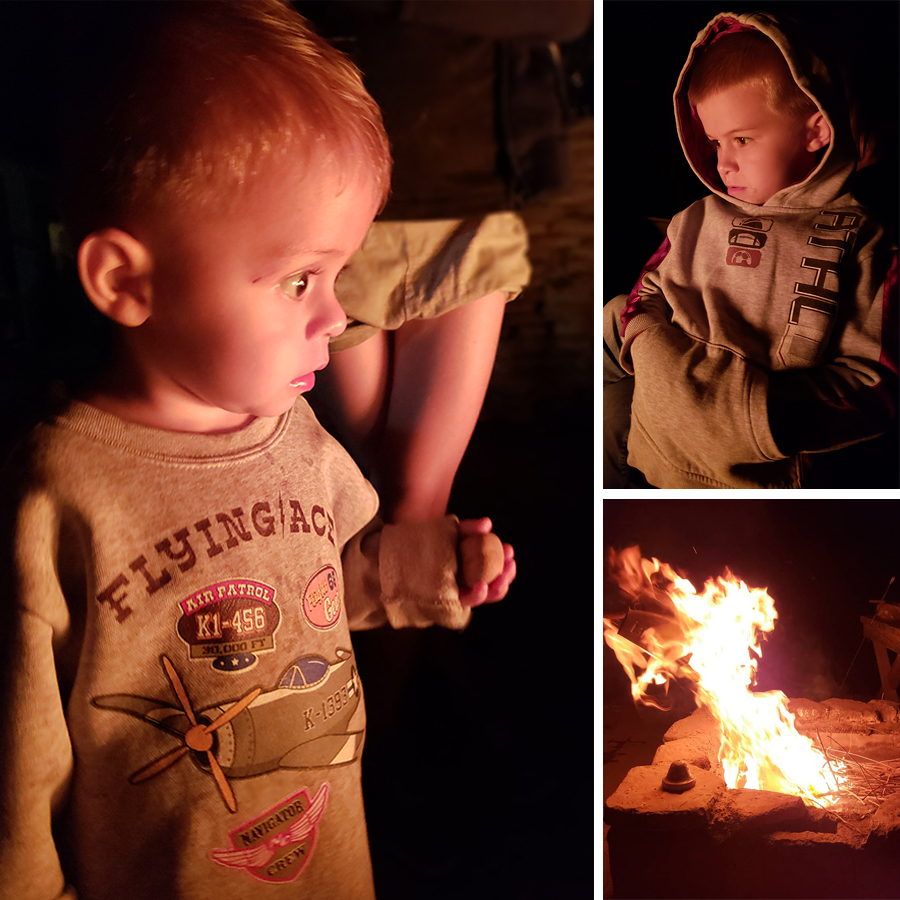 Eventually I had to start thinking about the long drive home. It was late and I am not the best person to be driving late at night because I am a morning person to the core. I hate trying to stay awake when I am tired. It’s pure torture. 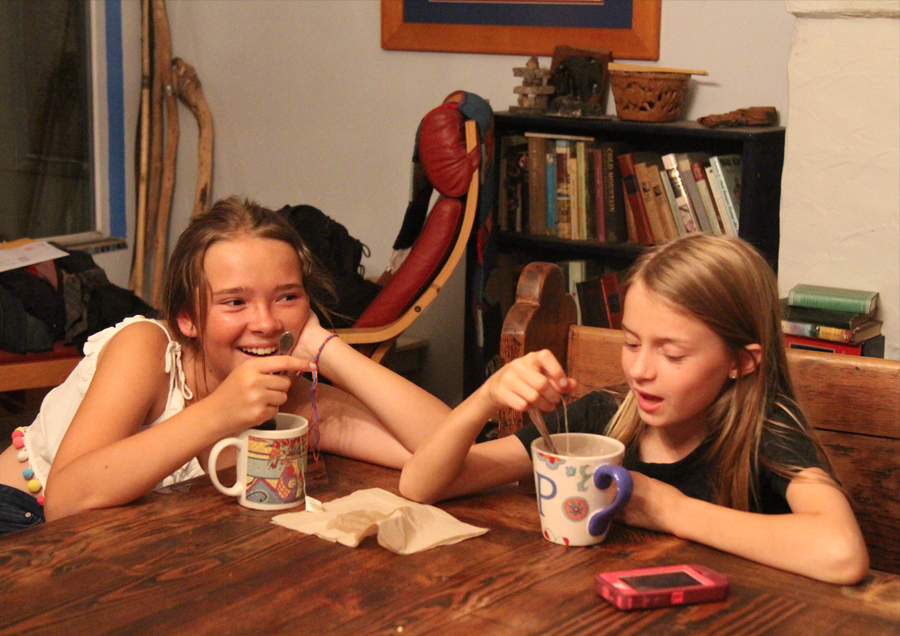 We hustled the littles inside and we saw this: The next generation of chai and conversation. No “not clicking” here. We can be oceans apart but we’ll stay friends. Because old friends are the best friends. Miss you guys!