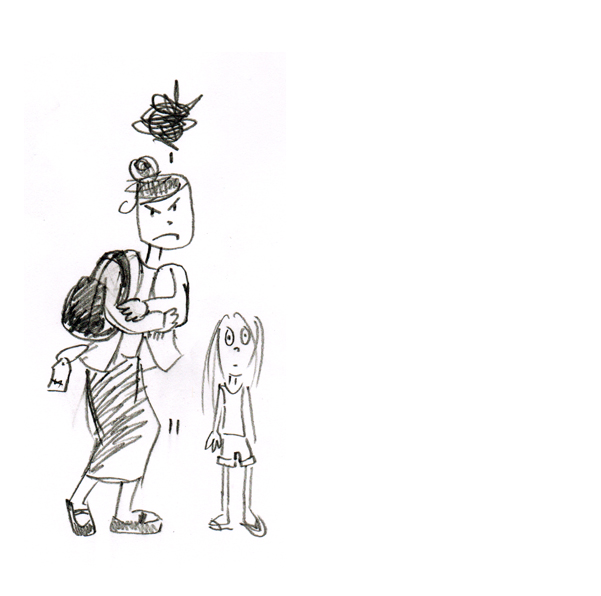 Yesterday was a pretty bad day for Bug and I. We regularly get on each other’s nerves but yesterday was really bad.  I admit I am fully responsible for my 50 percent of yesterday’s catastrophes. We had many blow-ups and many tears and many hugs and all’s relatively well in the end. In fact, we fell asleep hugging each other so it can’t be all that bad.

Being a mom is hard! Being a kid is hard!  (insert pathetic moan)

Being a mom to an only kid who is spoiled rotten because she has the full attention of her heliocoptering single-parenting mom who is desperately trying not to over-parent or under-parent or over-compensate for all the crappy things that have happened etc etc etc… One minute I think I’ve created a monster out of my normal well-adjusted brilliant snowflake and the other minute I think I’m doing just fine and I can’t think of a single question to ask her teacher at this week’s parent teacher conference because we are all just finey fine fine.

So how did I end up storming out of an Old Navy with a stolen cashmere sweater on my arms yesterday? I’m not a shoplifter!  I swear!! What the hell?

It all started because I had my hopes up really high. I think all my rants start there. I was looking forward to an afternoon shopping with Bug, just the two of us. We’d hit a few shops, share a macaron at the local French bakery… It would be a special treat!

We never shop. I actually hate shopping. Shopping is not fun when you don’t have much money. I’d rather skip the malls and big box stores all together so I don’t even know what I’m missing out on. Plus, every time we go to Target we end up spending 75 more dollars than I expect so that’s just a danger-zone, mine-field that I try to avoid.

Between her very high standard of fashion that changes every five minutes and the fact that she’s been growing like a weed and wearing her clothes out like she’s on a rugby team or something, our morning get-ready-for-school routine has been a little stressful of late. It’s been painfully obvious that she needs a few things.

So shopping we must go.

Target turned out to be a bust. She didn’t like anything and the things she did like I could NOT stand. Seriously? Off-the shoulder shredded neon t-shirts that are thinner than my threadbare maternity nightgown that I refuse to stop wearing and show more skin than a bathing suit? I’m fine with that in summer when we’re hot and sweaty but not when it’s cold and she thinks jackets are for sissies.

Then there is the shoe situation. Bug is the size of a small toddler. She wears a size eleven shoe. That’s the size that most shoe companies still consider “infant”. All the shoes in her size have big bright hearts and flowers, they’re ridiculously pink and have straps on them because they are meant for bumbling toddlers who still like Dora the Explorer.

She doesn’t like Dora or Barbie or pink or hearts or flowers or pretty much anything at all that Selina Gomez wouldn’t wear.  She’s got some old black converse tennis shoes that she deems acceptable but of course Target didn’t have any of those in her size with shoe strings and not velcro.  So we padded around rejecting everything. It was a joyfest.

She loved the shoes in my section. But that did not solve any problems.

We left and went to Old Navy. By this time I was just thinking she had trouble visualizing how she could rock the kiddie shoes and make them cool. It’s all a matter of attitude and creativity, right?  Vans with little purple skulls could be wicked or sick or deuces or whatever it is the kids say these days.  Sequinned blue keds?  Surely, she could work them into her rockstar outfits?

But no, eye-rolling all around.

I feel so old. LIke a hundred years old.

I’m sure my mom is chuckling and mumbling something about me getting what I deserve. I know I was awful when I was fourteen but BUG IS SEVEN!!!

Bug is a fashion freak.

Fashion is important to Bug. She comes from a long line of picky fashionistas. After all, her dad is the one who could spend FOUR hours in a Banana Republic and not buy a single thing. And her paternal grandmother is the one who wouldn’t hear a thing you said but could notice a stray thread from across the room. I’m an artist, her dad’s an artist. Self expression is a way of life. etc etc etc…

She is who she is.

And that is about when I had had it up to here with Bug and her fashion sense and stormed out of the Old Navy with a borrowed sweater on my BODY.

It was cold! They always have the air conditioning cranked up to North Pole in Old Navy. I put it on the minute I walked in the store and I was totally going to buy it. I thought we’d leave with a few things but then all hell broke lose.

I needed a Mommy-time out.  I should have headed to the restroom or the dressing room or maybe even the maternity section to hide and count to five hundred in my head. But no, I stormed out! With Bug trailing right behind me.

I hate to be anticlimactic but once I was in the car and Bug was sniffling and putting her seatbelt on, I realized what I had done. So I walked back into the store, took the sweater off, tried to fold it back up neatly as I could with no retail training (I pretty much did an awful job) and put it back on the table where it came from.

I’m sure they were too busy looking up the phone number for CPS.