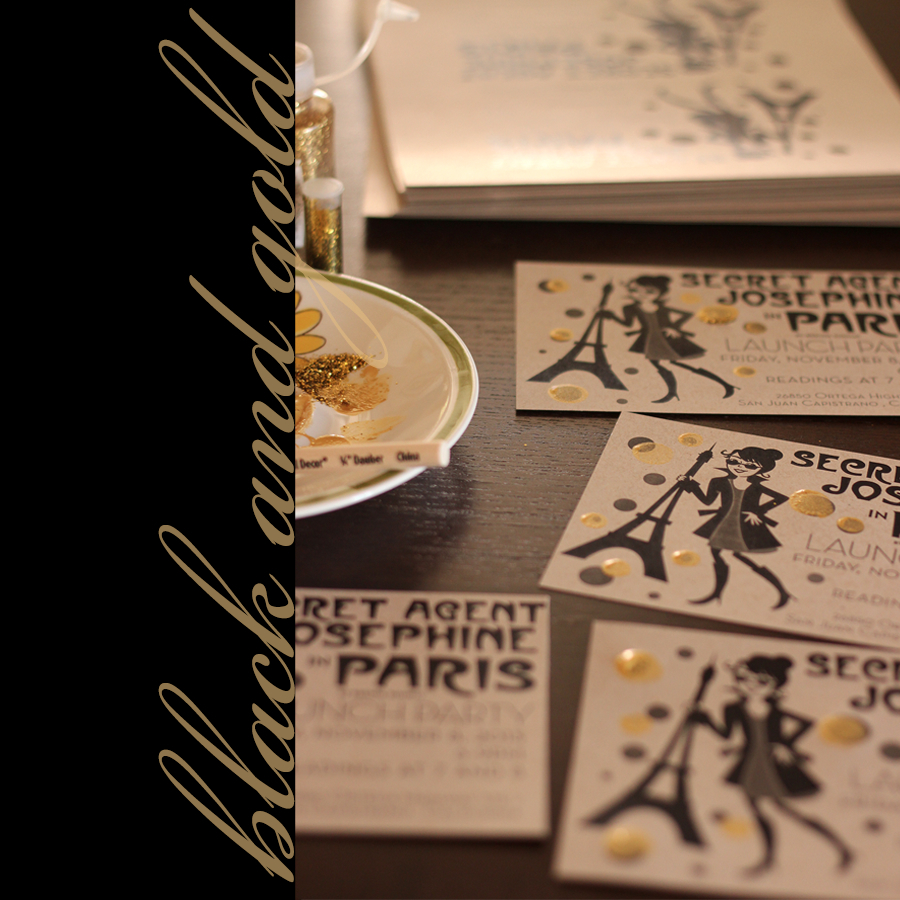 The other day Lubna and I made the invitations for my big launch party for my new book coming out on November 8th. I wanted to save costs so I had a friend with a black and white lazer printer print them out on some kraft card stock I bought at the local paper store. Then we hand painted them with round dabs of gold paint. And on a whim I spray painted the backside with gold paint. It was labor intensive but I’ve got more time than money so I’m really happy with it. I think the gold touches make it more glamorous than a bunch of black and white copies. 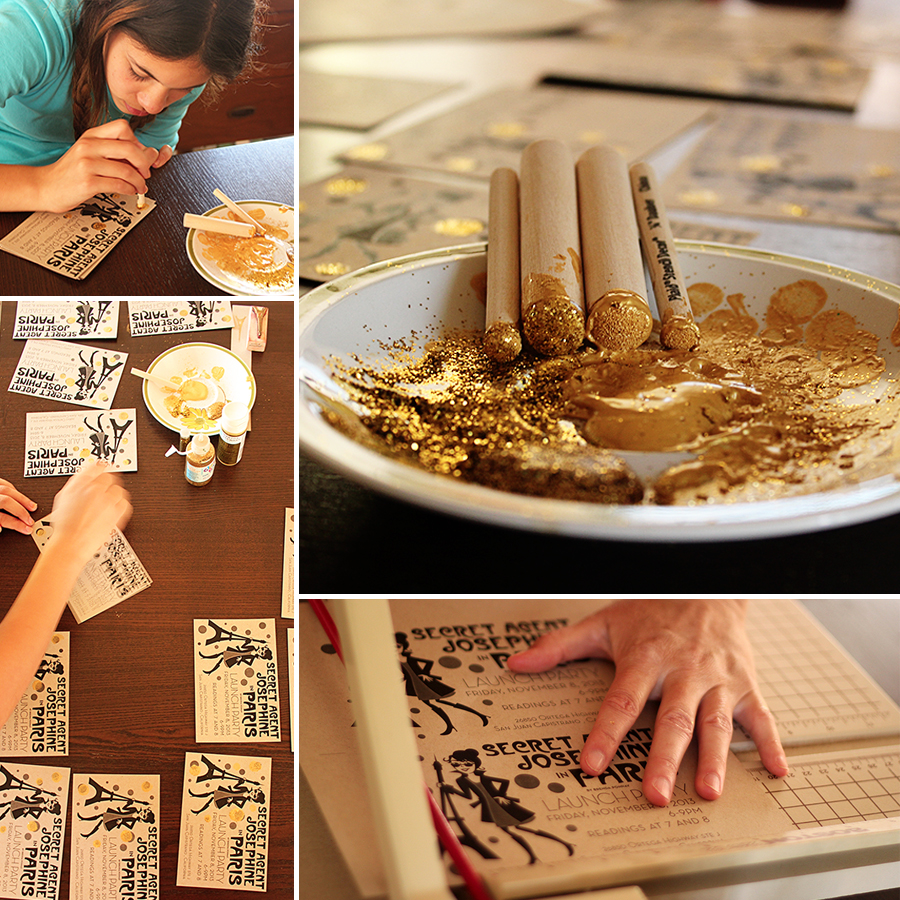 We had a lot of fun making them. I tell Lubna all the time that she is like my apprentice and I should be paying her. She shrugs. She loves to help. If I’m cleaning she will get out the vacuum cleaner and start vacuuming for me. She rearranges knic knacks on my shelves. She scrubs drips off my stove without asking me. Normally, that would bug me but I know she’s doing it because she really truly just loves to help. It would hurt her feelings if I made her stop. It’s been a real learning experience for me living next to my Iraqi neighbors.

In their country neighbors are family. Often they really are. Aunts, uncles, cousins…they all live together in a compound. That means that anyone can discipline your child because an aunt is as good as a mom, an uncle is as good as a dad. Everyone pitches in together because everyone is family.  You can have dinner at anyone’s house. You can come in unannounced at any hour of the day and plop yourself down on their couch for a long talk and some very strong tea.

At first this really caught me off guard. Lubna and her brother would just barge in during dinner and sit on my couch while we ate. Of course I invited them to join us and they did. Night after night after night. Sometimes I didn’t cook very much and I didn’t know how one chicken breast was going to stretch to feed four people. But it was okay. They took less. It was a little like the story of Jesus and the loaves and the fishes. There was magically always enough.

I admit it was a little wearing to this American who’s used to planning dinner parties months in advance.  But I learned. I learned that it worked both ways. They invited me to their house and I learned really quick that it’s rude not to accept. It’s a good thing I liked Iraqui food because they  invited me often and fed me a lot. And when I told them I was too busy to come over, Lubna’s mom, Raffa, would bring me over plates heaping with food. Nuts, candy, cookies. She always has an offering of some kind.  Bug wasn’t so thrilled with all the unfamiliar food but she’s learned a lot about loving her neighbors and manners.

Lubna’s dad always asks me if I want to buy a big house with him so that we can all live together. I laugh and tell him that is not possible because we would fight and I don’t want to fight. He laughs and nods his head.  It’s sort of an inside joke for us.  They fit five people into a one-bedroom apartment and I’m sure moving in with me and Bug in a great big house would be great. But I don’t think I could do it. I love my village but I still need my space. 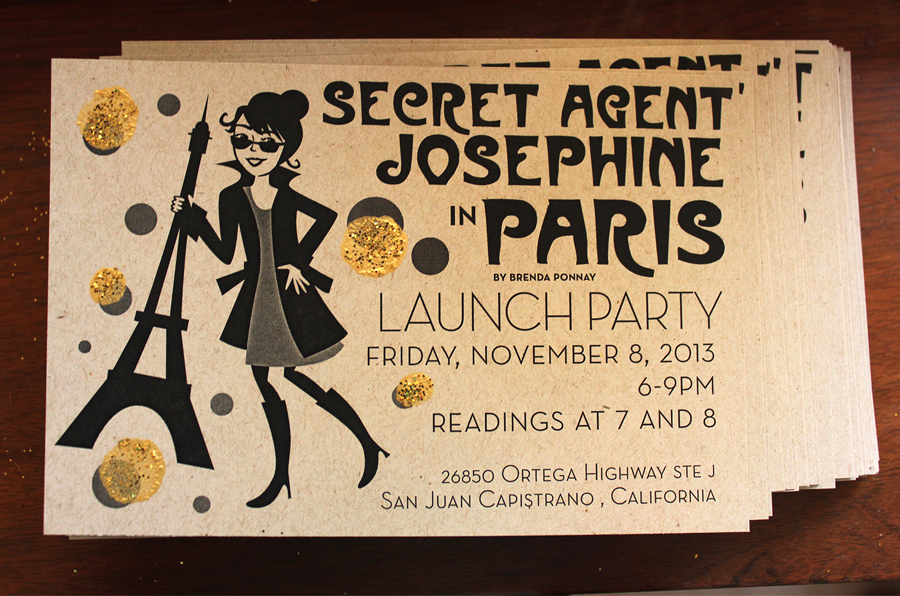 But this post is not about my Iraqi neighbors (or is it?), it’s about my big launch party and my fancy invites. Can you come? It would be great. It’s just going to be an open-house style party with two readings, light wine and cheese, macarons and madeleines…maybe a bottle of champagne. I’m still day dreaming about an accordion player but I’ll probably just put together a jamming French playlist instead. Who knows, maybe Raffa will break out a plate of seasoned rice and beef wrapped in grape leaves!  I’m pretty sure they’ll be there. After all, even a book launch takes a village.