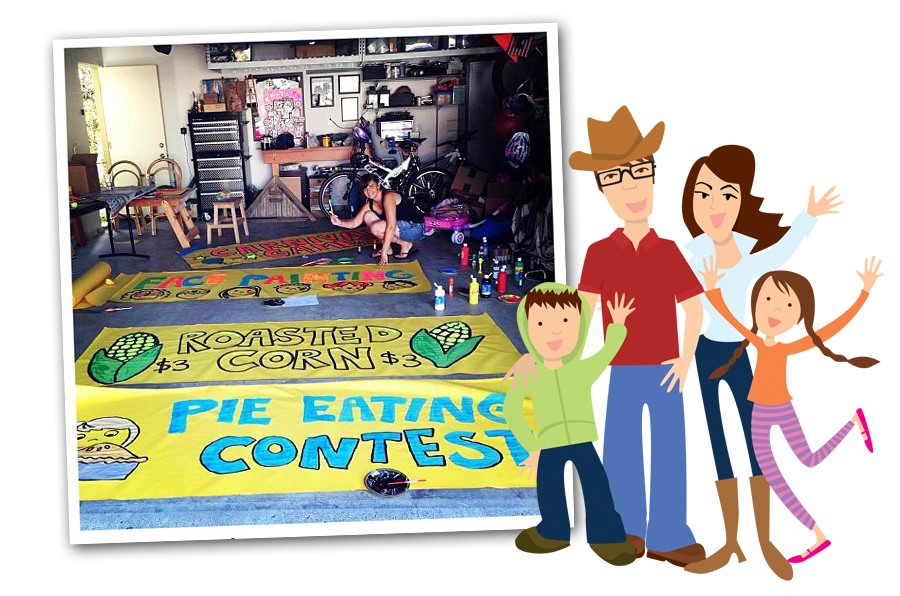 I’ve been doing a lot of artwork for the PTA at Bug’s school lately. I’m not complaining at all because they let me make pretty much whatever I want and they love everything I make. I swear, customers who get things for free are the best customers of all. They never complain about anything and they appreciate everything. Too bad they don’t pay the bills.

It’s been a blast. I’ve met a lot of new friends and I’m really feeling like I’m part of a community that could eventually lead to business contacts. In fact, several people have asked me about doing logos for them so maybe in the long run all my hard work might pay off. 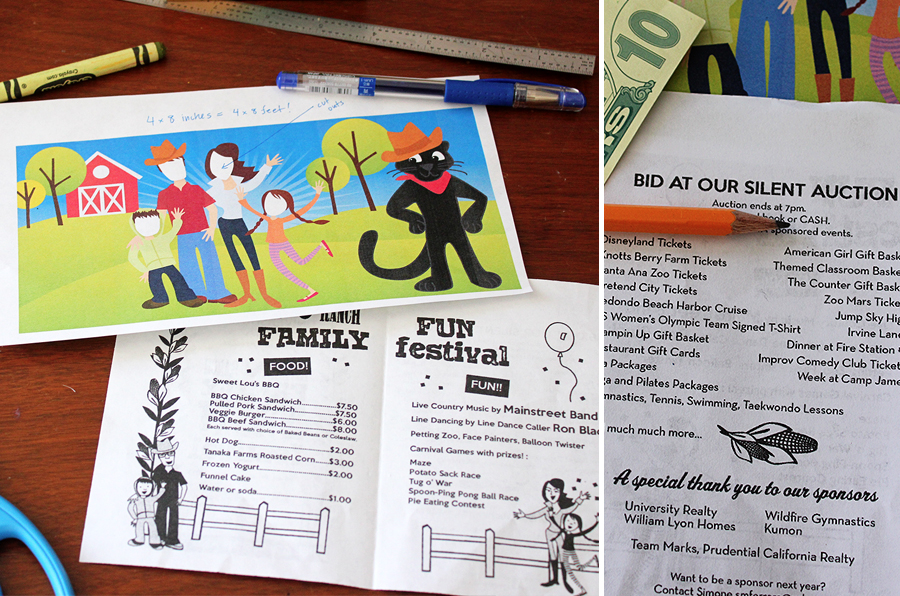 We’ve been working on putting together a Family Fun Festival coming up this next Friday (hit me up if you are local, you have to come!) and it’s been crazy. There are going to be so many fun things at this festival. A live band, line dancing (!), face painting (by moi and a few others), carnival games, pie-eating contests etc etc etc… I feel like I’m back in time and we are going to a real country fair except there are only a few parents doing everything and we’re all kind of scared because we’ve never actually done anything like this by ourselves. AND!! It’s all free. It’s not even a fund-raising event, which is crazy if you ask me. But nobody asked me. The food will cost a minimal amount and you can bid on a silent auction (which you should for the summer camp deals alone) but everything else is FREE. FREE!!

Do you live in Orange County? Email me. I’ll give you the deets.

So yesterday me and a bunch of moms painted all the banners for this event. It was super fun. I love painting signs. We painted for hours.

The only problem was: each mom came with at least one kid and the kids ran rampant. It was crazytown. Like a birthday party with no grown-ups. The only adult supervision was busy painting and we were having such a blast, we may not have been paying close attention to what the kids were doing.

Bug and several other kids decided it would be really fun to climb in and out of one of the mom’s cars, via the windows—sort of like the car was a giant jungle gym. All the windows were down and the doors were locked (or so we thought) and they were climbing in and out. I balked at first because my sister-in-law has this giant scar from a windshield-wiper-meets-shin incident when she was a kid and this has lead me to be of the absolutely-no-climbing-on-cars school of thought. But I’ve recently been thinking maybe I’m too uptight about things like this. The other moms were okay with it and the kids who had been whining for food were wonderfully occupied and happy with this new car-jungle-gym. So I let it go. Plus, we were right there in the open garage just feet away from the parked car.

I was painting happily away when suddenly, I heard blood-curdling screaming. I looked up and it was MY KID. I instantly turned into the hairiest, scariest Mama Bear you have ever scene. I think my paint brush went flying and I leaped over the still-wet posters in a single bound. Bug’s hand was in the door. I heard it close on her hand. It was a really tall car so she was hanging there by her hand and screaming. It was terrible!

I grabbed Bug and opened the door. I yelled, CAN YOU BEND YOUR FINGERS!! Through tears and screams she magically did. Her fingers all bent. Nothing was broken. I still cannot believe it. Every single finger was fine and could wiggle. How is this possible when her whole hand was in the door and I heard it close with that solid crunch sound that cars make when the door slams shut. It was a miracle.

We sat there for minutes just trying to figure out what happened. The only thing I can figure is that the car had a really big rubber lip and a pretty big cavity inside before the actual metal of the door met the inside of the door rim. Bug has some abrasions on her skin but no bruising, no breaking, not even any residual aching. She was shook up and crying a lot but she was fine.

We gave her some arnica and I let her sit and watch tv on my phone. She didn’t even want to go home, which was good because I still had three and a half posters to paint. Eventually she even went back to playing.

Later that night, when she was in bed, she complained about growing pains, in HER LEGS.

Her hand is fine. Absolutely fine. 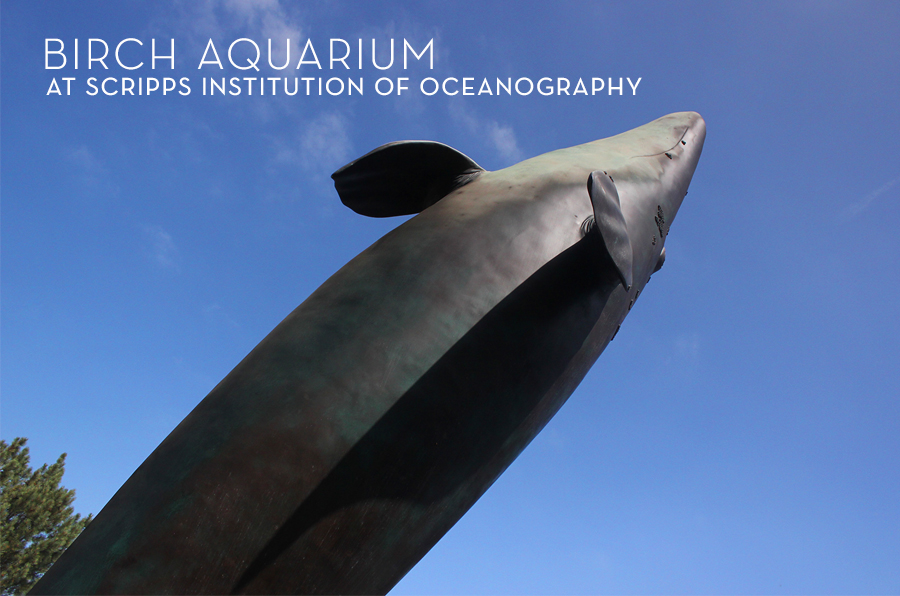 I don’t mean make my blog a “Things to do in Southern California with Kids” magazine or anything but lately these little trips are what I’ve bothered to take my camera out for. One of these days I’ll post about a craft or maybe I’ll post some printable stationery. I’ve been perking on that for a few days…who knows. Blogging is not my job. At least that is what I tell myself.

While you ponder that question I’ll just move onto posting some photos from the Birch Aquarium at Scripps Institution of Oceanography we visited this last weekend. 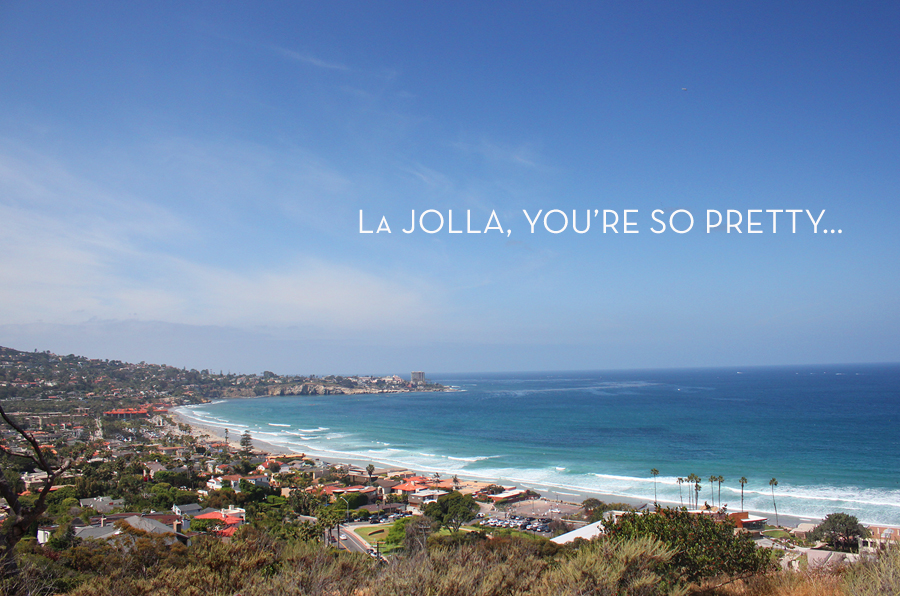 This place is so cool. It’s not as big as the Long Beach Aquarium but the location is so much prettier. I love La Jolla. I don’t mean to diss you, Long Beach. You’re much more affordable but these ocean views you just can’t beat. 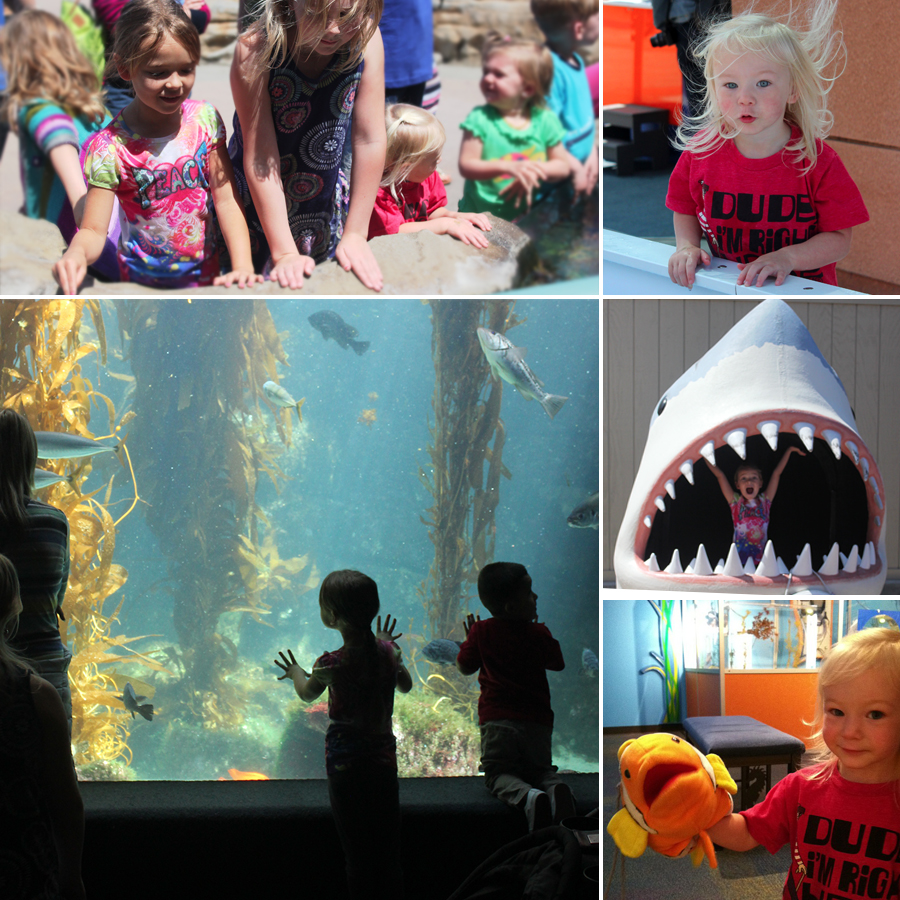 Like most aquariums there were tons of things for the kids to look at, touch and interact with. This really is the best kind of learning, when you can take it in with all your senses. 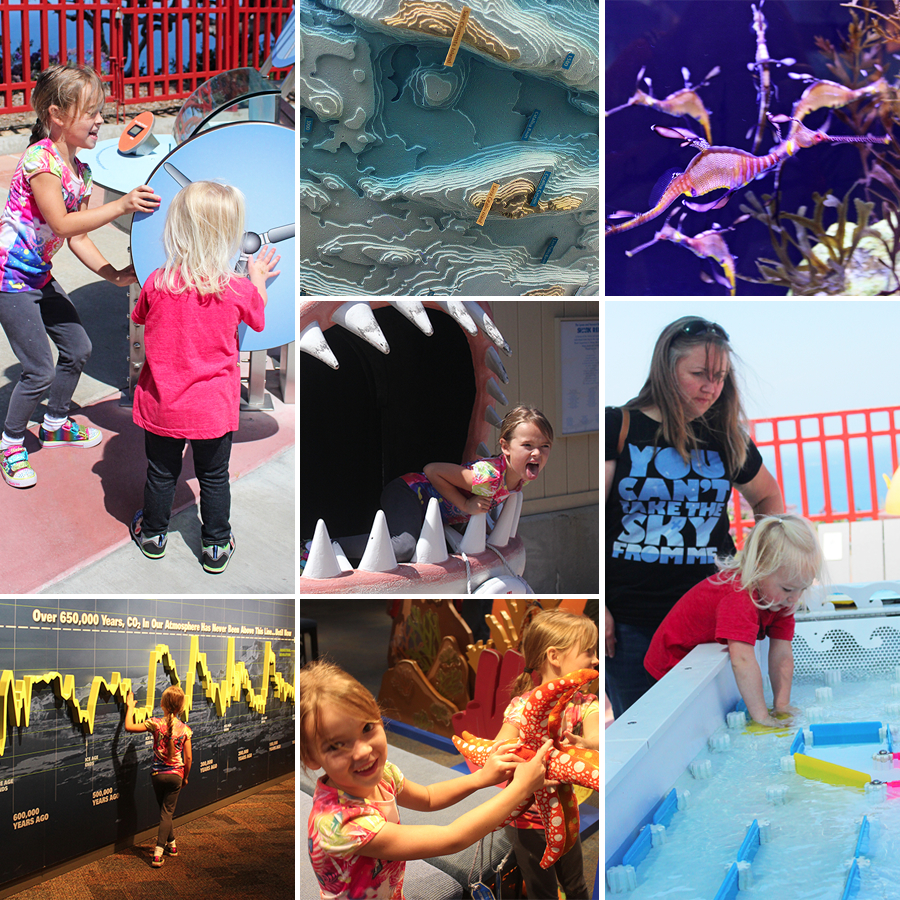 What’s funny is that we went with Bethany and her kids and Bug and Annalie learn in such different ways. Annalie likes to run ahead at full speed and throw herself into everything with enthusiasm, while Bug likes to meander along slowly and read every little plaque and ponder every little detail. Annalie was constantly (and politely I must add) calling Bug to catch up with her. I wanted to tell Annalie to slow down and wait for Bug but I realized that Bug loves Annalie and they sort of sling shot each other around and around. They are the best of pals and I think Bug would rather be coaxed along by Annalie any day than prodded by me. So I kept mum and watched them from afar. 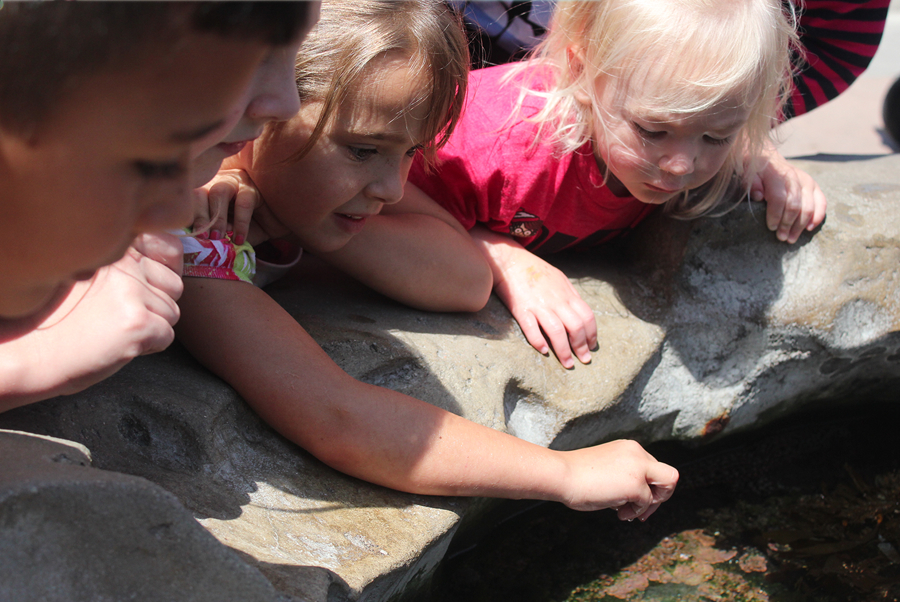 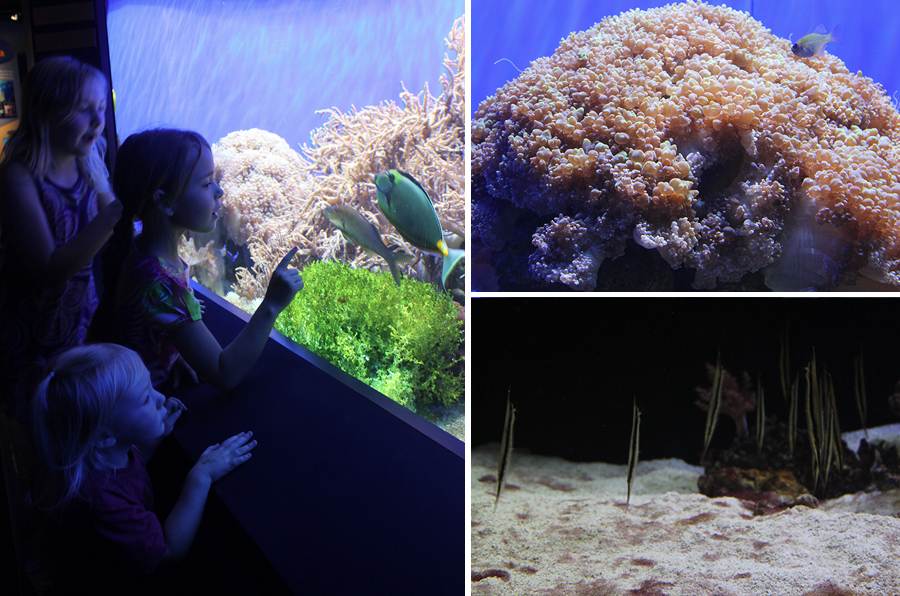 Fast, slow, little, big, old, young…no matter who you are and how you learn, it’s fascinating. There’s something for everyone. 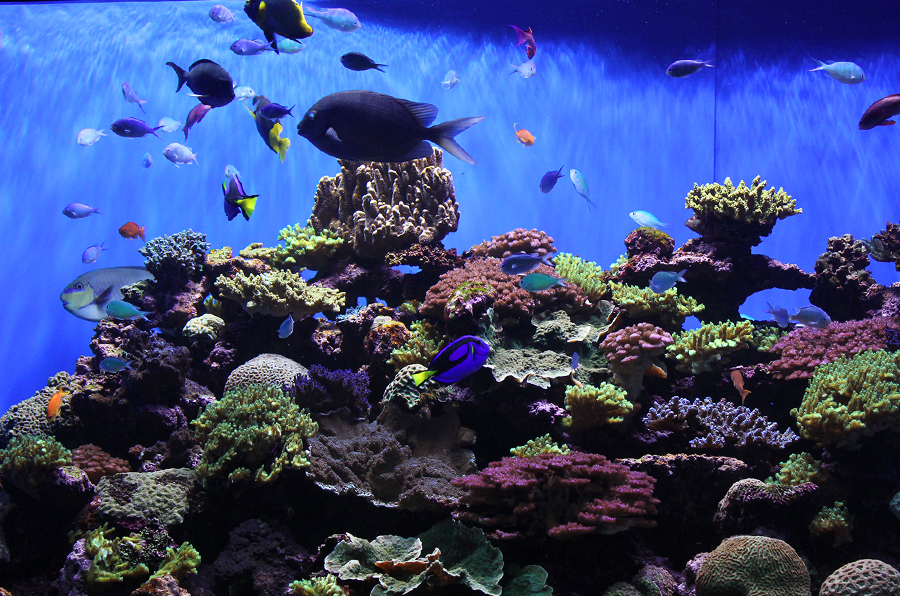 I kinda wanted to take the whole place home and install it in my living room.