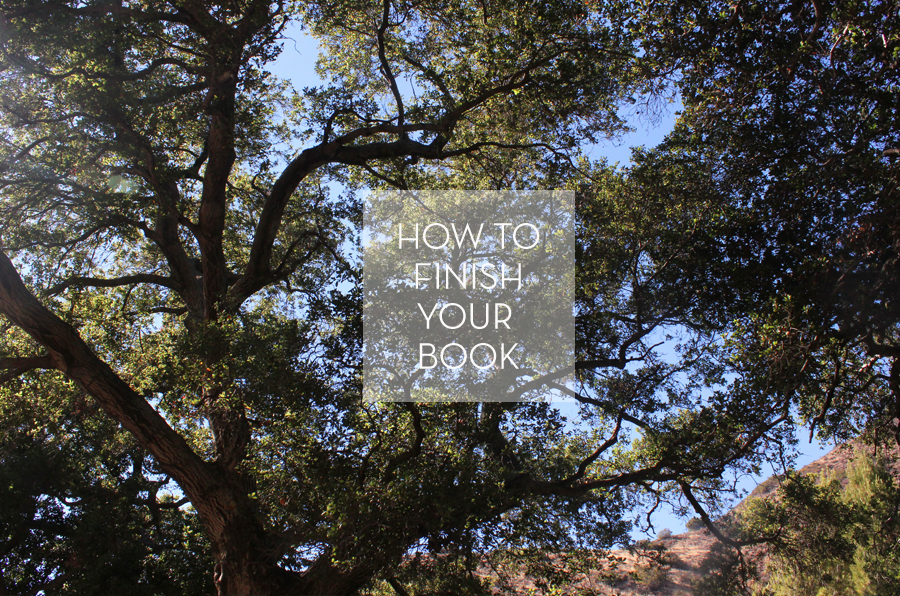 I always joked that if I didn’t get my book done in time I would hole myself up in a cabin in the mountains without internet or my phone and just GET IT DONE. That’s what it would take, right? A week of no wifi and no distraction, just peace and quiet and nature…

That’s a nice daydream and all but I don’t exactly have a cabin in the woods, nor do I have the budget to rent one. The last cabin I did have belonged to my in-laws and it’s about 16 hours away, maybe 20 and that doesn’t include the two hour trip up the mountains with extreme car-sickness. (I hate that part the most.) That cabin would have done the trick but it wasn’t really feasible.

Well, the book deadline did come down to the last week and I still didn’t have it done. It was all in my head, which is good chunk of the work but it wasn’t complete. There were lose ends. There were many holes in the plot that had to be buttoned up. What was I going to do?! I was pulling my hair out. I kept trying to work on it after Bug went to sleep but I’d stare at my laptop screen and fade. It just wasn’t happening.

I was moaning about this to my new MettaPrints partner, Teri, and she basically said, Come up to my house in the canyon. It’s only 30 minutes away and we have lots of peace and quiet. I have teenagers who will babysit Bug. Bring her up. We’ll spoil her rotten.

It was exactly what I needed! Where do I find friends like this?!! It’s like they drop out of the sky. Thank you, God. 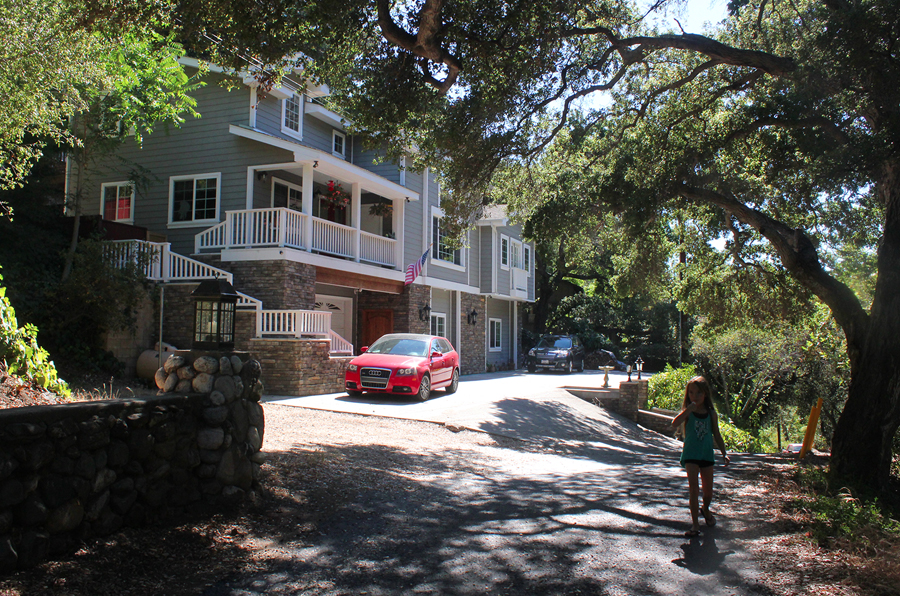 Off we went to the most amazing house you’ve ever seen. It’s like a treehouse in a canyon of towering oak trees. The road was a tiny bit winding to get there but it only took us 25 minutes which was not enough time to get carsick at all. I didn’t even know this place existed! It’s like a little bit of northern Californian paradise tucked away in Orange County. And yes, I’m totally looking into moving here. It’s so beautiful. 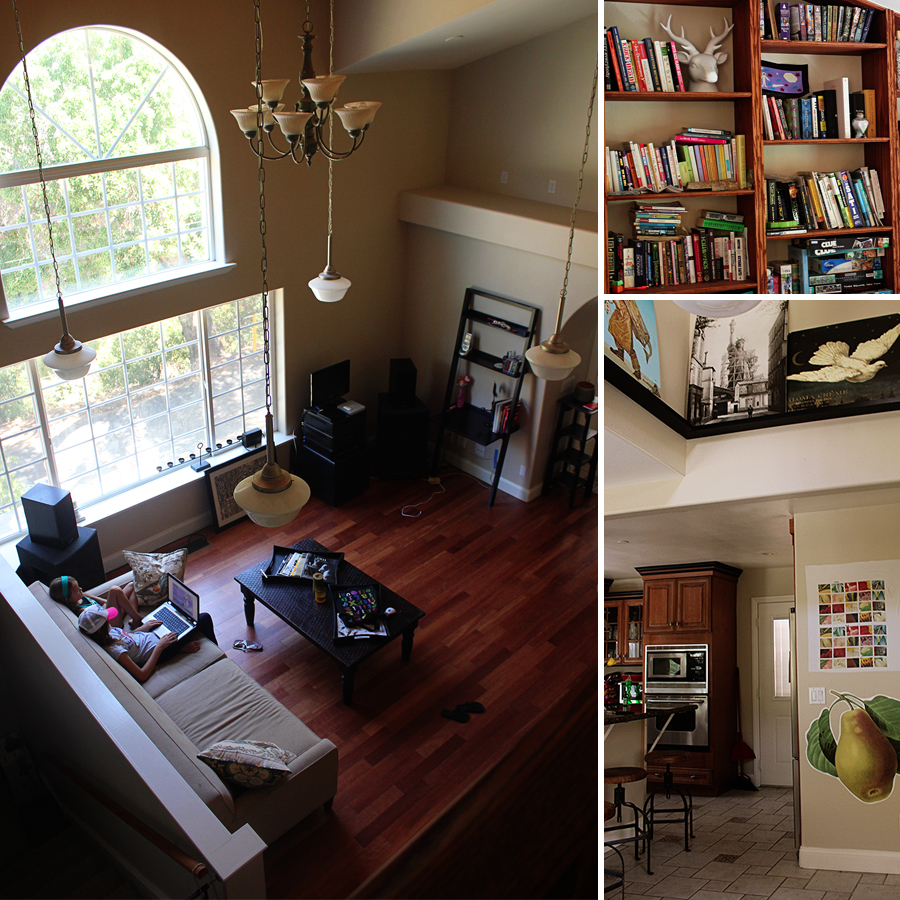 The teenagers kept Bug occupied with a steady stream of Minecraft, Dance Dance Revolution and popsicles. She also got to go see their horse a little ways down the canyon at the local stables and hang out with the two resident dogs, Maggie and Ruby. 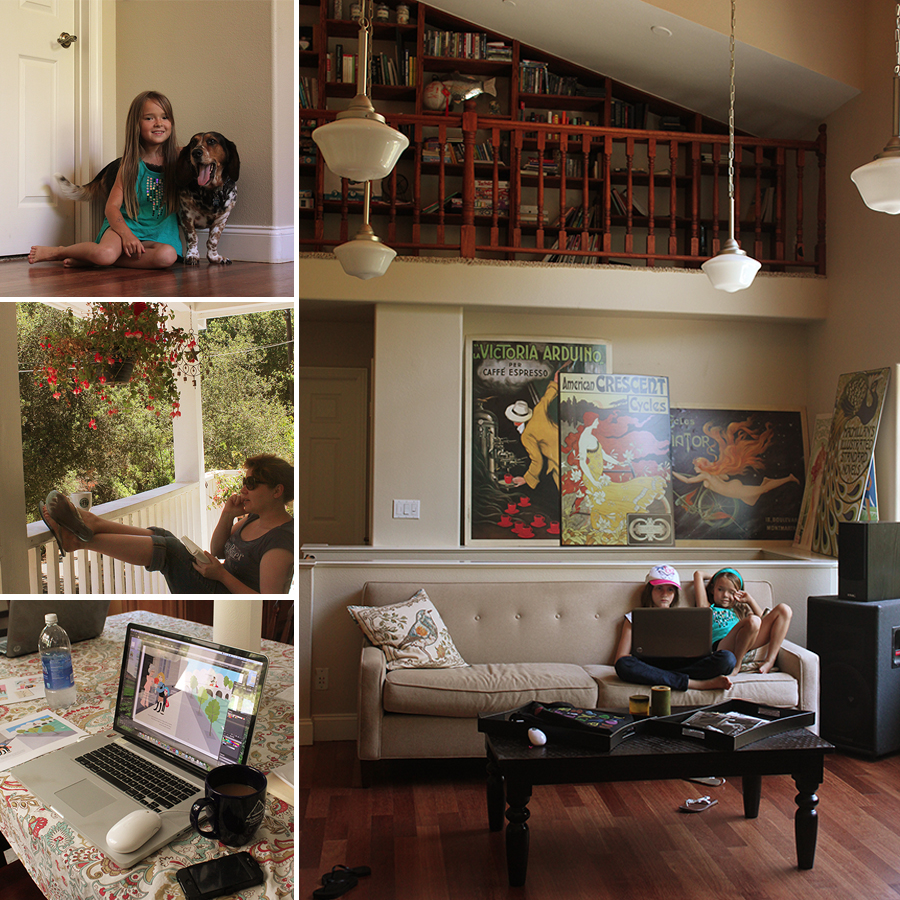 I took up residence at the dining room table and cranked out my book. 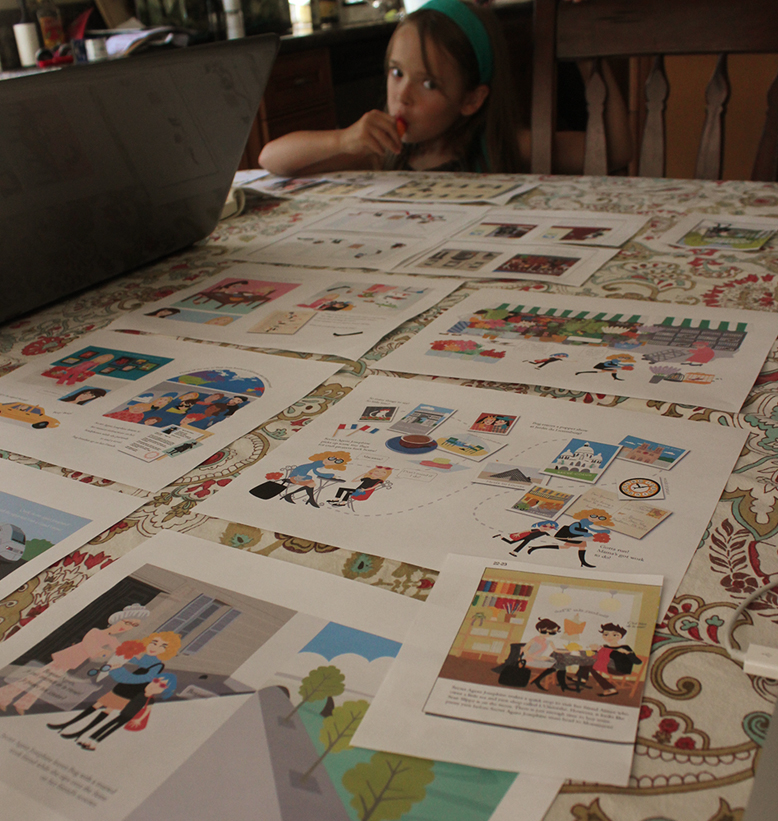 The really cool part about working at Teri’s house is that Teri used to be an art director. Maybe she still is, she wears many hats. When she saw me struggling with my plot she started helping me. We analyzed the many many pages and took away unnecessary parts until the storyline became tighter. It’s still not perfect. I’m sure my editor will have many changes and critiques but it got me past the roadblock that has been antagonizing me for the last month and really, the real reason SAJ in Paris never got printed last year. The plot was horribly flawed.

I’ve always thought of myself as a writer and an illustrator but for some reason with this story I just wanted to illustrate and not write. Something wasn’t clicking between my left brain and right brain. It’s like my right brain took over and all I wanted to do all day was illustrate my characters doing fun things in pretty scenes and not care about realistic timelines and plots. After spending hours and hours on those illustrations, I fell in love with them and I couldn’t just lop off parts that I’d spent so much time on. I can’t take out the metro scene! That took me forever!! etc etc…

So you can see how the wisdom of an art director could be a lifeline for me when I have one week left to finish my book. She was a lifesaver. 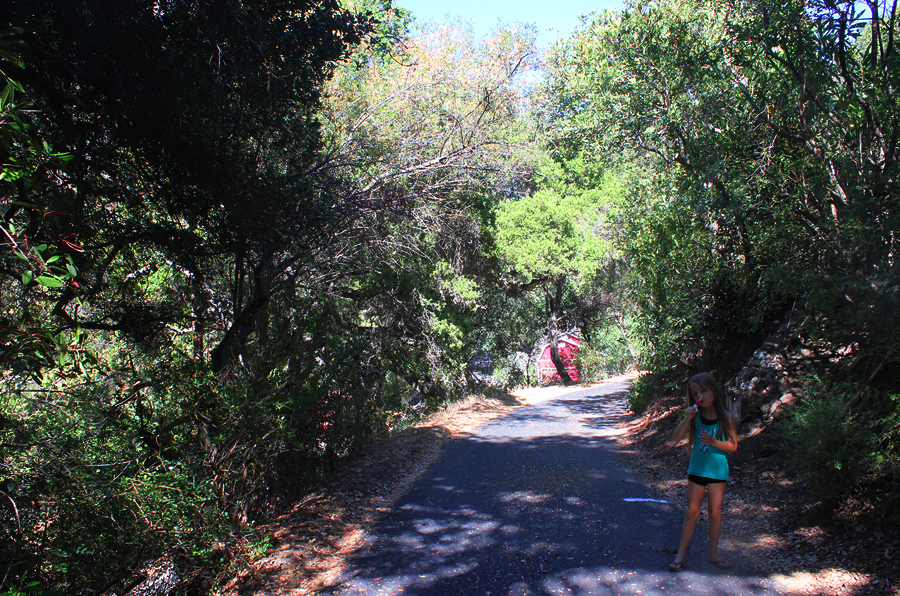 And it wasn’t too shabby for Bug either. 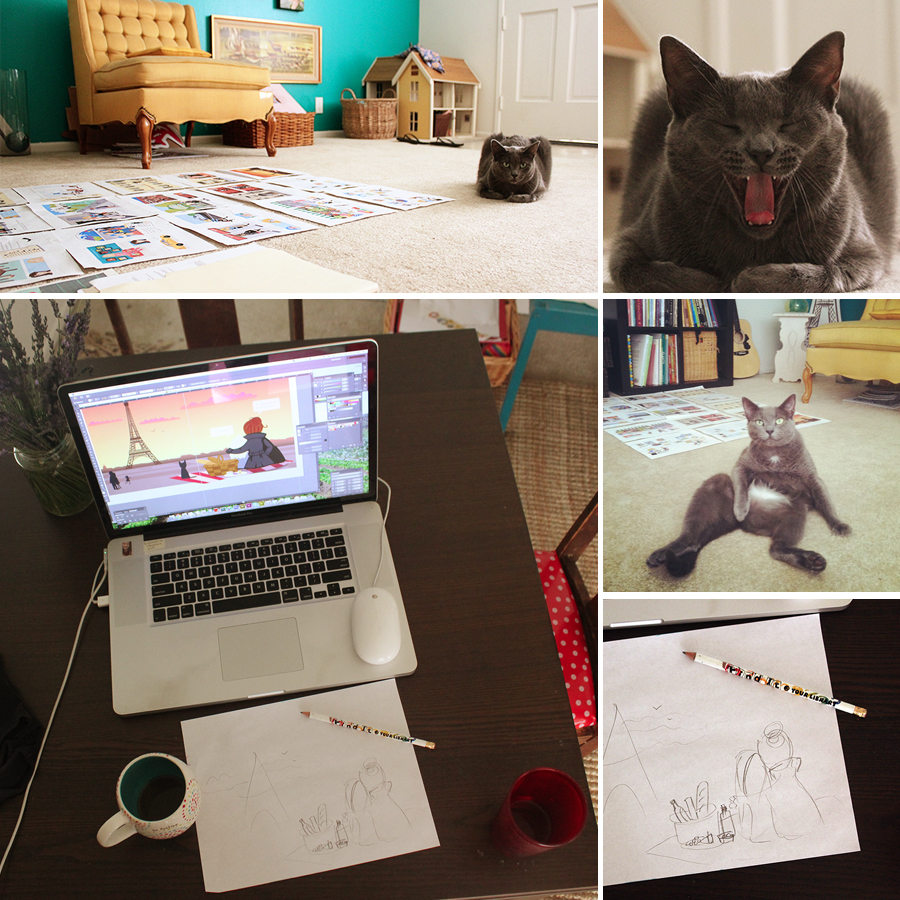 After the week was up I went home with only three pages left to finish. Those pages were easy. I whipped them out in one Saturday while Bug was at her dad’s.  We’ll see what my editor says next week.  Hopefully this time it makes it all the way to publishing. Cross your fingers!

In the meantime I think I might  talk Teri into offering a B&B Book-Finishing Retreat for other authors struggling like I was. 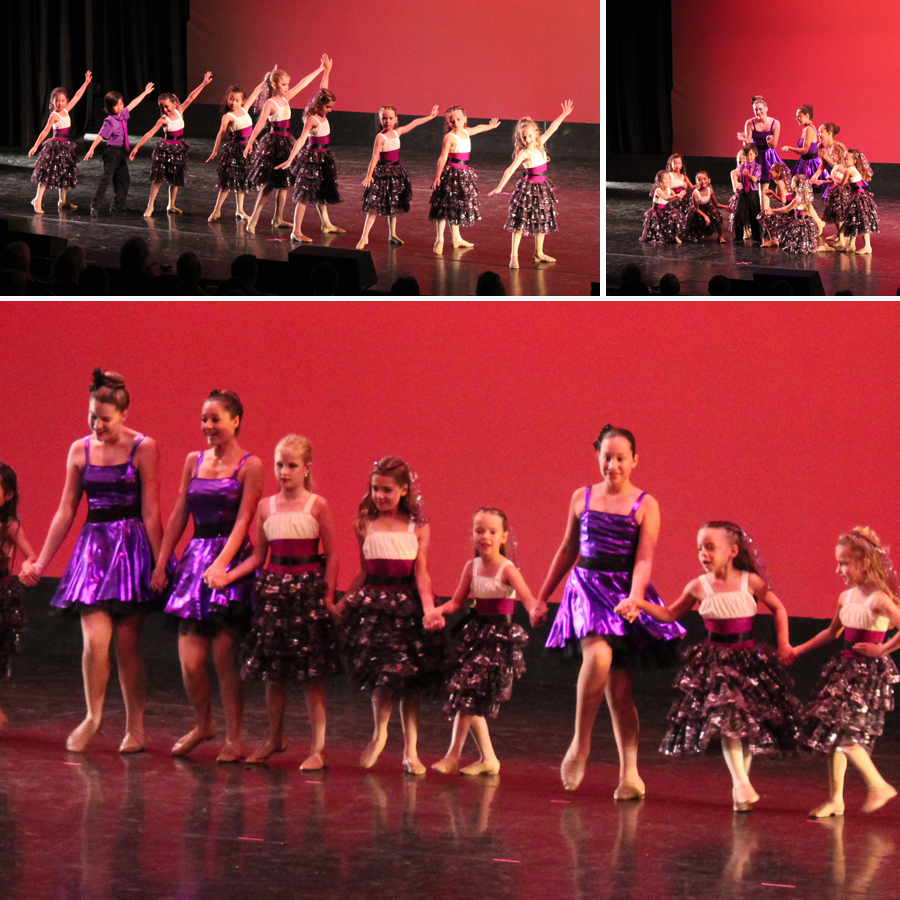 I knew something was going to go wrong was when I dropped Bug off at her dance recital and her name wasn’t on the sign-in sheet. It’s kind of a big dance company and things get a little unorganized at times so right away I was worried. Did we show up for the wrong show? Was her dance not part of the program? Is it just a typo or do we not exist?

Then I saw her teacher and she led Bug off to the back stage area where all the other dancers were. Everything seemed okay. I just wrote Bug’s name in at the bottom of the sign-in sheet along with about five other parents who also couldn’t find their kids’ names. I was a little ticked but these things happen. I’m the queen of typos myself so I really can’t judge.

As the lights dimmed and I read over the program my heart sank. Bug’s name wasn’t on the program either. She had two dances and one dance was completely left off. The other dance was listed but no Bug. I sat there for a while seething. Should I just let it go? Would Bug be sad when the MC read off everyone else’s name and not her’s? Toby pays a lot of money for Bug to be in this program. The costumes are outrageously expensive. Bug’s been practicing her dance for months! Are we just a number to be forgotten? I was getting mad.

Of course I don’t want to be one of those parents who complain about everything so I sat there for quite a while trying to keep my temper in check. Toby was there too and he agreed with me that I should do something. There was a lot of time between dances (due to costume changes) so I went off to see if I could find someone who could tell the MC to add Bug’s name back in.

Of course this wouldn’t be a very good story if that worked out. You know it didn’t. The ushers were completely helpless and anybody who could call the shots was already backstage. One usher said I could talk to the manager on Monday which did me no good. The show was going on right then and after the recital Bug is taking a break from dance, possibly even quitting. Couldn’t they do anything? Bug’s dance was coming up quickly. The ushers just shook their heads. One of them even got a little defensive with me which was weird because I wasn’t being rude about it. You’d think they’d want to apologize at the very least.

I didn’t want to disrupt the backstage process. They have a show to put on and obviously they were already having difficulties since there were such long breaks between dances. I know better than to mess with that so I went back to my seat and sat through another dance but my unhappiness wouldn’t go away. It was bee in my bonnet at this point. How dare they slight my child like that? the mama bear in me grumbled.

I decided to try and talk to the MC myself. He was situated at the top of the theatre in a room with a window. I climbed the stairs to the back and tried to open the door. It was locked. I knocked. I waited. I knocked again. The MC was chattering away trying to kill time between dances. He didn’t hear me or maybe he did and couldn’t take the time to answer. I don’t know. I went back down to my seat defeated.

What could I do?

Finally Bug came on stage with all her fellow dancers and they read out the names one by one. I waited. When the last name was read I yelled out as loud as I could “AND BUG!!!!” Except of course I used her real name which is quite melodic since it has three syllables. I had the biggest voice ever and it rocked around the theatre. I could feel everyone turning in their seat to look at me in the dark. A few other parents whistled and clapped.

Shouting like that was actually quite shocking if you know me in real life because usually I have a very quiet mouse voice that nobody can hear. But I guess even a mouse can roar when her baby is getting overlooked.

Bug looked up and I could see a smile from ear to ear. I was worried I embarrassed her but when I asked her about it afterwards she said no. It made her proud—which makes me proud. So who cares about the stupid program and the stupid dance company, both Bug and I left with smiles on our faces.

Her dance was really cute. Her teacher choreographed it really well and combined her dance with another class of older kids. It’s a musical theatre class so it was so neat to see them snapping their fingers and running around with their arms outstretched, doing big Vegas style kicks. It was really cute. Maybe cutting their music off abruptly at the end wasn’t so smooth but that’s not the dancer’s or the teacher’s fault. That’s sort of normal.

I’d like to say that’s the end of the story but of course not, pffft. I got home and wrote a passive agressive email to the management because apparently I wasn’t quite over it. I tried to make it really nice though. I know putting on a show with hundreds of kids is stressful. Lots of things go wrong. It’s show business! Really, all I wanted them to do was apologize. I just want to leave with good feelings about the company. But I guess they don’t understand that. Maybe they are sick of parents in general. I’m sure they are actually.

Her teacher did call me though to apologize even though it wasn’t her fault and there wasn’t anything she could do. And guess what? She’s quitting! Not over the program errors, that would be silly, but apparently management doesn’t get a lot of other things either—which doesn’t really surprise me at all. She’s already got another job which also doesn’t surprise me. She’s really good. Bug’s taken two classes with her and loved her. 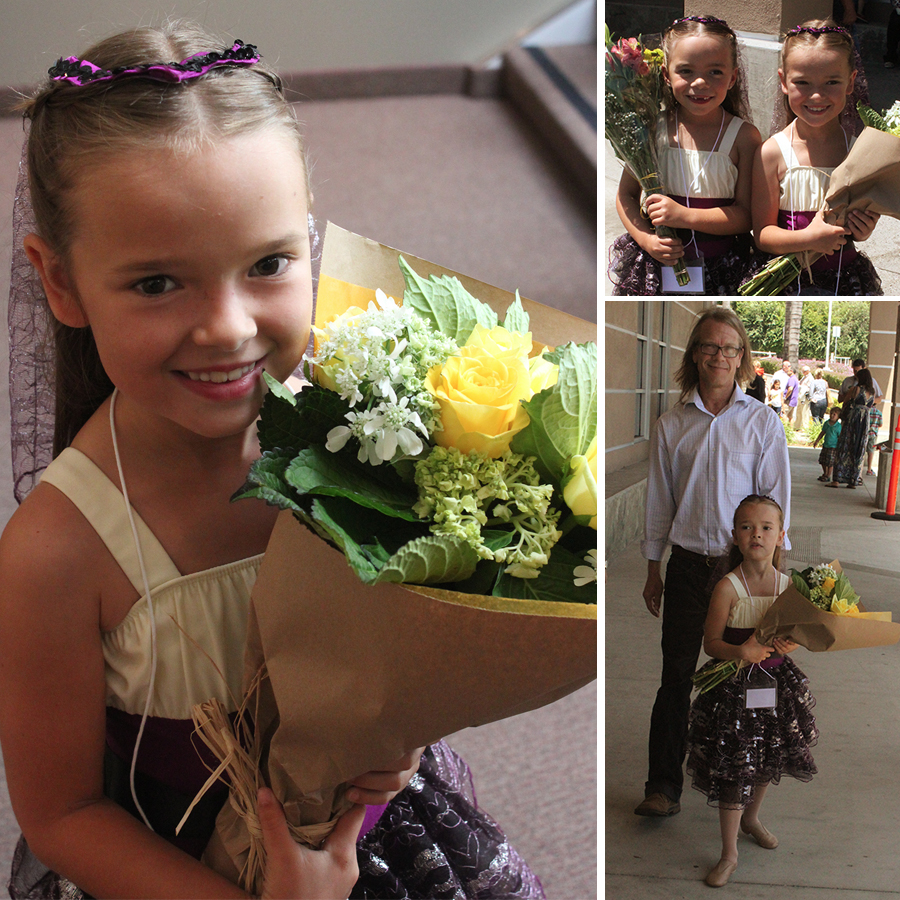 So, moral of the story? Don’t mess with my kid. I’ll roar at you.