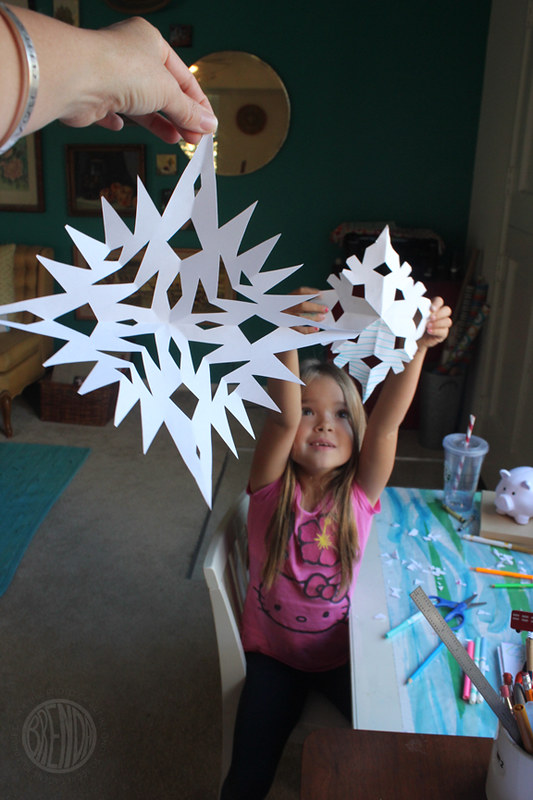 Yesterday we were over at my friend’s house for a playdate and the little girl showed Bug how to make a snowflake. Bug quickly caught on and danced around the kitchen showing everyone her creation. “This is the first snowflake I’ve ever made!” she sang.

“Brenda!” my friend gasped. “You’ve never taught your kid how to make a snowflake!!”

I hung my head in shame. It was true. I think we made snowflakes when she was three or something but she probably didn’t cut them herself. I probably took over and made them all for her. Or, you know me, I was probably off trying to invent some other craft that hadn’t been invented before. I don’t have time for silly snowflakes! Bah! I can make snowflakes in my sleep.

But truthfully, I was a little ashamed with myself. I love snowflakes! How have we not made this a tradition? We should cover our windows in snowflakes STAT! 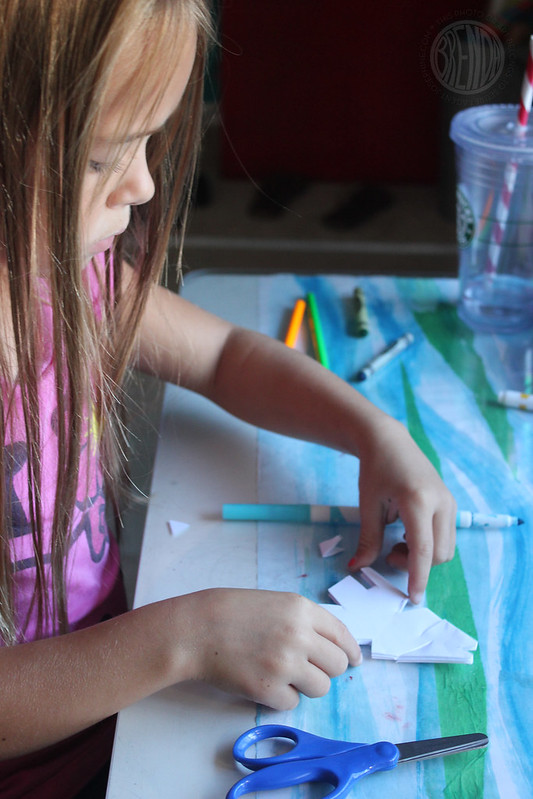 So this morning we got right to work. 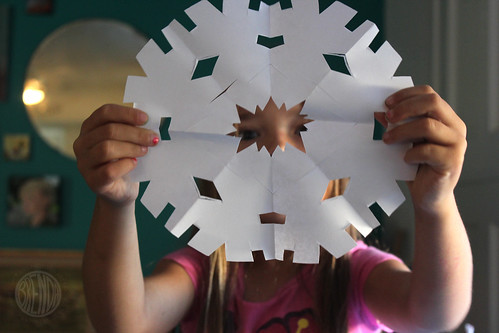 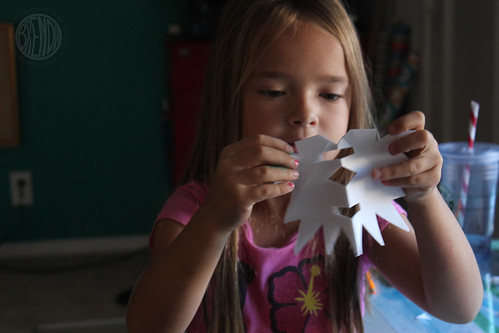 I love the suspense of unfolding a snowflake, wondering what all your little cuts will make. 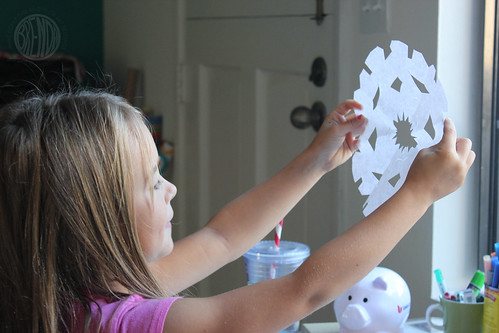 Tah dah! Every one is better than the last. 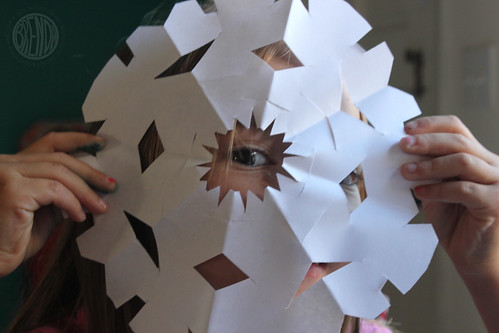 Bug was having fun. 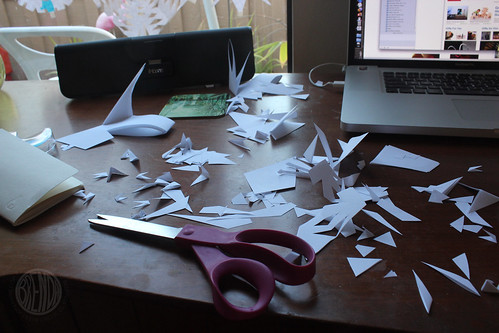 My desk was a flurry or paper drifts. 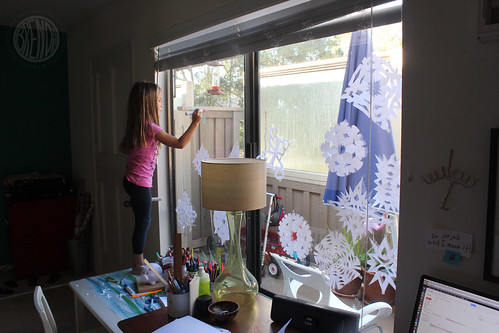 Bug decided to marker pen a Christmas message onto the window to go with our snowflakes. Her enthusiasm for scissors was waning. Scissors can be so hard for little fingers. 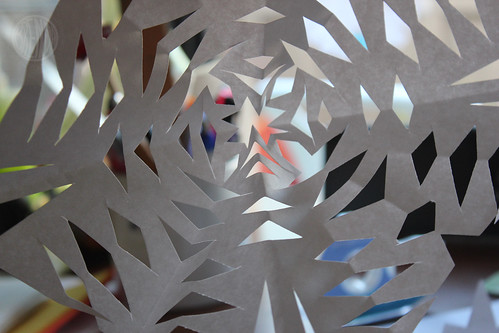 And it didn’t help that my overachiever cutting fingers had to decide to go big. Go big or go home! they yelled! It’s gonna be a great big blizzard up in here! Take that apartment complex that makes rules about chalk on the sidewalk! I’ll show you!

I may have gotten a little carried away. 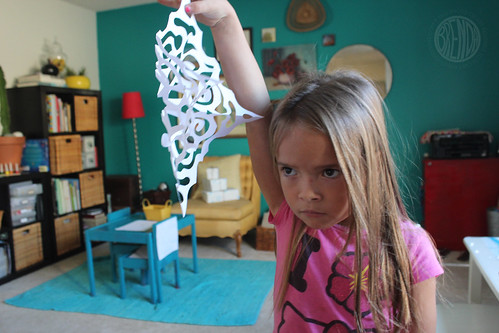 About this time Bug was about ready to tell me to take my fancy snowflakes and go jump in a frozen lake. The fun element had definitely expired. 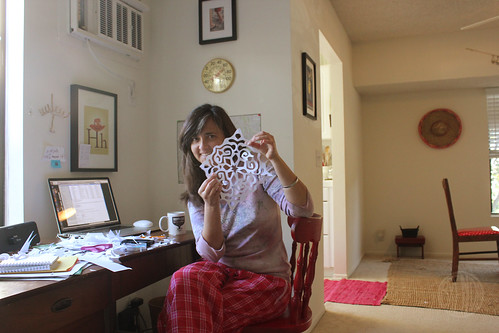 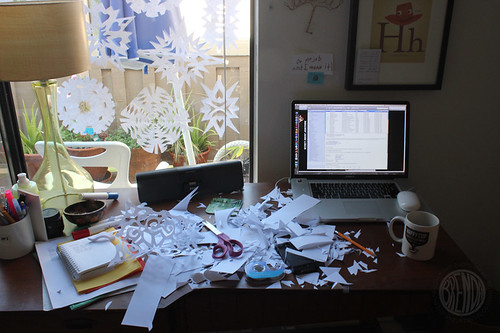 Even the mess is pretty! 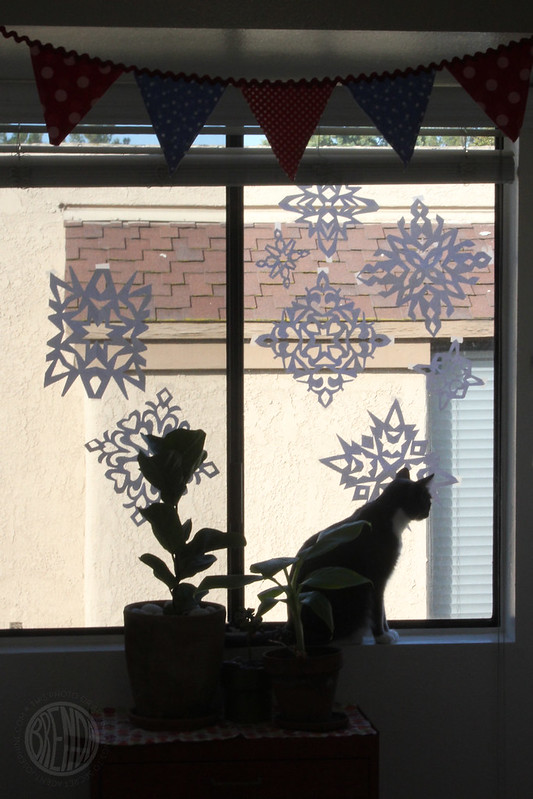 The cats think so, when they’re not trying to eat them… 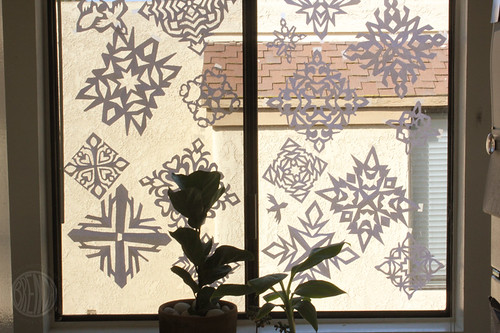 So there you go. Next time you’re walking along and you see a window filled up with intricately cut snowflakes, don’t be jealous of the super mom who has time to make ridiculously fun things with her kids. Go ahead and squeeze your normal well-adjusted kid because she’s probably a lot happier than mine who is currently buried under the covers having a temper tantrum because I won’t stop making snowflakes long enough to help her pick out a Thanksgiving Day Hello Kitty outfit.