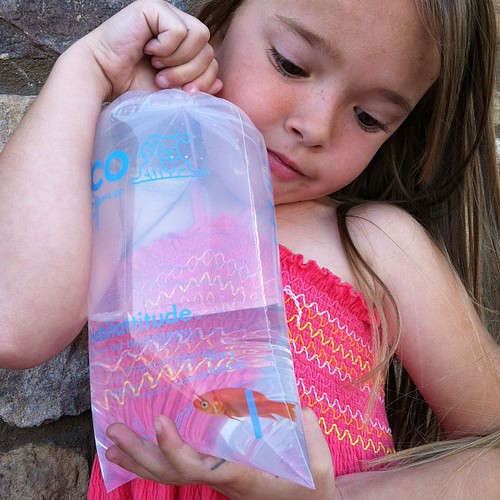 A while back Bug was invited to an “Under the Sea” birthday party. We love anything “Under the Sea”, as you know, so this party was right up our alley. And you can imagine our delight when the take-home party favor was a real live goldfish in a little glass bowl. Bug was over the moon and named her little fish Nemo right off the bat.

I was surprised when Nemo lived through the night and into the next week. His bowl was super small though so I borrowed an old beta tank my mom had. I’d had it before and managed to keep guppies alive in it for months before a power outage turned off my desk light and they died from getting too cold. It was small but I wasn’t quite ready to shell out the dough for a big aquarium. I’ve had a goldfish or two in my life so I know how these things go.

Amazingly, Nemo kept staying alive so we decided to double our fun with a trip to Petsmart. Twelve dollars later we had a small plastic plant, a really cool under-water bridge and a friend for Nemo named, Orangina.

Then things started to go bad. Orangina and Nemo might have gotten fed a little too much to eat even though I had repeatedly warned Bug about over-feeding fish. But Nemo and Orangina were very hungry, mom! she informed me as I surveyed Nemo and Orangina’s foggy tank. I thought I’d kept an eye on Bug’s feeding schedule but maybe I should have kept the food out of reach altogether. Orangina started swimming sideways and by the next morning she was dead.

We had a funeral in the backyard and buried Orangina by the rose bushes with a big sling-shot looking stick for her gravestone. It was all very sad.

I knew we had to step it up a notch if we were going to keep Nemo around. So we took a dreaded trip to Walmart and bought one of those all-inclusive 10-gallon aquariums kits that comes with a filter, a water treatment packet, a tiny packet of food, a light etc etc…We bought some rocks and some more food and before I knew it, I’d spent over $50 on a party favor fish that we got for free at a birthday party.

But Nemo was a great friend for Bug by now. She checked on him religiously. I remember doing the same thing when I was a kid. In fact, my mom still has a great big 80-gallon aquarium that she’s kept the same school of happy fish in for years.

Even though we had a new tank with nice clean treated water and Nemo seemed to really like it, after a few days he started swimming sideways too. We prepared ourselves mentally and sure enough he finally gave up the ghost a day later. There was another funeral in the backyard by the roses.

Thankfully, my brother showed up in town about this time and he’s kept fish for years so he took us back to Petco to do it right. We got our water tested and got a long lecture from the official fish expert on Nitrates and Nitrites and how bad our city water out of the tap really is. I did not know! So we started over with new treated water. We let that water sit for a week (which was great for anticipation and appreciation—I highly recommend it) and then went back to Petco a week later for some new fish. 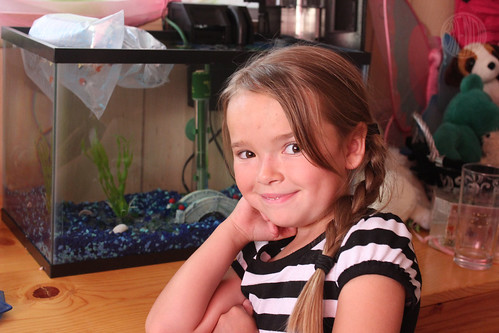 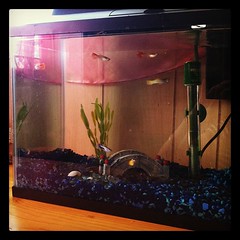 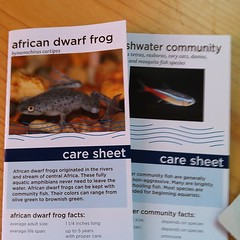 We got six guppies and one African Dwarf Frog. We were very excited about the African Dwarf Frog. Unfortunately, he burried himself under the plastic plant and bridge and we haven’t seen him since. I can find him if I move things around but I have no idea if he’s eating. I have to put my hand all the way in the tank to give him food under his bridge because if I let it drop from the top the guppies eat it faster than you can blink. Those suckers like to eat! And even when I put it under the bridge they go after that. So I’m really worried about Mr. Frog aka Jumpy. 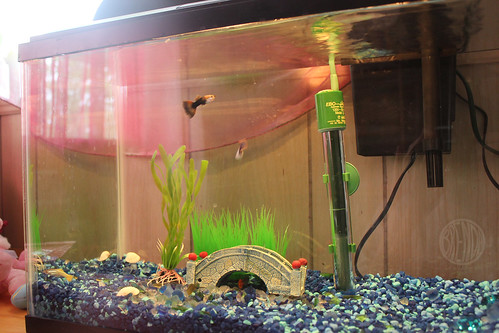 A few days later two of the guppies died. It’s been two weeks now and the remaining four are still alive. Mr. Frog seems to be alive too but I haven’t seen much of him. Anyone know anything about African Dwarf frogs? Please don’t tell me that he should have his own tank because I don’t think I can handle another aquarium at this point. 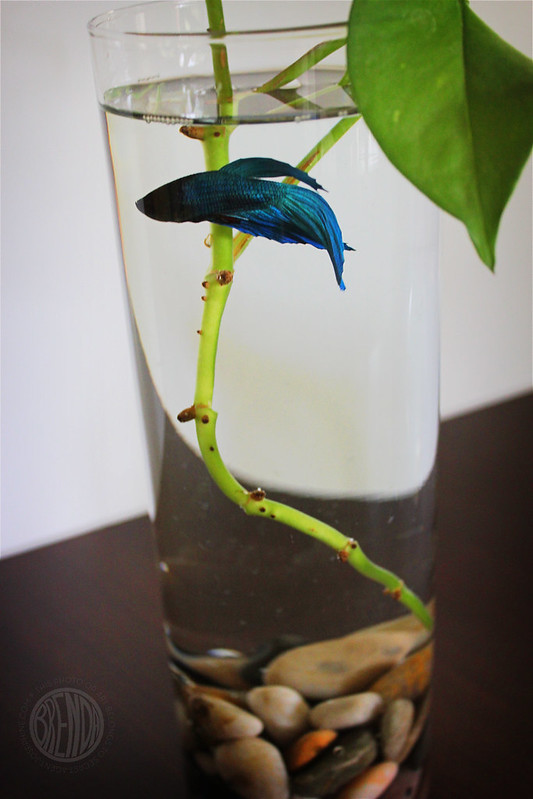 But the story doesn’t stop there of course. Oh no. Toby got wind of Bug’s new hobby and he decided he’d show her a really good time and take her to some kind of super ultra deluxe pet fair they were having at the local fairgrounds. I have no idea what happened but somehow Bug came home with a blue beta that she “won.” His name is Ocean. 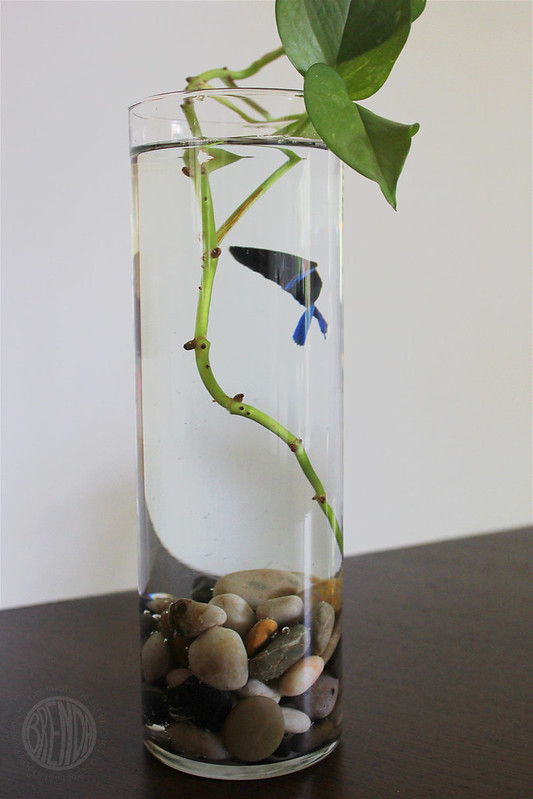 He’s very beautiful but I didn’t want a Beta. I’m in over my head with the fish in this house. As it is I have to change water every three weeks and all this hulabaloo about additives and nitrates and nitrites has me a little stressed out. I have a hard enough time keeping cat boxes clean and a dog who doesn’t like to go outside let out at regular intervals. Don’t get me wrong, part of me is just as over the moon about our menagerie as Bug is but the other part is very tired. So we have a Beta. 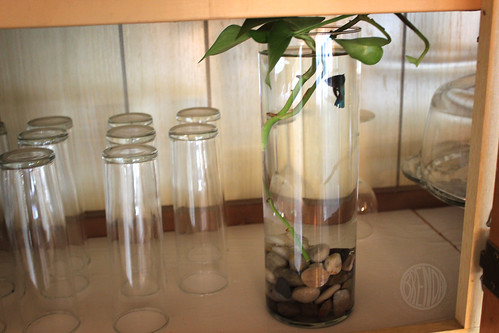 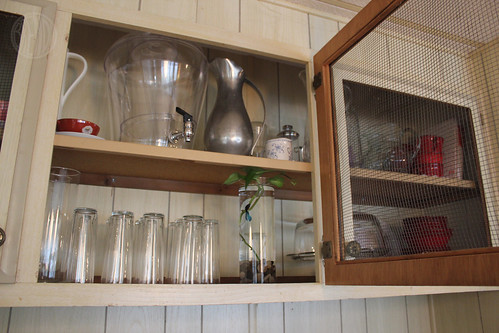 So he lives up high in the china cabinet with all my party glasses. It’s very swanky up there. 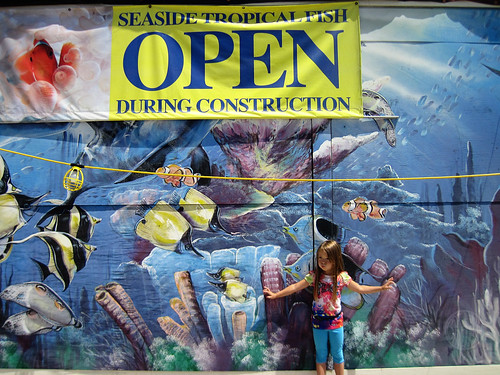 So how does all that add up to six thousand dollars you ask? Well, it doesn’t quite but what I’m trying to say is that a goldfish is the gateway drug to a very expensive hobby. Last weekend Toby took us on a family outing to a tropical fish store in Huntington Beach. What a fun family outing you say? Hah! 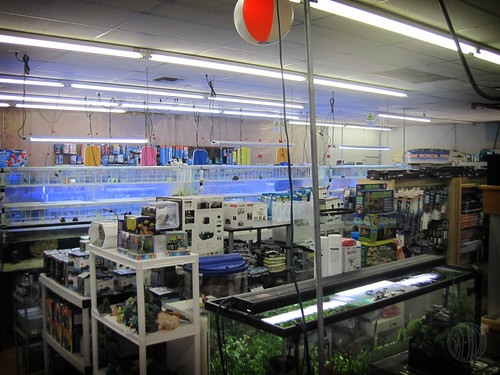 It was. This store is a wonderland of fish and all things fishy. Don’t want to pay admission to the fancy dancy aquarium? No problem, just hit up the local tropical fish store. We spent hours and hours there. Mostly because Toby got sucked in but also because it was fun. 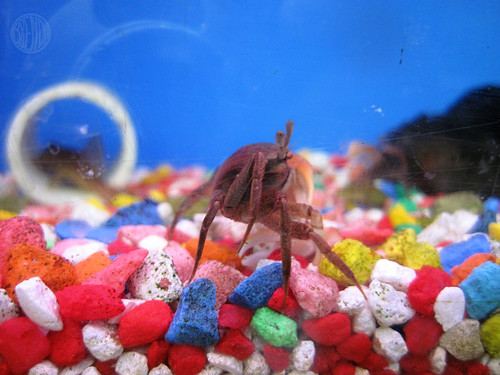 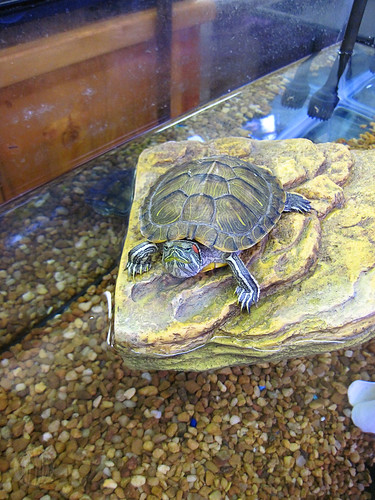 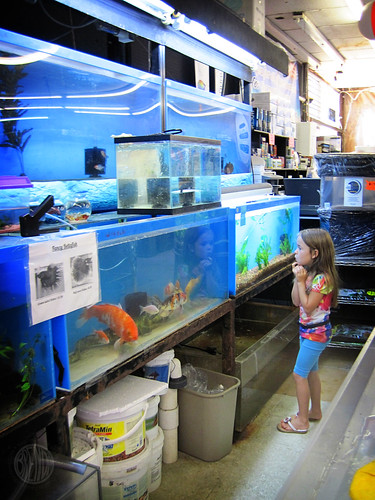 and turtles and giant koi… 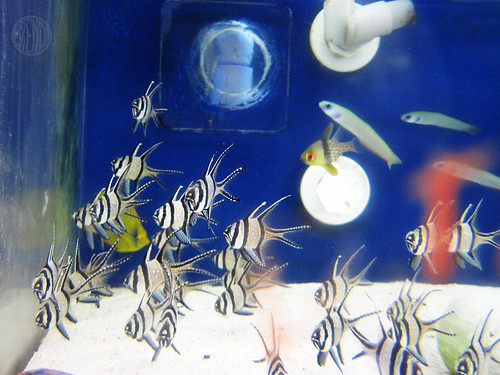 Fish with stripes that went this way, 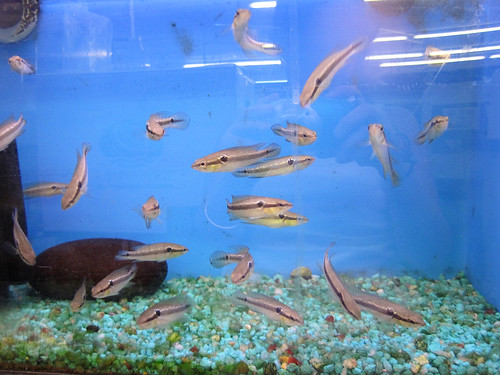 and fish with stripes that with that way. 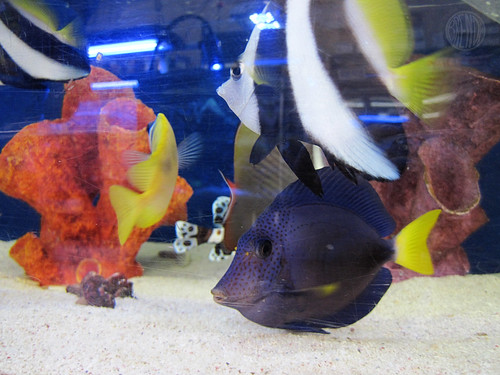 Fish right out of the movie Nemo… 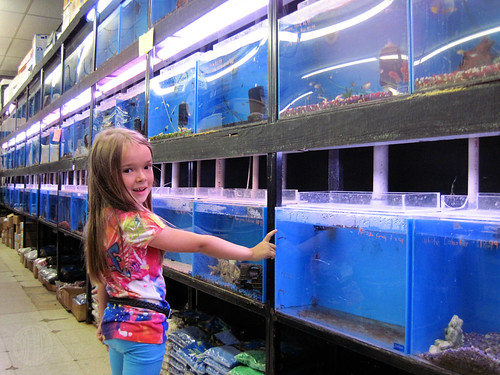 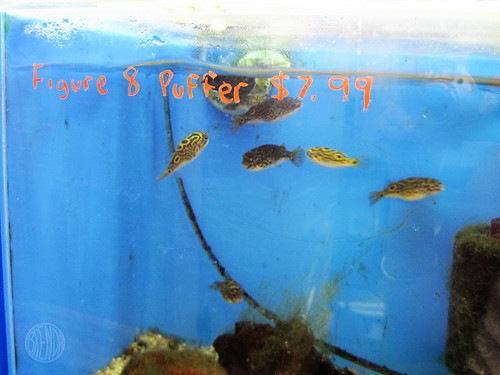 And tiny miniature puffer fish! I want these ones really bad. They are so cute. I don’t know if they puff up or not though. 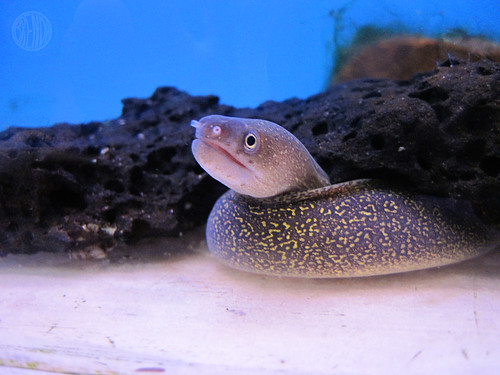 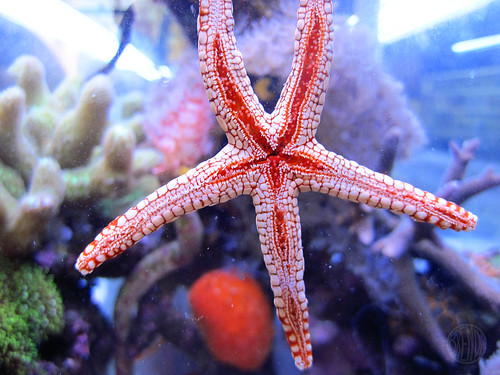 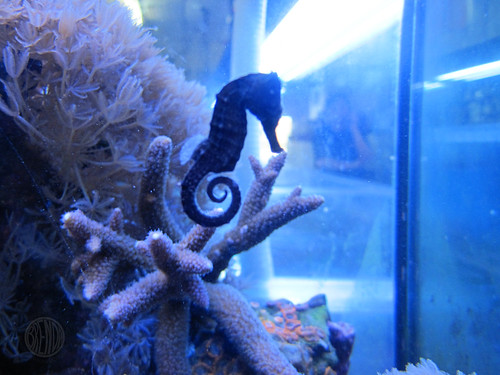 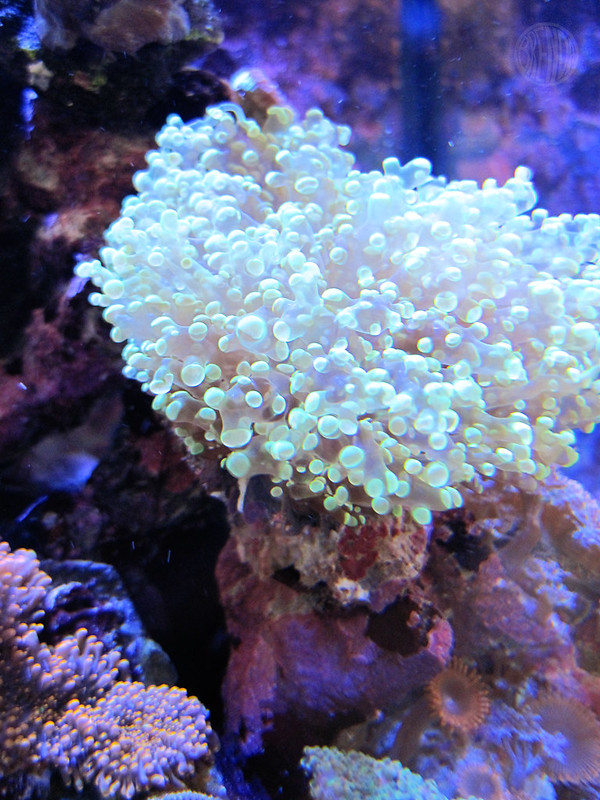 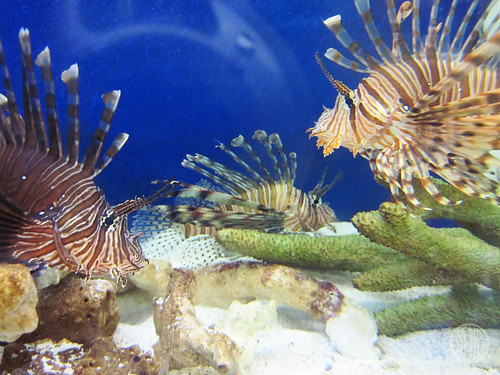 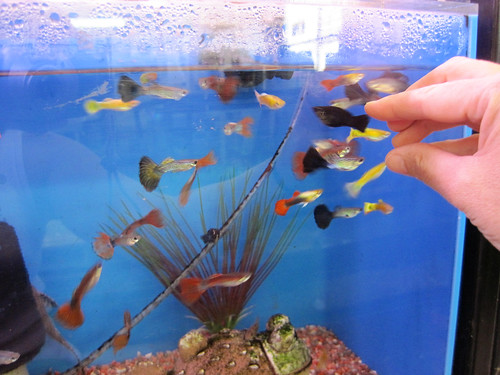 And of course lots of friendly guppies. 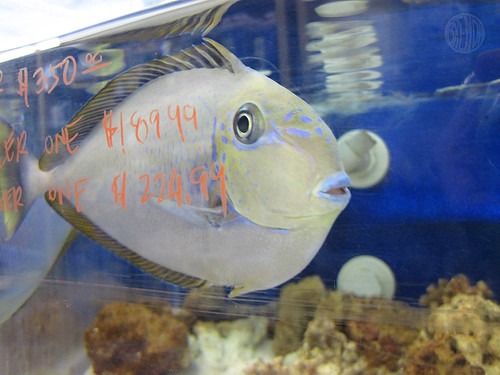 You know what Bubba thinks? He thinks we’re not going home without buying some fish… 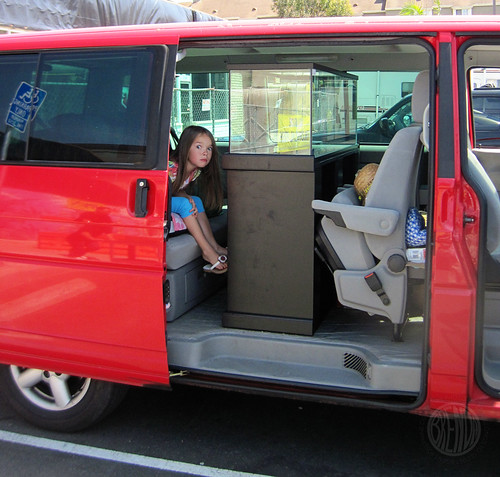 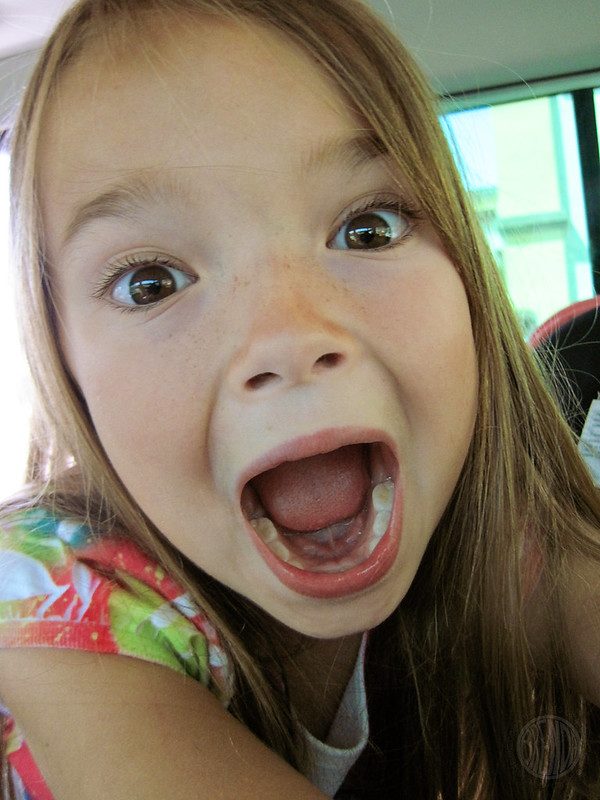 Guess who has Daddy wrapped around her little finger and now has an 80-gallon tank filled with real plants in her very own bedroom at Daddy’s house?

Toby is a total sucker.

He didn’t spend six grand. He didn’t even spend six hundred I don’t think but while we were in the store we ran into some tropical fish people and they said having fish as a hobby was pretty much like having a boat—you just throw money into the water. Of course I should probably qualify my teasing by saying that Toby has kept fish before and this hobby is near and dear to his heart. In fact, back when Bug was probably two or three I wanted to get her a fish and he cautioned me not to because he knew that someday this would be something very special they did together.

So I guess today is that day. This coming weekend they are picking out the fish that will go into the giant bedroom tank. I’m sure it’s the beginning of a very big and very expensive adventure. I’m just glad it’s at his house!