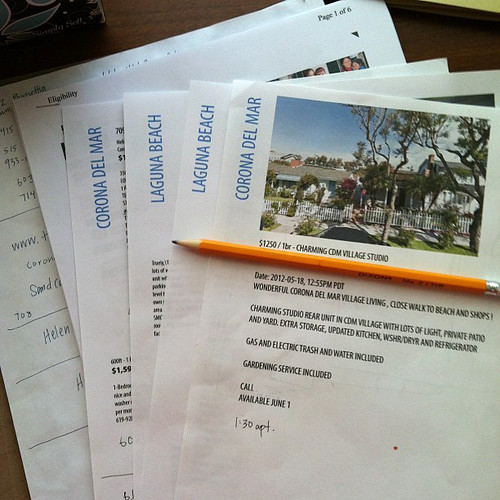 Apartment hunting is for the birds. It’s not that fun at all. There are all kinds of new and improved ways to find apartments nowadays like PadMapper and craigslist but there are no apartments to be found!! Well, at least no reasonably-priced ones that is. If you have a lot of money there are tons of beautiful places to live but personally I don’t have an extra four grand a month to throw around. It’s pathetic.

I found the perfect apartment within walking distance of the school I want Bug to go to and our favorite park. It was lovely. I could hear children laughing, birds singing…it was exactly what I was looking for. It was affordable too! The only catch? It was only 350 square feet. That’s basically the size of a dorm room. AND it didn’t have a kitchen, just a counter for a hotplate and a microwave.

I seriously considered it and even researched a solar oven. I made an appointment to look at the inside and then things took a turn for the worse. The landlord called me up and asked me to tell him a little bit about myself. I got to the part where I have a daughter and he stopped me. He wouldn’t even show it to me. It was inhumane to let a kid live there, he said. And that was that. My dreams of walking Bug to school were shut down like a rattly lid on a copy machine. Ker-slammo.

Then while I sat around in Toby’s house fiddling with all my various notes on different apartments another listing popped up on craigslist. I called on it immediately. Probably minutes after it was posted and made an appointment to see the place. Two hours later I showed up at the “nice bright airy apartment” and guess who was there to meet me? About ten other prospective renters doing the exact same thing I was.

TEN. TEN!!! people looking at a postage stamp-sized studio going for $1250 a month!! It was so small you had to turn sideways to go down a narrow hallway to get to the bathroom. I don’t know how they build these things to code. But it was cute. Nice hardware, nice windows, adorable Melrose Place-esque courtyard to share with two other tenants.

I might just go for it if the landlords choose me. Which they probably won’t because I don’t know if they really want a mom and her daughter living there. I did bring Bug around to meet them and I’m hoping she charmed them with her cuteness but they were a little distracted with the crazy party of prospective renters that were interrupting each other at every turn. So I’m a little discouraged.

Thankfully I have time. I don’t have to find a place until August. Something is bound to turn up. If you think of me maybe you could say a little prayer or call up your rich uncle who has property in Newport Beach and see if he wants to rent out that little casita by the pool.