posted in Family Matters, Moody Blues, spilling my guts on May 18, 2011 by SAJ 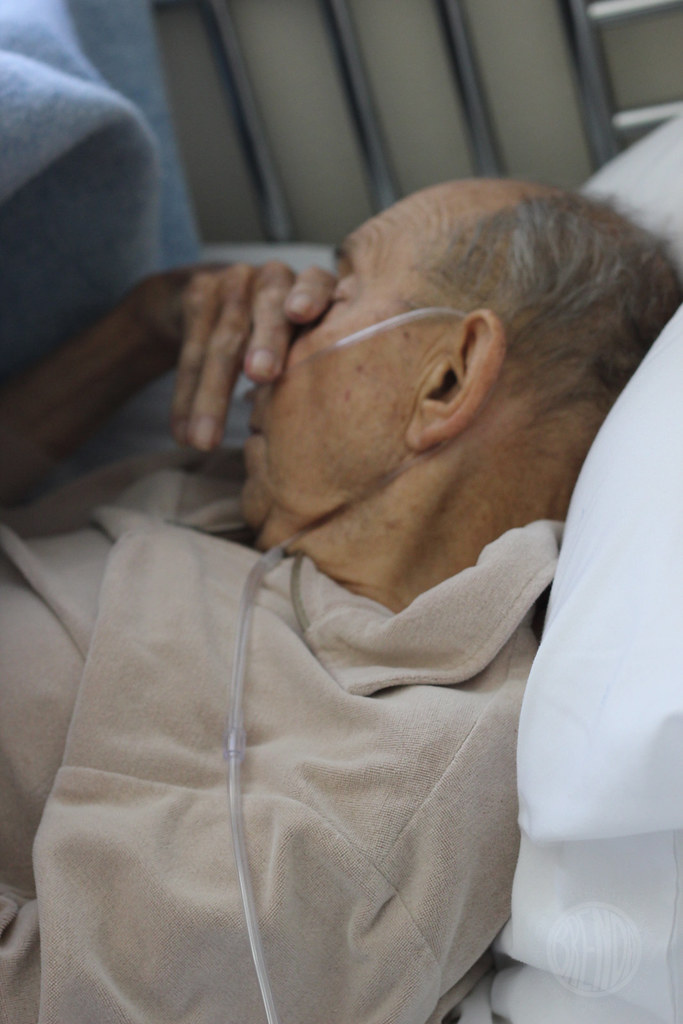 They say my grandpa could linger on like this for a week or so. He’s not eating, he’s not drinking. BUT! He’s not in pain. He just sleeps. He wakes up just enough to tell us that he’s not in any pain. He’s very clear with a grunt and a shake of his head. He just wants to go back to sleep. It’s very confusing to those of us left alive, peeking at him from the fringes of his underwater dreams.

He wakes up for the nurses, barely opening his eyes to acknowledge them so they’ll give him his medicine and go away, perhaps. Three seconds with us and then he’s gone again. My dad tries to shake his shoulders the way the nurses do but he doesn’t respond to my dad. We stand around not knowing what to do. Does he want us here with him? Should we stay? Should we go? How long should we stay? Do we put our lives on hold because we’ll never have this time with him again? 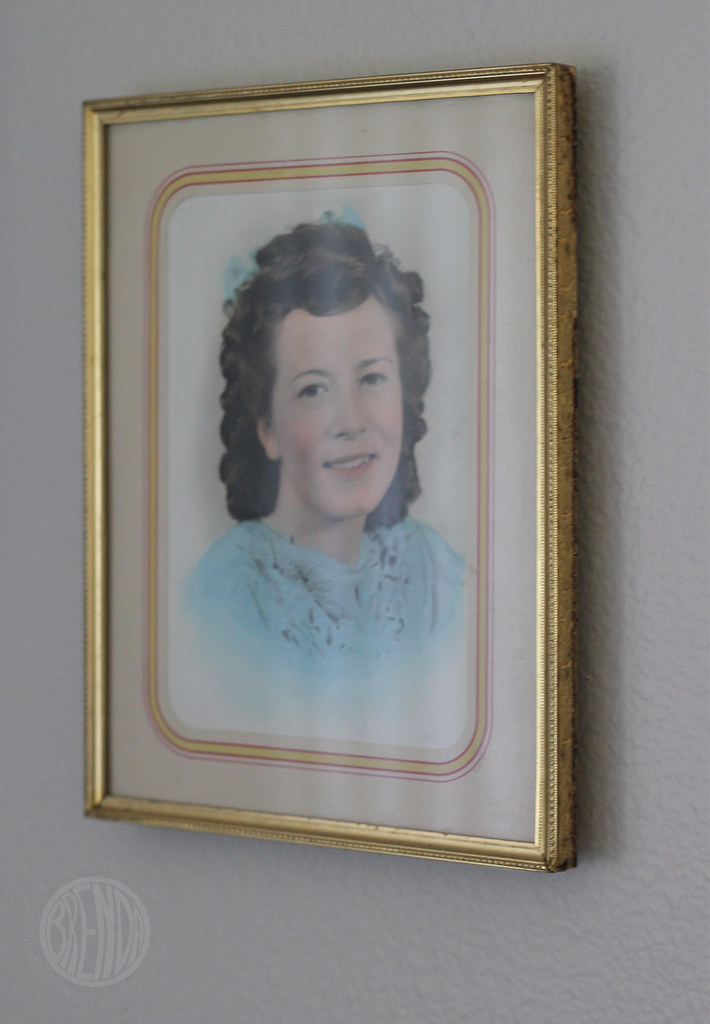 I deeply regret that I wasn’t there for my grandma when she died. I said goodbye to her on the phone but that was it and so many times I wish I could do everything over. I should have left work. What does a paycheck matter when you are losing a loved one that you’ll never see again and you miss so much?

Would it have made a difference if I was there? Is it better that I didn’t see her when she was in the worst of it? I don’t have any images stuck in my brain of her rattling with death like my grandpa is now. Does my grandpa want to be remembered this way?

I’m sorry to bring everybody down with me. I’m actually not down. We’re just plugging away with life like we do every day. Work, school, play, cook, clean, worry, repeat. I think I have a realistic grip on my emotions but then sometimes you think you are fine and then you are suddenly not. Kind of like clouds passing.

I’m mostly sad for my dad. I’m angry at his dispatcher who had no compassion and bawled him out for not being at work even though he was at work and sat around for hours waiting for his truck to be fixed when he could have been sitting with my grandpa instead. How can people be so unfeeling?

Of course my dad holds a brave face. He always does. I’ve never seen him cry. It’s not like any of this is a surprise either but it’s still hard to process. I know it’s hard on him. My dad holds the entire family together by working so hard. We all depend on him—even me with my streak of independence and my flailing freelance business.

So when the dispatcher calls and I see my dad trying to defend himself for something he didn’t do in a time when he’s allowed to drop a few balls, I get so angry. How can anyone bawl out my Dad who does so much for everyone? He’s always kind to his dispatchers. I wanted to crawl through the phone and strangle that guy. But then again my dad needs that job. We all do. Strangling him wouldn’t help anybody. So many people are unemployed, we have to hold onto what we have because we could so easily have nothing. 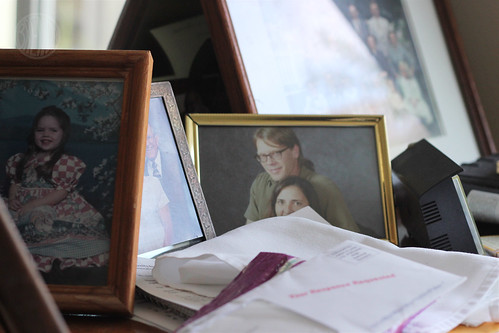 I feel guilty for having my camera with me at my grandpa’s in this dark time. I want to capture his last moments and hold onto them forever but it feels like I’m documenting death and it’s such a private thing. I don’t know if he would want you to see him this way. He’s never minded being on this blog before but I just don’t know and I can’t ask him. So I take some pictures of his brightly lit cheerful room and put my camera away. The rest I’ll remember with my mind’s eye. 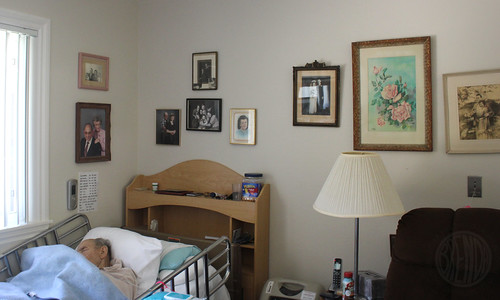 I wish he would wake up and say goodbye to us and then drift off into sleep forever. Why is he hanging on in this strange state? He probably can’t help it. Is he holding on to this earth for something or is it just his body on autopilot waiting to run out of gas? I’ve tried to figure it all out in my mind a thousand times. Everyone goes differently. I look at the hovering nurses wishing they had answers but if they did they don’t share them with me.

At one point the nurses wake my grandpa to give him more morphine and my dad takes advantage of the moment of lucidity and says, “Brendy and Bug are here with me.” Grandpa opens his eyes and looks down at Bug. He gives her a big smile. The biggest smile I’ve seen on anyone in days. Of course my camera wasn’t ready for that moment, it was packed away in my bag. But I’ll remember that smile forever. He knew us. He smiled at Bug.

Bug never knew my grandpa like I did. She didn’t know the man who tucked us in so carefully with sheets and blankets and chairs put up against the side of the bed so we wouldn’t roll out in the night. She didn’t know about the cool scooters he bought for my brother and I at a garage sale and how he fixed them up so they rode so smoothly, better than any scooter they make today. She didn’t know what it was like to visit him in his workshop and smell the oil and sawdust of his tinkering. She did love him though. He’d make funny sounds with his mouth for her and sit her on his lap, just like he did with me. So many memories… I could write pages and pages. 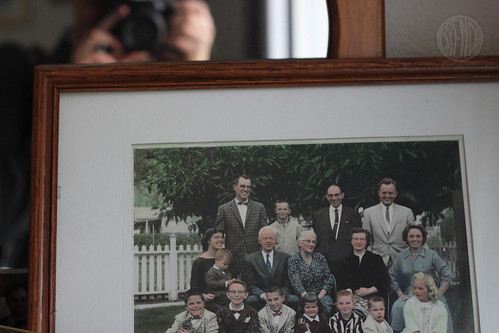 I know she’ll remember that smile and it’s probably what we’ll talk about when we talk about my grandpa from now on.

I did go back again. But there was no change.

It all just makes me think of that one phrase my grandpa used to always say. If you asked him how he was doing he’d smile and say, “I’m pretty good for the shape I’m in.”

I guess he still is.