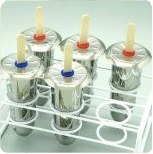 Okay, this is the best thing ever. It’s totally worth the thirty-nine big ones you have to shell out. I blend up all the over-ripe strawberries that don’t get eaten and add vanilla yogurt. It makes the tastiest popsicles ever. You just stick them in the freezer and then pop them out with a quick flick under the hot water faucet to get them out. No sticking, no dripping, just pure deliciousness. If you don’t believe me, ask the neighborhood kids who beg for them at my door every afternoon. Don’t forget to buy sticks too because you’ll need them. Buy the hugest box you can find. They’re that good. 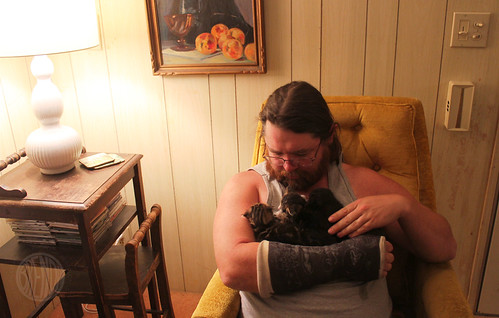 My brother came to town and he’s staying in my house. I love hanging out with him but it amazes me how adding one person to my household can totally screw up my very ordered day. But then it’s my brother so I shouldn’t be surprised. He’s always liked to screw with me.

There are twice as many dishes to wash, half as much food to go around (he eats everything in sight, like a WHOLE BLOCK OF CHEESE IN ONE SITTING!!!!) the bathroom stinks, his room stinks, he stinks (he can’t take a shower because he has a cast) and THERE ARE KITTENS IN MY HOUSE!!! That I am stuck feeding every four hours. How did that happen?!!! 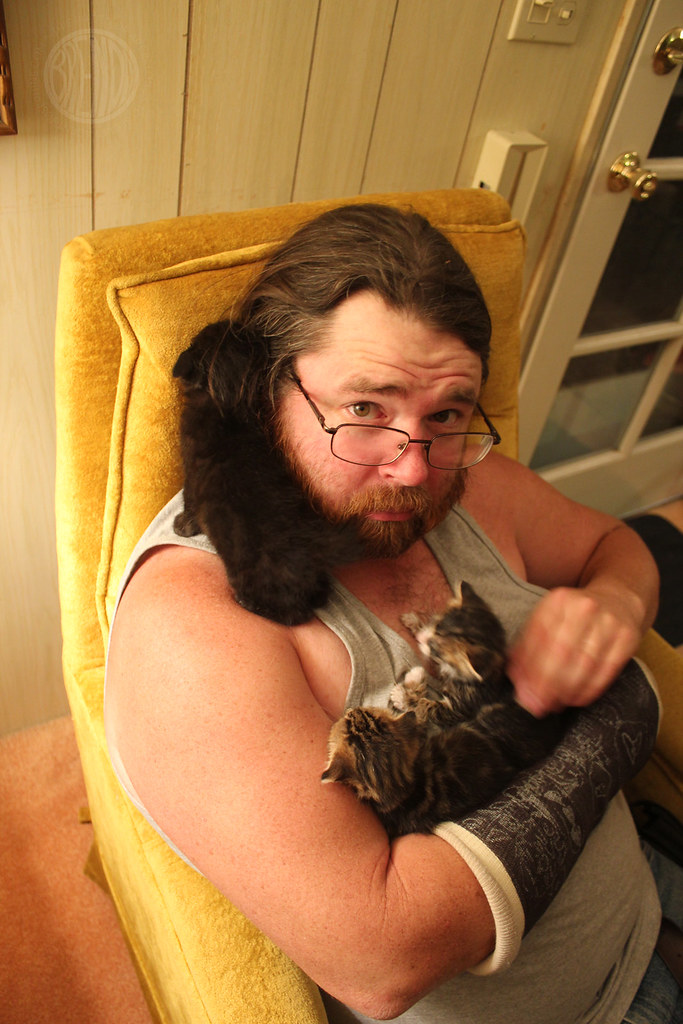 But how could you be mad at this face, right? Of course I’m not. I might sigh heavily and make snarky remarks all the live-long day but I really do like having him around. I find myself forgetting to lock the door at night and then just shrugging, Eh, Shawn’s here. He’ll squash the bad guys with his bad breath.

There is something about my big, bad, little (he’s two years younger than me) brother that dispels all fear. He’s just one of those kind of guys. He can look at other guys and make them whimper in fear. He’s good to have around. Even Bug is minding better. My brother doesn’t even have to say anything, he just raises his eyebrow and she obeys. 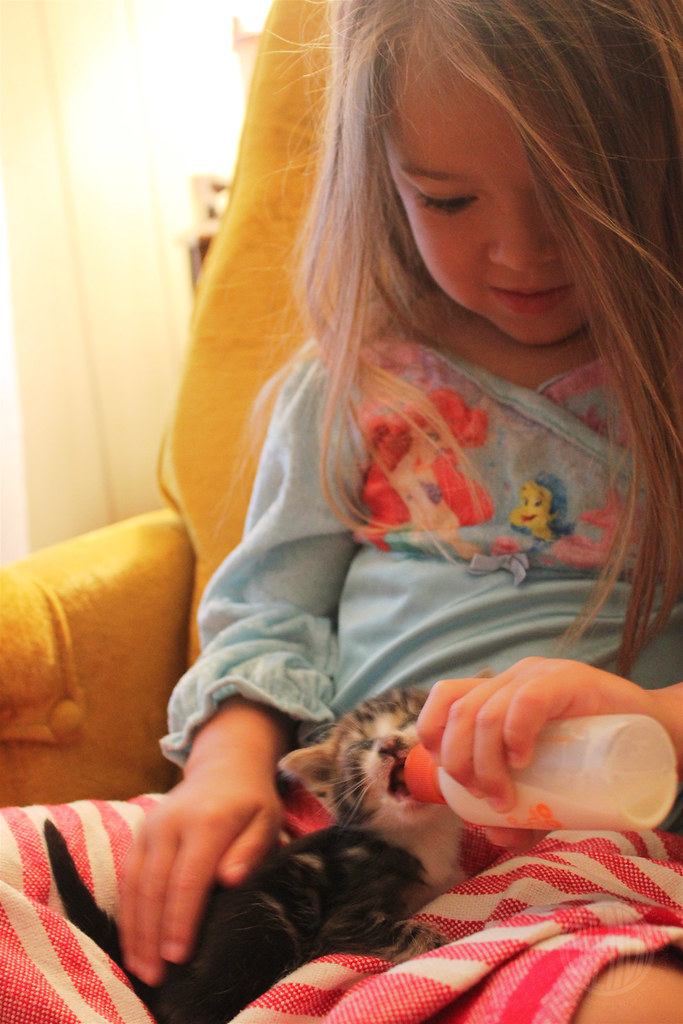 Anyway, you’re probably wondering why there are kittens in my house. Wormy, little, sick, infant kittens with gooped-up eyes who need to be bottle fed. (Yes, we are washing our hands like crazy.) Here’s why: They were abandoned at my mom’s other property by a feral mother cat and we’re just taking care of them until my brother and my mom take a road trip back up to my brother’s home in northern California. He’s got a friend up there who wants them so we are taking care of them until they have a proper home and a much-needed trip to the vet. 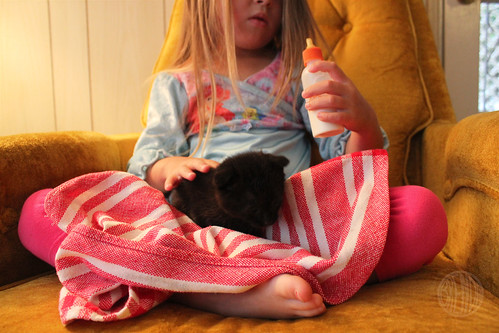 It’s a lot of work but I have to admit I’m falling in love with them. We all are. They started purring this morning. Their little bellies vibrate your whole hand. It’s the cutest thing ever. I’ve gone around and around in my head, thinking that maybe it would be okay to keep one. But I just can’t do it. I’ve been down the long cat life with too many cats and it’s just too hard. They get so sick when they’re old. They pee on the carpet and that smell! It just never goes away.

I vowed to myself that I would never have another cat after we had to put Maddy down. We still have Pounce and Lily at Toby’s house and they are starting to show the signs of old age. It’s going to be hard to lose them. So, I don’t know…it’s such a tough subject for me. I want Bug to have the experience of owning a kitten at least once in her life but I just don’t know if now’s the time. I’m catted out. You know? 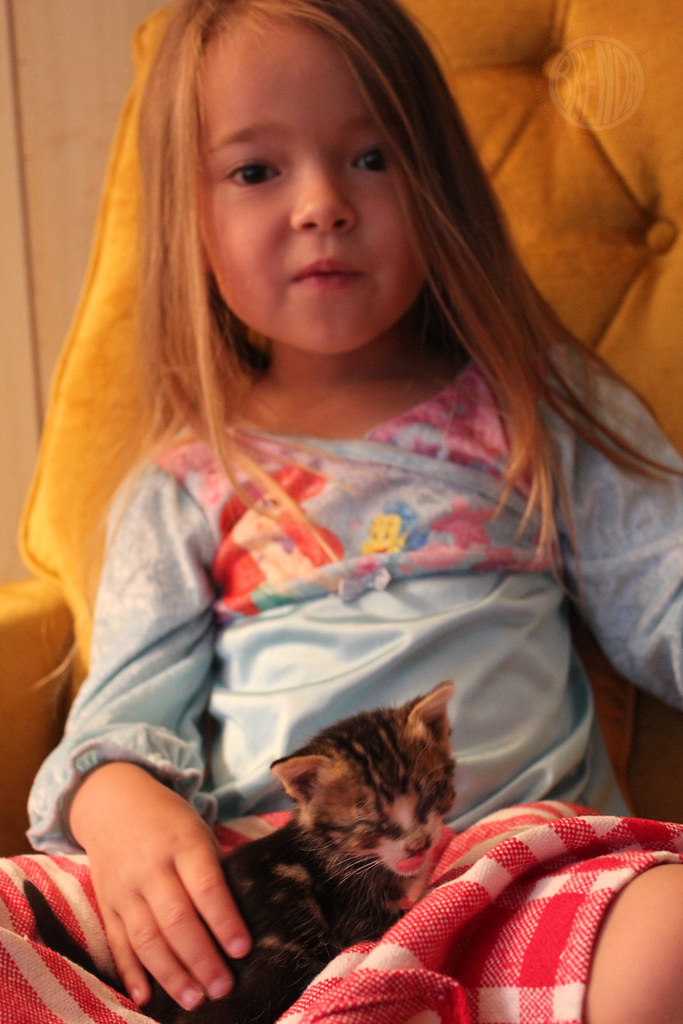 So we’re just enjoying the time we do have with them. And when I have to wake up at 3 a.m. to make them a bottle, I just remind myself that it’s only until Friday and then I won’t have to do it anymore. 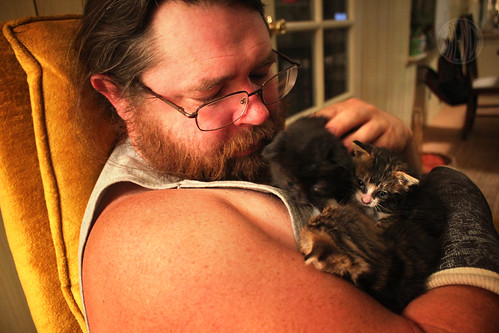 It’s good having my bro’ around too. I’m going to miss the whole stinky lot.

OH! I almost forgot to add there are chickens here too! Weird stuff happens when my brother is around. Chickens, kittens…I wouldn’t be surprised if tomorrow there’s a donkey in my yard. 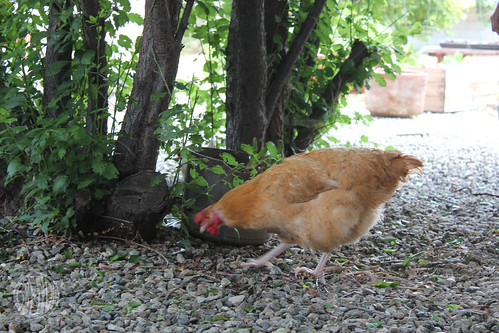 A neighbor in my mom’s neighborhood gave my brother two chickens for free. He’s going to take them up north and start a real farm I guess. So they’re hunting and pecking all the earwigs in my yard until they make the trip up north. That’s going to be one long interesting road trip.