posted in Buddies, Family Matters, the sticks, Tis the Season on December 17, 2010 by SAJ 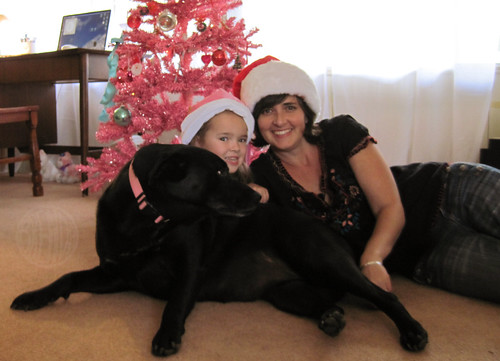 We took our Christmas card photos yesterday. It wasn’t really a big deal. I used my handy dandy waterproof point-and-shoot camera and took most of them handheld. A few were self-timer and then later my mom came to the rescue and took some more. I’m much more casual about our photos than most families I ‘spose. I figure the people I’m sending them to don’t mind crazy candid shots as opposed to something fancy and set up in a studio. Of course studio portraits are always nice but such pain in the butt to pull off. They always boggle me with their packages that never include the poses I want. 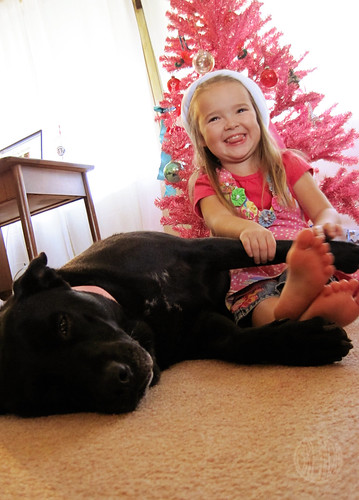 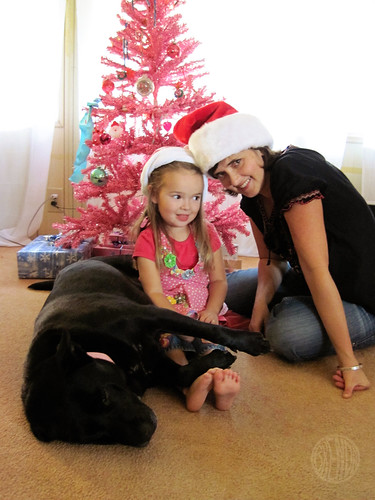 Anyway, I bribed Bug with her advent calendar candy (which she was going to get anyway) and we pulled the dog in too. Holly is such a huge part of our life now. She’s so sweet! She goes everywhere we go. She won’t even leave our sides except a few times randomly to go wandering down the street three houses away. The fence in our yard is not nearly high enough and she lumbers over it without even sneezing. But usually, she likes to stay in the house with us which is fine with me because guess what? She doesn’t stink!!! I’m serious. She’s the perfect dog. 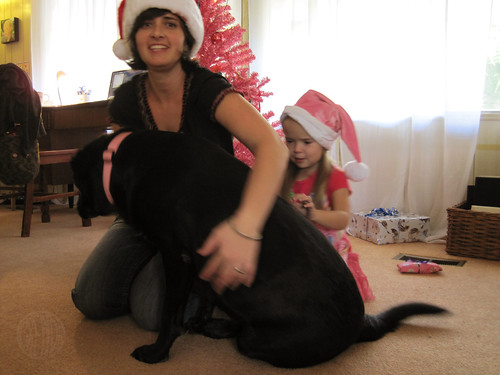 She’s not very good at posing though. And she’s also black, which is pretty much impossible to photograph. Silly dog. 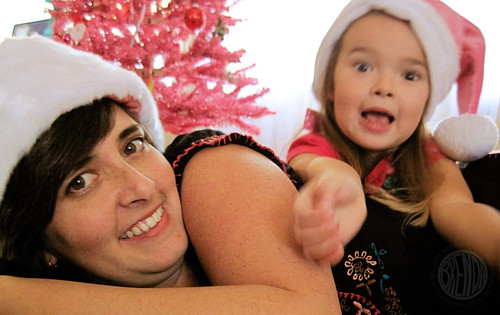 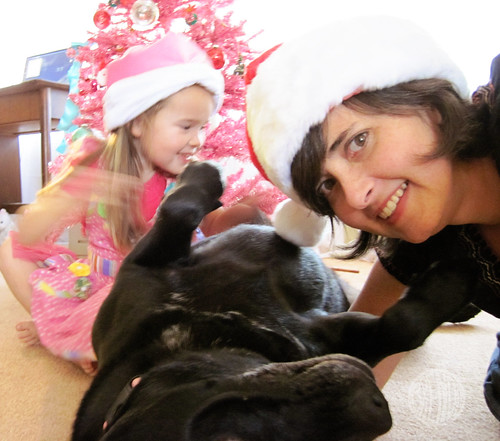 What’s a family portrait session without a million and one outtakes, right? 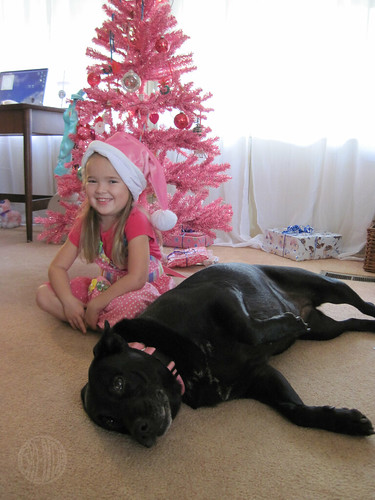 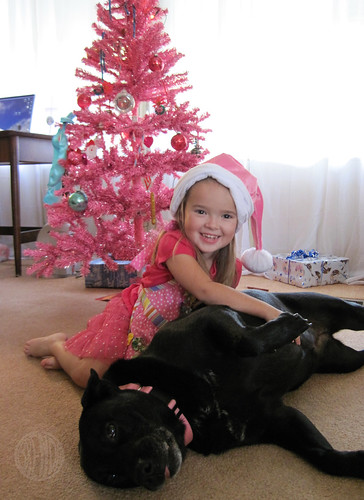 Holly thought it was a family love session. Which it sort of was. 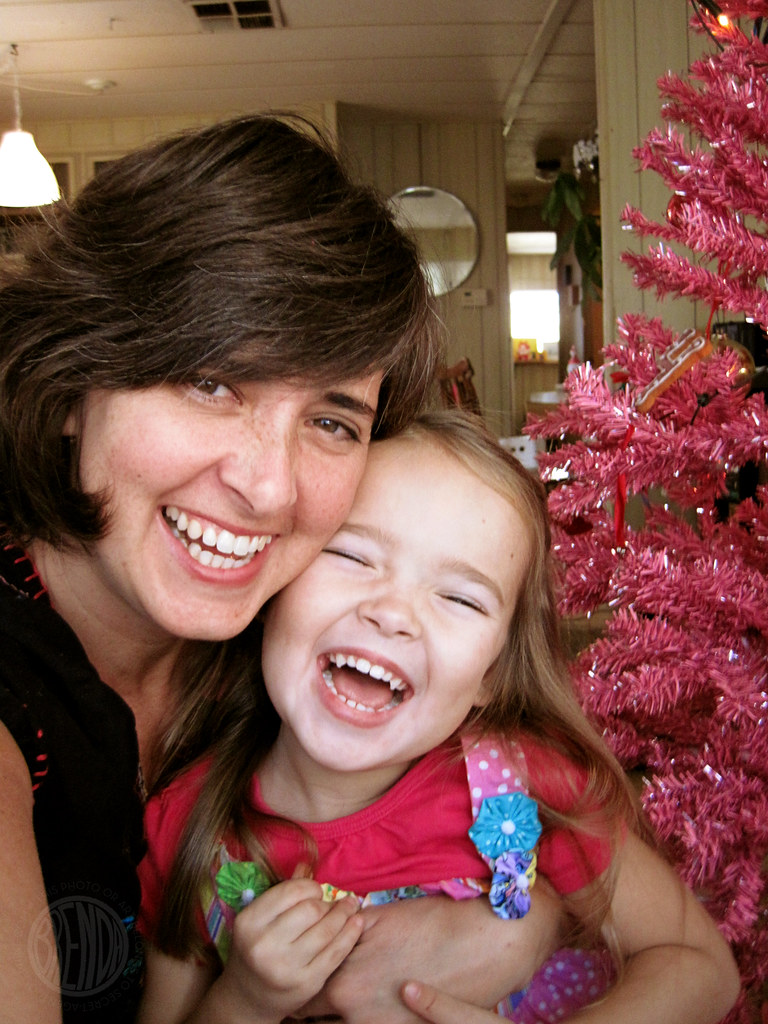 In the end, I love this one the most. Secret of this pose? I was tickling her. How else do you get kids to cooperate in pictures? I ended up designing the card with six of the photos on one card, which is good because a lot of them were blurry and I’m hoping that printing them small will improve their quality. We shall see.

But while I’m on the subject of the dog… 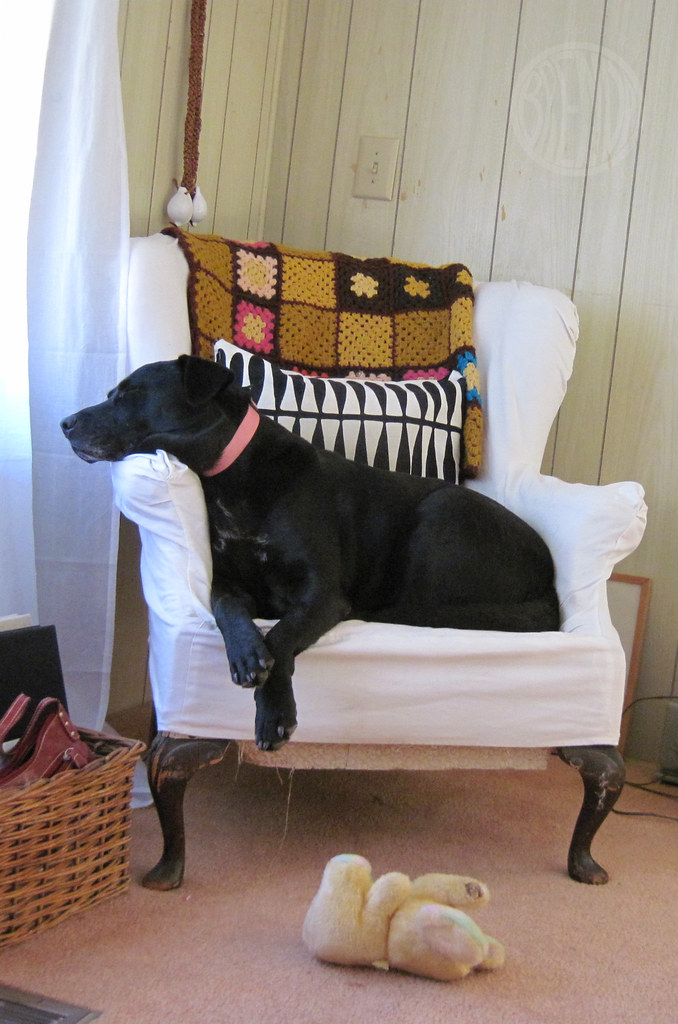 Is this normal? Do dogs normally sit in chairs? 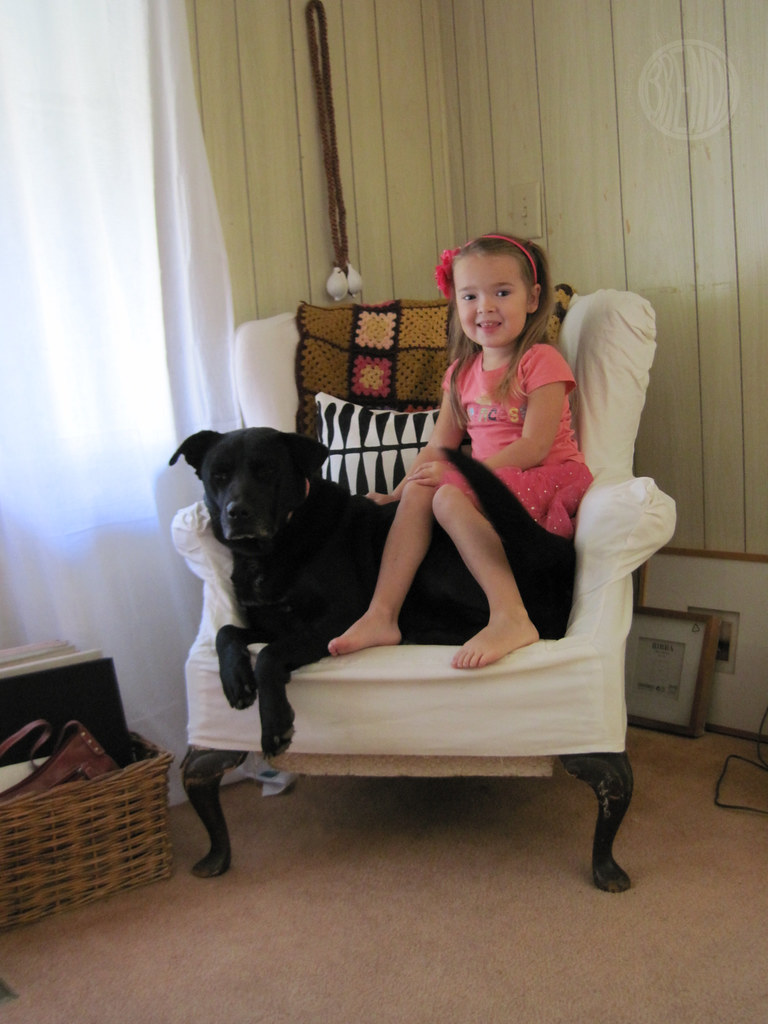 She does it all the time. In fact, Bug was quite perturbed with her because she wanted to sit in that chair and no manner of cajoling would get Holly out of it. Finally, Bug just sat on top of her and Holly didn’t even flinch. She’s such a nutty dog. She doesn’t even like dog treats. We’ve tried them all. She only likes pig’s ears, which are kind of gross. Have you seen them? They are, in fact, an entire pig ear right off the pig. Yuck. I like my food to be a little less literal. But Holly eats them and it’s better than giving her cake so we buy them and give them out on rare occasions. 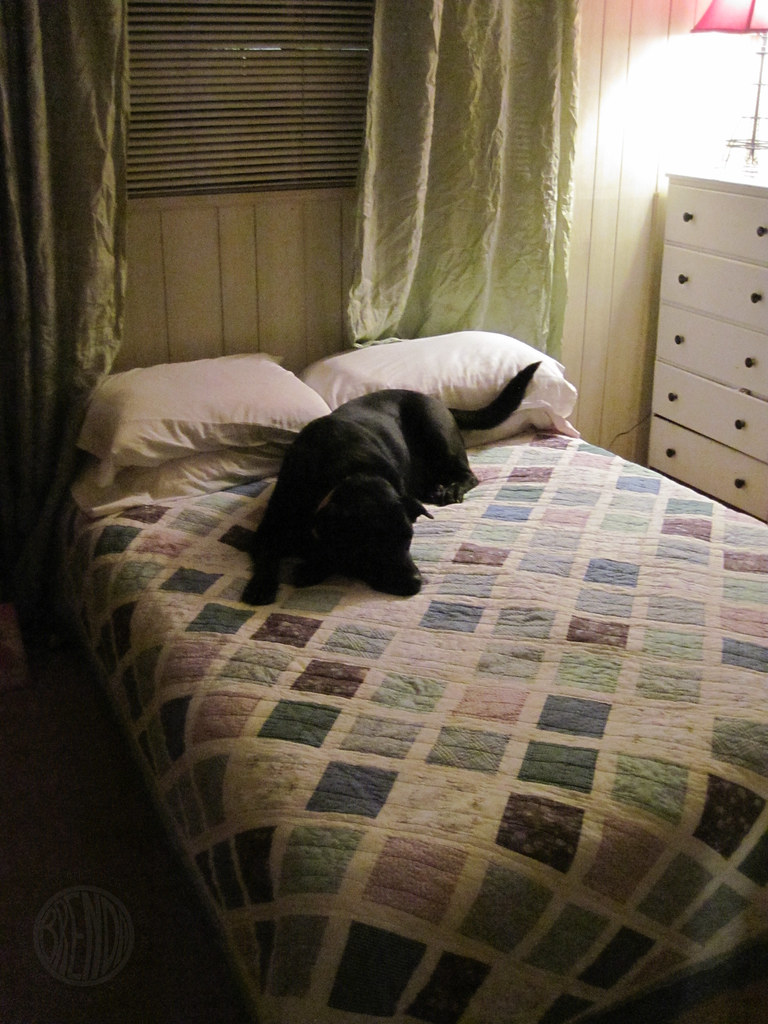 Also this. Is this normal too? She sneaks onto my bed when I’m not looking and likes to take naps there. She knows she’s not supposed to though so when I come in the room scolding her, she guiltily slinks off and flops down on her dog bed with a huge sigh. She totally sighs just like a human. She also snores and farts (but not stinky ones of course). 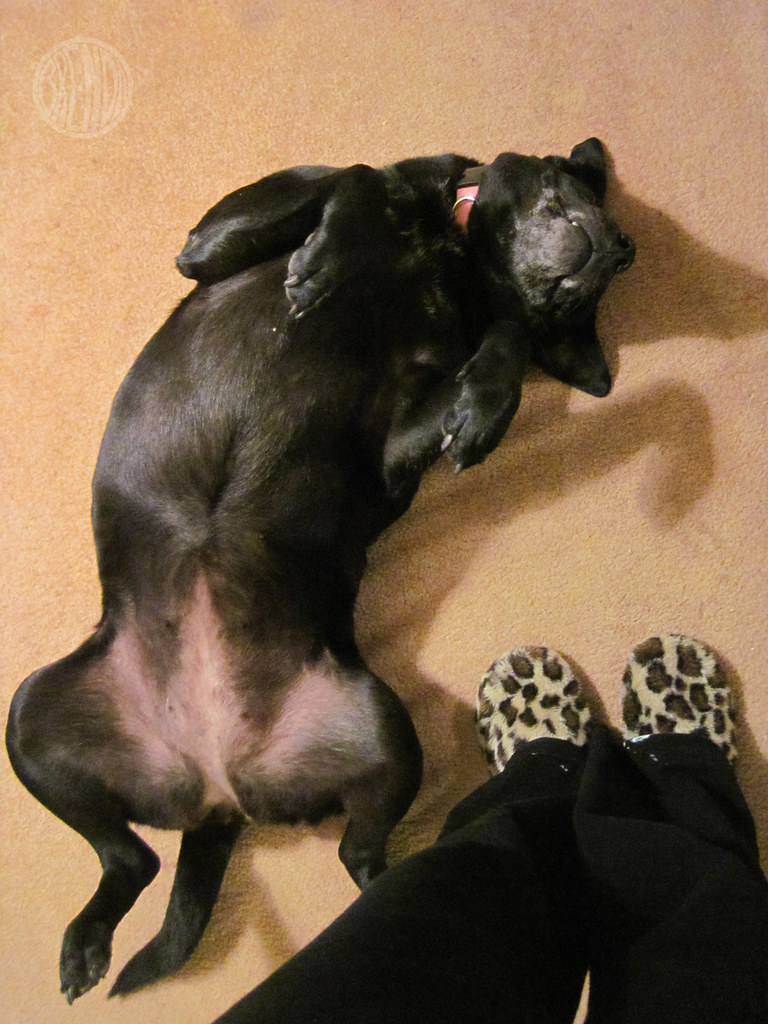 In other news, it has come to my attention that my friend Heather has started a fund raiser for me. She’s crazy! And then, she contacted some big time bloggers (who I am blessed to call friends) and they wrote about it and pretty much blew up my site with all kinds of people coming to see how I’m doing. That’s why this site was down the other day, if you were wondering. Your love done broke my blog.

Anyway, I’m terribly at a loss for words on how to thank everyone properly. People are coming out of the woodwork to donate a few dollars here and there and it is crazily adding up! I don’t have access to the amount but Heather has been sending me emails now and then. I’m shocked and awed and just completely out of the right words. So please help me to stay humble and use this blessing properly.