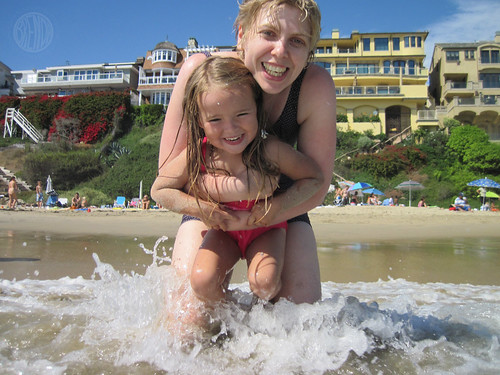 Sometimes when I’m bragging about my blog (or more likely defending it) I like to say a little self-righteously, Well, at least I’m big in the UK! as if I had thousands of fans across the pond. It would only be a small misuse of the truth because while I probably only have a few readers in the UK they are a VERY BIG DEAL!

Specifically, I have the most wonderful loyal reader named Lynne in the UK. She doesn’t have a blog (yet) but she does have a pretty cool animation site and she’s promised to help me animate Secret Agent Josephine someday. Wouldn’t that be fun?

Anyway, Lynne has been reading this blog since way back…back in those days when I wrote embarrassing things that I have since taken down. She’s one of those loyals. And I love her dearly. She’s written here before as a guest poster but most of you know her as Gingermog. That’s what we all call her. We even called her that when she showed up at my house and we went to the beach. You should have heard Bug hollering out, “Gingermog!” on the beach. It was pretty funny.

Anyway Gingermog and her husband and her friend Barbara were out for a visit this last weekend. We took them to the beach and got smashed by some small but mighty waves. The beach was hot and packed with tourists but that did not stop us from having a really good time—the FULL California experience, as I like to call it.

There really is something invigorating about sitting in the sun with a passel of people, getting all hot and sweaty until you can’t stand it a minute more and then washing off all the sweat and grime with the most bracing cold salt water. It’s even better if the wave is surprisingly big and knocks you around a bit. You come out of that ocean a whole new person.

I challenge anyone having a bad day to try it. 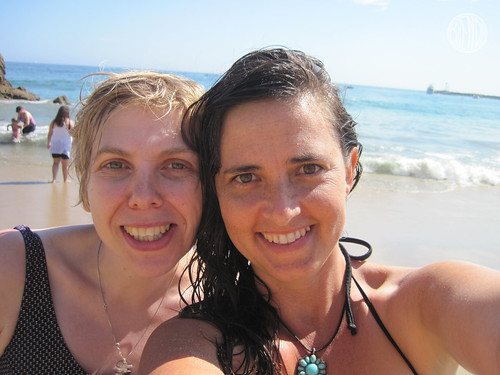 This would explain my horribly styled 80’s side part and eyebrows that are not combed upwards like they are supposed to be. I just got tackled by a wave! But you know what? Who cares! At least we are in our bathing suits (or swimming costumes, as Gingermog calls them) and having fun. 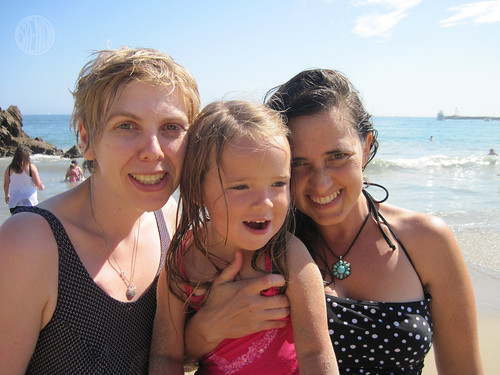 I think the best part for me was dinner. I thought we should all go out to eat because I didn’t really have anything planned and I badly needed to go grocery shopping. Toby didn’t agree since (he hates restaurants and) he recently treated everyone for my birthday lunch and he was still sort of recovering from that. He suggested I just make some fresh pasta and reheat some old Chicken Cacciatore sauce I had in the refrigerator. It sounds terrible that I would serve my guests leftovers but they are pretty good leftovers so I reluctantly agreed.

After the beach, we walked to the small market by my house and picked up some lettuce for a salad, some berries for dessert and a can of whipped cream (thanks to Gingermog) and a couple of bottles of red wine (thanks to Barbara). Apparently, that’s all you need for a good dinner with guests.

I’m sure the wine played a large part but we had the best time. We ate on the floor, (on my terribly stained carpet that I fret about entirely too much!!!) gathered around the coffee table and talking. Who needs chairs!? Bug pulled out all the stops, of course, doing cartwheels on the couch and just plain being silly. It was a great night. 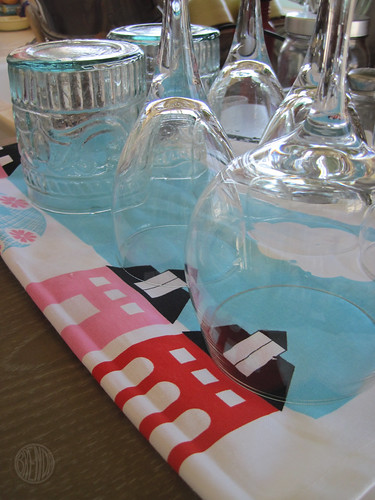 Gingermog gave me this tea towel. I need to take a better photo of it because it has red double-decker buses on it and it is so very British. I love it. I almost don’t want to use it but Gingermog promised to send me another one when this one gets stained. So I’m going to use it everyday and remember the good times!