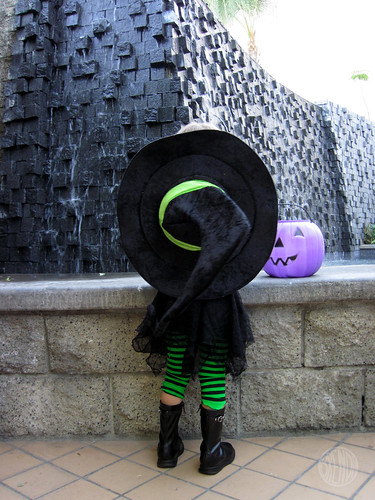 I guess we didn’t think Halloween was scary enough this year so we had to top it off with a trip to the ER during the height of H1N1 hysteria. What? you say. Yes, it was some Halloween. But don’t worry, we are all okay. We just had a lot of sickness going around.

First, I got food poisoning a few weeks ago. That lasted a day or so but I snapped back like a valiant warrior. Then we went to visit my mom a week later and my brother, my niece, my dad and Bug all caught some sort of horrible stomach virus. They mostly staggered their sicknesses so there was always somebody to take care of somebody else.

I was secretly hoping that my food poisoning was the same virus so I could be immune to the puking. I mean, really, TWO bouts of puking in the same month? That would be ridiculous. But then two days later, when I was visiting Bethany, my lunch suddenly revolted on me and I spent the night sick. I’m getting to be a pro at this vomiting gig. Too bad I’m not getting a baby out of the deal. 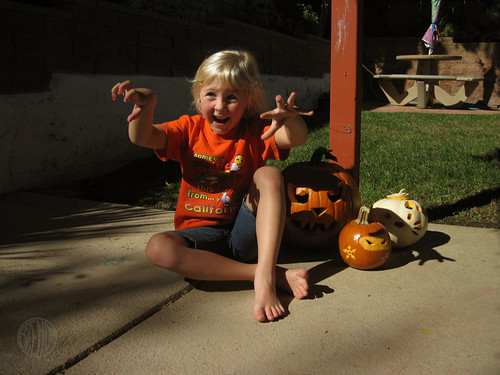 Thankfully, the virus going around is only the 24-hour variety. By Halloween day I was able to limp my way through pumpkin carving. I did have a bunch of fun activities planned for the kids but there was no way I could pull those off.

Bethany and her mom saved Halloween for me. While I napped and moped about, they watched Bug and put together a festive lunch. It smelled really good but unfortunately I wasn’t feeling up to eating it.

By the time 4 o’ clock rolled around, I felt well enough to go trick-or-treating with the kids. I was worried about spreading my germs so I washed my hands a zillion times and I made sure I didn’t touch anybody other than my own kid. 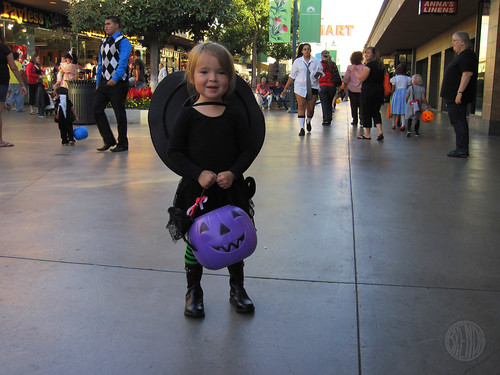 We decided to do mall trick-or-treating this year. It’s not my favorite kind of trick-or-treating but considering I wasn’t feeling 100% it was fine. It was fun to see all the other kids in their costumes but it was also a little crowded. Bug and Annalie didn’t mind a bit. 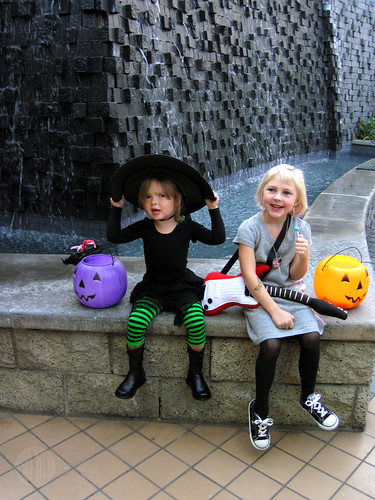 What happened to the Ninja costume? Well…at the last minute Bug decided she wanted to be something “sweet.” She’s been doing that to me a lot lately. I’ll pick out an outfit for her that is all green and she’ll declare she wants to wear all pink and she wants to wear red shoes with sparkles and Hello Kitty socks. I can’t win.

I had the witch costume on hand of course because up until last week she had wanted to be a green witch. I brought it with us to Bethany’s because I had a feeling it might be warm on Halloween and I know my kid is not going to wear a full head-covering mask if it’s hot. She’s a cute ninja but without the mask she’s just a cute kid wearing all black. So witch costume it was. We’ll save the ninja costume for dress-up parties I guess. 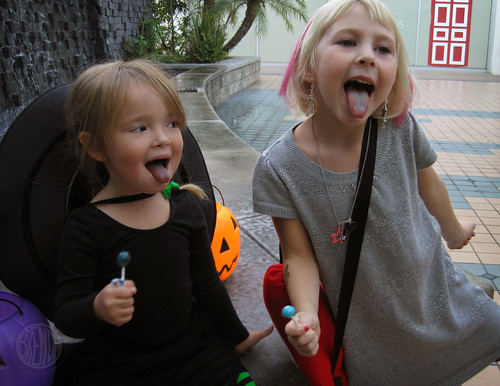 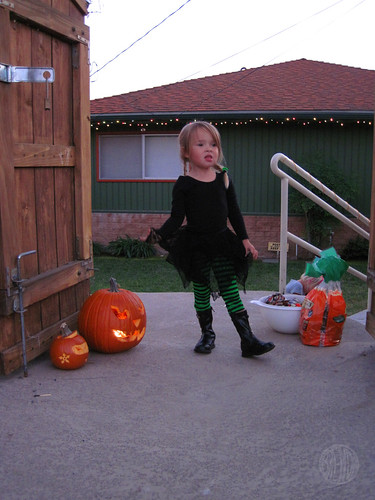 Then we went home and the kids had fun running around in Bethany’s front yard and occasionally calling out for trick-or-treaters that didn’t really come. I wasn’t really paying attention but I think Bug ate about five pieces of her candy. At least that is how many I unwrapped for her. It’s more than she usually has but I wasn’t really worried about it. It was Halloween after all—the one night you can indulge on candy. They also had popcorn and carrots and broccoli as sort of a snacky dinner since they had had a big late lunch.

Around eight Bug and I decided to call it a night. And that is when things went suddenly wrong. First Bug said she had a tummy ache. I figured she just ate too much candy and she’d get over it. But after about a half an hour her tummy ache turned into screaming and holding her stomach in pain.

I thought it might be gas pains so I instructed her to turn from side to side so the air could work itself out but she couldn’t even do that. I tried to hold her to comfort her but she wouldn’t even let me touch her. Her stomach was bloated and hard as a rock.

She was so tired she’d start to fall asleep and then a wave of pain would overtake her and she’d sit up screaming. From all the crying and hyperventilating she ended up vomiting up everything she had eaten since lunch which made matters even worse because she’s still pretty freaked out about being sick last week. So there she was standing up half asleep and crying because she was afraid if she laid down again she’d vomit. I didn’t know what to do. Horrible visions candy poisoning were flying through my head. I tried to call her doctor but I couldn’t get through.

Finally I called Toby and somehow through the screaming we were able to agree that I should take her to the emergency room. It was a pretty hard decision to make because the last place I want to go on Halloween night is the ER.

Bethany drove us because I was out of mind with worry. I know the way to the hospital near Bethany’s house but I was so distracted I kept thinking I’d take a wrong turn or something. I was so thankful to have a friend just take over for me. I owe Bethany so much for Halloween night and my story isn’t even done yet.

Strangely, the car ride to the hospital seemed to calm Bug down a little bit but she was still clutching her tummy and crying. This emergency room was a really nice one. We were lucky. There were people in costumes and one baby with a bloody nose but thankfully no stab wounds or vampires or anything. What did freak me out was everyone wearing masks. Not costume masks but the kind you wear when you don’t want to spread germs—specifically H1N1. I wanted to put one on myself and Bug but I knew I wouldn’t be able to. She was already freaking out pretty hard from the pain, being up way past her bedtime and being in a strange place.

The triage nurse was really nice. In hindsight, she was almost too nice. Now, days later, Bug is still re-enacting the whole night and asking to go back to the hospital so the nice nurse can stick a sticker on her finger and make her feel better. Which is sort of funny I guess.

That’s really all that happened at the ER. No shots, no x-rays, no stomach pumping. All we did was check in, take Bug’s temperature, check her pulse by “sticking a sticker on her finger,” weigh her and then go sit in the waiting room for two hours. I sort of thought this might happen but you just never know. I figured a triage nurse would know better what to do in this situation than I did.

After a long half-hour of crying and clutching her stomach, Bug finally relaxed completely onto my chest and fell asleep. I could tell she was better. She had been tense and rigid before but now she was flopped onto me like a rag doll. She woke up once and whimpered but it wasn’t the same as before. I called Toby to see if he thought I should just take her home but he was already on his way to the hospital to meet us. He said to stay just to see if she woke up in pain again, so we stayed.

When Toby got there he poked and prodded Bug’s stomach until she woke up. You’d think she’d be screaming about being woken up this way but she was surprisingly pleasant. She actually started babbling and talking about all the “toots” (farts) she had. So that was it. All that screaming and tummy-holding was just horrible gas pains. I have never been so relieved in my life.

I walked up to the front desk and signed us out. Hopefully since we never walked past those swinging doors that lead to the hospital beds we won’t be charged for our two-hour sitting session in the ER. And hopefully we didn’t catch H1N1.

I would love to end the story here but it’s not quite the end. Toby drove himself back home. Bethany and Bug and I went back to her house. Bug and I pretty much went straight to bed. Bug wanted to stay up and chatter away but I had a headache that felt like someone had put an axe in my head so I rolled over, stuffed a pillow over my head and fell dead asleep.

Then completely unbeknownst to me, Annalie woke up with the pukes. Poor Bethany. She just spent two hours in the ER and now she got to come home to stay up all night with a sick kid. I wish I had known they were up. I would have offered to help. It’s the least I could do since it was my kid who thew up all over her handmade quilt that is on the guest bed. But I slept right through it all.

The next morning I woke up feeling like a hundred bucks since the stomach virus was finally done with me and hey, isn’t it wonderful that we aren’t in the hospital!!? I made myself a cup of coffee (because I do feel that comfortable at Bethany’s house) and walked upstairs with Bug to say good morning to whoever else was up.

You can imagine my surprise when I was greeted with the site of Bethany’s mom sleeping on the couch with Annalie beside her holding a freshly washed puke bucket. I could instantly tell it had been a rough night.

You’ll have to read Bethany’s version to get the rest of the story but I’ll spoil the ending by saying I think at this moment all of us are well. But somebody better quick knock on some wood. 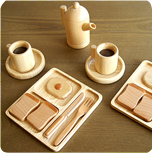 Something so cute I think I am craving a sip of wooden coffee!!! Oh my word. Look at the eggs! If Bug didn’t already have FOUR tea sets I would be searching the internet over to find this set for her. Or maybe just for me. Swoon! Note to self: Visit Japan before you die. Also, learn Japanese. Spied via Spoon & Tamango but from somewhere else before that, I just can’t remember where!