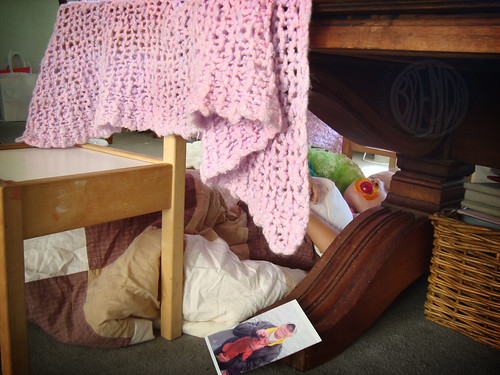 We’ve been talking about camping lately. I know with my recent posts about my brother it might seem that something like camping would get scrapped off the agenda, but we are optimistic that the doctors will get to the bottom of things, and that life can and will go on as normal for my family.

Also, while I take little mini-vacations pretty much every month, Toby slaves away in his office dreaming of the day he will finally get to stop working and spend a week up north away from his ever-ringing cell phone, camera and computer. So barring any terrible news from my brother, we are scheduled for a possible end-of-the-month trip up to a lake in Northern California where Toby’s parents have a leased cabin.

Bug took our camping talk seriously and has been building practice tents in the living room. I helped her drape her knitted blanket over the end of the coffee table but she arranged everything else herself—the chairs, the blankets and of course a photo of her Uncle George because part of this camping trip includes a visit to where Uncle George lives now. (He lives up north now and has been supremely missed by Bug.)

Bug loves her Uncle George. She carries his picture around the house quite frequently and was very upset with me today when I told her that she couldn’t send it back to Uncle George. Why did she want to send it back? Because she had decorated the entire back of the photo with stickers.

I tried to explain that the picture was hers and if she sent it back then she wouldn’t have it anymore but I don’t think that made a lot of sense to her. So if you are reading this, Uncle George, you can look forward to several sticker-decorated postcards. If I remember to send them, that is. I’ve got “letters” to Uncle George stashed everywhere around the house and I’m secretly wondering if Uncle George might appreciate it if I recycle them into something else maybe.

Toby got wind of Bug’s little coffee-table tent in our living room and thought it was time to introduce Bug to our real three-man tent. I love our three-man tent. We used to go camping in it all the time way back in the days before we had a kid and life got so complicated. Not that kids complicate things—well, they do—but you know, working and saving for a house and taxes and all that grown-up responsible stuff). That tent brings back so many good memories for me. I need to dig up those old archives and peruse them for my own fun. 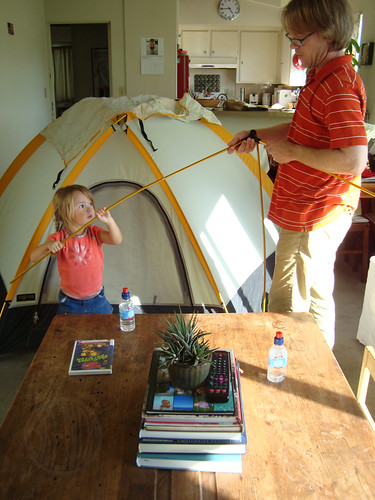 Bug was just as delighted to see the tent as I was. She helped pull it out of its bag and then carefully held one end of the pole as Toby showed her how they snap together, end to end. Her eyes were so big. It was like the circus came to town and decided to stay in our living room! 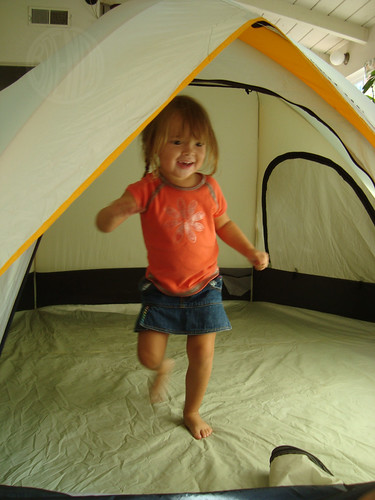 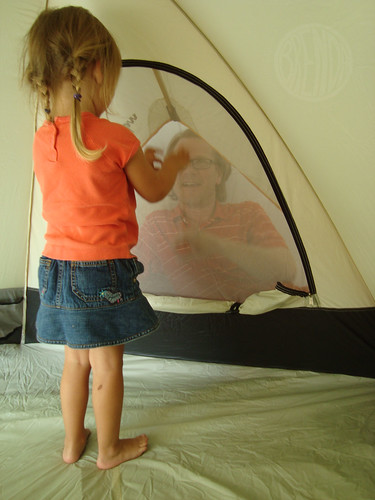 Once it was set up she ran around inside for probably ten minutes straight. She and Toby adjusted the windows and zippered and un-zippered the door. They talked about rocks and sticks and what her job will be when we really set this thing up outdoors. They talked about campsites and firewood that doesn’t come from the grocery store. That last thing really blew her mind. She’s never seen a campfire outside of the beach fire pits. 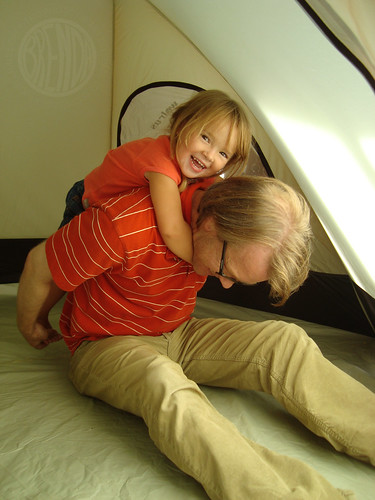 Setting up the tent was a pretty great father-daughter moment which makes me want to go camping for real even more. It’s going to be tough to swing it. We’ll have to budget for gas and a hotel stay on the long drive up and back. I already tried to sell Toby on camping here locally but he would have none of it, being the Northern California native that he is. So we’ll see. It could be really great and when we come back maybe the doctors will have figured out what is wrong with my brother and he’ll have his job back and life will go on as if nothing bad ever happened. We can hope and pray. 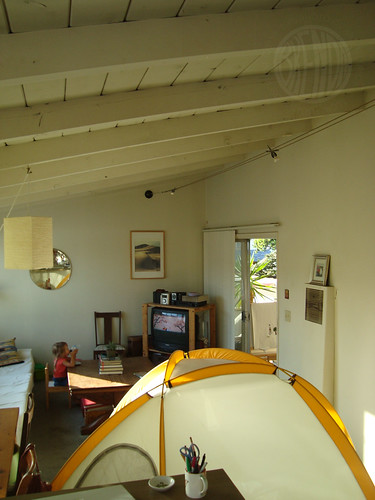 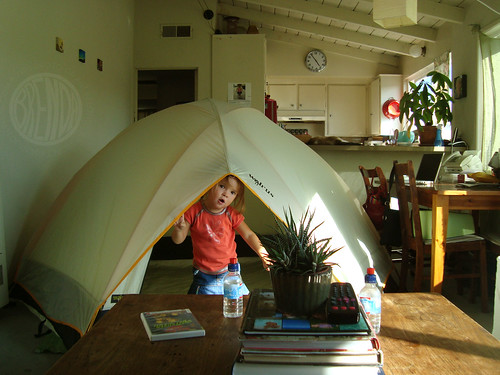 Now what to do about this tent that has eaten my living room? As you probably guessed Bug wanted to live in it 24/7. Thankfully, Bethany gave her a kid-sized play tent for her birthday last year so I quickly took down the three-man tent and put up her much smaller kid tent. She was mildly sad but got over it when I showed her that she could watch movies inside the tent. 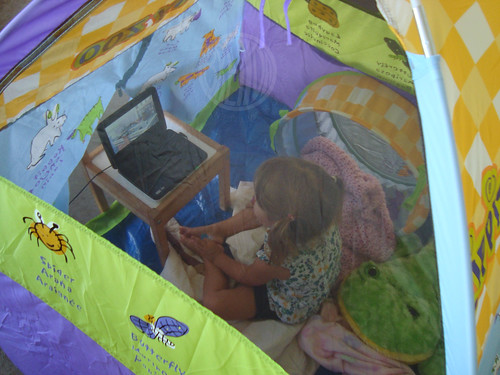 I’ll probably have to take it down tonight when she’s asleep, though. The last thing I want is for the novelty to wear off. Because if we do go camping as we’re hoping to do, that means we’ll be at the lake without television, without the internet and without movies for more than a week! We’re probably going to get a little sick of that tent. Of course we’ll stay in the cabin too but there won’t be a whole lot of things to do so we’re planning on camping in the tent for fun.

Ten days without the internet?!! (Technically less than that since hotels have wifi but still!!!) Can I do it? 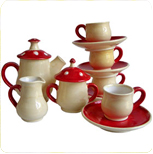 Something toady just for tea! Found at Mahar Dry Goods.