posted in B reviews, Buddies, Family Matters, the sticks on August 14, 2009 by SAJ 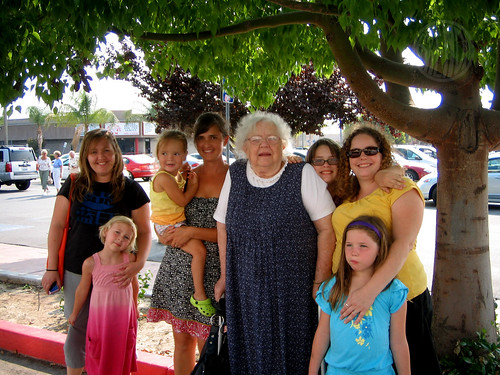 Yesterday we went to see Julie & Julia (which I’ve been looking forward to seeing for quite a while now) and my Grandma came too! How cool is it that? My Grandma is a blogger, she’s old enough to appreciate Julia Child in her day and she likes to go to movies with her granddaughter and friends. I think we might have to make a tradition out of it if there are enough suitable movies to see.

I was a little worried since I read the book and I knew there would be some f-bombs dropped and some sex scenes alluded to. Not exactly the tea party you would take most grandmothers to but my Grandma took it in stride. I guess she’s wise and has probably seen way worse things in her life. I looked over at her often during the movie and she was chuckling along with the rest of the audience. My Grandma is just plain cool.

But the funny thing was, when we showed up for the movie there was a line around the building. It wasn’t opening night or anything. It was a Thursday, in the middle of the day, in the STICKS! So what was so special? I’m still not sure but it had something to do with seniors. When we got inside, the theatre was packed and everyone had white hair. There were elderly people with canes and walkers and oxygen tanks. I guess it was Senior Day at the theatre. I had no idea there was such a thing. I thought we’d have the theatre to ourselves. It was all fine other than the fact that we had to sit in the front because we got there late (which was not really late at all but I guess seniors on more on top of the early bird deals than we are). In fact, I sort of liked the running commentary from the retired couple beside us.

It was a great movie for all ages. Well, except the eleven-and-under crowd. But we had a plan for them. While Bethany, CC, my grandma and I ducked into Julie & Julia, my nieces, Bug and Annalie got to go see G-Force with my mom. I’m so glad my mom likes those kiddie movies because I do not one bit. I just can’t get into movies with real life animals talking. I think Space Buddies killed it for me.

So that was that: a fun day for everyone. I should probably share about the little melt down that Bug had in the bathroom at the theatre while my mom was watching her…but just thinking about it makes me tired. I think I’ll save that for a post all on it’s own. Bethany actually wrote a post about Bug and her meltdowns regarding the bathroom for me a while back and it’s sitting in my drafts waiting to be posted. So you have that to look forward.

In the meantime, go see Julie and Julia. It was great!