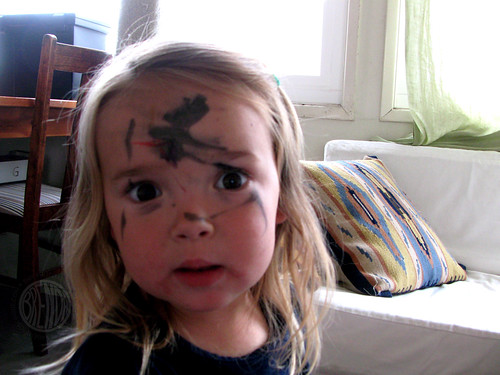 You know the face-painting Princess Mariposa thing has gone a little bit too far when your child starts drawing on her face with marker pen and then cries bloody murder when you force her to wash it off. I even showed her what she looked like in the mirror and she still insisted that she wanted her face left like that. Boy am I in trouble if she still likes this look when she’s old enough to get herself permanently inked. That thought just sent a shiver down my spine. 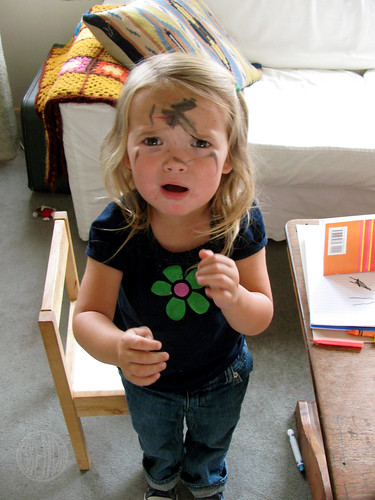 So I took the markers away and that went over like a lead balloon. She’s had it coming though. We’ve been going round and round about marker pens for weeks. I’ve always thought it was okay for her to have marker pens so young because she’s my kid. She’s an artist. She’s going to grow up drawing with all media and why should I hold back?

My mom never let me have marker pens until I was some ridiculous old age and I remember wanting them SO BAD!!! I think I even remember vowing to myself that when I was a parent (someday off in the distant future) I would let my kids draw with marker pens no matter how young they were…or something like that.

So I guess this is what I get: a kid who draws all over everything and herself. What did I expect? It’s not like I didn’t know it was coming. There was that one time that SuperChic drew eyelashes on herself with Sharpie. (CC! Where is that photo? I can’t find it anywhere!) If that isn’t a warning to me then I don’t know what is.

But really it’s not that bad. I do expect her to draw on herself and I will usually let it slide. It’s my own fault for not watching her more carefully while she is drawing. But I had to take the markers away this time because last time I told her if she drew on anything other than paper, I would. So she’s on marker pen restriction for a week.

She was very very sad. I stood there feeling bad for her and decided that I didn’t really want the day to go as other days have gone with me snapping at her all day so I broke out my box of art supplies and decided to make masks with her. If she wants to be Princess Mariposa so bad why don’t we make a Princess Mariposa mask!? 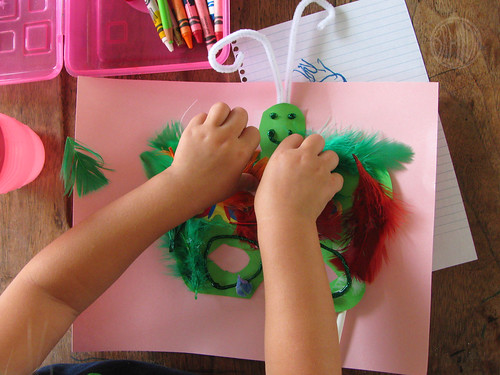 It was a brilliant idea. Except for the part where Tuesday was a super busy day with appointments at the car dealership and a dental appointment for me. But whatever! Bring on the craft supplies!

Once the glue and feathers and sequins were out all thoughts of banished marker pens fluttered away like a happy green butterfly. In fact we both had so much fun we made several masks! I think if I hadn’t needed to rush off to the dealership to pick up my car that had been in for service, we could have made masks all day. 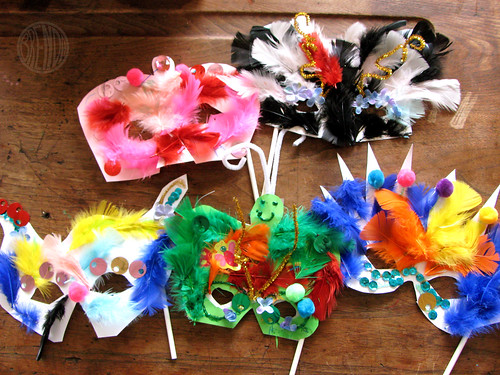 There’s no real how-to on these. I cut out symmetrical shapes from card stock and then cut eye holes in them. We taped a lollipop stick on the back as a handle since I didn’t have any elastic thread on hand. The decorating was pretty much a mess of Elmer’s glue and whatever we could find. I did use the glue gun at one point to attach the heavier items but that was purely because I have a glue gun handy (like right here in my kitchen drawer!) and I am not afraid to use it. 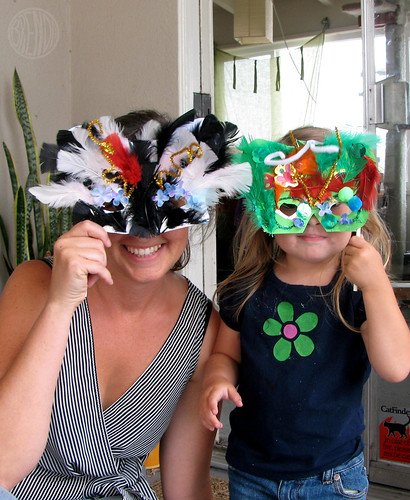 I think we will be doing this again. It took little to no preparation and kept us both occupied for at least an hour. I think this would be a great party craft. Maybe we’ll have to throw a masquerade ball one of these days. 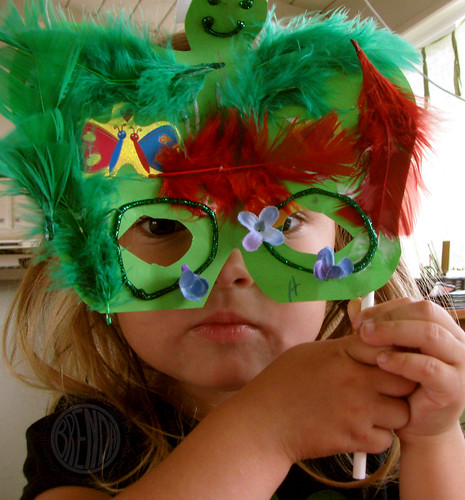 I have a feeling Princess Mariposa will be making her appearance quite often.