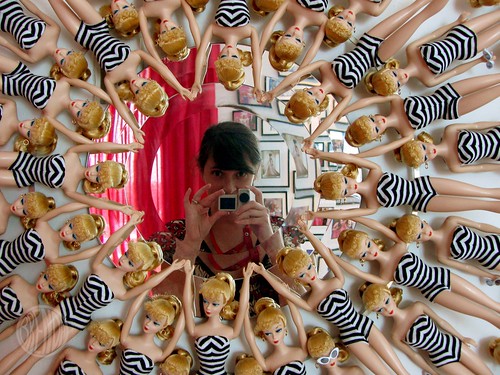 Did you know that Barbie has a real house in Malibu? A real beach mansion that you can walk around and take pictures in? I didn’t either. It’s pretty cool. It’s not actually Barbie’s real house. It’s a rented beach house that Mattel hired a famous interior decorator (Jonathan Adler) to decorate in honor of Barbie’s 50th birthday. Yep, Barbie is 50. She looks pretty good for fifty.

I don’t know how I got on the invite list to tour the mansion but when I got the email, I didn’t hesitate to say yes. Blogging has its perks and this sort of invite is not to be sneezed at. I did feel a twinge of guilt though because I’ve never really been a huge Barbie fan. I never even had a real Barbie doll until I was 14 and then it was only because I had this fantasy that I was going to grow up and be a fashion designer. I made clothes for her and decorated a drawer to look like her house, but I never really played with her.

I do have a daughter now though, so I’m a little more open to all things girly. I also have a crazy pink-loving niece who is a huge Barbie fan, so I said sign me up! 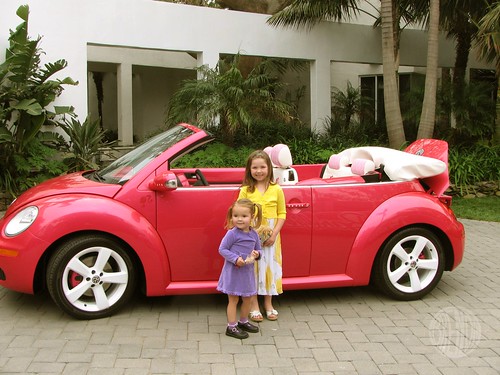 We got all dolled up in our fanciest outfits and set off to party like blonde bombshells. Just kidding. We weren’t invited to that party. (That was the night before.) This party was more of a tour of the house and a tea party in the back yard which is exactly our speed. 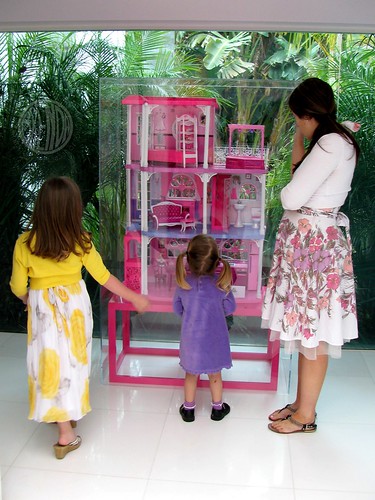 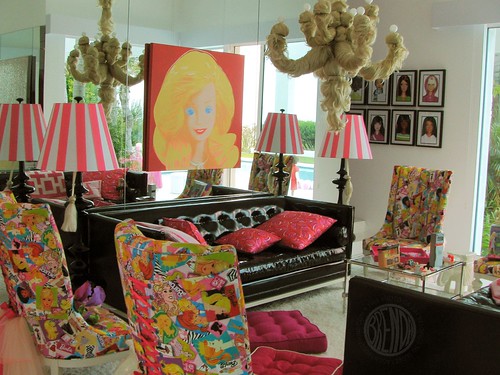 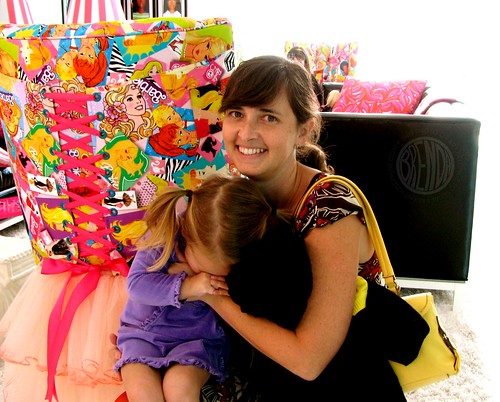 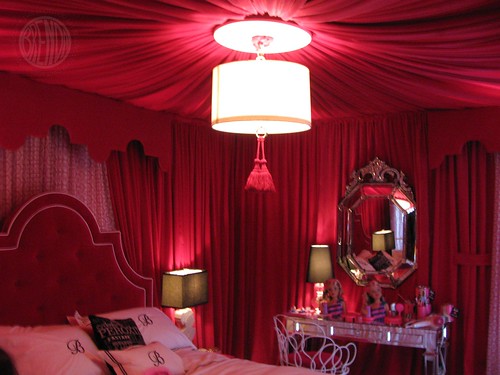 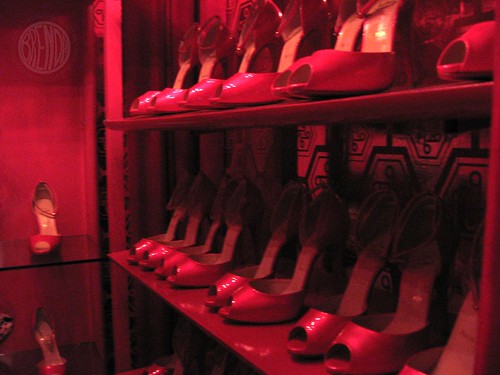 It was really cool to see so much Barbie memorabilia that has been collected over the years. From the famous Warhol painting to the scary Project Runway Barbie-hair chandelier to the petticoated chairs and beyond. Everything was blinged out in pink and the letter B—which is cool for me since I’m partial to that letter myself. 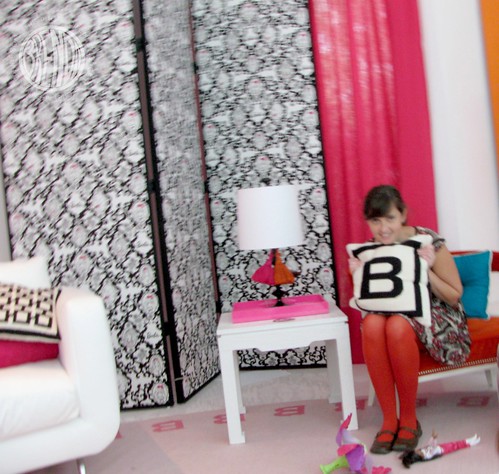 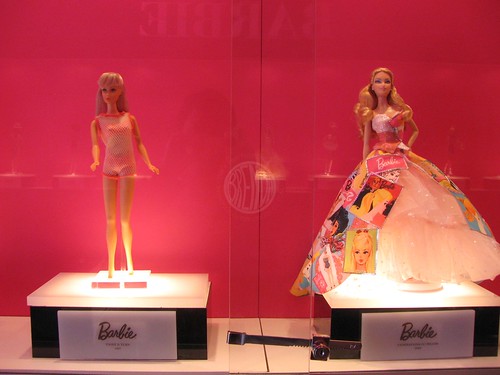 I really like the older dolls. I wish I was one of those girls who collected dolls and kept them all nice in their boxes. Le Sigh. I don’t think my rock collection of quartz is ever going to have any value. 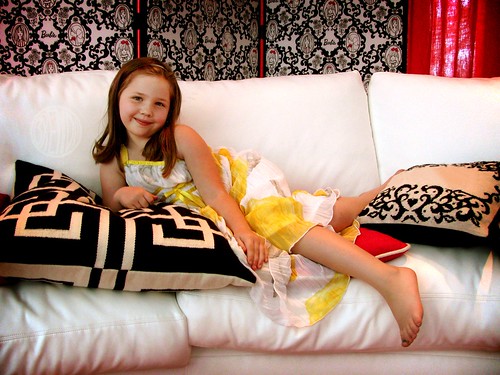 My girly-girl niece, SuperChic, was in heaven. She’s been walking in pink plastic high heels since she was two so this was a dream come true for her. If anyone can channel Barbie, it would be Superchic. I think the only thing that disappointed her about the whole event was that Barbie never showed up. She kept asking me if Barbie was going to come to her party and I had to say that sadly, I didn’t think so. That was okay though. SuperChic has enough diva personality to make up for the missing birthday girl. 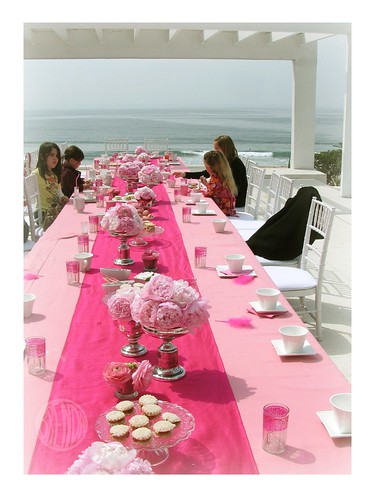 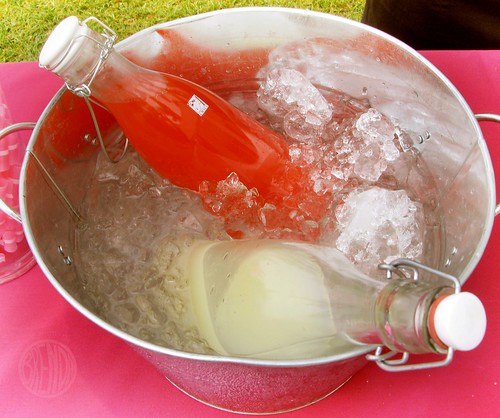 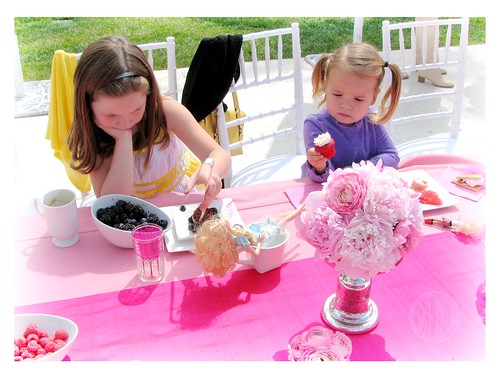 After the tour we were invited to a tea party in the backyard overlooking the Pacific Ocean. It was a bit of an overcast day but that didn’t hamper the fun at all. We drank strawberry lemonade and munched on pink macaroons, red velvet cupcakes and berries dipped in whipped cream. Then for dessert (as if we needed anymore sugar) there was a s’mores bar and cylinder vases filled with pink candy to snack on. 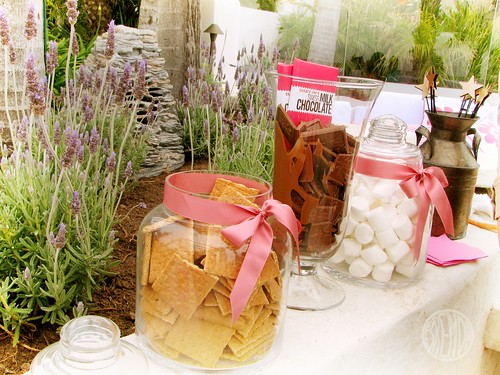 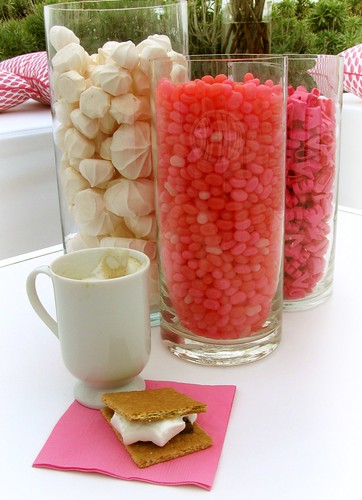 (The Barbie shoes were not edible but I was tempted!) 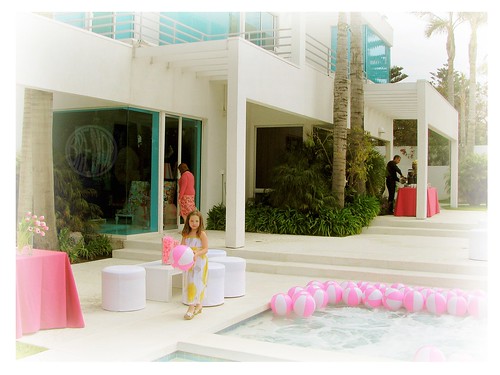 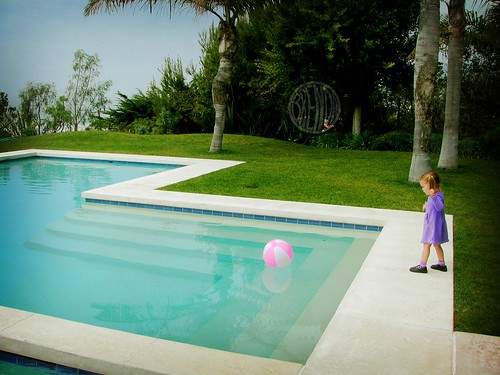 The staff treated us like celebrities. The girls ran around wild and no one complained about them playing with the pink beach balls that decorated the spa and pool or leaving Barbie parts strewn across the living room. It was all very interactive and fun. There was even a make-your-own lip gloss station but I got kind of weirded out about germs and wouldn’t let my girls sample their concoctions. (I know, what a meanie.) I figured there were plenty of other fun things for them to do. They can make their own lip gloss at home someday. 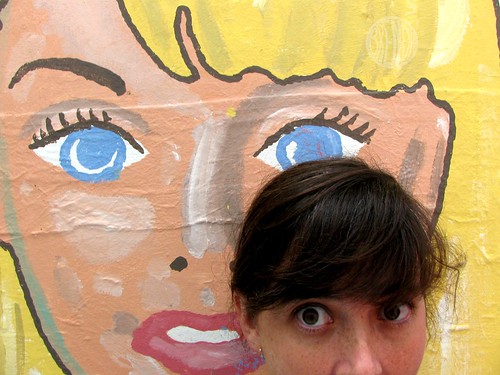 Between the sweet things to eat, the nail-painting station and even a Barbie movie to watch, we had plenty to keep us entertained. It was really a treat. If we weren’t fans of Barbie before we entered the house, we certainly were by the time we left.