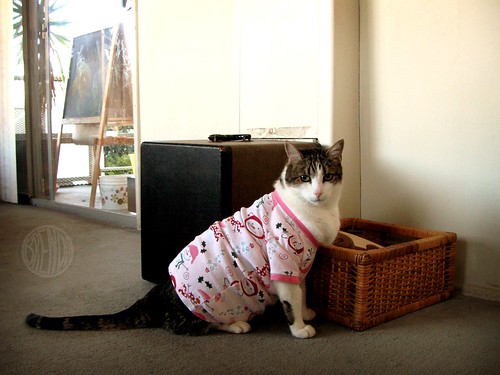 Back in the days before blogging, (a long long long long time ago) I used to keep photo albums. I loved collecting photos and arranging them on a page. I was good at it too. I’d cut out little heads and add in captions, I’d save ticket stubs and arrange them fondly. I was a scrapbooker before scrapbooking was something you could buy in a package at Michael’s.

I also used to take my photo albums to work and force my co-workers to look at them while I carried on a runny (Runny?!! Ha ha. Freudian slip.) running commentary about each photo. What a dork! Why would I think that my co-workers would want to look at photos of my cats?!! (I’m looking at you, Mh64.) Sure, I had vacation photos and artsy-fartsy macro shots of seashells and stuff but still…it’s hard for me to believe that they all sat around so patiently perusing my photo albums with me. But they did! I don’t know, maybe we were all just bored in cubicle-land.

Then blogging was invented and I never needed to have a photo album again!
The end.

Now I just show everyone on the internet photos of my cats and my kid and everything else in between. But the good thing is that you all don’t have to pretend you are interested. You can click away magically and I’ll never know! How cool is that?

Since it’s 7days and eleven (or so) of you said I should share my competitive creative self-portraits here (I’m not counting the 1,608 clicks who didn’t say anything. Your votes don’t count.) I was thinking I might as well just post all sorts of random photos and take a kicked-back approach to blogging this week.

[Except yikes, it took me this long to get to my point. I guess I’ve defeated my purpose and this blog post is just as long and rambly as any of my regular posts.] 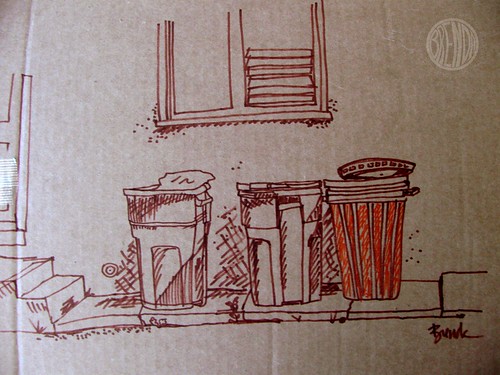 This is a picture of the trash cans outside our house. Why would I draw trash cans? Well, it was a beautiful day and Bug decided she wanted to draw outside. At first I was resistant. It’s not like we have a yard that I can corral her in. I didn’t want to lose her markers or crayons or random sheets of printer paper all over the neighborhood. But how can you say no to a kid who wants to draw? It would just be wrong to say no. I thought drawing outside might be a great way to introduce her to nature drawing.

But she wanted to sit on the wall in the alley. The little short two-foot wall of cement that sits across an alley OF CEMENT opposite a row of trash cans on cement. No nature in sight except the weeds growing up through the cracks in the CEMENT. So we sat and enjoyed the sunshine on our backs and I drew trash cans. She drew circles. We drew on cardboard because we found a stash of it in the dumpsters behind a nearby frame shop. They were a good surface because they were hard and would stay rigid on our laps like a desk. Also, they didn’t blow away in the nippy spring breeze.

It was fun. I think we’ll do it again. Maybe next we’ll move on to drawing the mailbox or even…A TREE! 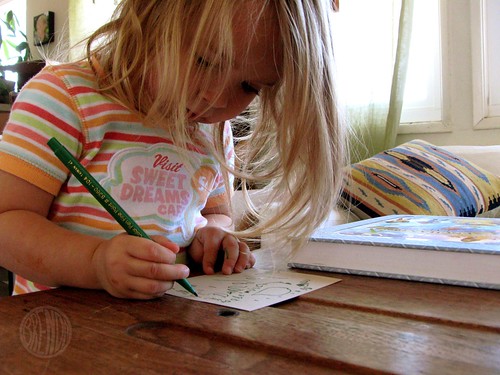 Next up is a picture of Bug writing a letter to Uncle George. She’s so funny when she writes. She punctuates each stroke with a word as if she were really writing a letter. Her letter went something like this:

“Dear Uncle George, We are going to the movies. Thank you for playing with me. You are funny. Have a very nice day.”

Or something like that. Of course I didn’t pick up the camera and film a movie of it until after she had said something really funny. But I did get a cute movie.

writing a letter to Uncle George from secretagentjo on Vimeo. 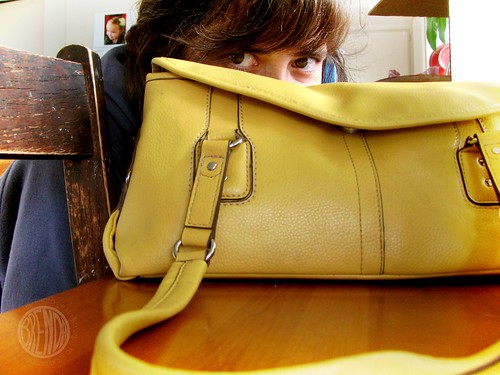 And lastly is my 7days photo from yesterday. I was supposed to post this yesterday but I fell asleep like usual. I’m such a tired mom all the time. It’s so annoying. But at least I get my sleep.

This is a purse my fairy-godmother friend, Susan, bought for me a while back on our blogher trip to San Francisco. We were at Ross and she was spoiling everybody rotten as she always does and she sprang for this yellow purse that I had spied. It didn’t seem that fashion-forward at the time but here it is a year later and I get compliments on it all the time. I guess yellow is a happening color. I like the purse. It’s soft and simple and I don’t lose things in it.

That’s all folks! I’m off to Bethany’s for a few days. I’m sure I’ll be posting more fun photos from the Actuallys’.