posted in raving lunatic rant, The Hood, urban life on September 19, 2008 by SAJ 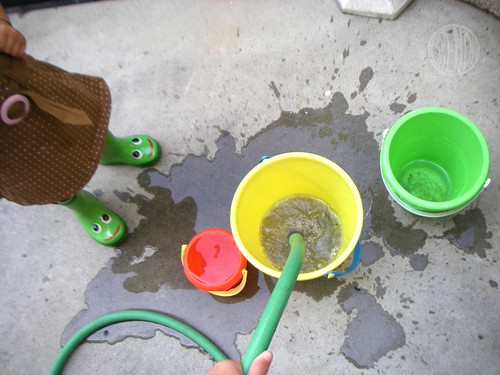 The other day, as I was hustling Baby Bug out the door with a cup of coffee in one hand and her buttered waffle (that she refused to eat) in the other, I saw my landlady’s tell-tale half orange half brown curly head out of the corner of my eye. She was lurking at the bottom of the stairs as she is wont to do. She always does this. As I tried to talk Baby Bug into wearing shoes (which is like trying to push water up hill), my crazy landlady quickly disappeared around the side of our house.

I did what I always do. I pretended I didn’t see her. I’ve learned over time that visiting with my landlady never goes well. You could be the most perfect tenant on earth with nothing to talk about other than how much you love living here (in spite of your ten-year-old rug that is covered in so many stains that it scares your friends and neighbors away) and she will turn the conversation around to some thing that you need to do in order to keep her property nice and then she’ll tell you that you look like you are putting on weight. Are you expecting another child? etc etc…

She does it every time. She’s just funny that way. It’s not like she means to be mean. In fact, she is quite doting and will tell you that you are her favorite tenant. She even gave us $50 off our rent as a present when Baby Bug was born. She does things like that. But she’s also like that Grandmother who smothers you with love and then sticks you in the back with a giant guilt-trip covered knife. Except in her case, she would stick you with the knife in the front because she’s not that subtle.

I chalk it up to her foreignness. She comes from Guatemala and according to her, she became a wealthy landowner scrubbing one toilet at a time. I believe her. She’s very tenacious like that. If she wants something done, it gets done. I’ve seen her in action. When she hired men to put in new stairs for us and a new floor in the kitchen after the plumbing debacle, she rattled off strings of staccato Spanish that made them quiver in their boots. She’s only five feet tall but she means business. 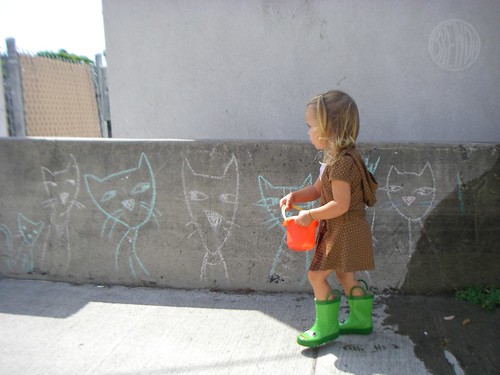 Usually our conversations with her run along the lines of: You-should-take-better-care-of-my-falling-down-piece-of-property-because-I-am-very-nice-to-you-and-let-you-live-here-for-very-cheap-rent. Which is true. So we endure her crazy requests. Like the time she made me get rid of my garden because some of the leaves of my plants touched the wall and THE BUGS could crawl up those leaves and into her house! Or that time she handed us a 12 oz. can of bug killer to get rid of the termites that infest every house in our neighborhood and swarm like bees every time the weather gets above 80 degrees… I could go on and on…

Anyway, you get the picture. She’s just whacky. But you have to love her because we do pay half of what everyone else pays in rent around here. She spends half the year in Florida visiting her sister and only shows up every six months or so with some crazy request. As long as we never have to ask her to repair anything, we’re fine. We have a don’t-ask-don’t-tell policy. We fix our own problems, usually. 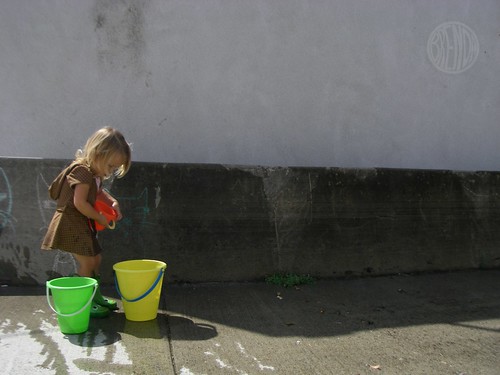 So back to my story.

I finally got Bug into her shoes. We’re clambering down the stairs, me holding my coffee with the buttered waffle balanced on top and Bug bouncing off my other hand like a tether ball. It’s our usual controlled-fall-down-the-stairs routine. I was about ready to toss the waffle into the trash at the bottom of the stairs but of course Bug had not eaten anything for breakfast that day (part of her every-other-day food strike) and I knew the minute I got rid of it she would start crying that buttered waffles are the only thing on earth that she would eat. I’ve been through this before.

I turn the corner to head to my car and who do I see? My landlady of course. She’s calling my cell phone on her cell phone but my cell gets no coverage within a mile of my house, so her call is not going through.

I smile and try to make small talk while Baby Bug runs around me like crazy and I end up dropping her buttered waffle face down on the dirty cement. Could my morning get any worse? Of course it could! Ha ha!

In her usual style, my landlady gets right down to business. Apparently, someone in the neighborhood has called her to complain about the “graffiti” that Baby Bug and I chalked on the sub wall that divides our alley from the restaurant we live behind. According to “someone anonymous,” our chalk drawings of cute little cats are bringing down the neighborhood. (What?!!) 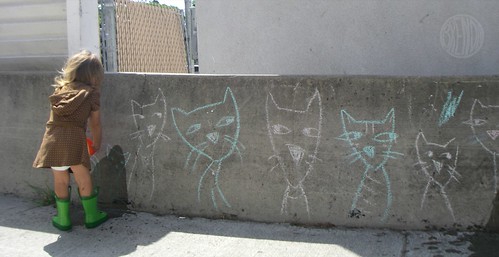 It’s like the Crips and the Bloods moved in and any minute now we are going to set up shop selling crack! If you look really hard you can see the cats I drew are pointing to the meth lab (with their eyes!). See these wipes in my diaper satchel? They’re actually soaked in LSD.

I’m being sarcastic, in case it wasn’t obvious. Sometimes these things don’t read as well as they sound in my head. But seriously, what harm are my little kid drawings doing to anyone? What kind of neighborhood do we live in if we can’t draw chalk on the sidewalk and occasionally up the side of a dirty old cement wall?!! Is it any worse than the urine stench from all the people who stop their limousines here to use our alley as their own personal hidden bathroom?

I told her as much and she shook her head in agreement. What kind of crazy world do we live in? Orange County, obviously. You can’t own a car older than ten years around here without people raising their eyebrows, but if you want to molest your children in private that’s totally okay. If you don’t mow your lawn they run you out of town with pitchforks. Good thing we don’t have a lawn. 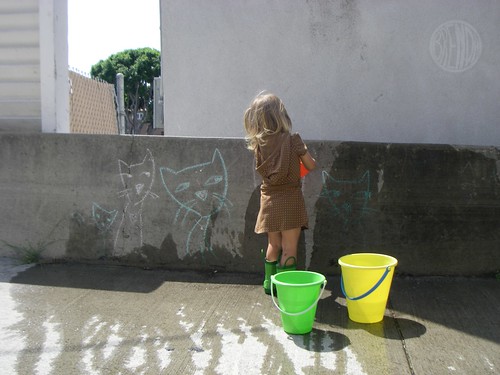 I’ve been thinking about her claim though. It just seems a bit fishy. Why would someone anonymous call her to complain about graffiti near our property? She lives on the next block over. How do they know she owns our apartment? Are these things registered with the city? Did the city call her? Why wouldn’t the city just give us a ticket? It all seems very weird.

Especially since she just happened to be on our property anyway to let in a plumber into our neighbor’s house (also her tenant). While she was there she took the liberty to rearrange my watering hose, break off a few leaves from some of the plants that were dangerously near the stucco walls of our house and pretty much meddle with things. 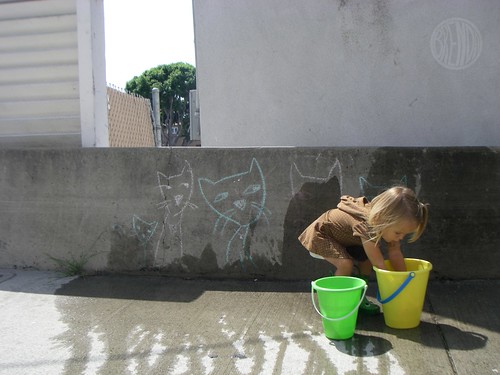 I’m thinking she didn’t like my silly cartoon drawings and made up this story about someone anonymous calling to complain. It’s not exactly her straightforward style but it is whacky, which is very much like her.

Regardless, the chalk drawings have been up there since Memorial Day. I don’t think they were hurting anything but maybe it was time to take them down anyway. They have been there all summer. Maybe in someone else’s eyes I am that neighbor who puts up a million tacky Greek goddess statues (of which my landlady has two).

I don’t like my landlady. She’s not my favorite person in the world to talk to. But if washing the chalk cats off the cement wall keeps her out of my hair, I’ll do it. I’ll do just about anything for cheap rent.

And yes, she did tell me I looked like I’ve been putting on weight and my skin is too dark like I’ve been out in the sun too much. She’s right. I have. I have been eating pancakes every morning with abandon and genetics are a bitch. Her truthfulness hurts like a dump truck running over my toe but if she can’t tell me, who can? So I’m just going to write about it here, try to drop 250 calories from my daily intake and dodge her next time I see her.