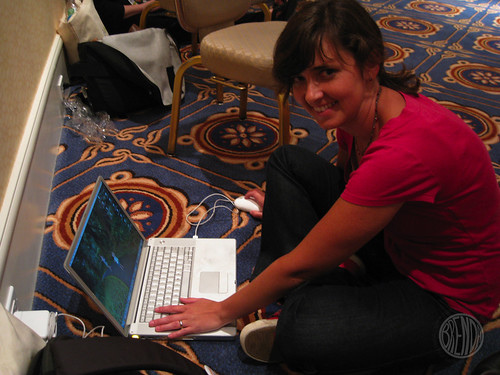 Here I am sitting on the floor in a session on day two trying to write a post about day one. I’m a little worse for wear so you’ll have to forgive me if my super-hyper-I’m-having-so-much-fun edge has worn off. Not that it hasn’t been fun here. It has! Too much fun maybe. The roar of all the crazy talking makes me feel like I need to go get a scream canister and store some of it up Monsters, Inc.-style. I could probably power a whole city on the sheer energy of talking that is going on here. 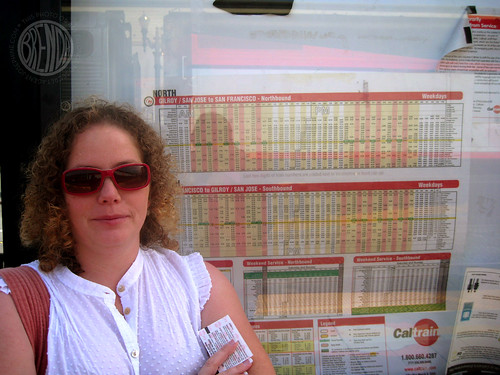 I’m also a little worn out because we had a crazy adventure last night in regards to our transportation home from the convention. We opted not to stay in the hotel and in many regards that is a big drag. But on the upside, we are staying with a very good friend and I know our kids are having a blast there.

However, getting to the city from our friend’s house is not as simple as you would think. When you look on the map it looks like a hop, skip, and a jump. It’s actually a long train ride followed by a short train ride and a lot of train-schedule reading which we apparently are not very good at. 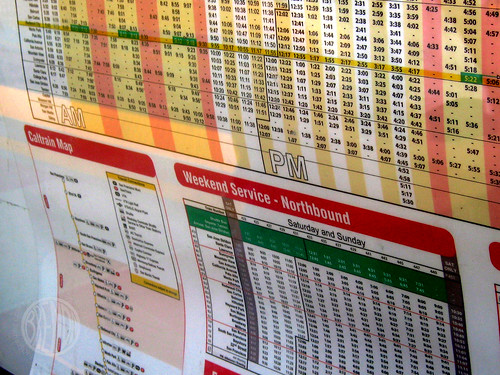 I shouldn’t speak for CC but I was horrible at reading this schedule. I would stare at it for several minutes, thinking I had figured out what train was coming at one time, and then—poof!—that information would fly out of my ear like a fart as soon as I turned around. Everyone else seems to be able to figure these things out and they have jobs at Burger King so I have no idea what my problem is.

Anyway, it was complicated! Some trains stop at some stations and not at others and sometimes, like on weekends, they don’t ever stop at all. And then at midnight the trains go to bed and if you don’t get back to the station before the last train leaves, you turn into a big fat pumpkin waiting to get mugged.

We knew all this and tried to leave ourselves plenty of cushion time between the last party of the night and the last train of the night but things went terribly wrong. In fact, we planned on catching the train before the last train. We’re not that stupid, right?

What we didn’t count on was our inability to catch a cab from the last party back to the hotel in order to catch a train back to our other train before midnight. (I feel like I need to add a sentence about planes trains and automobiles somewhere in here but it really doesn’t fit so I’ll just parenthesize).

We tried to catch a cab for an HOUR. We probably could have just walked all the way home and it would have been easier but we were bumpkins and didn’t know any better. I guess we just weren’t hot enough and didn’t show enough leg or something because cab after cab just blew by us like we were moldy cheese.

When we finally did get a cab and get back to the hotel to retrieve our swag bags, it was too close to midnight for comfort. Not to mention our cell phones were dying and we had no hope of waking up our friends to come up from Redwood City to get us.

Earlier in the night, on our walk to the last party, we had come across a character who jokingly told us he had just mugged a guy for a pair of $300 sunglasses. Why he wanted to brag about his crime to us I’m not sure, but he did. It scared the crap out of me. Was he joking? Was he just trying to scare us? Was he going to pull out a shotgun and demand our purses? I didn’t know. But even worse, just as we turned to duck into the entrance of the party location, he reached out and touched CC’s purse that she had tucked tightly under her shoulder and covered by her pashmina. How did he know she had a purse there? It was creepy.

So while I’m normally pretty tough when I’m waking downtown streets in big cities, I kinda had the heebie jeebies. I didn’t really want to hang out in a train station because we would most likely miss the last train. We had no cell phone to call home (because it died) and no one to come pick us up because they were asleep and couldn’t hear their cell phones that we couldn’t call because our cell phones were dead anyway. Long story short, we decided to take a cab all the way from San Francisco to Redwood City to the tune of eighty big fat dollars.

EIGHTY BUCKS!!! Which is actually a deal because it normally costs $120, but still. I was so bummed. Eighty bucks is not a lot to pay for your safety but it wasn’t something I budgeted for and this trip has been budgeted down to the penny. It sort of ruined my night. But it was safe and we got home and everything was okay.

I’m sorry that is the only thing I have to write about to sum up day one of blogher but our midnight adventure sort of eclipsed our day. I’m sure day two will be much better.