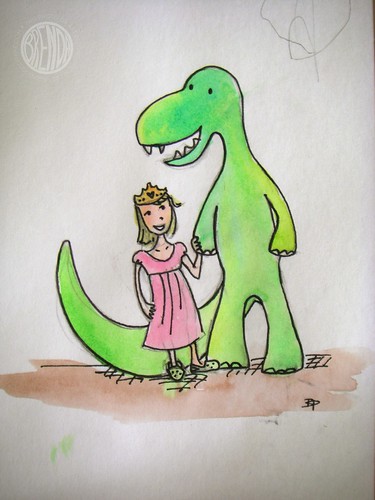 The other day after tumbling class*, Baby Bug and I ambled on over to the playground that is on the same elementary school grounds that our tumbling class gymnasium is on. While we were walking around inspecting the new gear that is different from any of the parks that we usually frequent, Baby Bug started calling me “Dinosaur” for no particular reason.

I used to worry that Baby Bug might grow up with a lack of imagination because I play with her all day long. And when I’m not playing with her, I’m tuning her out with the help of my favorite babysitter: the always-on-ever-present Noggin channel aka television. I worried because I attribute my own active imagination to the fact that I was bored out of my skull most of my childhood and I never had television to occupy me. So will Baby Bug grow up completely dependent on others to amuse herself, I wondered?

The answer is no. Baby Bug’s imagination is alive and well. And guess what? I’m part of it. I’m a dinosaur.

It was kind of funny to be called a dinosaur since I often feel like a big awkward dinosaur when I’m trying to climb up ladders and fit down small skinny playground slides with her. She refuses to go by herself down the slides and often gets stuck at the top with no way to get down so I, being the agreeable mom that I am, often just go up on the playground after her. I figure it’s good exercise.

“What’s wrong, Dinosaur?” she asks in her polite manner.

“No, you’re not Mommy, you’re Dinosaur!” she proclaims.

On and on and on we go like this. I decided I’d play along and start calling her “Princess.” She loved that. I think it’s her new favorite game now. The Dinosaur and The Princess: an on-going series. Off and on all day we fell into character. Sometimes she’d shake off her princess disguise and declare she was just regular Baby Bug again. I don’t mind. I think it’s kind of funny.

I’m thinking it would be super fun to illustrate. I can see sketches where the Dinosaur starts falling out of character and the “Mommy” emerges only to be yelled at by the Princess. I’m not really where I’d like to be as an illustrator. I can see the pictures in my head but I think it would take me weeks just to get one page just right. 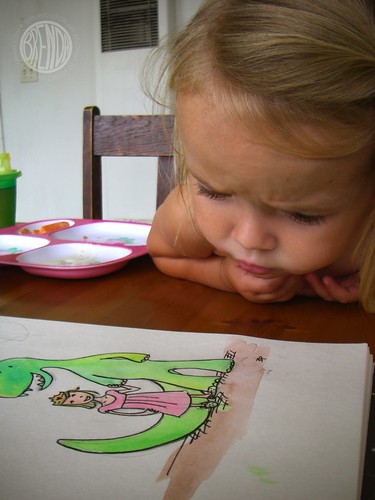 I worked on it a little today. And true to character, “the Princess” yelled at me because I made her dress pink and not green.

Get it right, Dinosaur!

*Yes! We’re taking a tumbling class together! It’s so fun. I’m taking my camera with me next week so I can share.