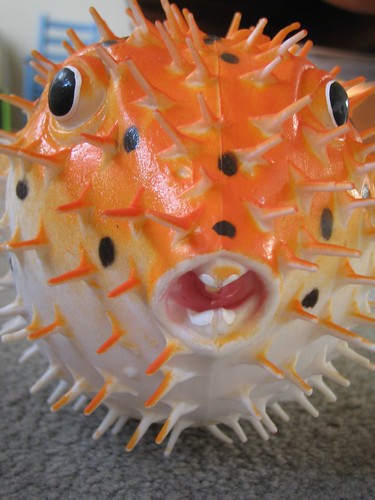 Think of this post as a little vocabulary exercise except instead of vocabulary words I have blog links that I need to use in sentences creatively that won’t bore all the non-linked to death. I’ve asked around and my non-blogher friends have informed me that they are indeed quite bored of all the linking but they will continue to read patiently, as long as I include stories. I will do my best. And then it’s on with our regularly scheduled programming all about Baby Bug.

So guess who I left out of my first linkher post? Angella! Angella of Dutchblitz. Doh. Good thing I linked her in my first blogher post because otherwise I think she might renege on our friendship. I met Angella on the first day of the conference. She was easy to spot with curly hair and a camera as big as her curly-haired head. The thing that was so great about Angella is that it felt like I already knew her. It’s nice to see someone you know when you walk into a room filled with tables of people who have already found somewhere to sit and the only chairs left are odd ones here and there and you have no idea where to sit. She pointed to her table and our seating dilemma was instantly solved.

I also met Kerrianne, who I thought I would recognize but I totally didn’t. Which is sort of weird since I look at her flickr pictures all the time. A lot of people didn’t recognize me either. I did recognize Jen B from Jen and Tonic but we go back a bit. Also, she brought me a present! A cute little tiny leather book with tiny colored pencils. They are so tiny I can hardly hold them. I think they were meant for mice to draw with. I’ll take a photo of it soon. It’s sooooo cute! I might have to draw some tiny mice with my tiny colored pencils.

Speaking of cute and tiny. I do have a funny little story about Lindsay from Suburban Turmoil. Remember in my first blogher post how I wrote that I accidentally snubbed someone in a black and white dress? We figured out that this supposedly snubbed person was Lindsay from Suburban Turmoil except guess what? She wasn’t snubbed at all and she has no idea what I was talking about! Hooray! The whole world does not revolve around me after all.

We worked all this out in Isabel’s hotel suite while we waited for Isabel to come back from McDonald’s with her many boxes of cheeseburgers. I was there early not for the cheeseburgers but because I was bound and determined to meet Isabel finally, even if it meant I had to camp out outside her hotel room door. And so that is where I met Yvonne from joy unexpected , Kimberly from Petroville and The CrockPot Lady! I had never read any of them before but now I will. This is why blogher was bad for me. I had barely enough time to read my thousand blogs that I read as it was!

And yet I have two more names (and possibly more) that I left out on my first post. How could I leave out Sweetney? I actually recognized her dress from a mile away just like she said I would. In my defense, she was standing next to a very cute baby who also stole my attention.

Last but not least I also got to meet Jennie from She Likes Purple. I almost didn’t meet her because she was nowhere to be found! It turns out she was hiding in her room most the time, fighting off the first-trimester tiredness which I totally remember and forgive her for.

And with that I am done. Thank you to everyone.