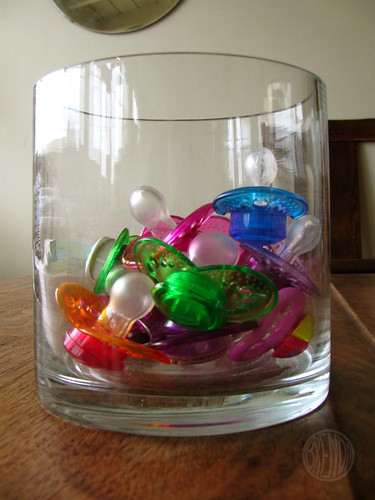 As you know, we have a bit of a “pah” obsession going on in our house. Pahs would be Baby Bug’s affectionate name for a pacifier. We don’t call them binkys or pacies or anything like that. We call them “pahs.”

I think it started back when she was first learning to talk. She probably meant to say pacifier but shortened it to the first syllable like she did to most words back then. Probably because she was teaching me her language as much as I was teaching her mine, we adopted her word for her beloved pacifier and so it has been ever since.

A while back, at Baby Bug’s two-year check up, we had a heart to heart about her pah with her doctor. The doctor said she didn’t really need it anymore. There wasn’t a problem with her having it but she was a big girl now and just didn’t need it. Baby Bug listened solemnly and gave up her pah that very day. Of course she still needed it during nap time and bedtime but no more carrying around three or four and one in her mouth every hour of the day. I though that was great and bragged about her achievement to everyone who would listen.

Then Toby left for two weeks and between missing her Daddy and her molars coming in and me just wanting the whining to stop…she fell off the pah wagon hard. Half a year later, the pahs are as much of a our daily life as they have ever been. I wave my white flag in defeat. We are embracing the pah in our household. She’ll give it up when she’s three, I hope. Or not. Whatever. I could go on and on with this subject but I have other things to blog about. 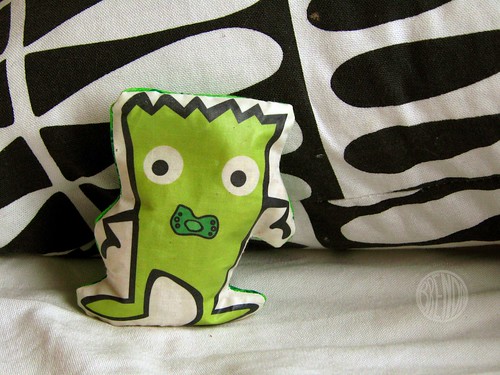 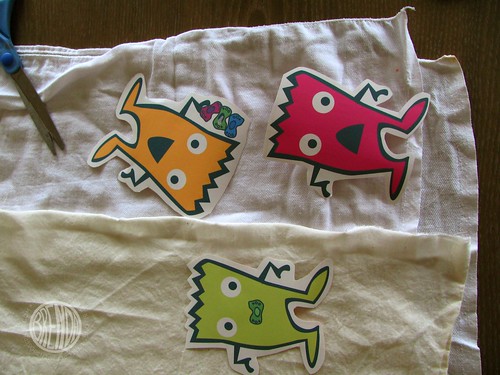 It was one of those days where the hours before bedtime waxed long and I didn’t really want to go to the boring old park AGAIN. I’m so bored of the park.

Sometimes on my way to the park, I squeeze my eyes shut and wish that some kind of amazing toddler-appropriate theme park with rides and trampolines and big blow-up bounce houses would magically appear where the old sandbox and swings and dumb winding-pipe slide is. And while I’m daydreaming maybe there would be slushie stand where you could get tequila in your slushie if you knew the right password or something. Just kidding!

Anyway! The park is boring and I didn’t want to go. It was a cold gray day and I wanted to stay inside because I’m a lazy homebody, I admit it. What I really wanted to do was play on my computer.

So I did what any laptop addict would do in my situation. I cajoled Baby Bug into sitting on my lap and “helping” me play on my computer. This is sort of tricky since she has a very short attention span. Though my adobe illustrator skills are keen, they are not quite fast enough or entertaining enough for her. I had to work fast. With her help in picking out colors and directing where the eyeballs should go, we made some monsters. Then we had to give them pahs. Because anything that is worth anything has to have a pah of course. 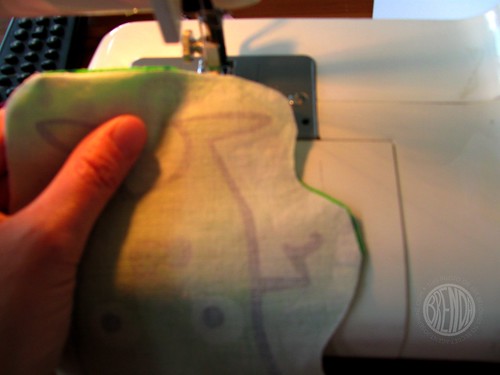 I printed them out onto iron-on transfer paper and ironed them onto some old muslin I had around. Then I sewed them up into little pillows except this time I filled them with rice instead of stuffing. 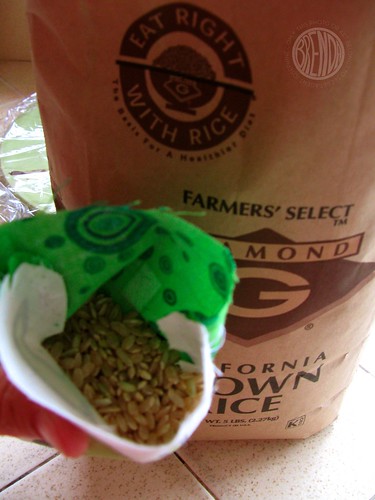 So now they are bean bags! Or rice bags, if you want to get technical. I suppose this means I could nuke them in the microwave and put them on my aching shoulder muscles too but that was not my purpose in creating them. 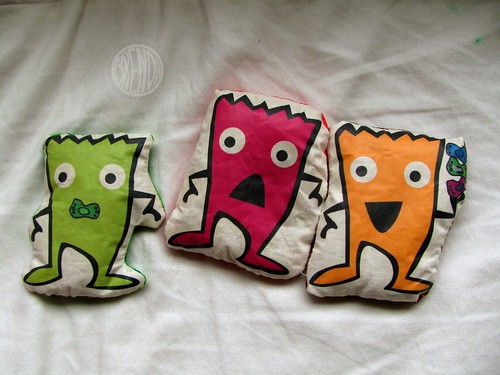 Meet the Pah Monsters. That’s Greenie, Pinky and Yellowie. Pinky is sad because he does not have a pah. Obviously. Baby Bug took to them right away (and why would she not since she helped create them) and has acted out several play-time conversations with them. 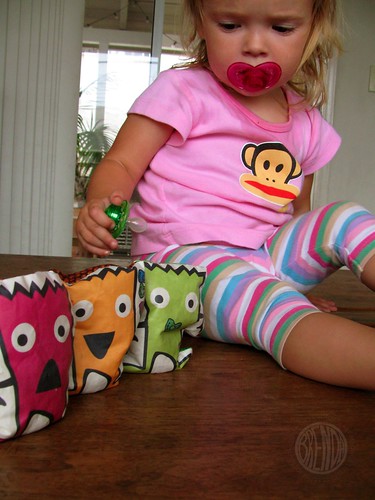 Most of her conversations have Pinkie crying dramatically and Yellowie saying “Nah nah nah, I have all the pahs!” or something like that. I know. What am I encouraging here? Anyway, they are fun and they work pretty well for tossing into holes cut in a box too. 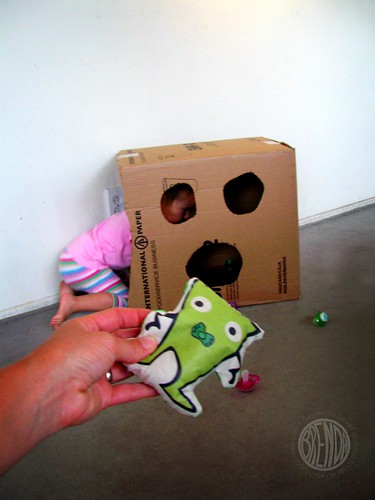 Bean bags are great. I think I’ll be making more of these. 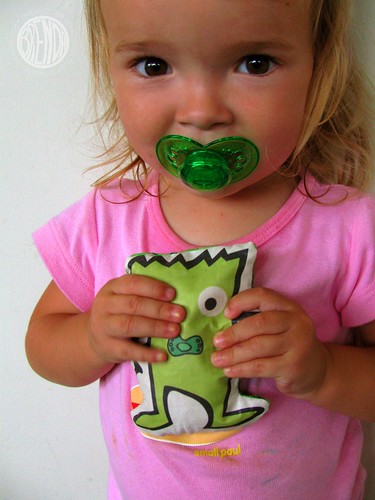