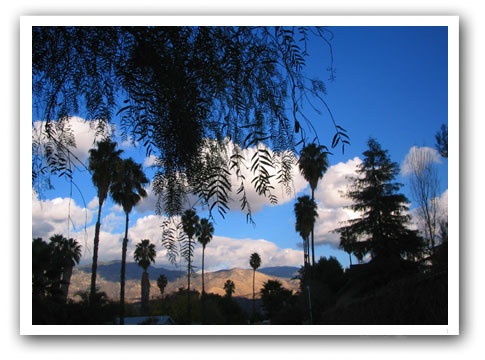 I don’t have any pictures from my trip to the sticks this weekend except this one. Not that the sticks weren’t photogenic, they were. It’s just that it was super freaking cold and I didn’t get up the guts to go outside and photograph all the neato ice crystals and frozen grass blades. I should have. But it was much cozier inside my mom’s house next to the fire. I would have taken pictures inside my mom’s house but it was messier and less photogenic than usual. So all I have is this nifty shot of the clear blue icy sky that I shot one handed upside down (I turned it right side up for you) as I held the baby and opened or closed the gate to my mom’s property as we were on our way to Walmart.

Wallmart! What was I going to Walmart for, you ask. Yeah, I hate Walmart. But I got a bee in my bonnet that it would be fun to have cheapo pictures taken of my nieces and Baby Bug in an old school photo studio. Isn’t it part of life to have those generic portrait shots where the background is some cliche water wheel next to a barn and there’s a pond with some fall leaves dripping in from the corner? Isn’t that part of growing up? I wouldn’t want to deprive Baby Bug of the generic portrait shots even though both her parents are somewhat decent photographers. So that was what we did on Sunday.

It was a good idea…. EXCEPT it’s Christmas and that’s what every woogie in the whole county was doing so they can give their grandparents a 14×22 canvas of their kids in matching outfits as present. There were about fifty families all crammed into the little waiting area playing with the germ infested plastic toys and half of them were gang members. I was scared. I sat across from a guy who looked like he’d just spent the entire night doing speed. His eyes were so bloodshot I thought he was going fall over dead right there in front of me. But what can I say. Everybody has a family and Walmart is as good a place as any to bring them all together.

We waited about two hours for our portrait shot standby appointment. We walked around the store five times and didn’t buy a thing. I’m so proud of myself. I hate shopping at Walmart but I have to admit they have some pretty tempting low priced junk. Like what about a nifty red plastic radio flyer tricycle for Baby Bug?! It even had a little trap door in the back step to store your toys. There were lots of toys I wanted to buy… but I didn’t because I already felt like one more step into the twilight zone might send my whole life into a tailspin of too much stuff and not enough money.

The kids were great. I can’t believe they lasted TWO hours and still managed to smile for the cheeky camera girl. Besides trying to trick us into buying poses on backgrounds we didn’t want, she was pretty good with the kids. SuperChic was the only one who started wiggling off the table and that was quickly solved with a pink feather boa that she got to wear around her neck. I wish I had the photos to post but you’ll have to wait until after Christmas just like us.

Can you believe they still shoot film at Walmart? Yeah. They have two cameras. One filled with film and the other is digital. The digital shots are just “for show” so you can pick which poses you want on their computer screen and get suckered into some kind of $100 package. Those digital pictures automatically disappear as soon as your photo shoot is done. Then you have to wait a week while they send the film to a lab and get it developed. I can’t believe they still do it that way.

It’s probably a good thing since half the digital photos I see these days are such low quality. My niece showed me a picture her mom had taken of her and her sister with Santa at the mall and I couldn’t believe how badly the picture turned out. The girls and Santa were adorable but their skin was blue it was all pixelated like they blew up a thumbnail jpeg from one of those Japaneses sticker-making photobooths and turned it into an 8×10. I could do a better job with my spy cam.

Whatever. I’m not about to reinvent the wheel for Walmart or Santa. I can’t believe what snob I sound like. It is what it is. Technology scheckmology… it is kinda fun to do things old school once in a while.