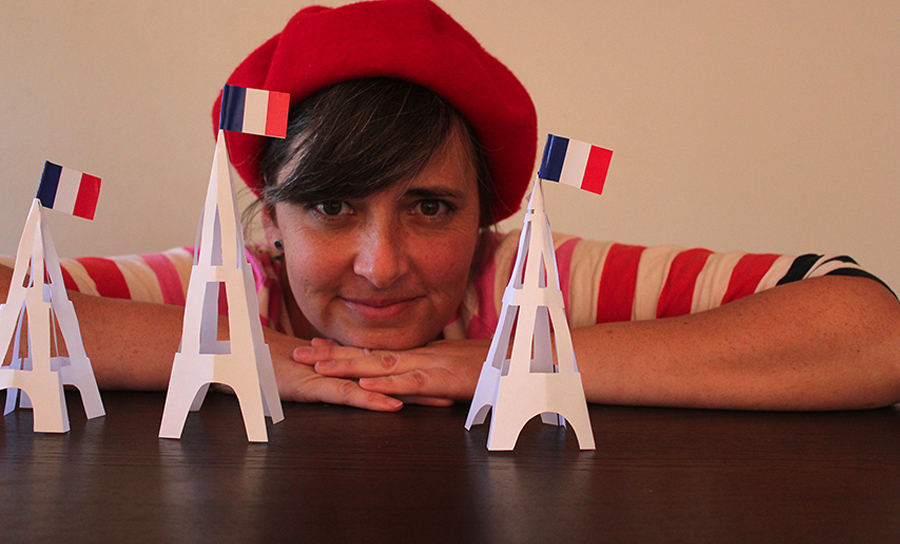 You know what you need to make right this very minute? A tiny paper Eiffel Tower!

No way, you say?
Yes, way.
Totally way.
It’s as easy as making a snowflake. I promise.

All you need to do is print out my handy Eiffel Tower Snowflake and then watch this movie:

Click here because my blog is lame and cannot embed video for some reason. 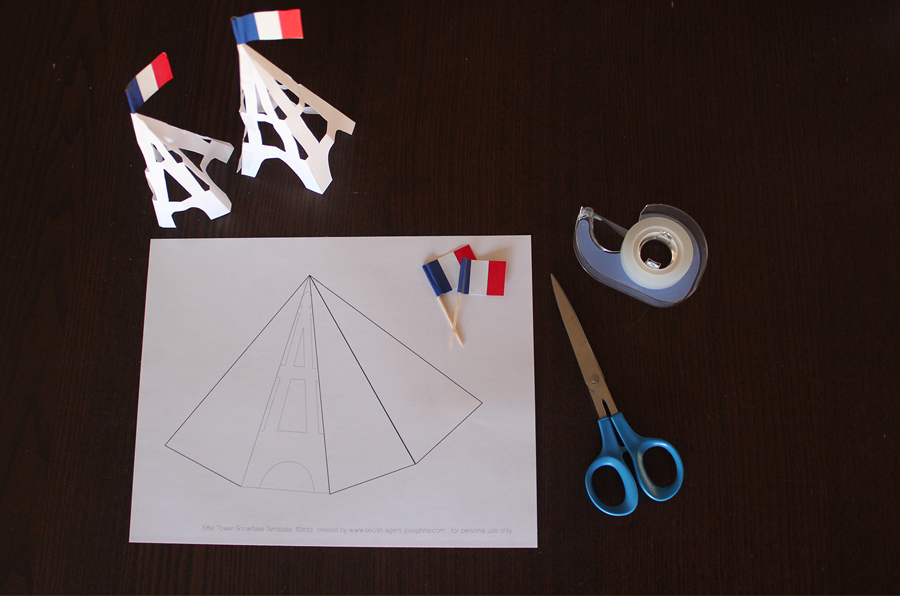 Actually, you don’t have to watch the movie at all. It’s a pretty self-explanatory template to those who are paperically (that’s a word, right?) inclined. Just fold on the dark lines and cut on the light ones. Well, maybe there’s more to it than that but you can figure it out. You’re brilliant!

The movie is very poorly produced so feel free to save six minutes of life. But then again if you want to know how much of a dork I really am, rambling on about kids and exacto knives, then please, be my guest! Pop some pop corn and turn up the volume. I have a mouse voice.

I’ll also be making these and some triangle boxes (woo whoo!) tomorrow night (7pm!) at Mesa Verde Library. Hope to see at least one of you there! 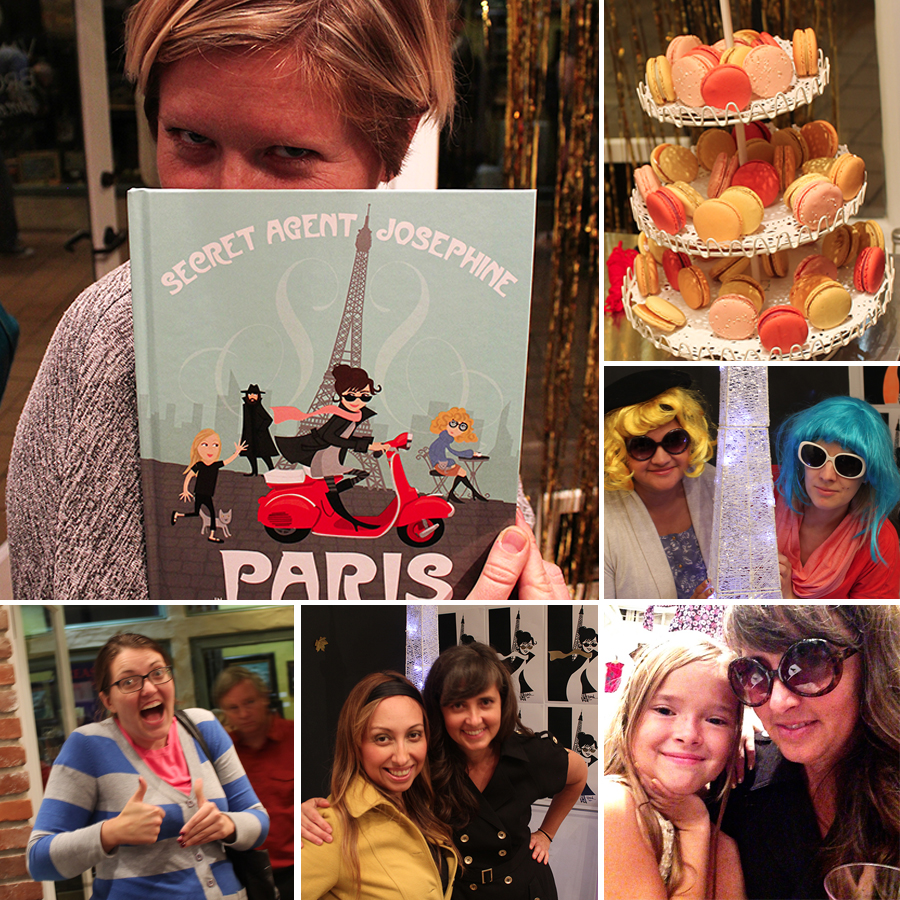 You guys! It happened. The launch party was everything I hoped it would be. We had so much fun.  I feel like this book is really off to a great start. It’s already sold out on Amazon, can you believe it?!!  I’ve heard they will have more in stock on Monday, thankfully. It’s still available on Barnes and Noble though and you can always walk into your favorite bookstore and special request it. In fact, that’s an excellent idea! No pressure, of course. :)

I keep going over and over in my mind all the little things that went right. Everything! Usually there is some big hiccup when I throw a party but this one went together pretty well. I have so many people to thank.

This book was a real struggle, as you know. It’s had a lot of ups and downs. So many people have been there along the way to help it along.  To see it finally finished and accepted is a huge relief. I feel so blessed. 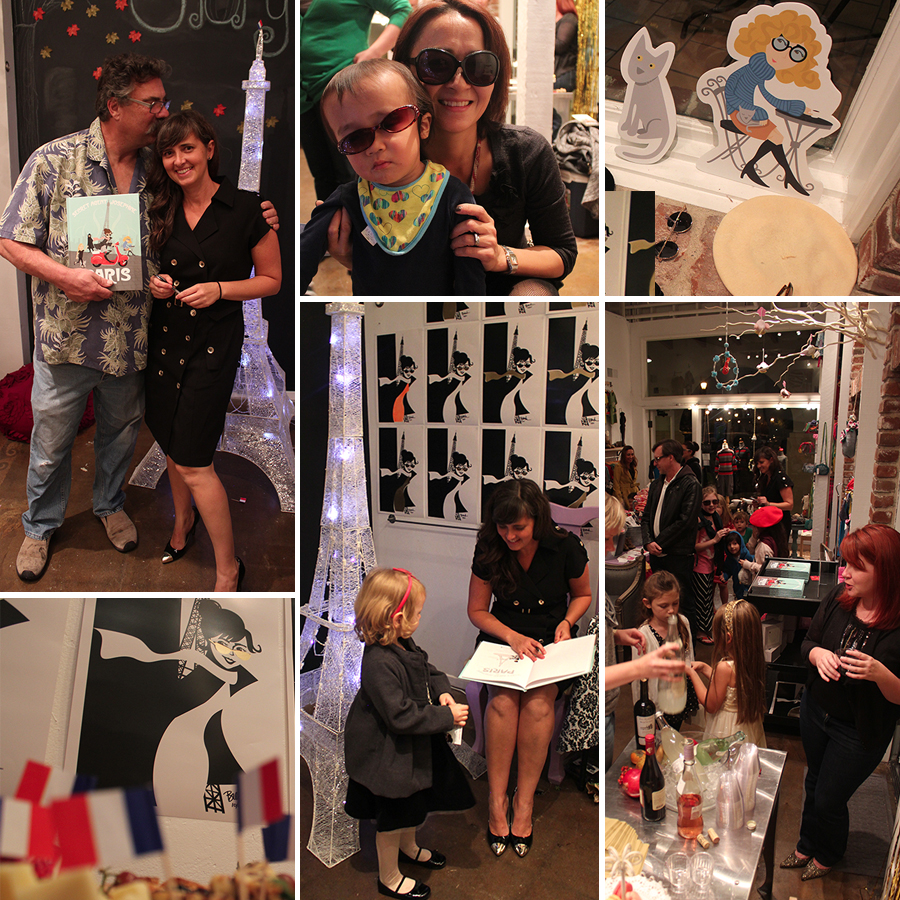 Mostly I need to thank God because way back when I was living in the sticks and things looked pretty bleak, I prayed and prayed that I could dig myself out and (…I don’t mean to get all religious or anything but) I really felt like God said, Finish Secret Agent Josephine in Paris and you will be okay. Of course this could all be in my brain and probably some of you will be thinking I might be smoking crack but I have felt from the beginning that this book was a gift from God.  I’m not going to become a famous author or anything but this book is going to pay the bills or at least it has put me on a path that can help me pay the bills and that is a REAL answer to prayer. Just like God takes care of the sparrows, he takes care of me. Not always the way I think I should be taken care of but I’m well taken care of, none-the-less. 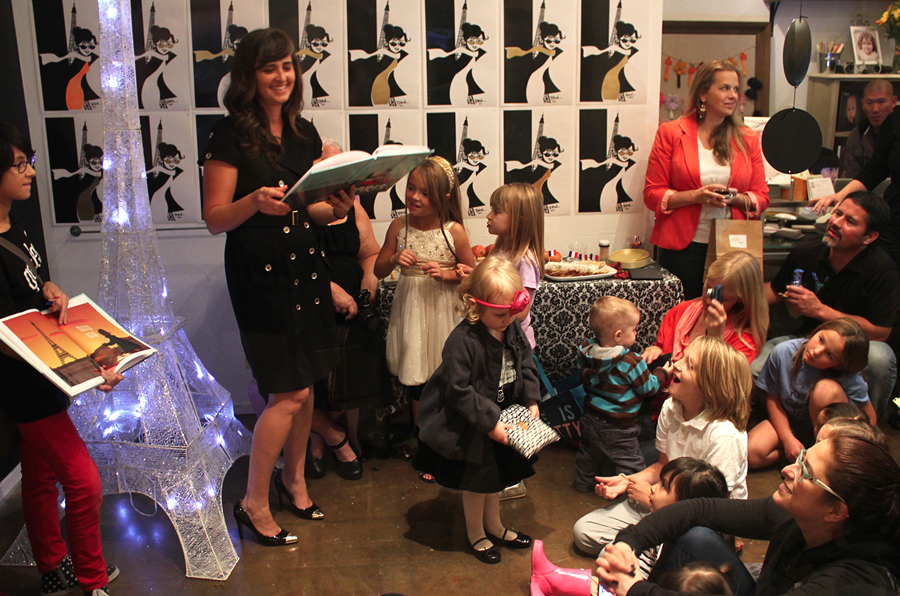 The reading went pretty well. I was so nervous that my voice wouldn’t be loud enough or I’d stumble over something. I had help from the audience to pronounce the French parts, which was really really fun. 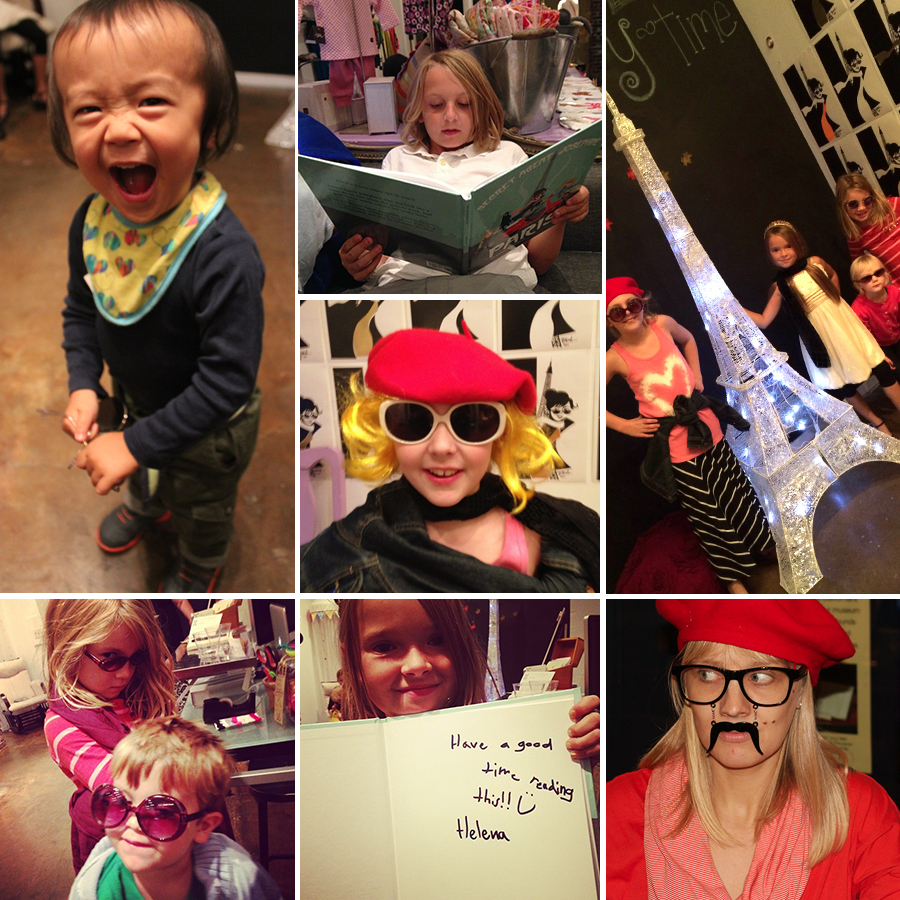 I think everyone had a lot of fun. I know I did. I think the kids really did too which was super sweet.  It wasn’t supposed to be a “kids party” per se but my books are for kids after all and it’s not like I’m going to say, Sorry, kids you have to stay home. It was tricky because the venue was a darling children’s clothing boutique and photo studio in San Juan Capistrano called Little Mud Nest . They have beautiful designer clothing and knick-knacks set up all over. I was so worried that the kids would spill sparkling lemonade on the handmade onesies or rub raspberry macaron filling on the hand-knitted cashmere owls. I was so busy talking and thanking everyone for coming but I constantly had one eyeball on the kids who might wreck havoc on the store merchandise.

Enter Sean Slippy! The solution to all my worries! 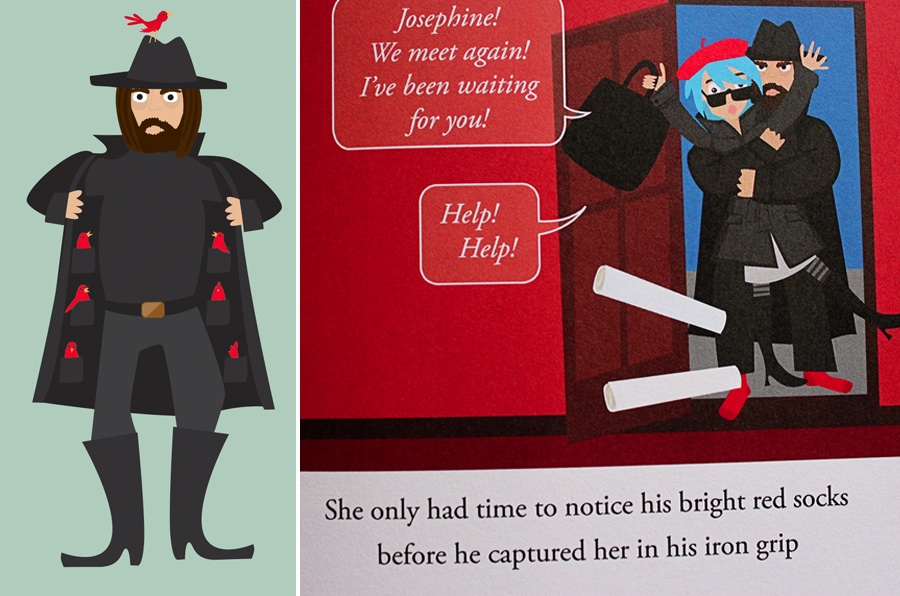 It’s funny how sometimes the things you do last minute, on a whim, save the day.  My brother is in town just for the party. The plan was to have him lurk about because he is the villain in the story. But then right before the party I made up four little tiny manilla folders with mission instructions inside to find the bad guy. I handed them out to a few ring-leaders at the party with a small skein of  red yarn (which is also in the story). 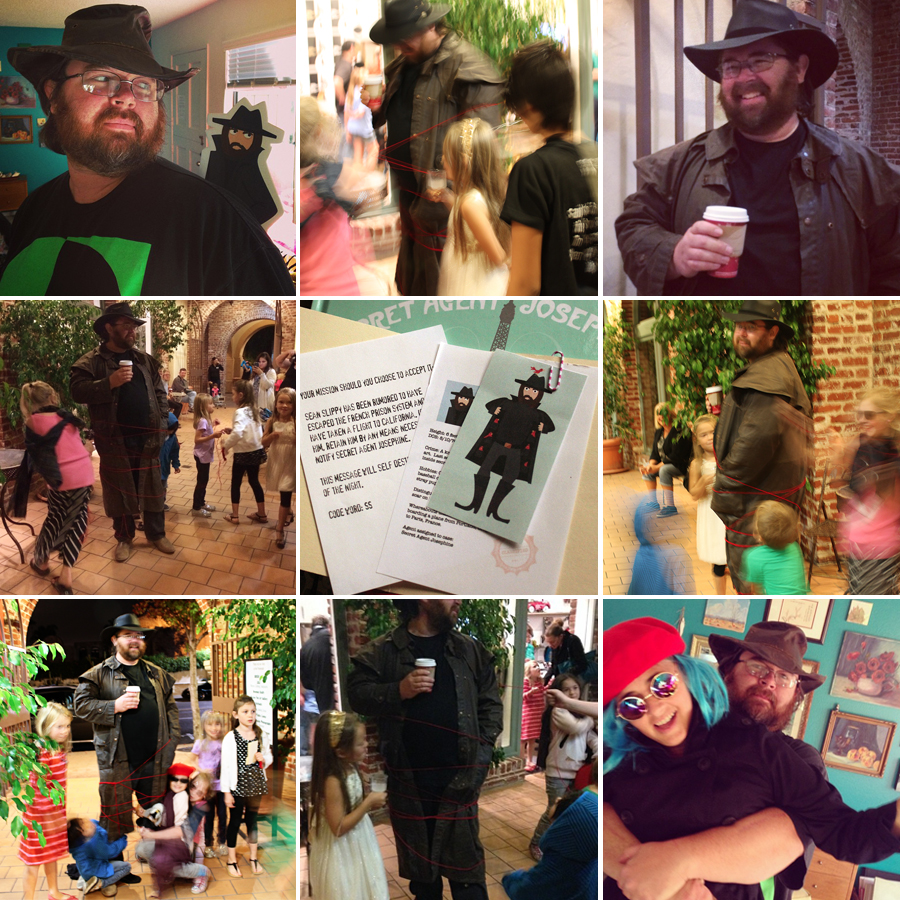 At first the kids were bewildered. They had to find the bad guy and all they had to work with was red yarn? Not to mention, my brother is a six-foot, 280-pound, scary-looking guy. The kids rushed outside to the court yard and spent the next half hour trying to get up enough guts to approach him. It was great. He lurked, they followed.  It kept them out of the store and provided some lively entertainment. Have I mentioned that my brother is great sport? He is. He’s a big teddy bear of a guy but when he doesn’t smile he can look pretty intimidating.

Of course they caught him in the end and wrapped him in red yarn. He said a few of the kids got pretty aggressive and hit him on the head a lot but I think he can take it. I’ll call it payback for all the times he held me in a headlock when we were kids. 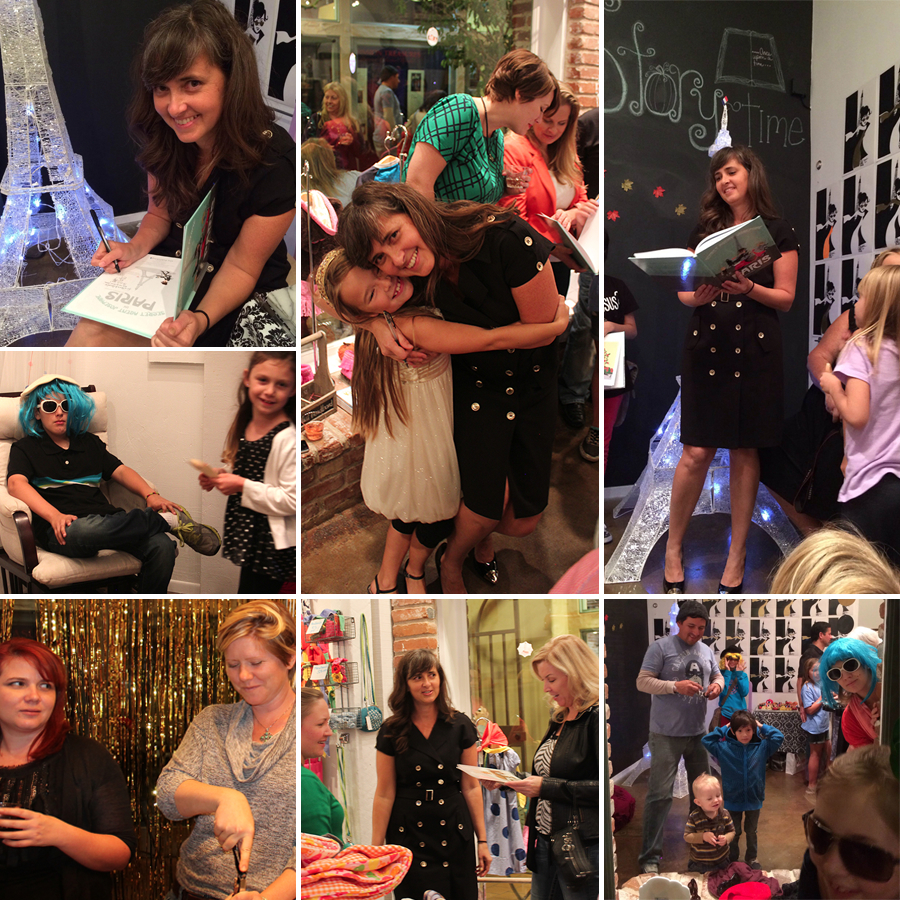 So the rest was all book readings and poster handing out, lots of talking and sipping wine, munching on macarons and catching up with old friends…trying on costumes and taking pictures in front of the giant Eiffel Tower. 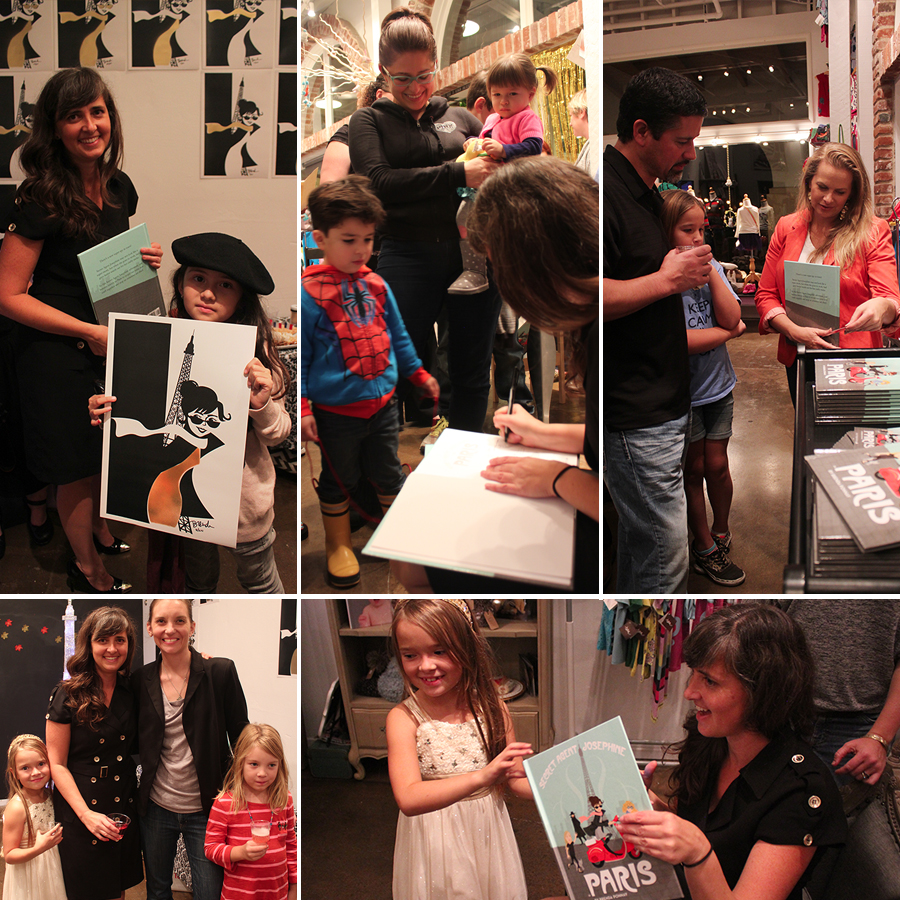 Isn’t the Eiffel Tower awesome? My good friend, and fairy godmother, Susan LaPorta sent that because she couldn’t make it to the party. How sweet is that? I have the sweetest friends and family.  I can’t thank my family enough. 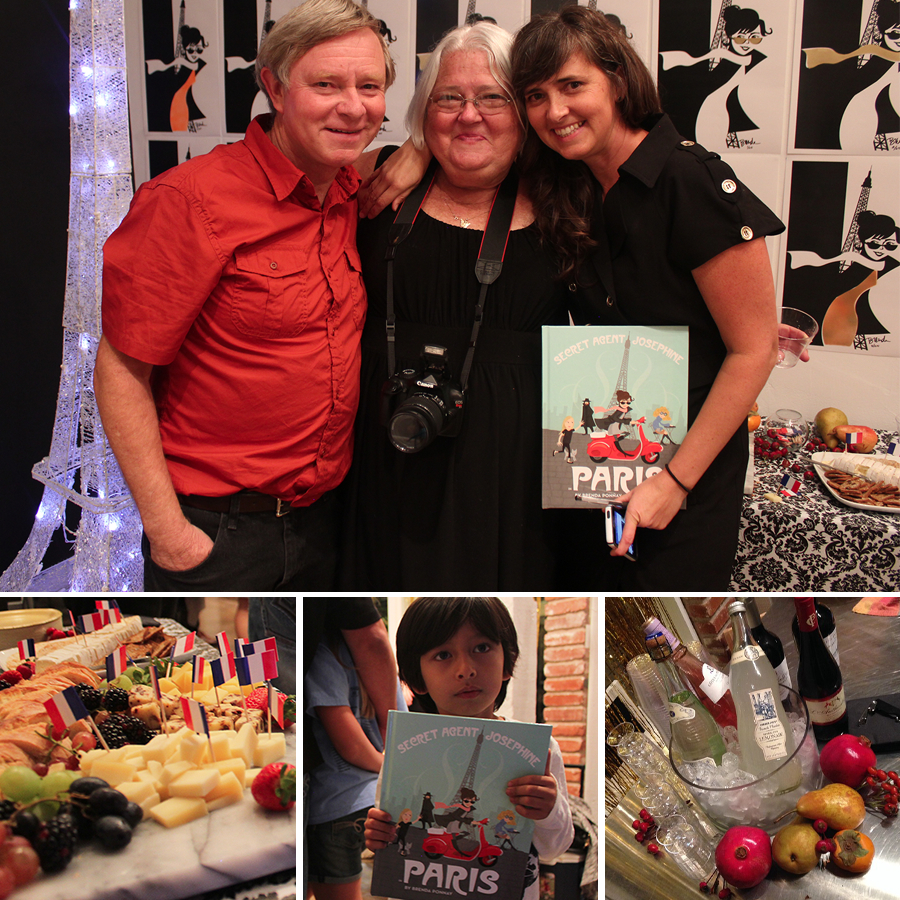 They’ve put up with my craziness for a long long time and they’ve always believed in me with more enthusiasm than I deserve.

One sad thing about the book is that I used up all my allotted pages writing the story and because of the publishing deal I have, I wasn’t allowed any more pages to write my thank you’s. A bit ironic but the story couldn’t be shortened!  I did write a dedication in the front to my blog readers (you guys!) but I really need to write a post thanking everyone who helped me. So here goes: