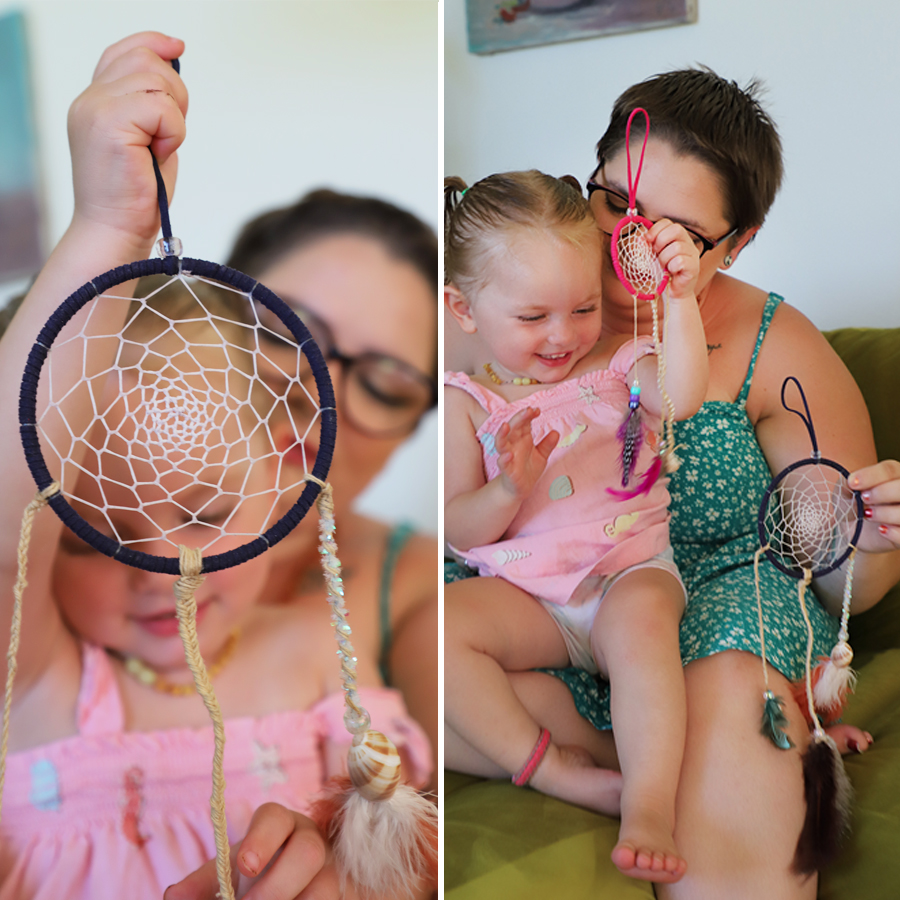 I love the words: dream catcher. Not “dreamcatcher” as in a hoop with a net that catches dreams and protects children in their beds, though I love those too, but just the words dream and catcher. I think of it as a person who catches dreams. We should all be dream catchers, no? I love nothing more than to dream up something big and then go and catch it! It rarely happens but when it does, it’s magical. I’ve been lucky to catch quite a few dreams in my life.  So when Amber (aka Rapunzel) started making them at my house to kill time and maybe start a little cottage business it felt a bit provident.

A little back story: Amber has been staying at my apartment for a few weeks. This is because she and her husband have been struggling to find a place to live. For years they’ve hopped between couch surfing to living in their car to finally living in a low-income hotel. It wasn’t the best. Life has been very hard for Amber. They left that hotel this last year because it became an unsafe place to raise a child. They planned to live with my mom (who needed help) until Casey, Amber’s husband, found work and they could afford a place of their own but it didn’t pan out. They got kicked out by my parent’s HOA and found themselves bouncing around from family member to family member. Finally, they just gave up on California. Everything is just too expensive here. It’s impossible to find a job that will pay for an apartment unless you have two incomes and a couple of side hustles. Believe me, I’m doing it too and it is killing me.

Casey decided to try Iowa where his mom lives. He could live with her while he looked for work, so he left his wife and baby behind and set off for Iowa by bus. His luggage got stolen but he made it and found a job working the night shift at a gas station. He saved every penny and hoped to soon find an affordable apartment for his family. Well, you can guess what happened next. Apartment after apartment got taken before he could even get on a waiting list. It’s been six months and nothing has worked out.

Times are tough for everyone but it was breaking my heart to listen to their phone calls every day. Casey was getting more and more depressed. I was desperately trying to think of ways for Amber to raise money while caring for her high-maintenance toddler. I pulled out my craft supplies and told her she could make anything she wanted. I’ve been wanting to downsize anyway.

I closed my door so I could work and when I came out four hours later I found Amber tying string together to create a beautiful macromé hanging on my window. What can I say, craftiness runs in the family! I was so impressed I asked what else she could make and when she mentioned dreamcatchers I decided to order the supplies and see what she could do. 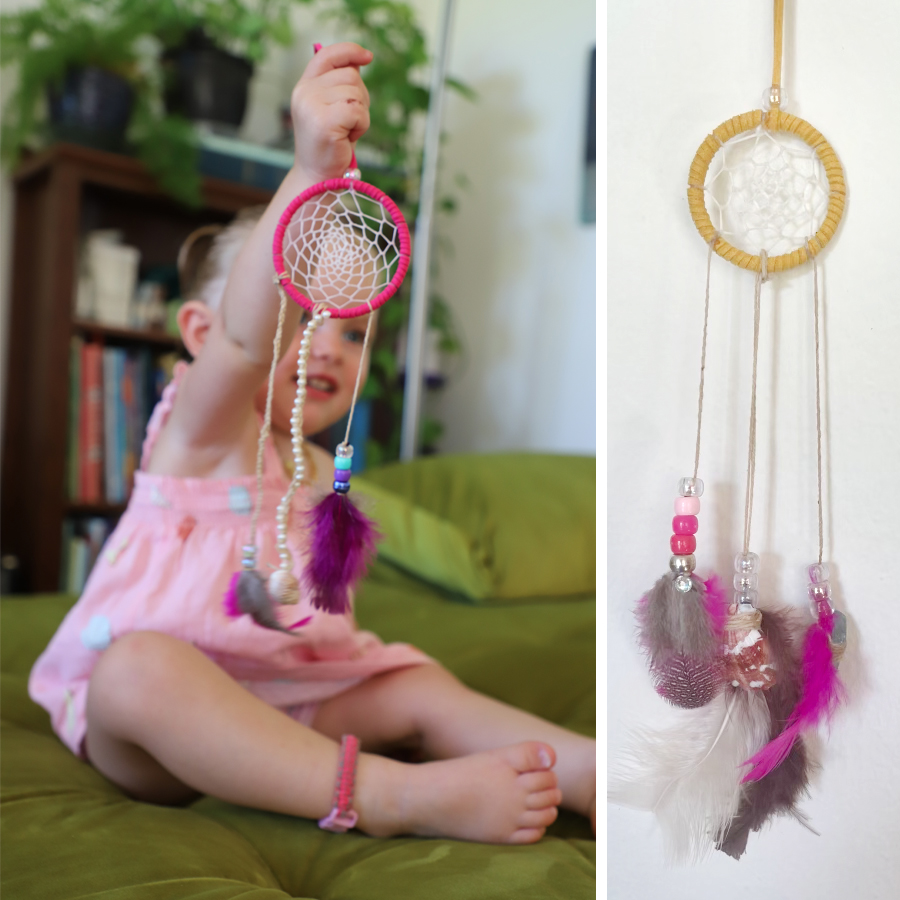 During naptimes and when Bean is swimming and playing with me, Amber has been steadily creating dreamcatchers. They are beautiful! I told her we could put them in my Etsy shop and sell them. I haven’t set up any shop listings yet but if you are interested, email me and I will get on that. I know dreamcatchers are not going to pay the rent but every little bit helps and Amber can’t really do much else these days with a very active toddler. Not to mention she suffers from Elos Danos, Fibro Myalgia, and Pots… I don’t know much about these diseases but I have seen firsthand that they cause a lot of pain and probably every fourth day or so she struggles to even get out of bed. But she does. You have to when you have a child. 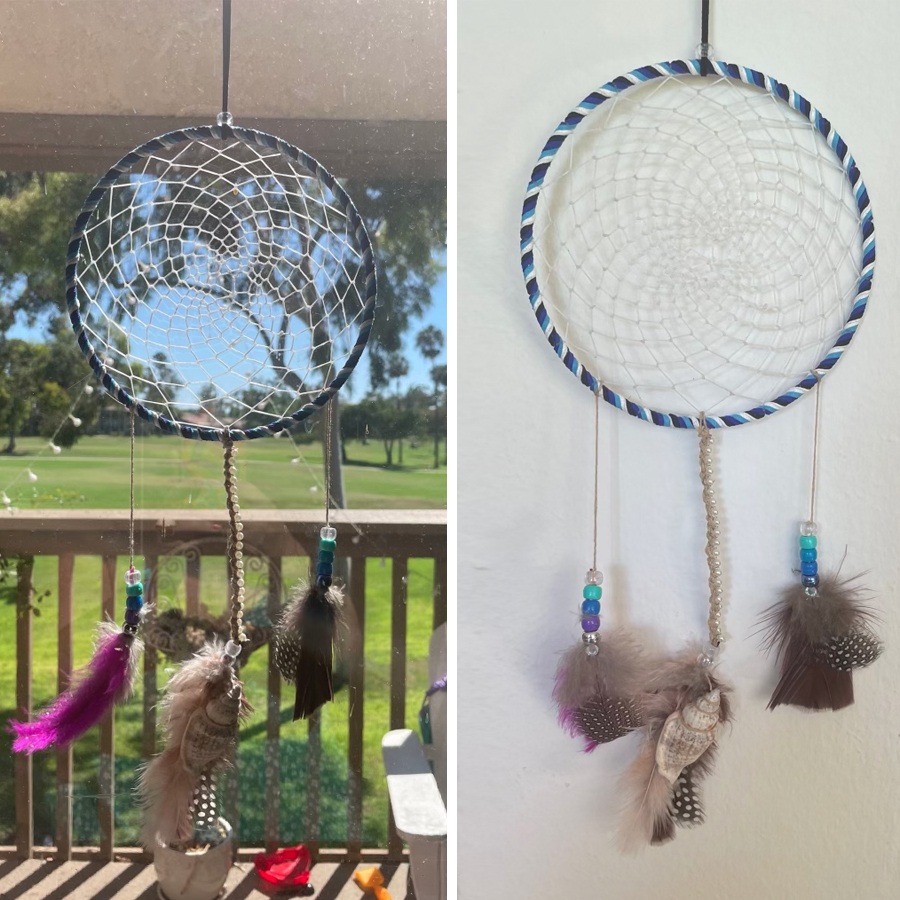 Both Amber and I were determined to keep our spirits up. Something had to give. Her husband was getting more and more depressed. Daily phone calls were ending in tears. What could we do? We lit candles and prayed. I talked to everyone I knew, hoping someone would know something or someone who could help. 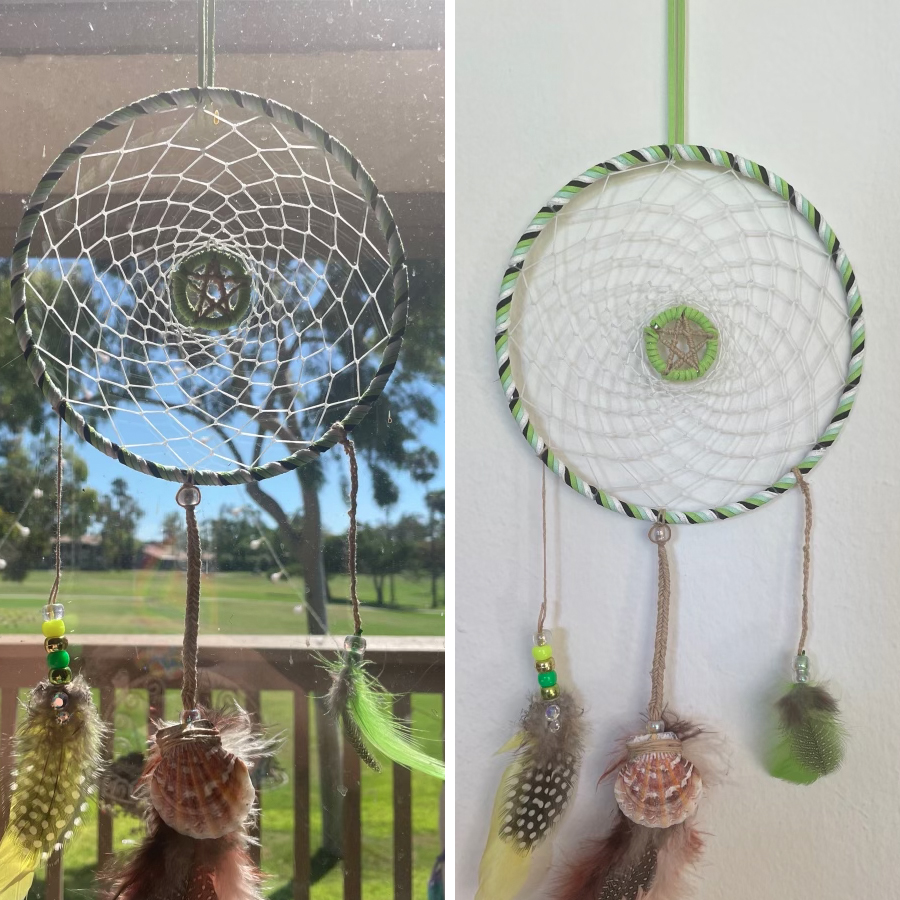 Then out of the blue, an anonymous doner gave them two thousand dollars. It came from a completely unexpected source that I can’t share. Somewhere I wouldn’t have thought of in a thousand years. But here we are. Two thousand dollars to put down on a place! In Iowa that goes a long way.

Casey wasn’t able to find them an apartment but he did one better. He found them a mobile home they can BUY. Can you believe it? They’ve been homeless for years and finally, they’d be back on the grid and living in their first real home! It was an answer to prayers. They put the 2K down and will make reasonable payments on the rest as well as rent for the ground it sits on.  It’s a real home with two rooms, a kitchen, a laundry room, and even a mud room. They are over the moon. After so many years of hardship, things are starting to look a little bit brighter.

I should say that going from homeless to living in your own place is not without its difficulties. In fact, every step of the way has been incredibly frustrating. I had the money sent to me and then I had to send it to Casey via money order and it got flagged as probable fraud. When you are down and out keeping a bank account open is a luxury. I spent hours on the phone trying to convince the security team that I was in fact a real person trying to send money to my nephew in law and he was not asking for me to do anything illegal. It’s really hard to get back on the grid.  Really hard. 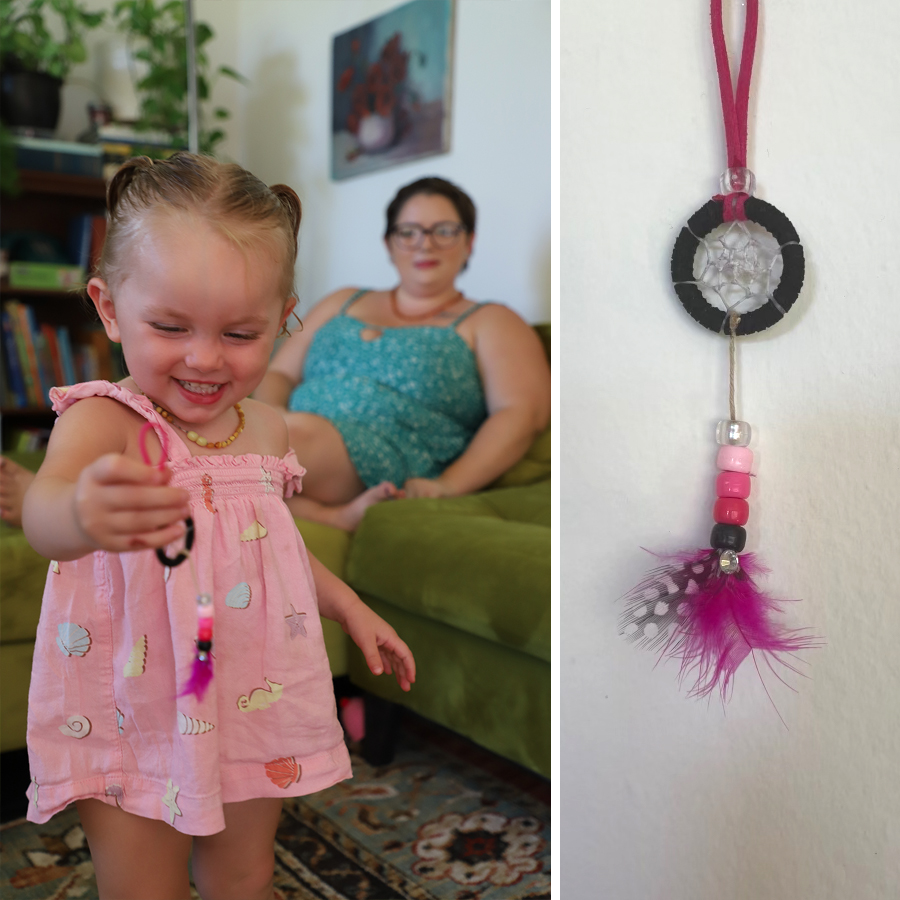 But they did! They’ve been living in my living room, and sleeping on my couch for weeks now but at the end of this week, they will begin their journey back east to live in their own home. 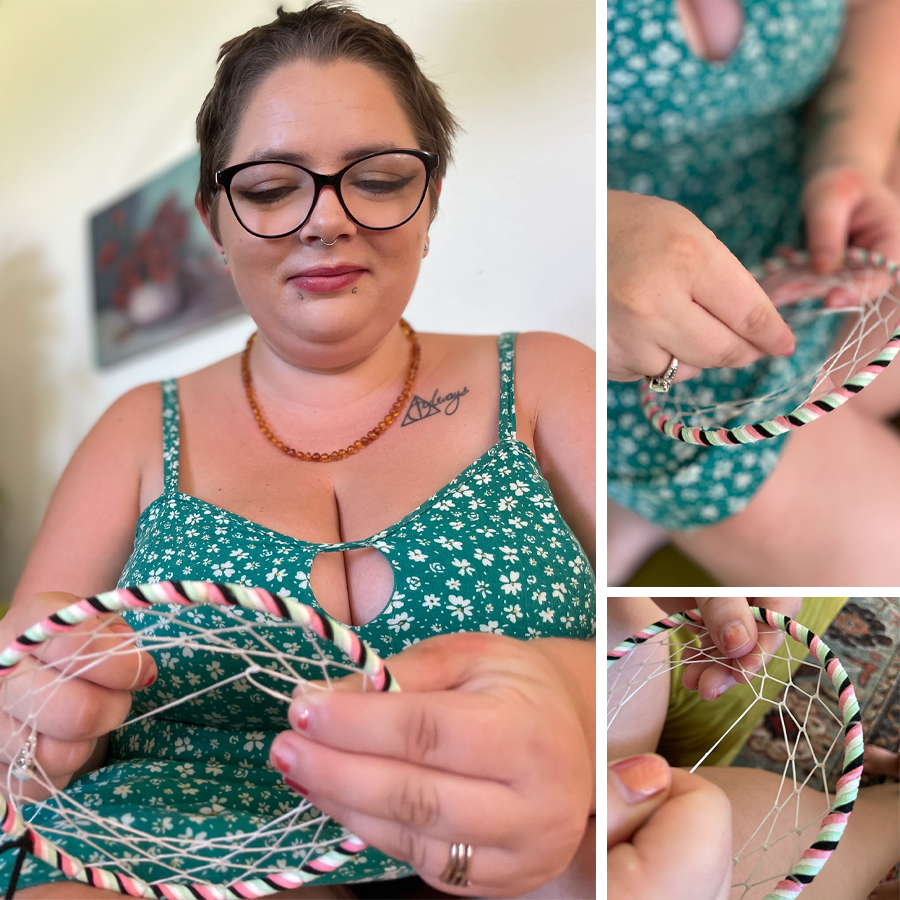 It’s amazing. It’s a dream, caught! I didn’t think it could happen. I’ve wanted to help Amber for so long and I’ve struggled to find ways to make a real difference. Sometimes I just felt like I was throwing money in the water because nothing could really get them off the streets and living a better life. Every step they took was one step forward and two steps backward. Being poor is exponentially expensive. 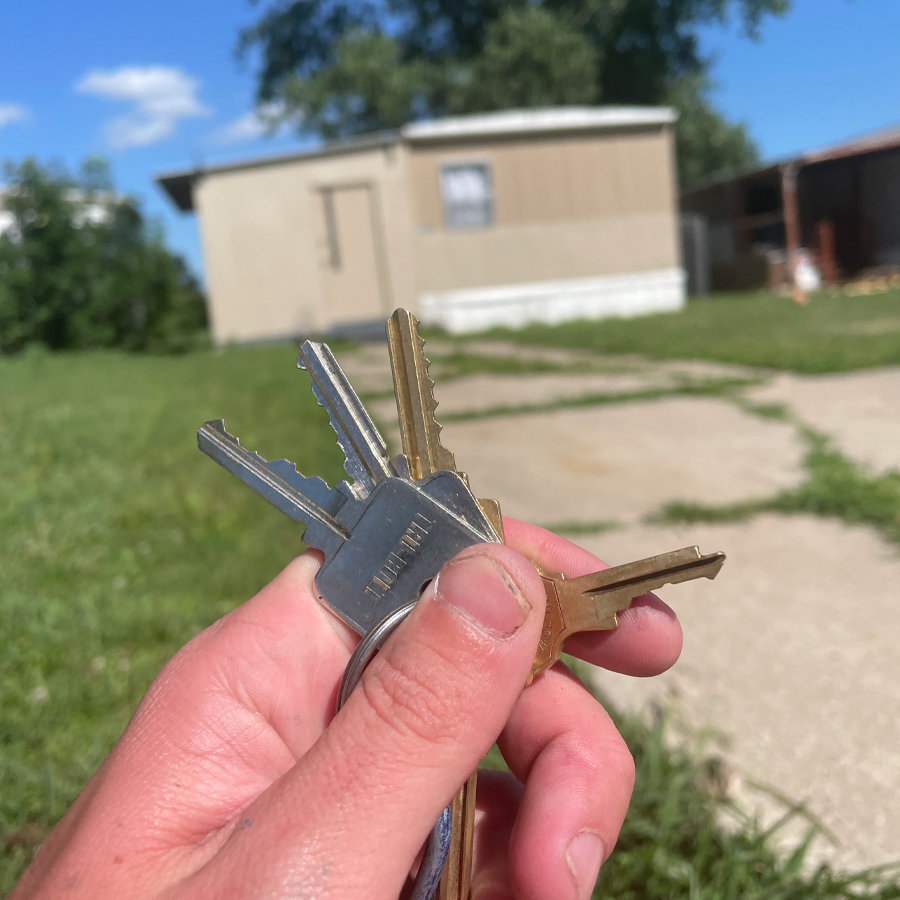 But here we are: They have keys and a real home.

Do you need a dream catcher too? Maybe it will work magic for you too.  Hit us up. Amber is selling them for twenty-five bucks and under. If you’d like a custom order she can do that! 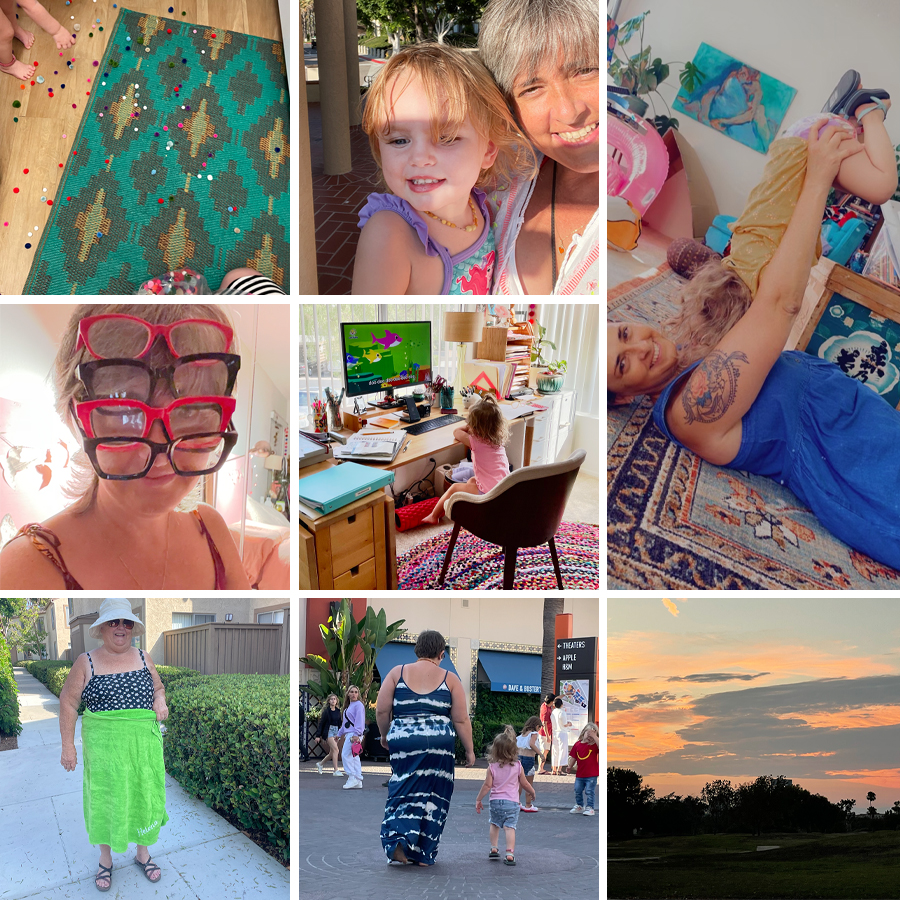 I’ve been thinking a lot about how I used to whine about wanting more kids. I was so sad when I went through menopause and the role of motherhood seemed to be ripped out of my identity long before I was ready. Time is ruthless that way.

Queue five years later: A two-year-old moves in and it alllllll comes back to me.

I don’t want more kids! Sixteen-year-olds are a breeze compared to toddlers. I totally forgot what it was like to have a bin of colored pencils dumped on the floor every time they want to color. I forgot about keeping breakable things above four feet. I forgot about cleaning soggy cheerios and mushed banana bread from between the spokes of my dining room chair.  I forgot how much water I used cleaning up messy faces and messy hands and messy bellies and messy high chairs… I bet my water bill has doubled. And then there’s the skipping naptime and all-out war when it comes to bedtime. I totally forgot about that.

Don’t get me wrong. I am loving having my niece stay with me for an extended period of time. I just need to get my mommy-grove back on. 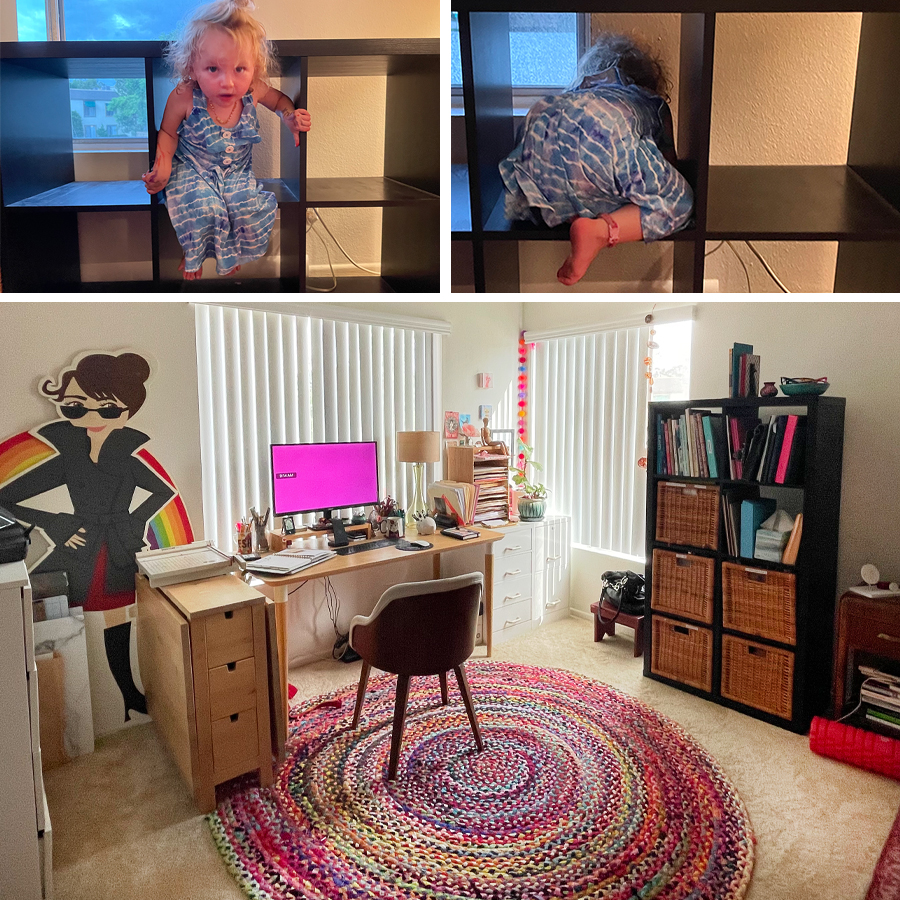 In other news, I rearranged my office and I’m getting used to my new hair. I like it. I think I might keep it.