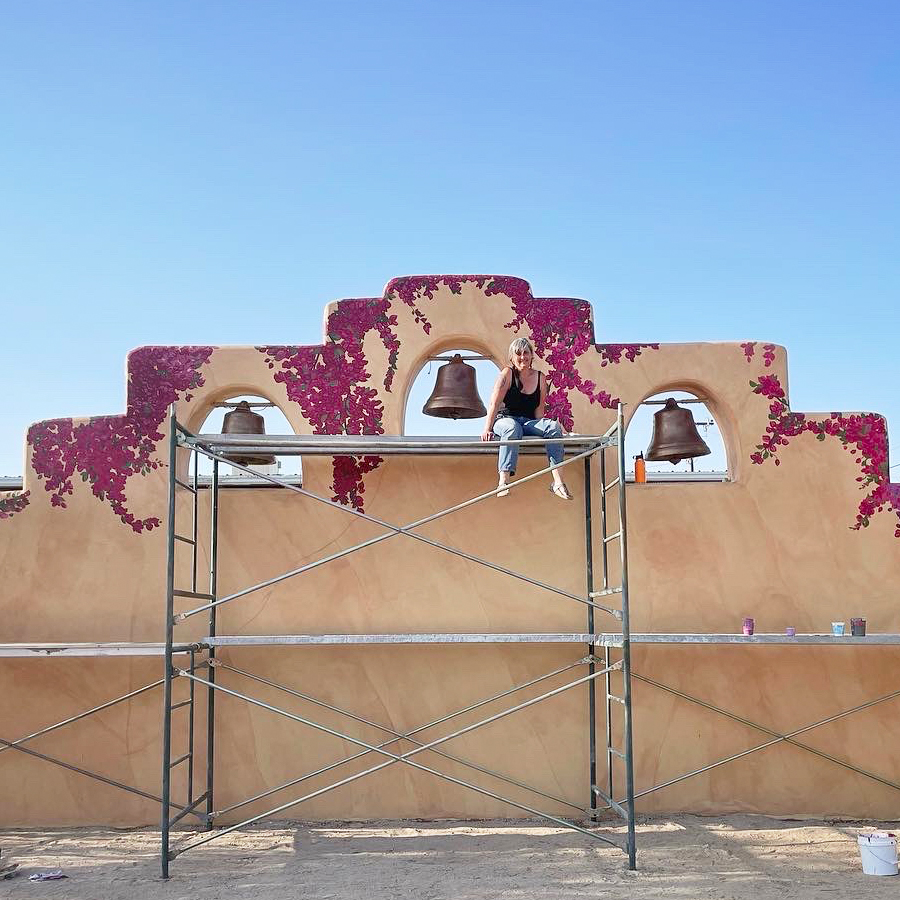 I swear I’m going to get back into daily blogging one of these days. To be honest I’ve been a bit down lately and found myself self-soothing with food and sleep (never a good sign) so I time-blocked my entire week with a small chunk especially blocked out for blogging. So far I only have a time slot set for once a week but if I’m good at this time-blocking business, and don’t rebel against myself like I usually do, I’ll up it to more time. It’s a hard time for me. I knew it would be but here I am sludging through.

Let’s talk about the mural! The mural was a good time! I was super worried and self-critical all the way through but once it was done and everyone told me it was beautiful I started to believe them. I’m mostly happy because it was outside my comfort zone and I did it! I conquered that wall.

I think I already said this in the last blog post but that primer was a big mistake. It was so much work to cover it all. What was I thinking???   In a way it worked out because the client wanted full bushes of bougainvillea and I probably would have made it a bit more branchy and less bushy. So I think the primer forced me to really cover the space. I still want to go back and add more highlights and the little yellow centers to the flowers but the scaffolding had to go back so I ran out of time. 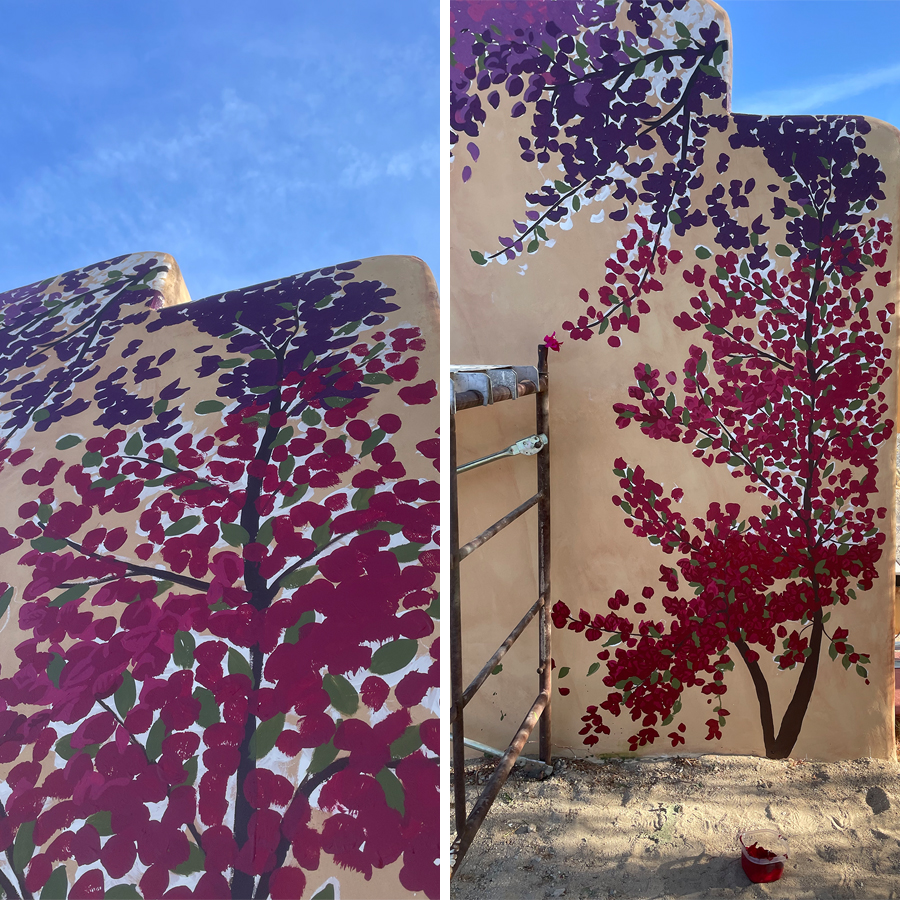 I’m actually really surprised I finished it on time. It was a bear of a job. Working in that heat, climbing around on scaffolding like I wasn’t afraid of heights. 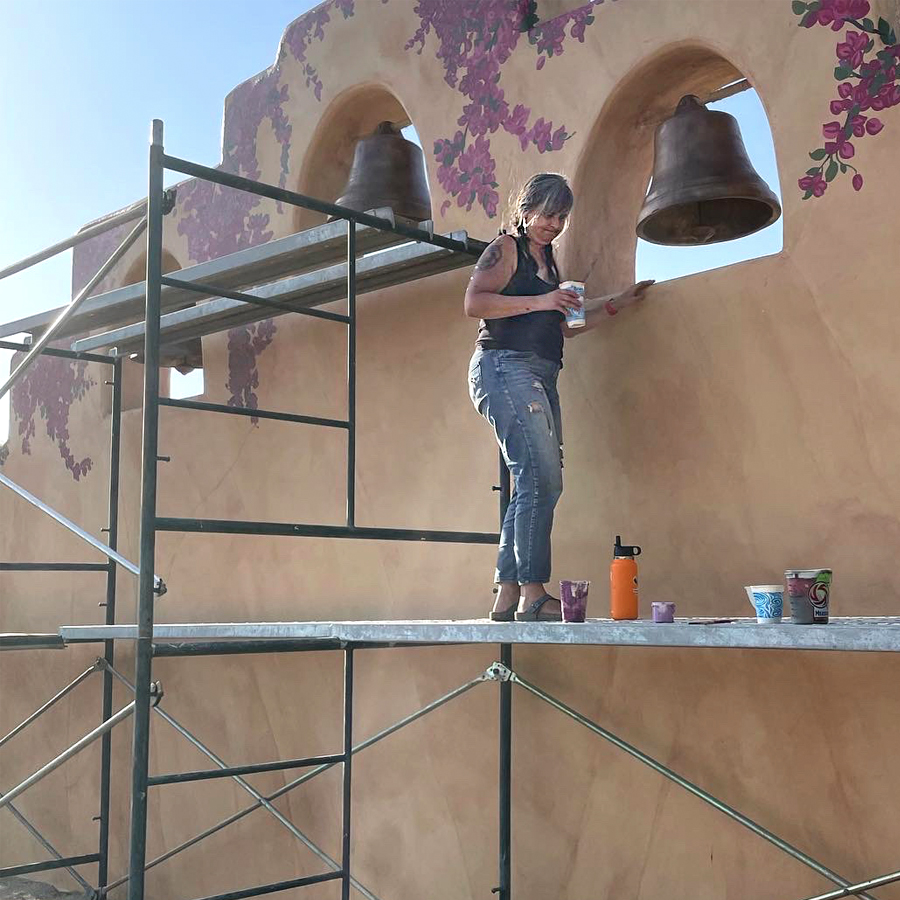 I’m totally afraid of heights! But I figured out a way to overcome my fear: concentrate on painting! When I needed to reach a spot up high to finish detail on a petal just out of reach, I just stretched out my arm into mid air and didn’t think about how precarious I was. I even walked on the top scaffolding without holding on at some points. 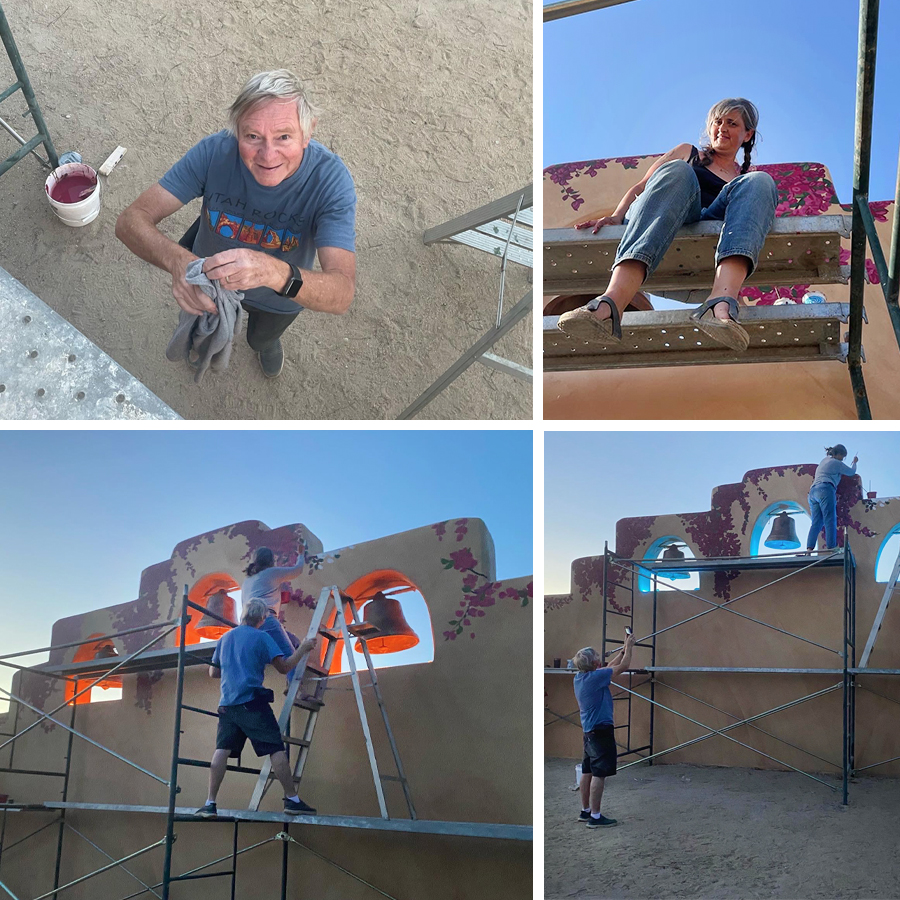 My dad was SO SWEET. He was so worried about me falling off the scaffolding that he drove himself out to help me every day on his own dime (which is not cheap lately with gas prices soaring). I paid him to bring and take away the scaffolding (he’s a total lifesaver) but he still wanted to come every day even when I didn’t need him. Turns out I kinda did need him because the top scaffolding didn’t reach all the way across so we put a ladder up on top of the scaffolding so I reach the really far bits. It was scary but knowing my dad had my back, literally, kept me going. I know how blessed I am to have a dad like this. I don’t know what I would do without him. When I think about him passing it tears me up every time. Why do parents have to get old?? 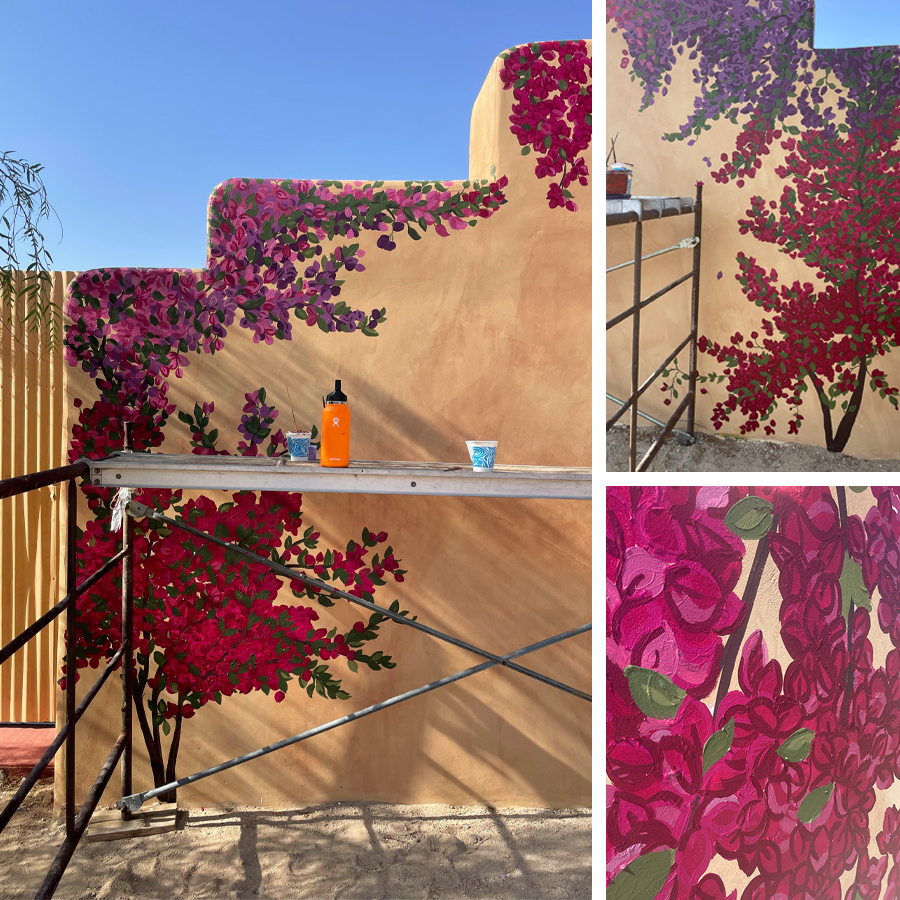 Bit by bit we got it done. Bug wasn’t so much of a help this second trip out but I was glad for her company anyway. I had my tunes playing, she was laying out getting a tan…it was nice. I think I worked from 6am to 8pm straight, only stopping for water breaks and food. 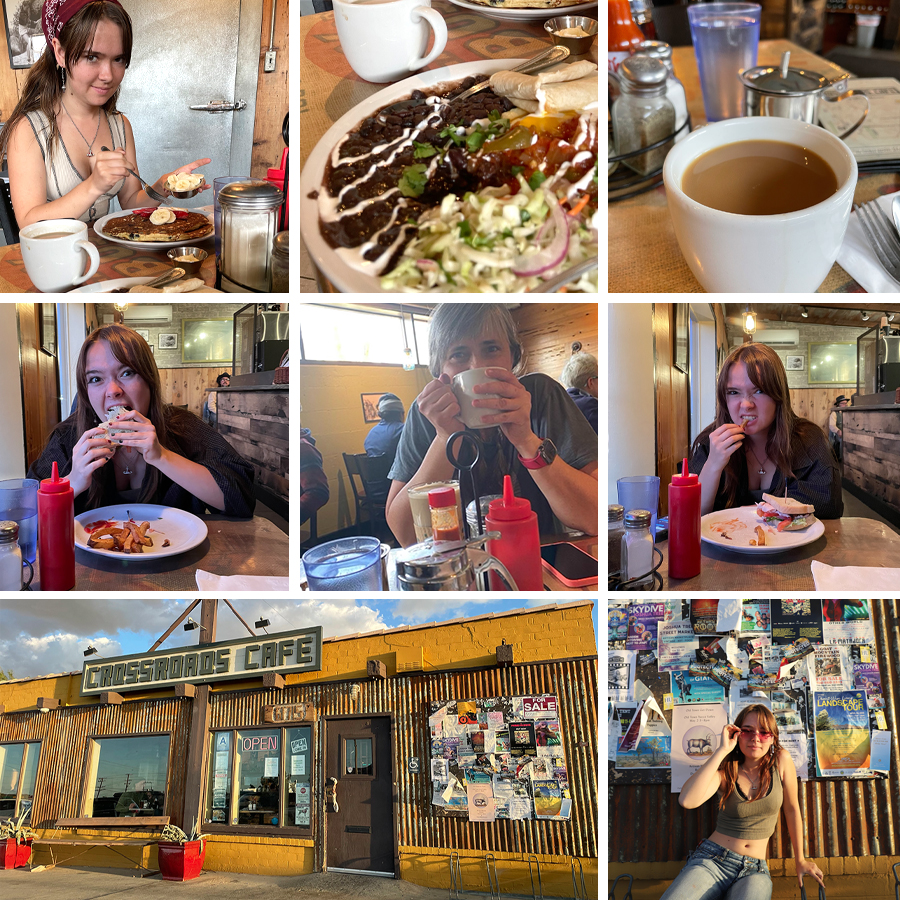 We became locals at the Crossroads Cafe. Bug finally convinced me to make time for a sit-down breakfast on Sunday so we could actually try the breakfasts that Crossroads Cafe is famous for.  It was really good. If you’re out in the Joshua Tree area in the morning, I highly recommend it! It was hard for us to just pop in for food and go back to work because all the stores (really cool vintage stores and artsy bookstores and record stores) were open in the morning which is prime working time for me. Bug really wanted to shop but there was no time for that. I vow we’ll go back there someday and spend some leisure time just poking around. It’s a really cool artsy town. I could see myself living out there someday if I grow a really thick weather-repellent skin. 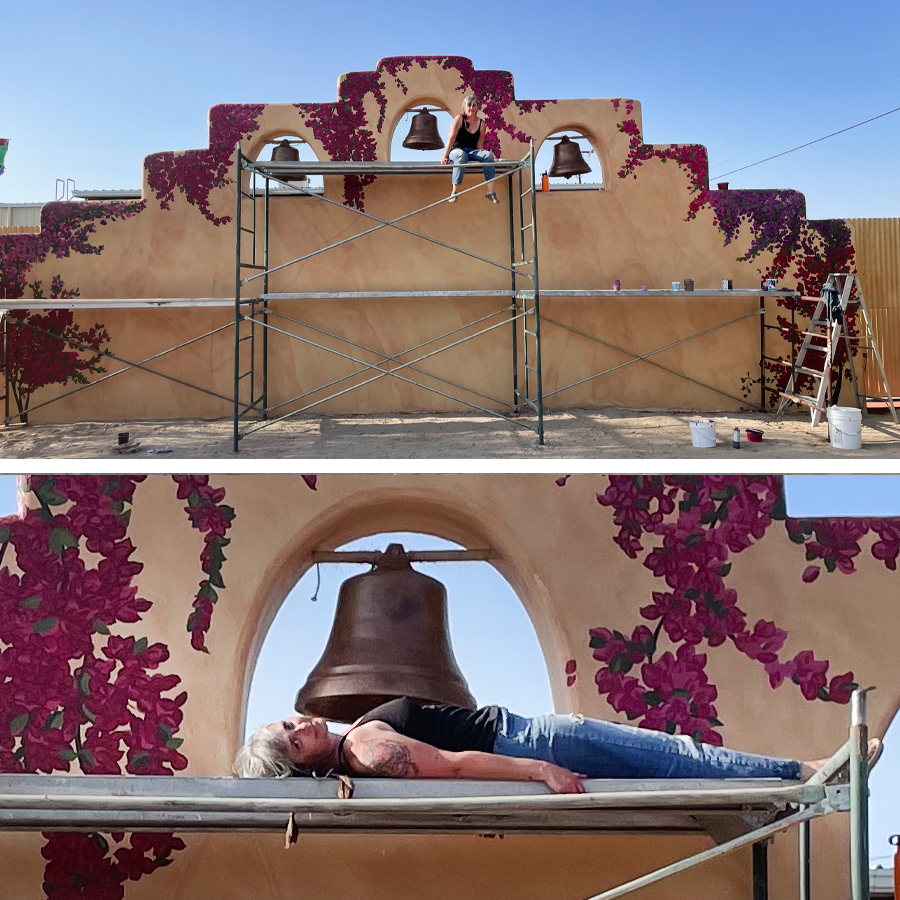 And that was that. I finished before dark on Sunday which was sooner than I expected.  I don’t have any good daytime photos of the mural without scaffolding but I’m sure I’ll get some soon.