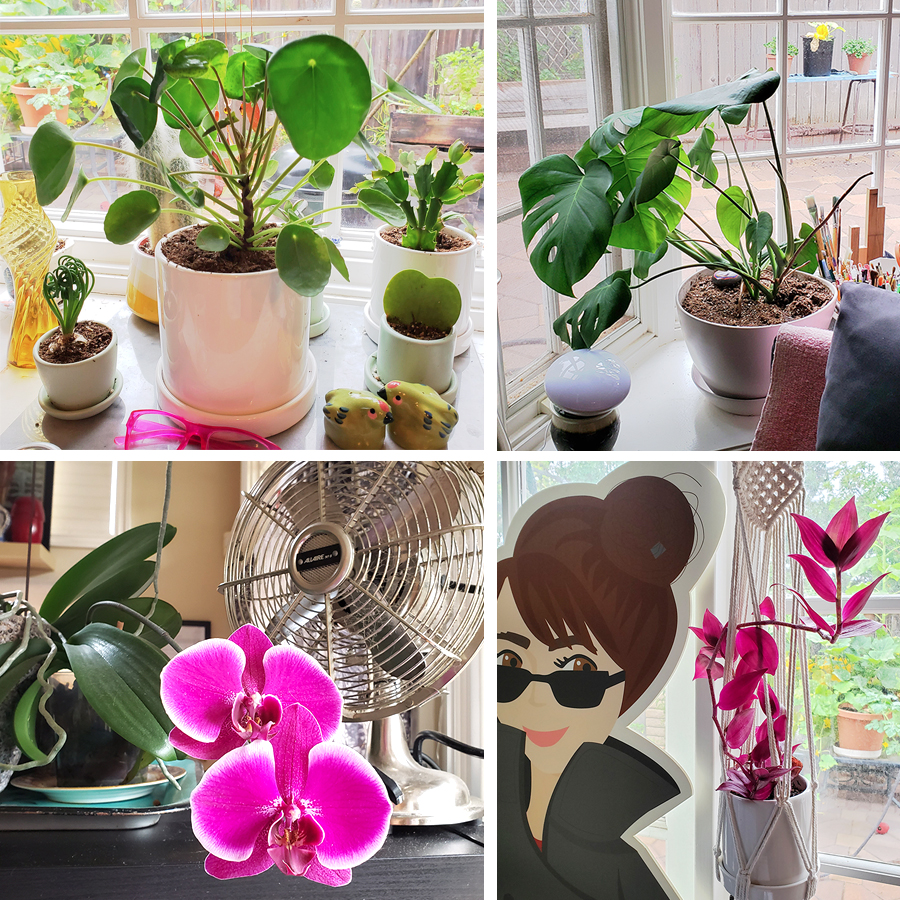 Plants make me happy. Do other people’s plants make you happy? Probably not but I love bragging about my plants. I love talking about plants. I love consuming social media about plants. These days these silly plants are what is helping me keep sane. Am I an expert gardener? No Way. Not at all. I have a long way to go. But I definitely like caring for plants and I think they like me caring for them.

I’ve been collecting plants for years. Most of them are doing fine. That monstera was in Bug’s room and it was plastered against her window like it was trying to get out so I moved it to my well-lit office and I’m hoping it perks up. The orchids I don’t even know what to say. They are growing roots right out of their pots and into the air. Dozens of roots just growing straight up. I have no idea how to replant them. How do you make roots go back into their pots? I asked Toby, the orchid expert, and he said he hates moth orchids and wouldn’t bother with them. He says the way they mass produce moth orchids these days is like smashing up orchid pulp and getting a hundred new plants. No art to it at all… I don’t know. I just can’t throw them away so they sit on my shelf staying happy and sending roots into the sky. I really need to do some research on moth orchids.

That purple plant by my giant Secret Agent Josephine, is the wonder plant. It just grows and grows. You can take clippings and make new plants in a week. I think it’s called a wandering jew, specifically: tradescantia zebrine. Payam bought it for me from a garage sale. Pretty good money-maker for that garage sale. I should propagate it and sell it at my garage sales. But for now I’m just populating my house and garden with them. 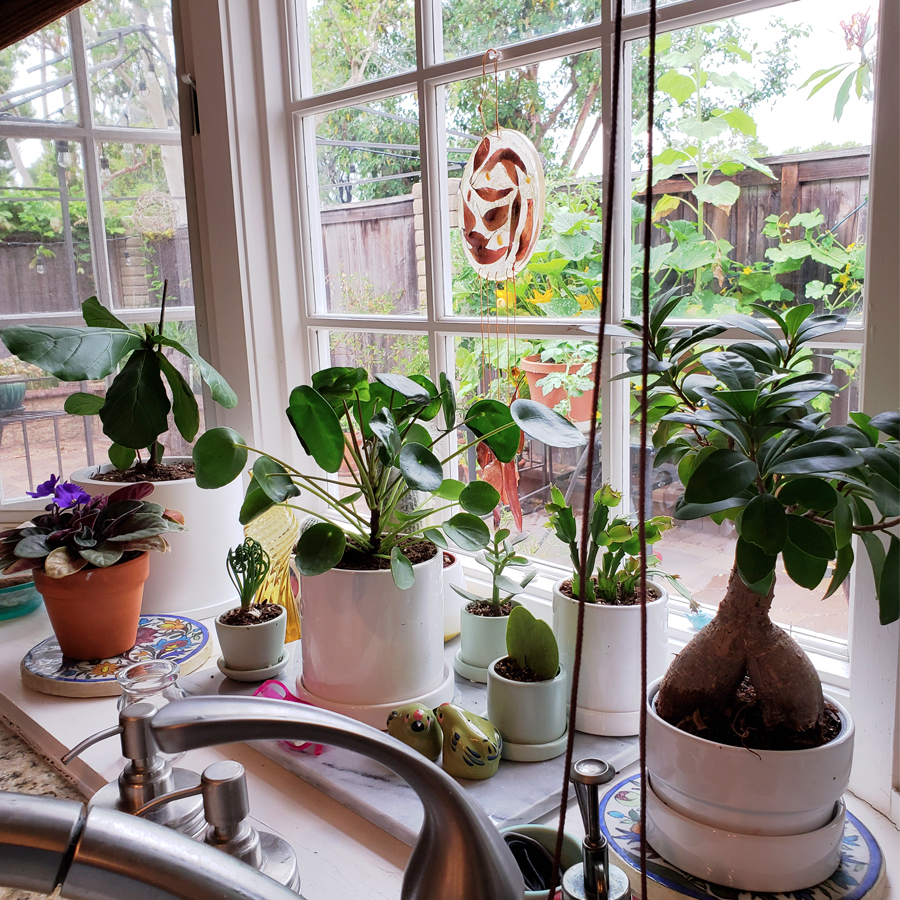 This is my kitchen window. I keep the high maintenance plants here. I should clarify that by saying high maintenance I don’t necessarily mean doing a lot of maintenance. I just have to watch these plants so they don’t up and die on me. They are very picky about their conditions but they also don’t like to be bothered. Kind of like cats. The African violet likes to be crowded and only watered from the bottom. The money plant is mysterious and half the time I can’t decide if it’s making new leaves or dying. The cacti are pretty chill. The fig spliced onto a ginger trunk bonsai is pretty chill also: a smart buy from Ikea. I think I want to replant it but then I guess that would take away from it’s bonsai-ness.

I have two fiddle leaf fig plants: Happy Fig and Sad Fig. Happy fig is in Bug’s room and doing fine. Sad fig is there in the left corner and isn’t sad anymore. He’s just sort of half sad. When I first got him in the mail he was super sad and had drooping leaves that signaled eminent doom but I did a really good job of ignoring him and only watering once a week. It only took about a year of ignoring his sadness and he is finally admitting that life is not so depressing after all.  Slowly he is blessing me with upwards facing leaves instead of downwards facing leaves That’s the thing about fiddle leaf figs. They take forever to do anything but they seem to thrive on gentle care, almost like you are pretending you don’t care right up until the day they are gasping for water and then you water them the allotted cup full of water (no more, no less) and they secretly day by day get better and better.

Remember my little fig who grew into a big fig in my old apartment. I thought I had a photo of him big (he was easily 5 or 6 feet tall.) but I can’t seem to find it. That poor guy he was such a trooper but I didn’t know fiddle leaf figs were so temperamental back then. I just had good luck because I lived in the world’s brightest apartment. When I moved to Payam’s, I stuck him in a corner that looked good with the furniture and he just up and died. It was really really sad. Everyday a new leaf fell off until there were no more and there was nothing I could do to revive him. Rest In Peace, Figgy.

But now I have two new baby figs and I’m being smart and keeping them in bright light only. 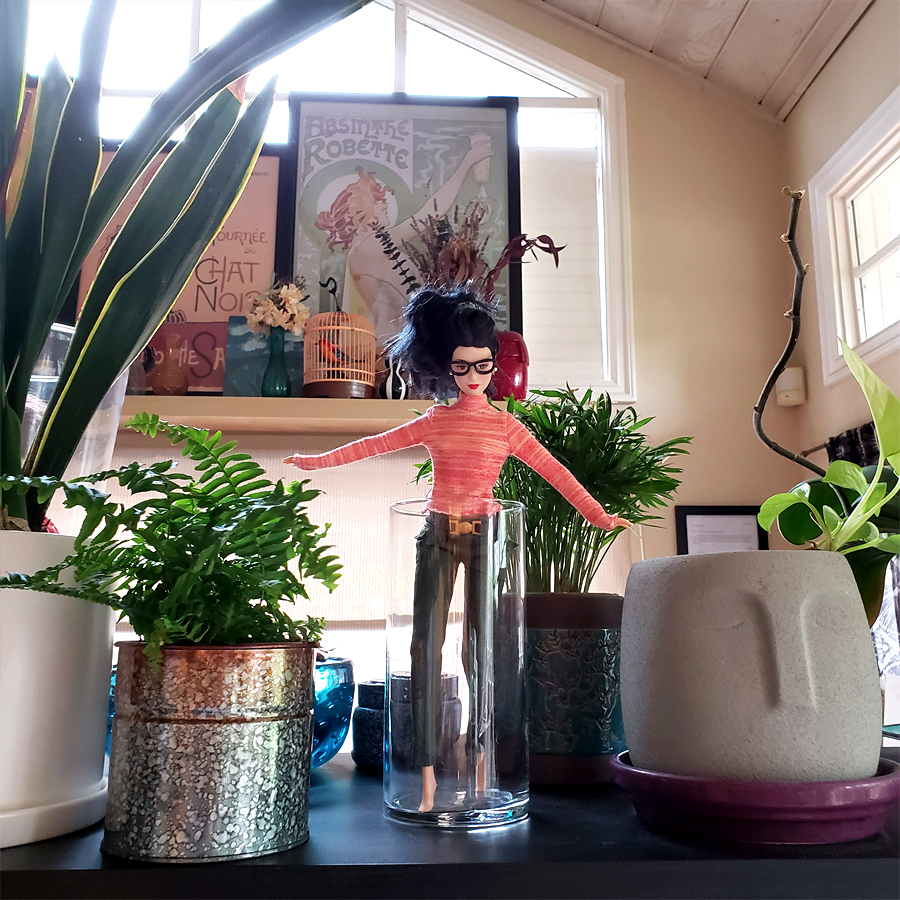 What else do I have going on? Oh yeah, I have two Barbies posing in the plants. I only have three Barbie dolls. Don’t call the hoarding police yet. I bought them thinking I’d do some cool miniature photography like SocalityBarbie  but it turns out it’s a lot harder to come up with funny captions than I thought. So I have fun posing them around the house to annoy the kids and Payam. They humor me. 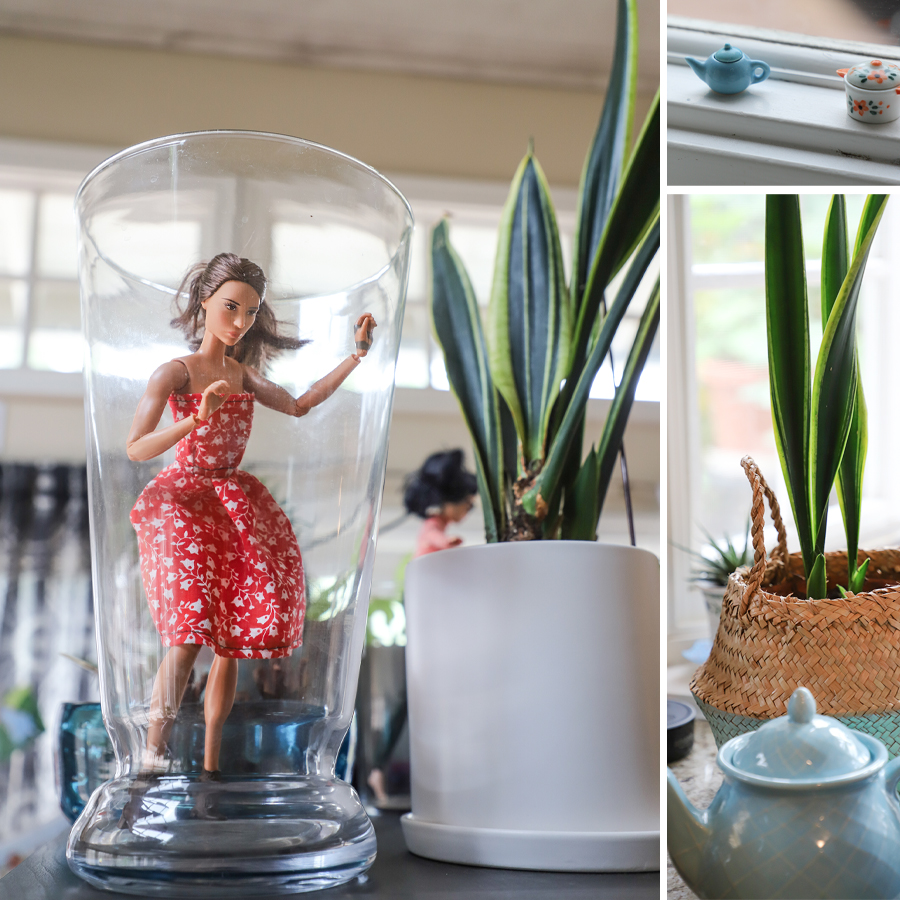 Lara (Croft) is trying to get out of my giant flower vase with no luck. Her expression is always perturbed. I’ve been wanting to get a beta fish and put it in that vase but I worry my house gets too hot AND I already have enough plants and pets to take care of. Wouldn’t it be cool though? Right up there with birds in a greenhouse? That is a dream of mine. Parakeets and finches living in a giant cage in the middle of my greenhouse filled with orchids and humidity. 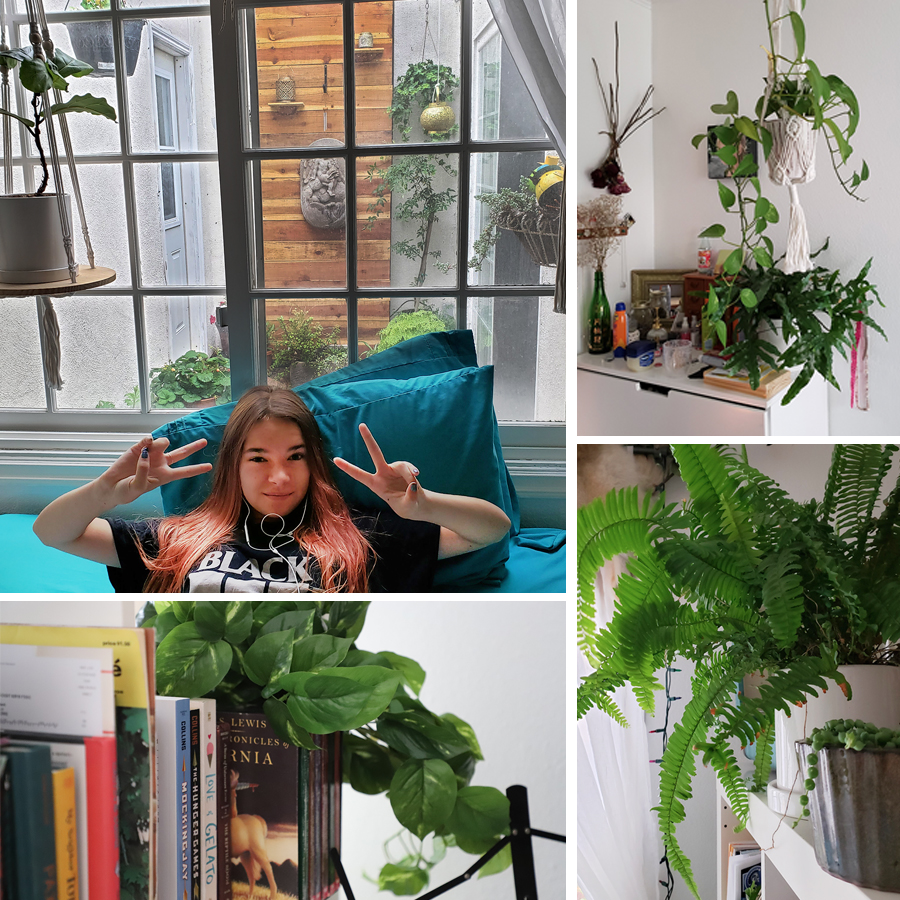 Obviously, Bug likes plants too. I’m so glad I’ve passed on the family green thumb. (Fake plant alert there by the Chronicle of Narnia books. That’s left over from our locker craft from alphamom.) 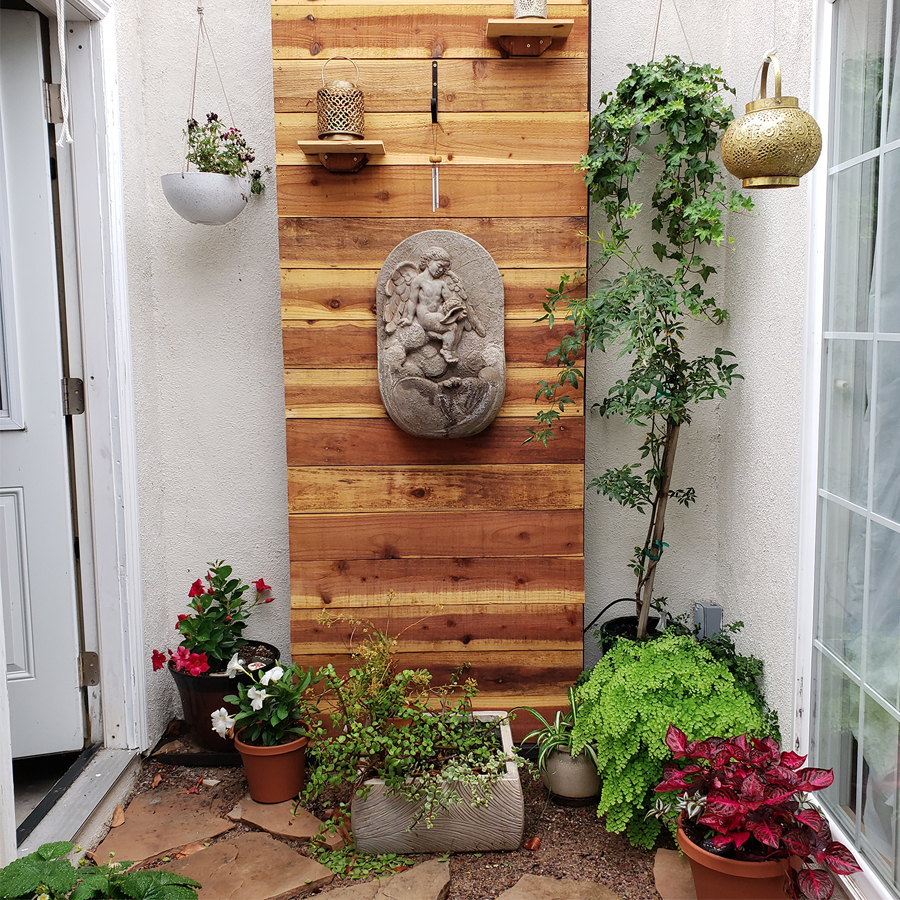 Oh yeah! The atrium! It’s slowly coming along plant by plant. I want to do a whole post on the process we went through making it but I’m waiting until we get the swing installed. Payam had neck surgery so that is not happening anytime soon. He can’t look up while he’s wearing a neck brace but he keeps telling me not to hire someone to do it because he really wants to do it. We’ll see. 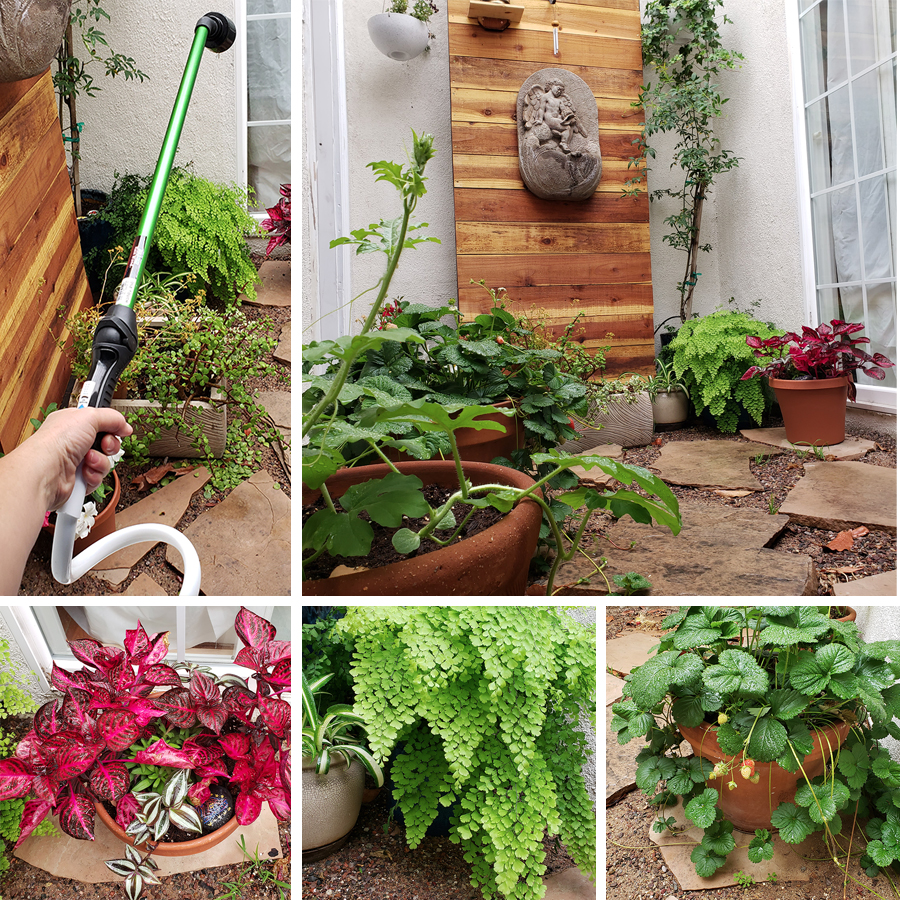 You know why the atrium is thriving? Because I figured out a water source finally! The laundry room is on the other side and Payam installed a long hose from the faucet that attaches to the washing machine. I just have to switch it on (carefully making sure the hose is outside of the garage and in the atrium before I turn it on) and viola! Water! The long wand is bomb. I water the whole thing down daily to keep the moisture up which seems to be the trick to keeping the maidenhair fern alive. Yes, I said that right. I have managed to keep a maidenhair fern alive! 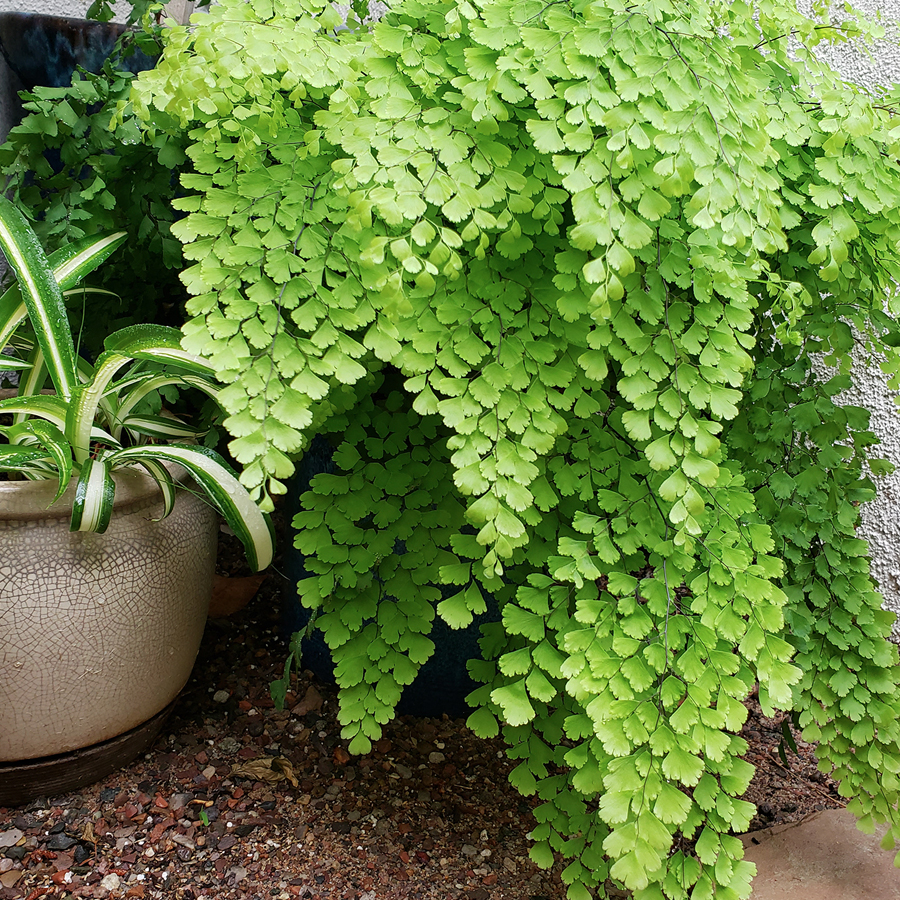 Behold its beauty. I guess I have finally cracked the maidenhair code. I have killed so many of these ferns over the years. It turns out they like being outside in the shade. They like a little breeze and lots of water. Who knew?!  You’d think I’d figure this out from visiting Fern Canyon in Norther California but I never did until now. I thought our atrium would get too hot for the fern but so far, so good. 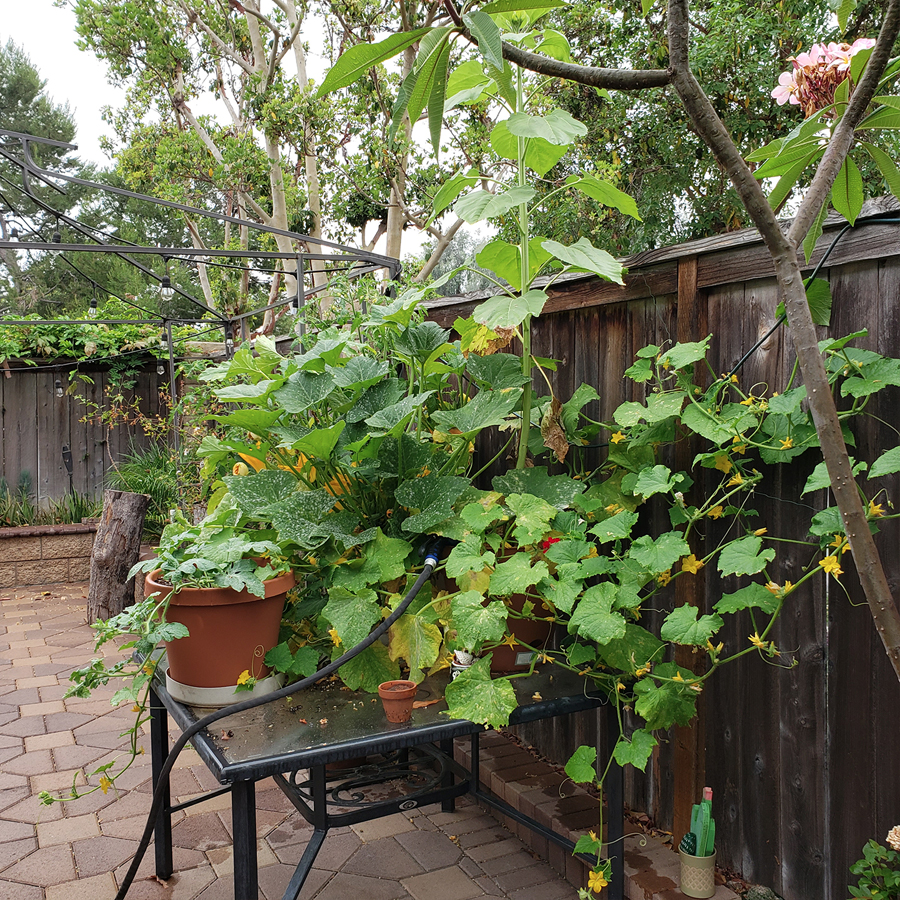 Meanwhile in the backyard here is my “bombastic garden.” I’ve got two tomato plants, one yellow squash, one zucchini and a bunch of cucumbers climbing everywhere. The squash has some kind of powered mildew on the leaves that I am not happy about. I’m still doing my research but I’m thinking it’s because we’ve had coolish weather (damp mornings) and I planted my plants too close together. I planted them from seed this year and what I thought was plenty of room is now turning out to be NOT. When the plants were babies they looked so small in their big giant pots. Now their pots are dwarfed and the vines look like they are trying to take over my fence. Next year I’ll do a better job spacing them apart. 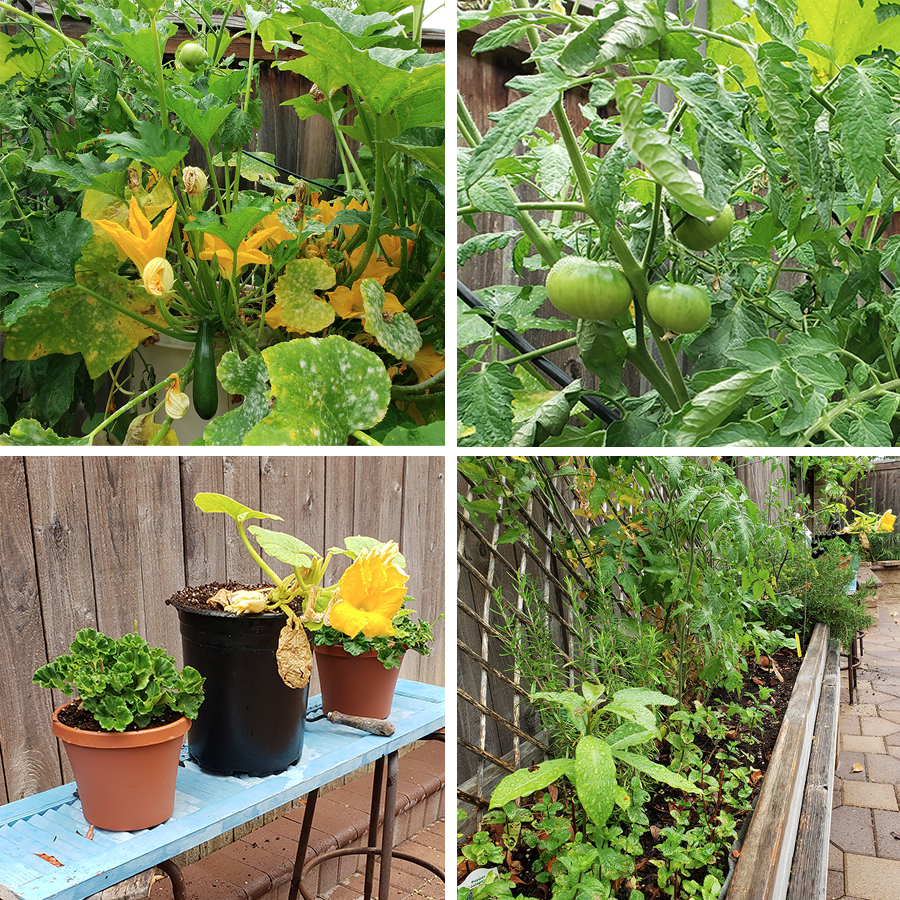 Squash, tomatoes AND A PUMPKIN! I really hope it makes it and is still around for Halloween. I’ve never grown my own pumpkin before (though my dad always did in our family garden) and I’m super excited about it. I also have a rogue avocado growing in my back garden. I got so tired of trying to grow a seed in the house I threw it in my garden and forgot about it. Then magically a year later I have this plant. We also threw some potatoes in the ground and they are coming up too in-between some rosemary and mint. What can I say, I don’t mind chaos. I am not a neat and tidy rows kind of person. 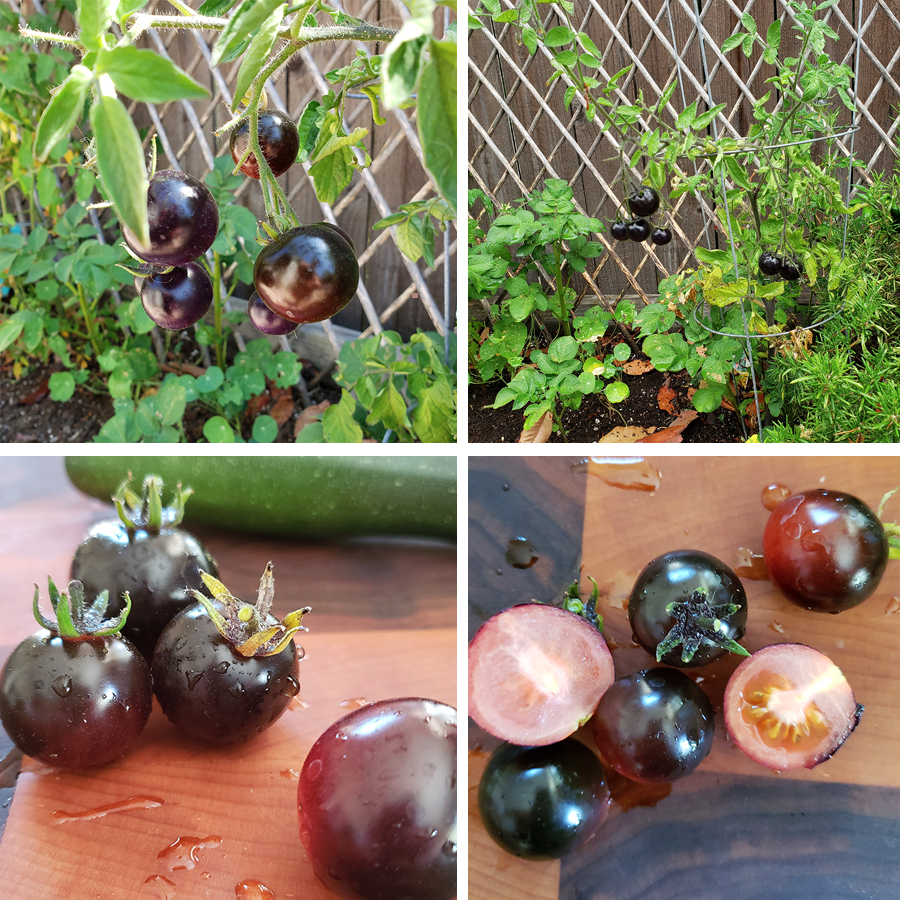 These are the famous black tomatoes. “Indigo Rose” they are called. They look really cool but they don’t taste anything special. It could be my garden though. They don’t get a ton of sun and I think tomatoes need hot dry weather to really concentrate their flavor. Of course I made that up and it’s my opinion that is void of any scientific evidence. But it seems to make sense to me. The best tomatoes I ever had was when I lived in the sticks and it was hot and dry all the time. 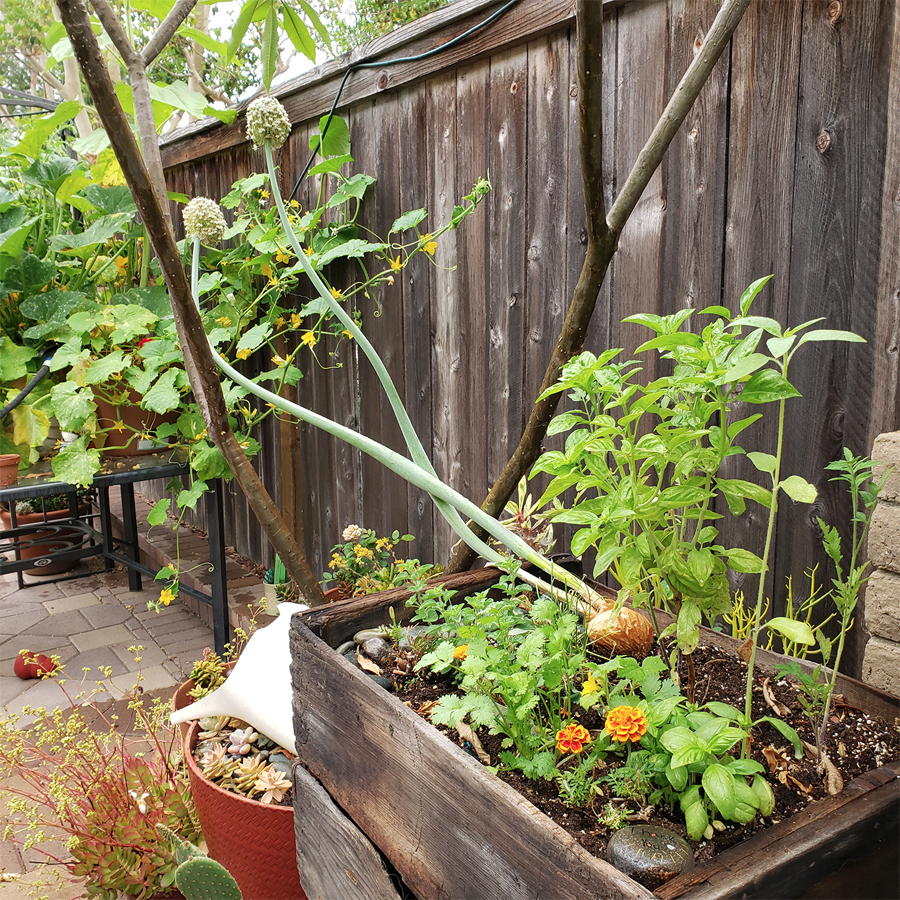 This is my herb garden. It’s a bunch of old wooden orange packing boxes stacked on top of each other. The bottom ones (not pictured) have cacti growing in them because that is the only plant that Cody will not eat. I’m surprised he hasn’t mowed down my cucumber vines yet but I think he hasn’t noticed them since they crept in so slowly. 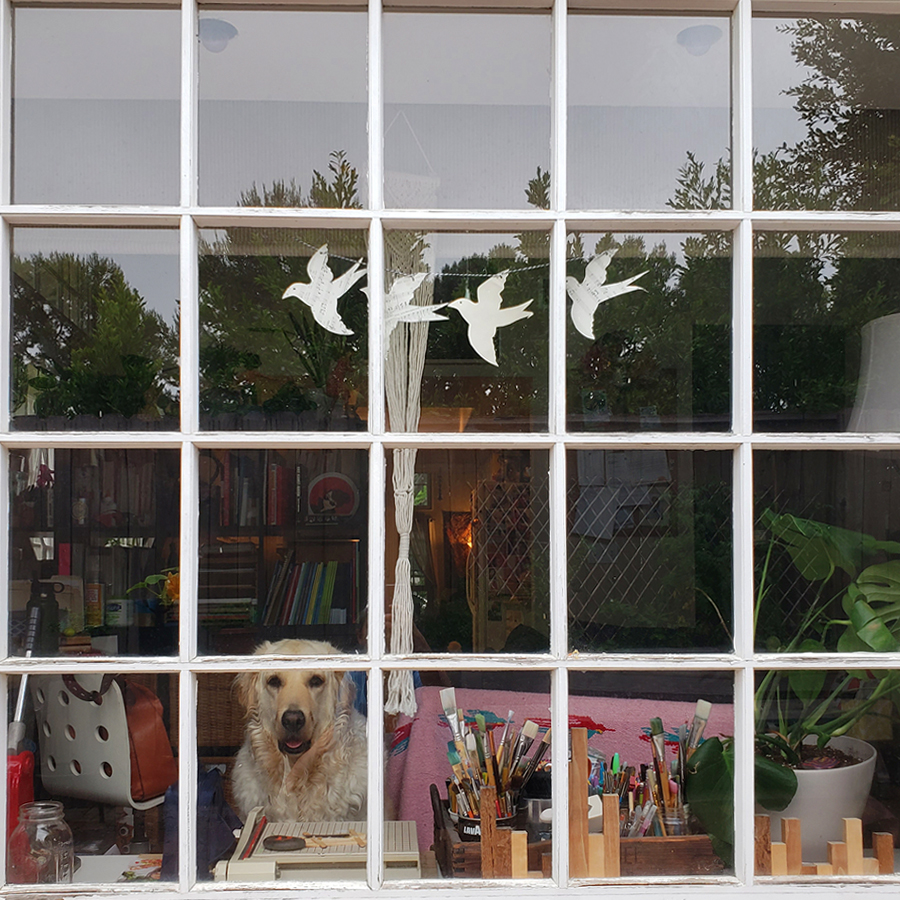 And that’s Cody watching me garden and take photos from inside the house. He is my constant (codependent) companion.

*Do you see your paper doves gingermog? :)