posted in out out out of the house!, solo adventuring, travel on August 5, 2019 by SAJ 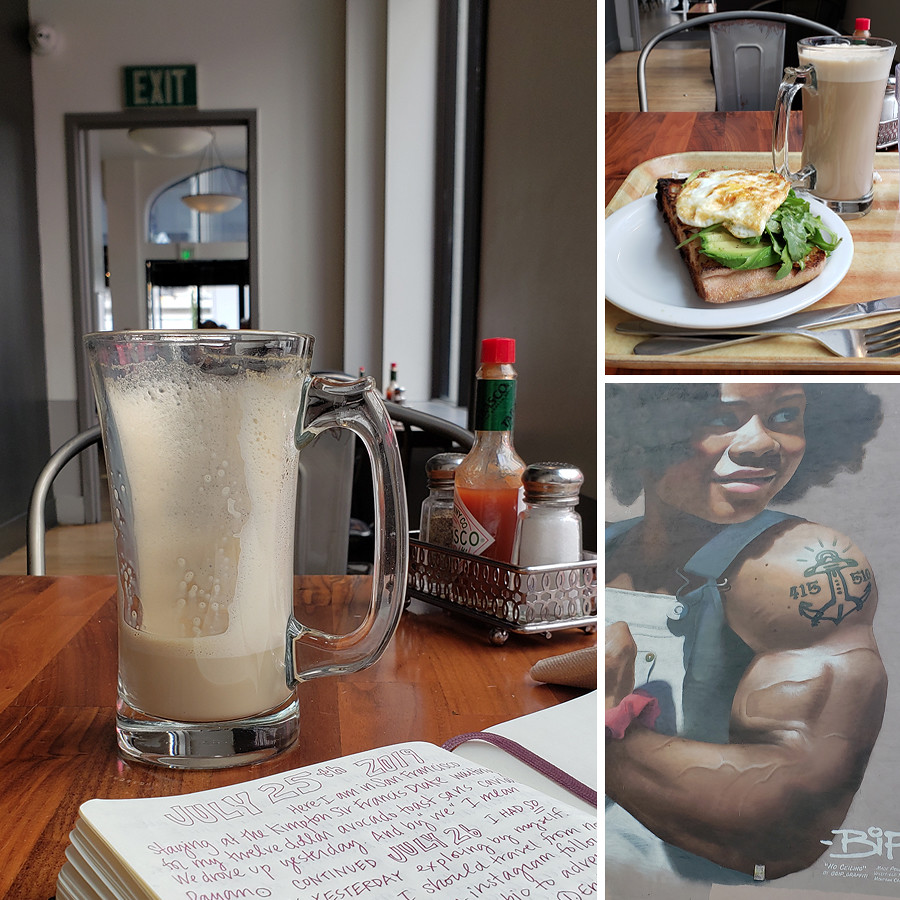 On my second day in San Francisco I decided to go to SFMOMA. I’m not really a museum person but I want to be. Sometimes I get overloaded on art, kind of like hanging out on Pinterest all day and before you know it you have no motivation to be creative at all because everybody else is way more creative than you’ll ever be. I almost do better in a vacuum. BUT! I do love art so off to the art museum I did go! 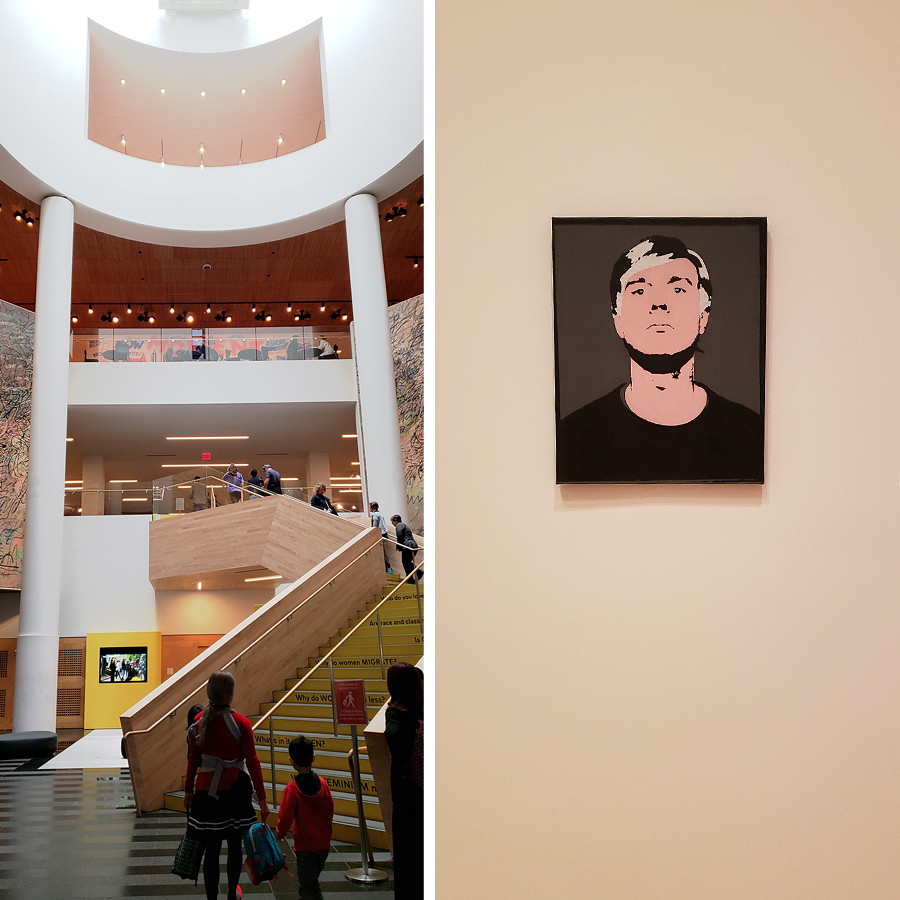 I paid an extra ten bucks to see the Warhol exhibit and I’m glad I did. I’m not a super fan or anything but I learned a lot about him and found myself relating  to him. That’s always a good thing. Andy Warhol was a graphic artist first, like me. I can see that now but I never knew that before. He also was super awkward and decided to flaunt his flaws instead of try to cover them up. That’s something I could learn a lot from. 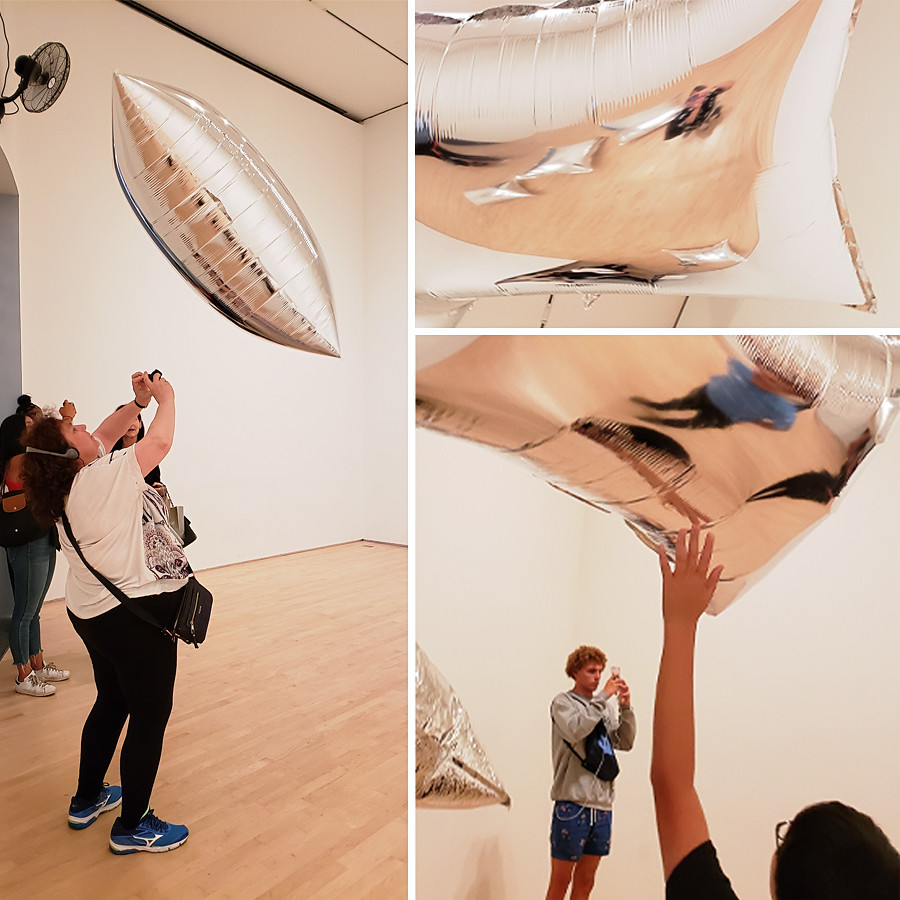 People feel conflicted about him and I can definitely see why (borrowing others’ talent to stay relevant etc…) but I cannot NOT love the floating helium pillows room. I mean, come on. Is that not the most brilliant thing ever and he did it way back in the 60s! I think we need more floating helium balloon rooms… too bad helium is going extinct. I wonder what it will be like when helium balloons no longer exist. That will be a sad sad day. 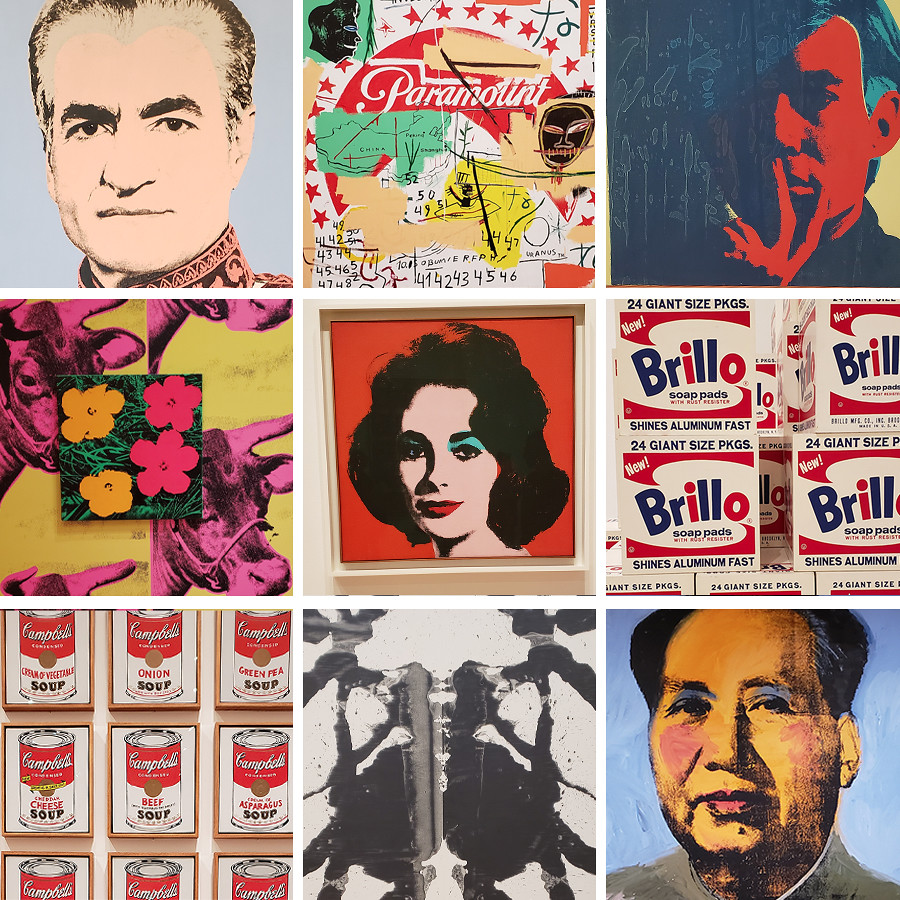 I wandered around listening to my headphones about his life and funny quotes performed by an actor pretending to be him. It’s really nice to go to a museum by yourself because you can take as long or as little time as you like. Sometimes I went fast, sometimes I went backwards and looked at things more than once. 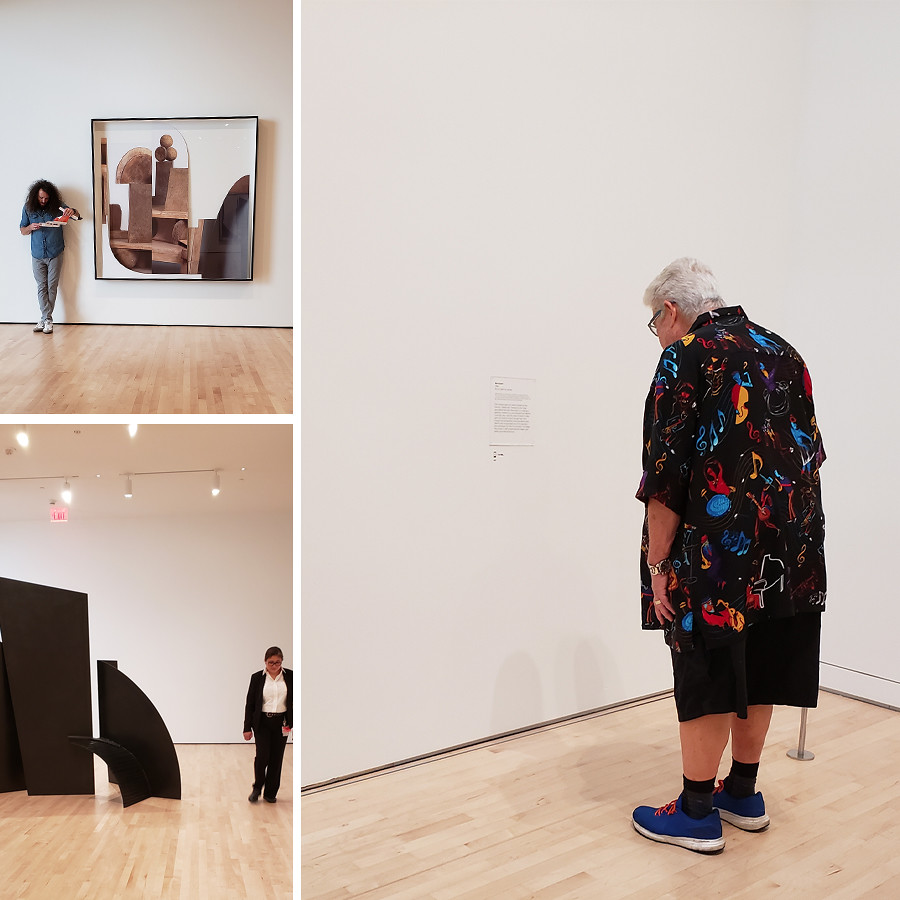 But what I really like is watching people at a museum. I could could make a coffee table book of photos of people staring and interacting with art but I’m not sure anybody would actually have time to look my book if I made it. There is just so much to look at these days. I miss being bored. Is that what growing up is? Not ever being bored anymore? 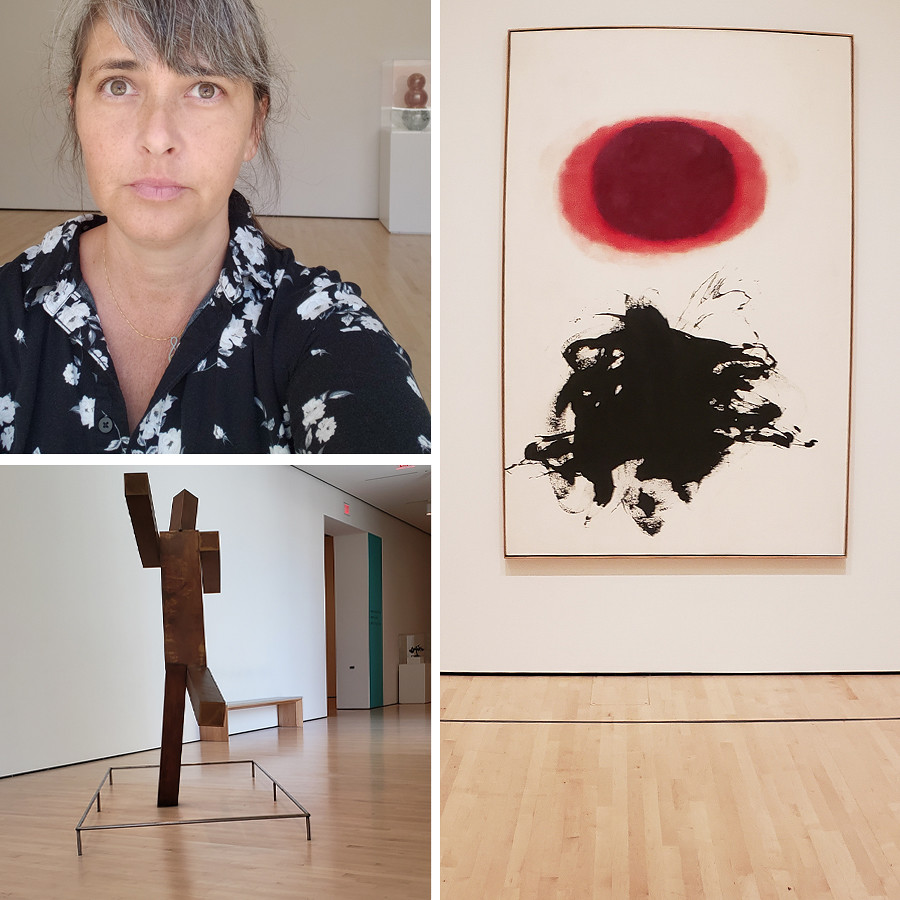 It was pleasant. Lots of clean lines and open space. Everything feeling very peaceful and zen. Maybe too zen. 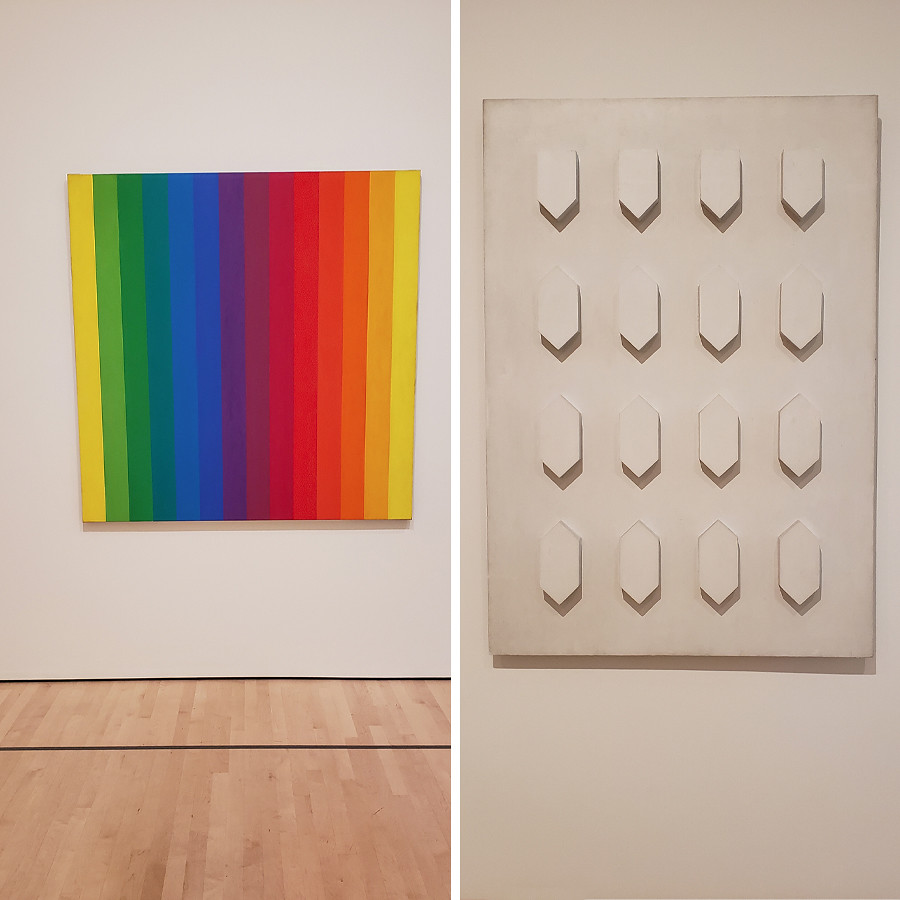 I pondered and took pictures of my favorite pieces. I wandered. Then an instagram friend suggested I visit the fifth floor for a coffee and a sweet. Once that idea was in my head I had to head straight there of course! 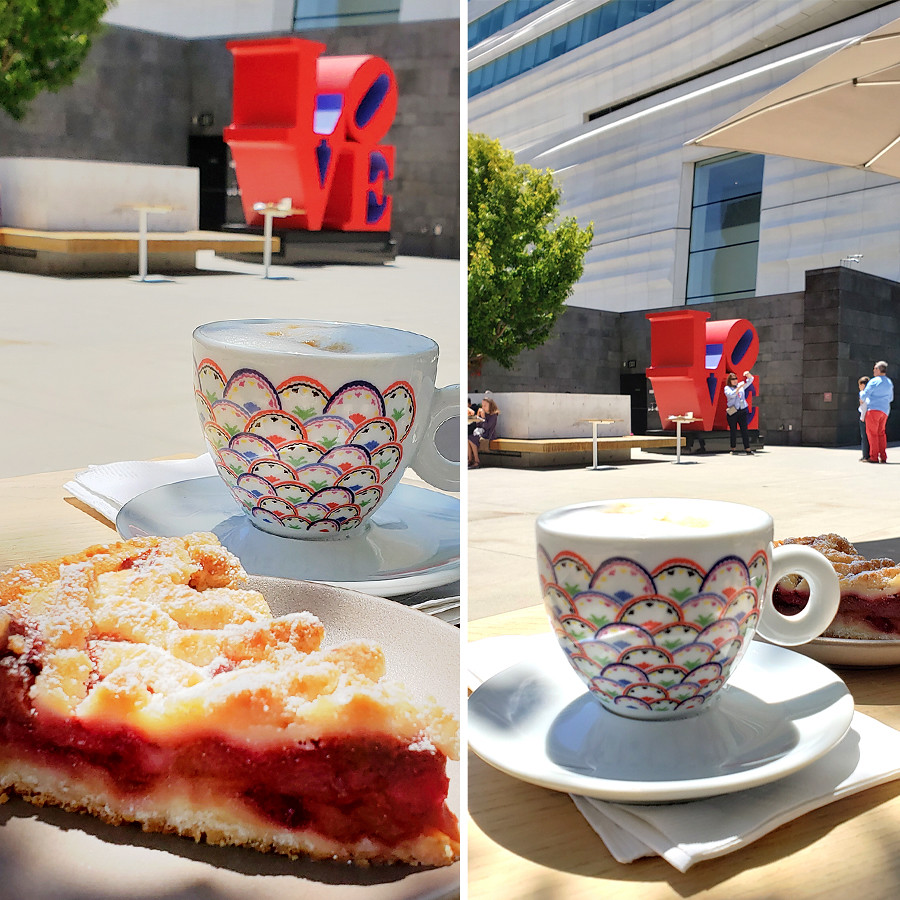 There nothing nicer than sitting outside by yourself on a perfectly sunny day with a perfectly aesthetically-pleasing coffee and a pastry. Well, maybe all that AND a friend to chat with but then you are so busy talking, you gobble down your snack too fast and you don’t get as much time to watch the people around you in the courtyard. I guess I do love being alone sometimes.

Before I knew it Payam was pinging me saying his work day was over so we met up and headed off on some touring together. We decided to take the car out of super expensive valet parking and see some further away sites. Starting at Lombard street of course. 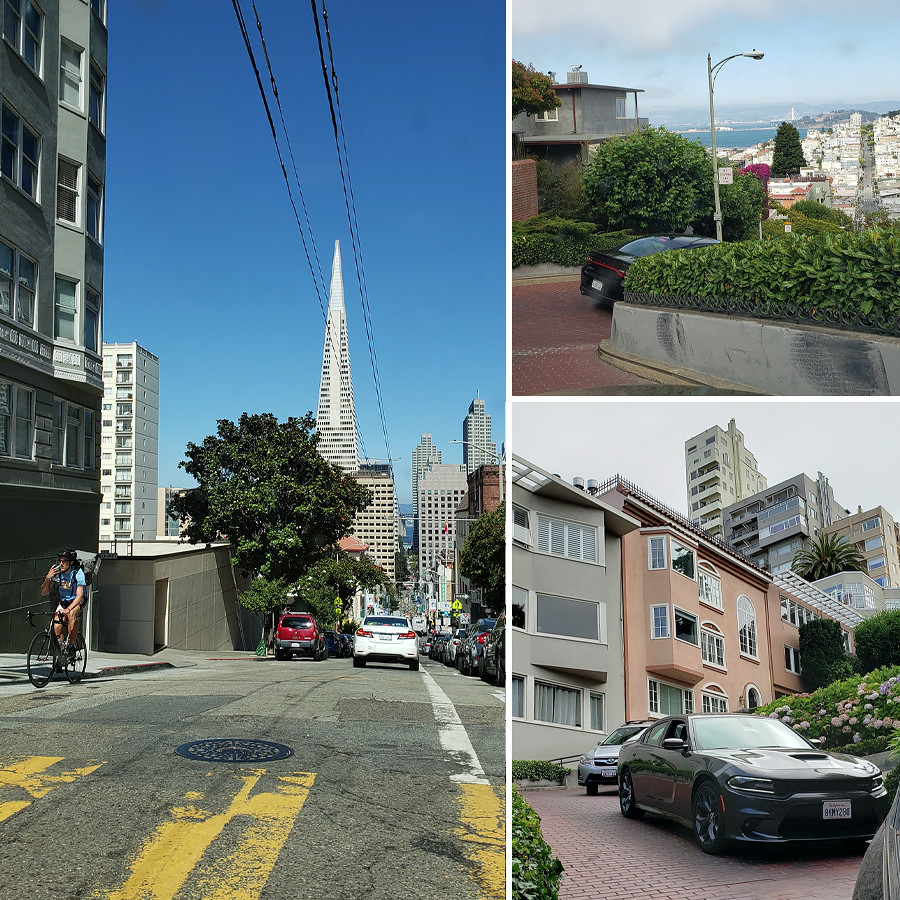 Man, what a crowded mess that street is with all the tourists. It was fun poking down the hill with the rest of the cars but there were no good angles to take pictures without getting out of the car and that was impossible too because parking was non-existent. I didn’t care that much since I’ve been there before but it was fun to go just to say we did.

Then we headed to the Gold Gate Bridge. Le sigh… 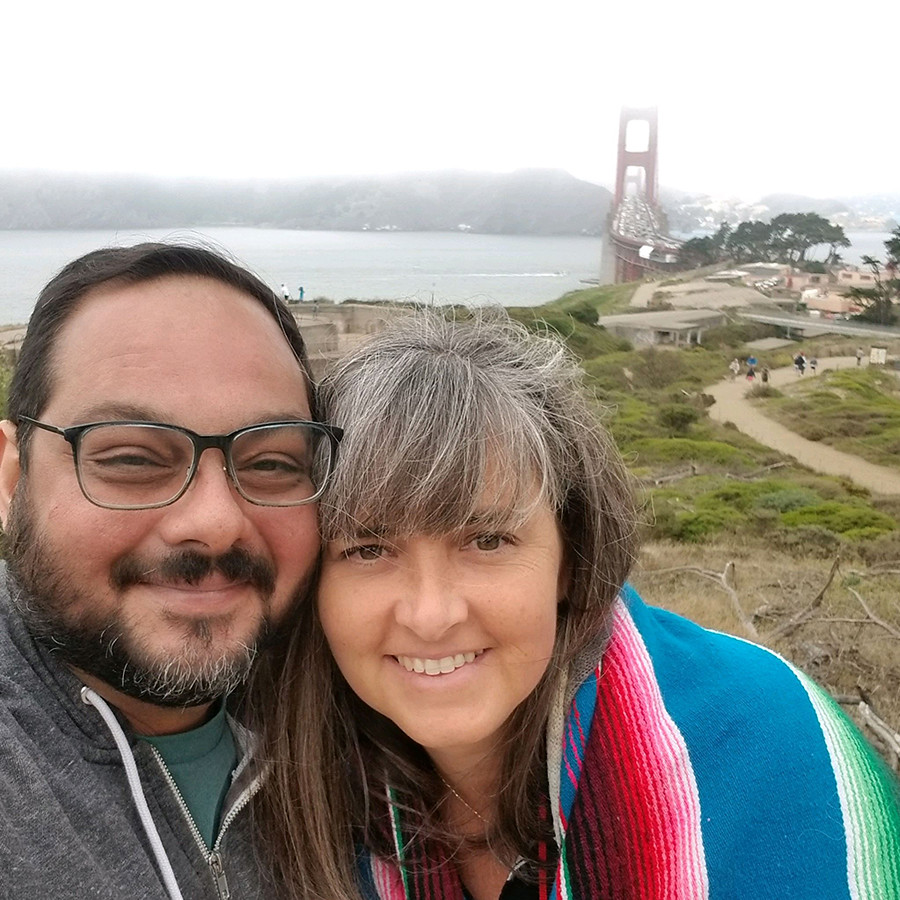 We took an early exit and discovered The Presidio. I think I’ve been here when I was a kid but I don’t remember it clearly at all. I didn’t know there were so many bunkers and hideouts to explore. I would have loved to explore more if it wasn’t so freakishly freezing cold. Why is San Francisco so arctic all the time? Thankfully I’ve been to this rodeo before so I know not to pack summer clothes in the summer but still, man, it’s just COLD.  I had to wrap up in a blanket that we keep in the car for picnics just not to go crazy. 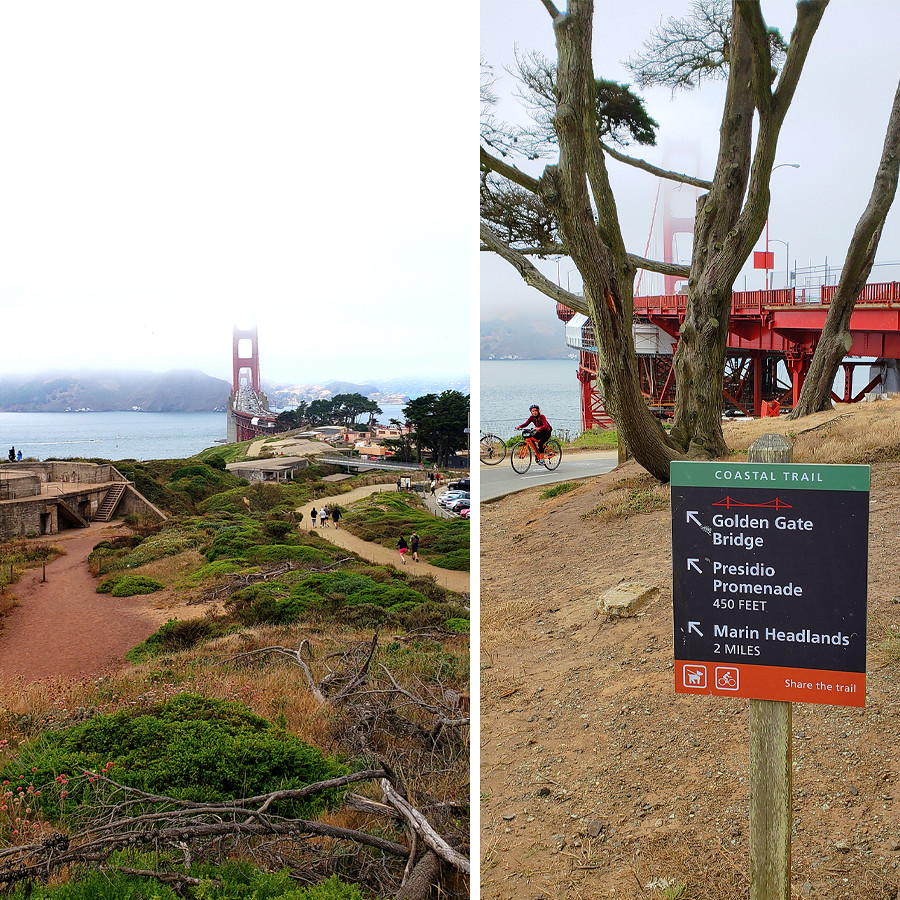 We walked and talked and chattered our teeth. 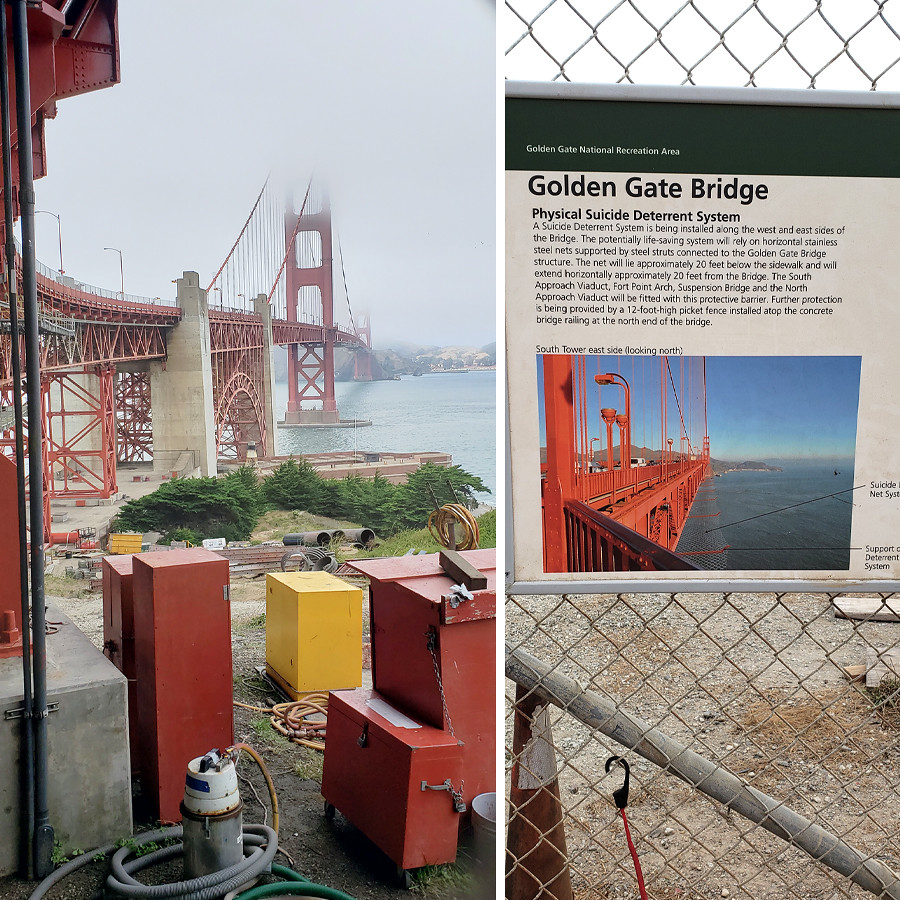 I found this new suicide prevention construction really sad. I’m glad they are doing it to save lives but it just makes me even more sad that so many people are that sad. I’ve had suicidal thoughts myself before so I cannot judge. It can happen to anyone. 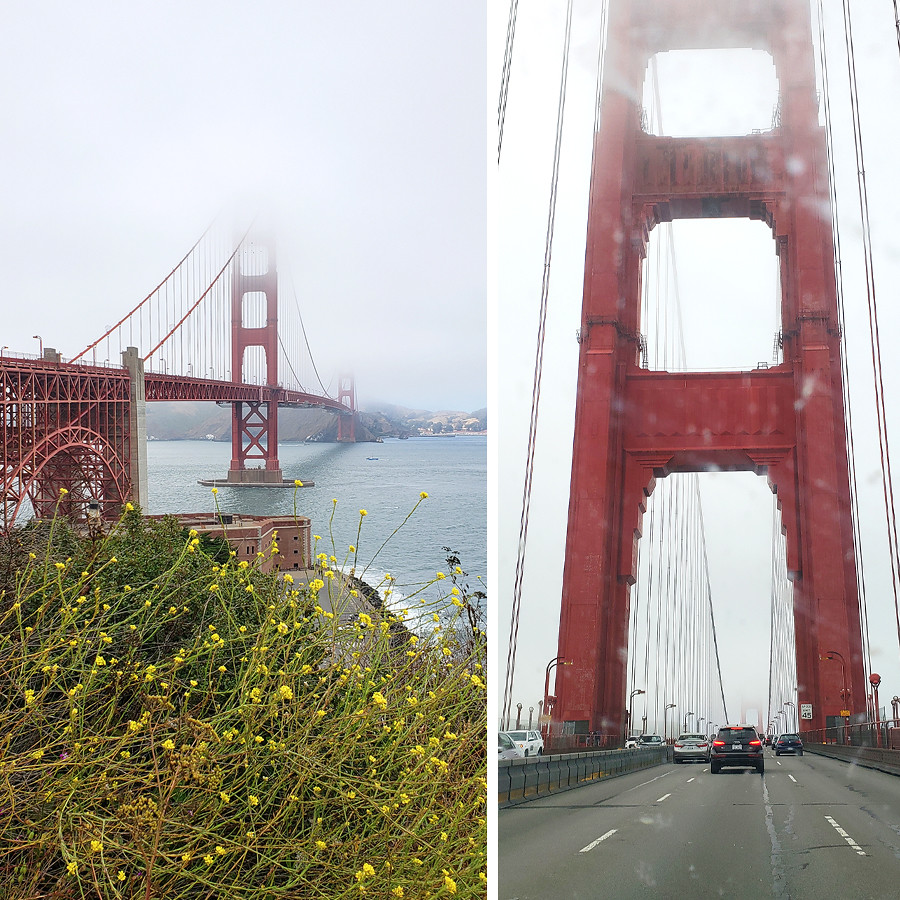 Then we ran back to our car and warmed up. Brrrrr! It was freezing. Seems nice now that I’m back home in 83 degree weather but at the time it was not. Southern Califorians are such pansies. 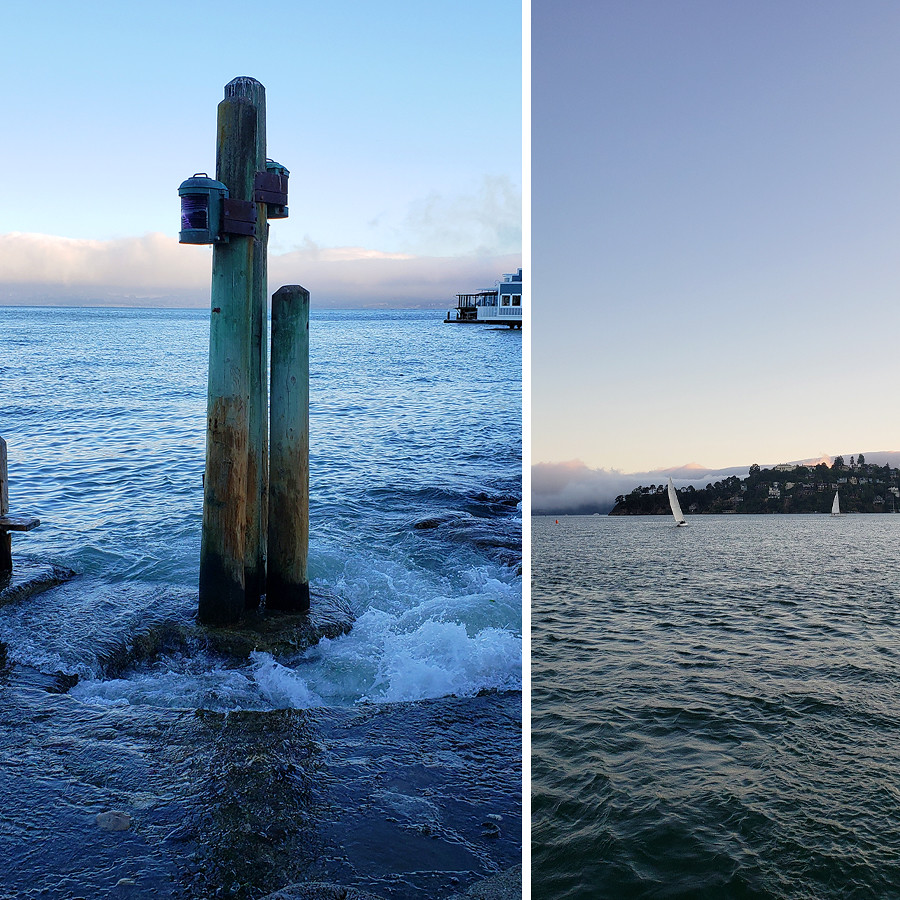 Payam wanted to show me the neighborhood he lived in when he first came to this country. He was born in Iran but came to the US when he was three. They lived in Tiburon and it was nice! We definitely did not grow up on the same side of the tracks, me and him. I couldn’t really see his house because you can only see the garage from the street so I didn’t take any pictures. But everything seemed really pretty and right by the water. Great views all around. 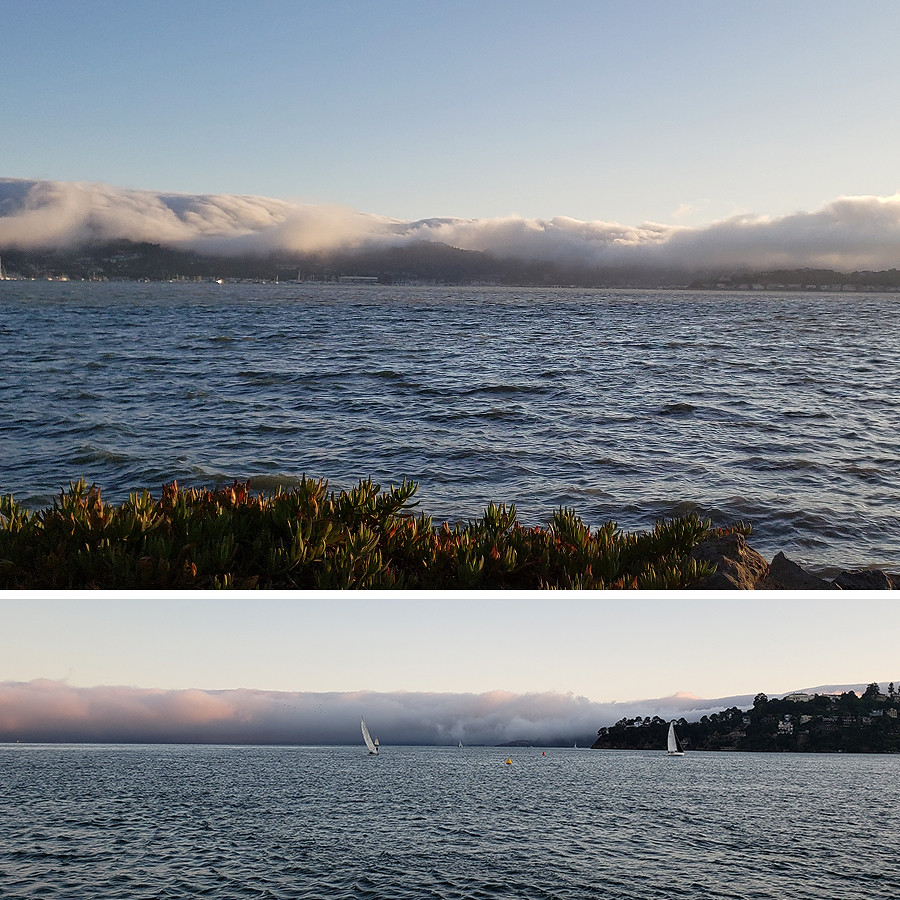 Slowly, Karl, the fog made his way over to this side of the bay and we decided we better head back to our hotel before we froze to death. Just kidding. We are wimps. 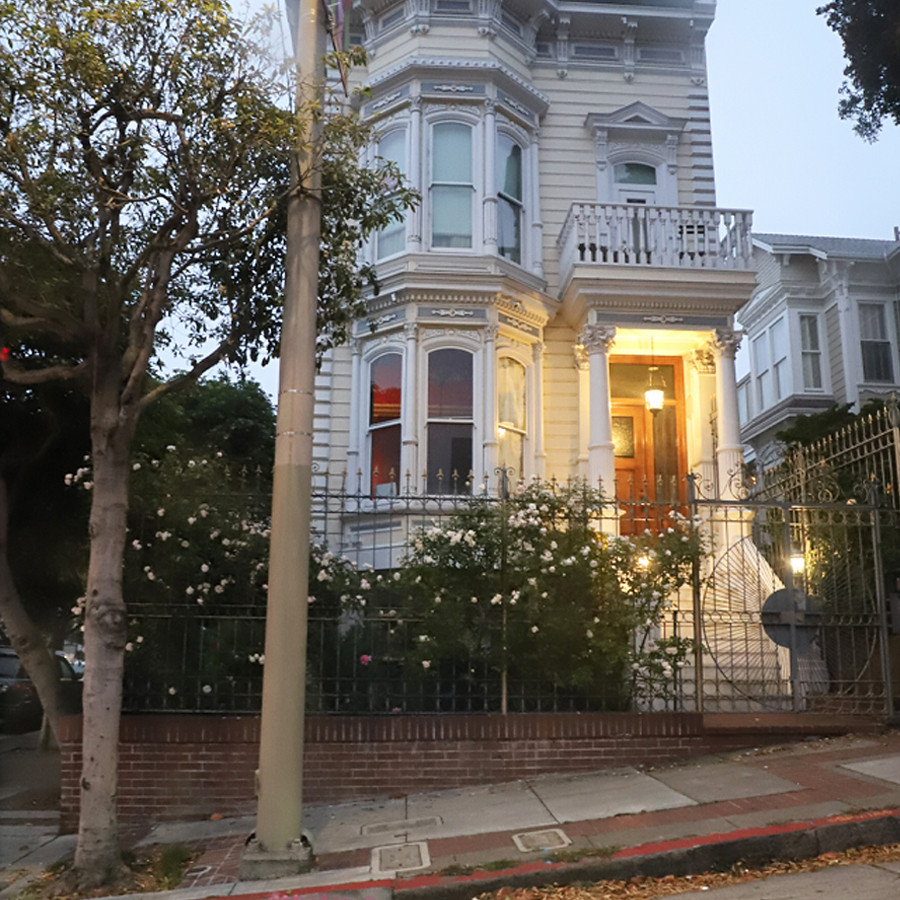 The next day I had tickets to the Museum of Ice Cream. I know I told you I was officially done with pop-up museums but this one was literally just down the street from us so I forced Payam to go with me. And guess what? It is probably the best one I have been to! I mean, yes, I am Over them with a capital O and I don’t need to ever go to one again but this one was really really cute. If you have kids I say definitely take them. If you are just trying to make your instagram feed more colorful then you’ll feel very unoriginal. Pop-up museums are so 2016. (Queue eye roll as If I know anything about anything.) 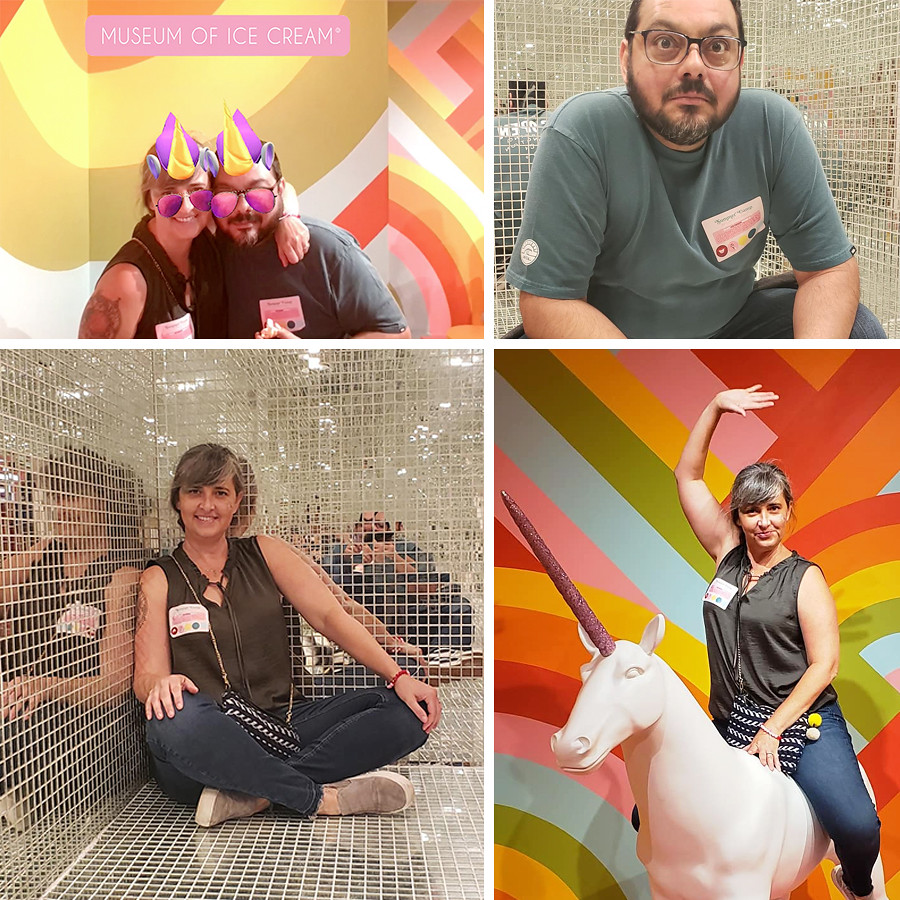 It was just super sweet and cute. They called us campers and we tried camping related treats… s’more ice cream, orange-cicle frozen pies… It was adorable and fun. 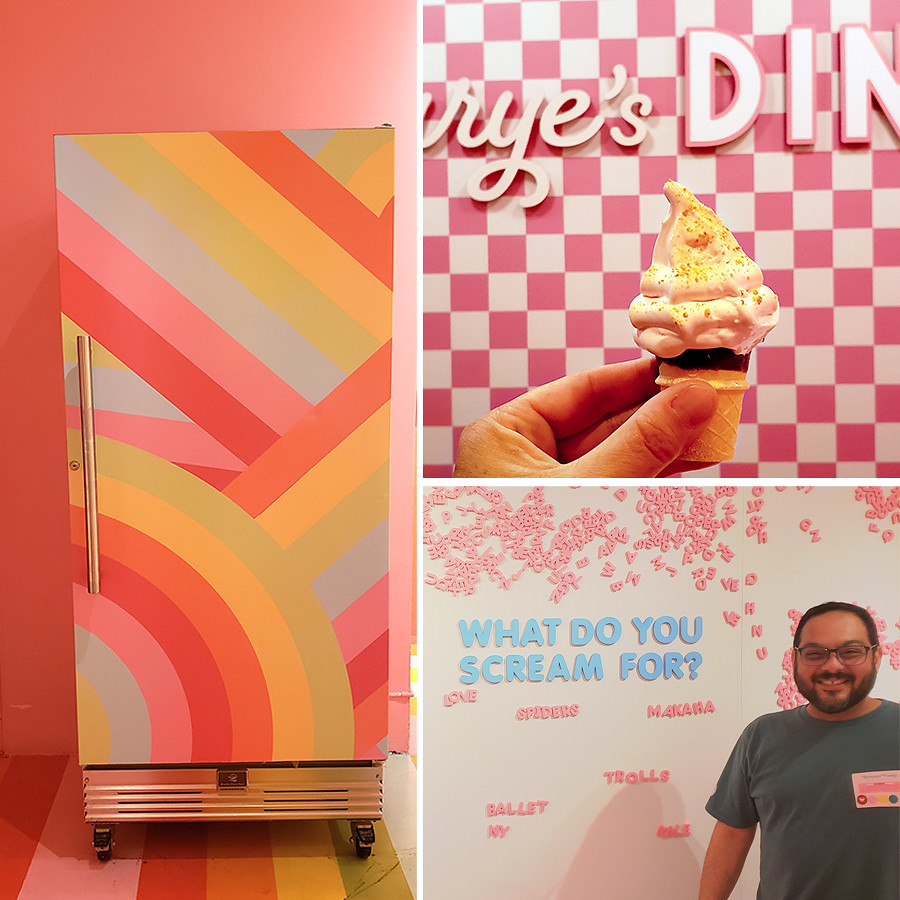 And you know what I love about Payam? He acted like a kid and had fun too. We can all be child-like more often I think. Right? Why take everything so seriously?

Do you know what Payam screams for? Kale. Screams in fear or anticipation of a tasty treat? Both I think. 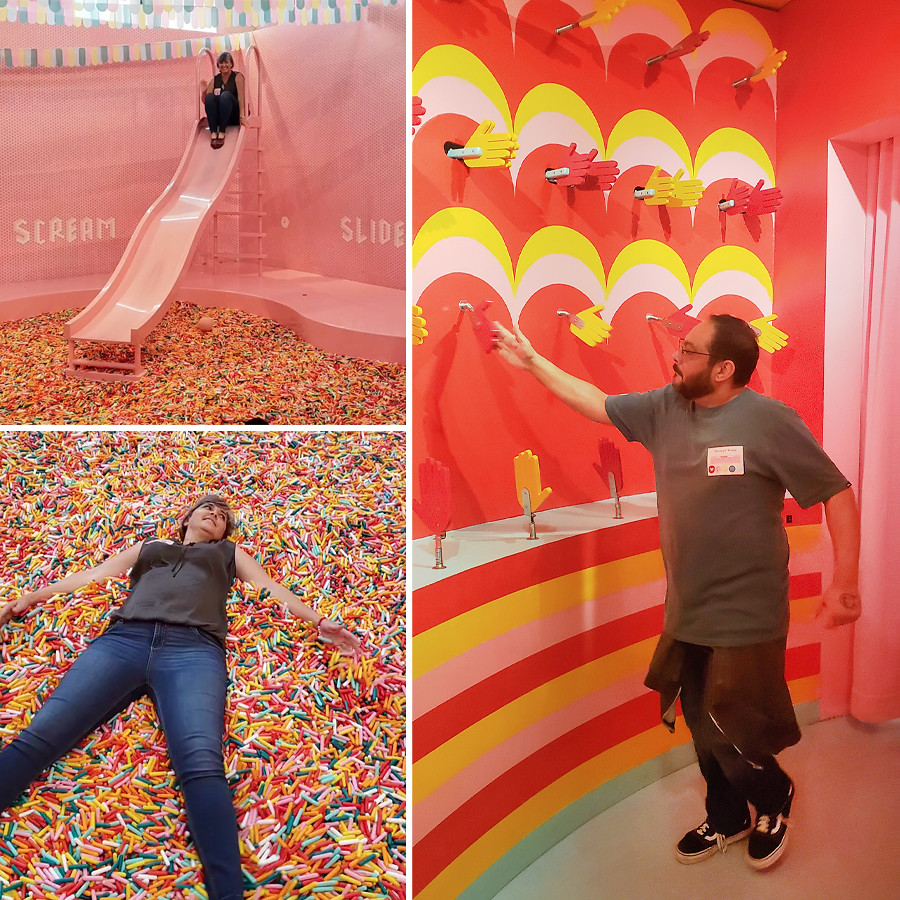 We interacted. We went the distance. We slapped robot hands and dove into a pool of sprinkles. And then we exited through the gift shop and bought pink plastic magnetic letters like the big fat consumeristic suckers we are.

Most of all we missed the girls. They would have loved it. Or not. They might have just rolled their eyes.