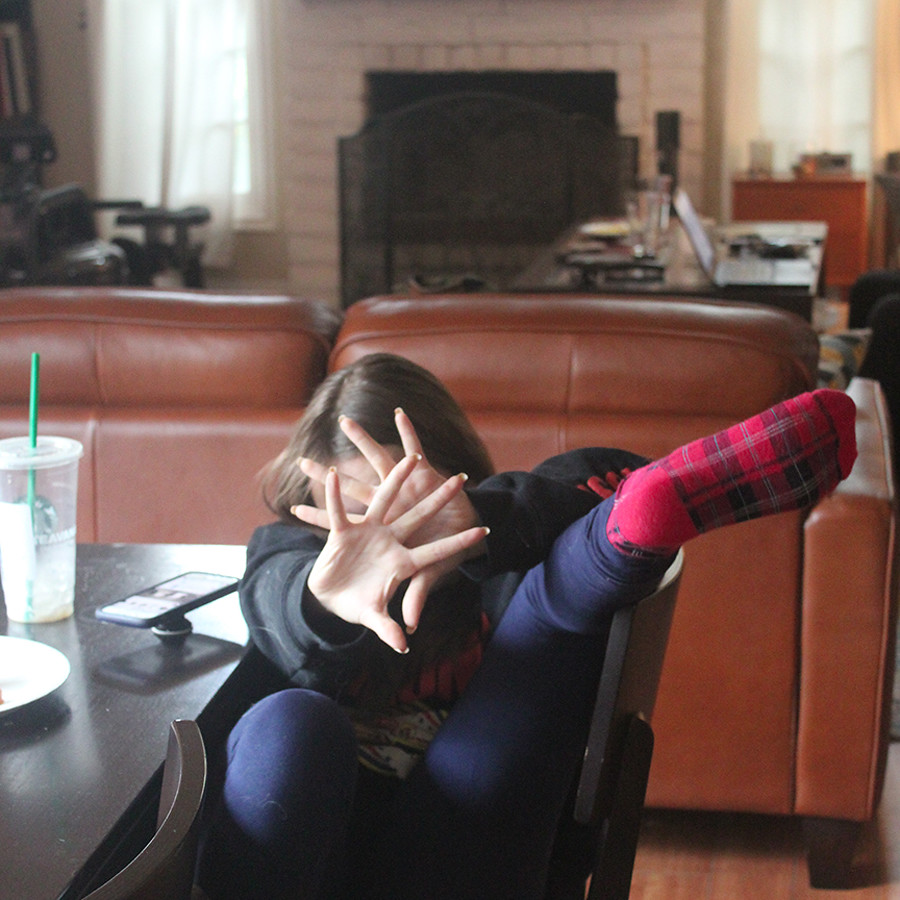 Bug turns thirteen tomorrow and she won’t let me take her picture. She’s just as obstinate at thirteen as she was when she was three days old. Remember that story about the lactation nurse telling me I have a stubborn child? Remember how I couldn’t believe the nurse could judge the character of a baby when she was only three days old? Turns out that nurse was right and I have a feeling it’s not going to get any better from here on out.

I can take her picture tomorrow, she says, when she’s all dressed up in her birthday outfit that we don’t know what is yet. It will probably be leggings, an over-sized sweatshirt and her Hunter rain boots. That’s been her uniform as of late. She promises that we can do a photoshoot tomorrow and I can blog the whole thing. I’m excited about that but not getting my hopes up. In the meantime, I thought I’d just jot some things down about this age so that I can look back and remember it.

Bug is going through an adorable awkward stage. Sometimes it’s hard for me to see her struggle with acne and ever-changing pant sizes but I know it’s all part of life and she will be stronger for going through it. She’s kind of lead a charmed life in the looks department up until now so I think this recent difficult time will give her depth and strengthen her character, which really is all a mother wants for her child. I want her to be beautiful inside and out and sometimes being too pretty on the outside can make for really ugly and selfish on the inside.

Of course I am the one who sees the worst in Bug because she can really let it all out and be herself around me. I am thankful for that. I am glad she has me for that. But when I make fun of her moods and her extremes, I’m sure there will be someone on the fringes of her life who will look aghast and say, What? How could you say such a thing about sweet innocent Bug?! Believe me, she can be a pill and a half. But she can also be really really sweet.

We’ve been struggling with eating these days. Poor Bug is bombarded by of conflicting ideas when it comes to health and wellness. Between me attempting to be vegan (unsuccessfully), Payam trying to eat a low-carb diet for diabetics and Joon who lives on cheese pizza and pasta with ketchup, it has been mayhem trying to get Bug to eat properly. She is filled with mixed messages and suffering.  It doesn’t help that she has a science teacher that has been feeding her class information constantly about health and nutrition like she’s trying to right the American diet one seventh grader at a time. Smaller portions! No gluten! Don’t combine carbs with protein! And then there’s Toby’s girlfriend who takes her to holistic doctors and has her opinions too: Eat your blood type! No avocados! Eat red meat! Poor Bug is so overwhelmed by diet choices that sometimes she just doesn’t eat at all. And then after a day of starving and getting the shakes in math class she will drink a giant decaf venti latte, eat a full-fat, two-portion-size Starbucks brownie AND a bag of chips. Her poor body is freaking out.

I had to call her dad up and get to the bottom of this. We are going to create an eating disorder if we don’t calm this mess down. But these are the things that happen when your kid switches households every other week, watches her idols on youtube obsess over diets and disorders and is influenced by everyone. I think we are all suffering from this. I’m glad that we are getting healthier as a whole but in the meantime it’s really hard to figure out what is best. Starving yourself because you are crippled with indecision (and pickiness) is worse than just eating like a regular kid. So that’s thirteen.

I’m sure she will get through it. She loves food too much to stick to anything too drastic for too long. I just hope she sorts it out sooner than later.

You know what else is thirteen? Grossness.  Have I talked about Bug’s talon-like nails yet? It’s an on-going battle between us. I rue the day I decided to let her have gel nails. They are the gateway drug to dragon-lady disgustingness. I hate long nails, as anyone who knows me will attest. I have the shortest nails ever. I can’t stand a millimeter of fingernail pushing past my fingers because I was cursed with paper-thin nails that bend backwards which is bone-chillingly awful. So short is the only way to go for me. And because I have been so pro-short for so long, I have developed a phobia of long nails. To me, long nails are gross. They are bacteria scrapers. I cannot stand to look at the backside of a long nail. It’s that awful dirty color and looks like a claw…Shudder…

So you can see where this is going. Bug has the longest nails ever and loves to tap them on things while whispering “A.S.M.R” sensually. This gets on my nerves like well, fingernails on a chalk board. And it’s not like Bug is the cleanest person on the planet since she also subscribes to the once-a-week shower schedule that smelly teens seem to be so fond of. You get my drift. I don’t usually like to embarrass her on the internet but this has been an ongoing argument between us for months so I’m hoping there will be some family members out there reading this that might get on my side of the argument.

But thirteen is also long conversations in the car about everything under the sun. I remember talking to my dad about deep topics on the way to middle school and here I am doing the same thing with my middle-schooler and she’s even deeper than I ever was. She loves to visit my parents. She loves cats and puppies. We bond over just about every cute thing the dogs do. She sends me Pinterest pins of cute outfits and funny t-shirt sayings she knows I’ll like. She saves memes for me and includes me in stories to her friends on instagram. I know you are not supposed to be “friends” with your kid but I really feel like we are anyway. She’s everything I ever wanted in a daughter and then some. I know everyone says that. But it really is true and I hope we keep bonding over cats and puppies and coffee and cute outfits…and maybe someday short nails. Heh.

We are very excited about her birthday party this weekend. (If it ever stops raining!!) We’ve planned a succulent-themed party and plan to serve hamburgers with guacamole (her favorite) outside on a table decorated with succulents. We’re also bringing back the green food bar (from her Great Big Green Puppet Show Birthday). We’ll paint planters and have a succulent planting craft and then eat cupcakes for dessert that look like succulents planted in terra cotta pots. It’s no where near the crazy over-the-toppedness of all her other parties but it’s nice because she is really doing all the work herself. She made her own invitations. She shopped for decorations and has dictated pretty much everything down to the “no gifts please” policy. I’m sure I will be reporting on this later.

So happy birthday, Bug, you complicated beautiful stubborn half grown-up!

We’ll see you tomorrow for a full photoshoot. You promised!