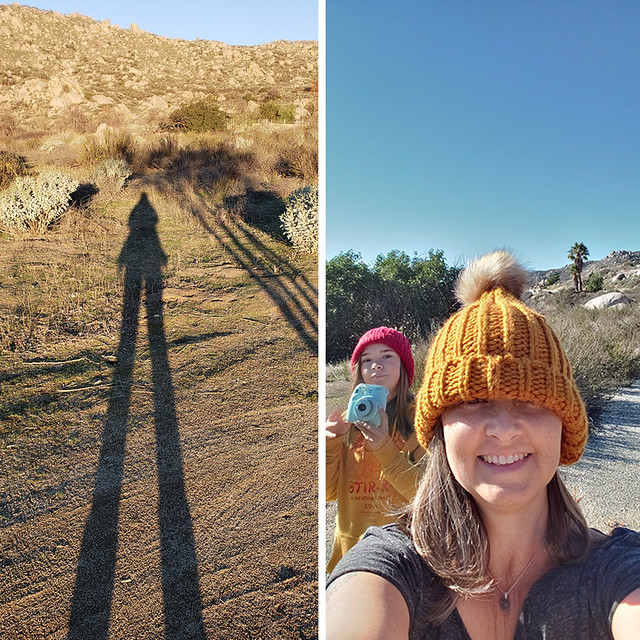 I’ve been singing the phrase “finding my aesthetic” to the tune of REM’s Losing My Religion for days. It’s silly. It’s just a funny thing that resonated with me. Let me explain.

A while back I was snooping through Bug’s secret “spam” instagram account (that I have reluctantly let her have like the overly-indulgent parent that I am) where she communicates with her friends and I came across one of her buddy’s accounts. It was a series of nine photos from a rainy day. Each photo was gray and minimalistic but completely beautiful and artfully taken. A vase of dead flowers on a windowsill. Raindrops on a windowpane with soft pastel foliage in the background, a cup of tea steaming… it was moody and amazing.  I couldn’t believe a twelve year-old captured them. And then on top of that the captions were even better.They were riddled with cuss words that I don’t want my kids saying at all but I had to admire their succinctness and the hilarious juxtaposition to the zen-like photos they accompanied. It was cute and brilliant. 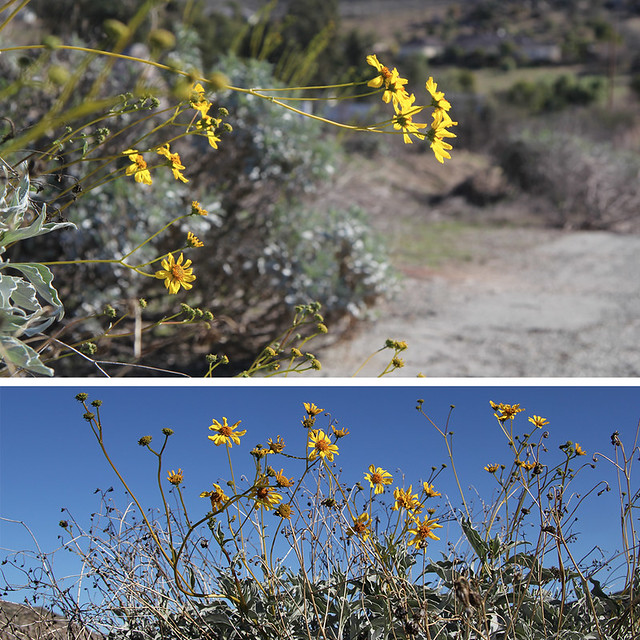 Of course I had to have a talk with Bug about her friend and how much they cuss. Done and done.

But I had to admit I admired her friend’s aesthetic. That’s a thing these days: aesthetics. They talk about their “aesthetic” all the time like it’s their personal brand and style guide. These kids use their instagram accounts like I used to sell graphic design to corporations. They have distinct styles and rules and they stick to them like they were launching a company. It’s kind of amazing.

The kids use their instagram accounts completely differently than I do. I take a ton of pictures and document my life. They use it as a personal portfolio to hold their place on the internet and share their brand with their friends or maybe even sponsors if they blow up and become influencers someday. They curate nine photos with a color scheme and mood and then delete those photos and replace them with new when they are ready to move on to the next theme. Instagram is more of a visual place holder to advertise who they are and then everything else is done through stories and instant messages. It’s funny and weird but probably pretty smart since the real meat of what they are doing on the internet is hard for a parent like me to track and control because it automatically disappears after 12 hours or so. Kids man. Always outsmarting their parents. 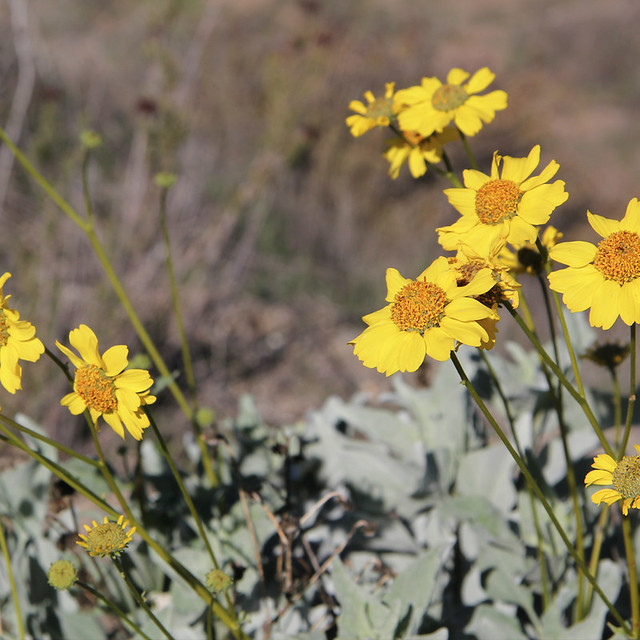 Anyway. I think there is a positive to every negative. I know there are a zillion things wrong with letting your kids have social media and I am fighting a war with mine. Believe me, I am in it and involved and fighting my head off.  If I could go back in time and take back my decision to give them phones I would. Phones are ruining our brains.

But on the other hand I am pretty impressed with their skills both creativity and socially. They adapt so quickly.  They create amazing things!  Will this someday help them in a world that is getting more and more virtual? I have no idea. What I do know is that I am impressed. More and more I am letting go of control and often I’m pleasantly surprised with their actions. They do remember the values I’ve tried to instill in them. They do use the internet with respect and draw boundaries where they should. Who knew! Kids aren’t always trying to be bad!! Not that I’m going to make great claims but I don’t want to judge too early either. 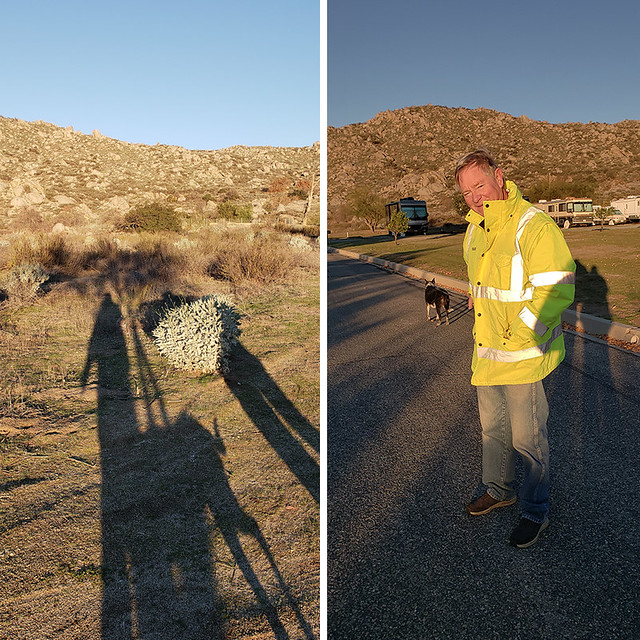 Anyway I’ve been singing “Finding my Aesthetic” and thinking about curating my nine photos. Of course I’m not going to do that fully because I don’t really care that much AND I like to take a million photos AND NOT delete them but it is fun to play around with. Since my background is in graphic design and art it’s something I’ve always done on some level anyway. It’s just been fun to talk about out loud with my kids and they don’t even laugh at me. 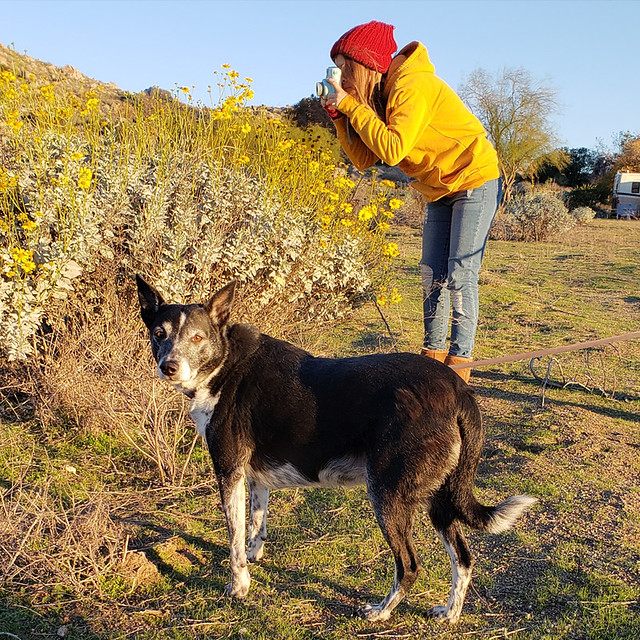 Bug has been wearing this gold sweatshirt for days (too many and not showering—ew!) and borrowing my old red knitted hat. Then I got a new gold knitted hat myself and I’ve been wearing this really old but warm red flannel quilted jacket. We visited my parents and went on a hike with my dad in the early morning hours and Bug and I joked about how our new *aesthetic* was gold and red. And it is! I love gold and red right now. Add in a little early morning blue sky and the graphic designer in me is jumping up and down for joy. 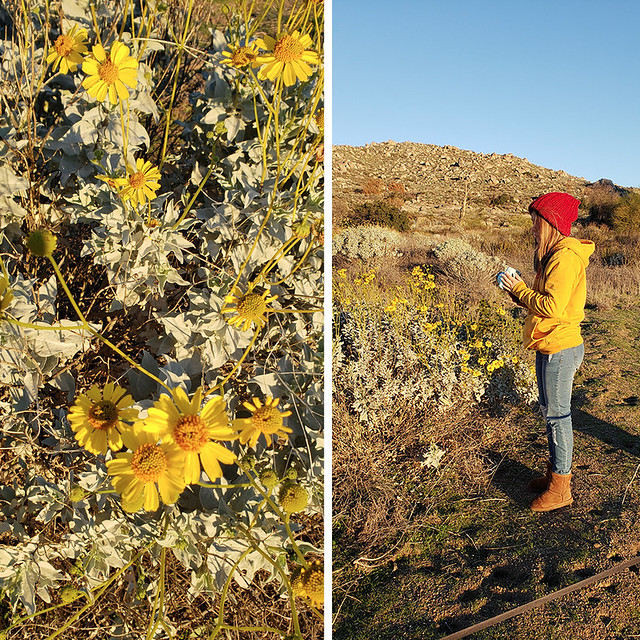 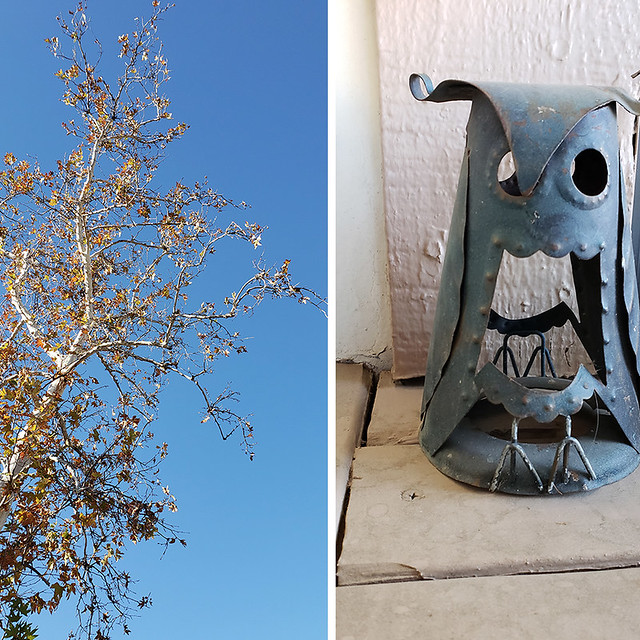 And of course you have your minor notes of blue and gray chiming in. I love this old owl lantern that my mom has had forever. I remember playing with it when I was a kid so it made me super happy to see it in their new home in the desert. Have I mentioned how much I love their new place? Yes, I have. It’s very much *my aesthetic* as the kids say. (insert eye-rolling here) 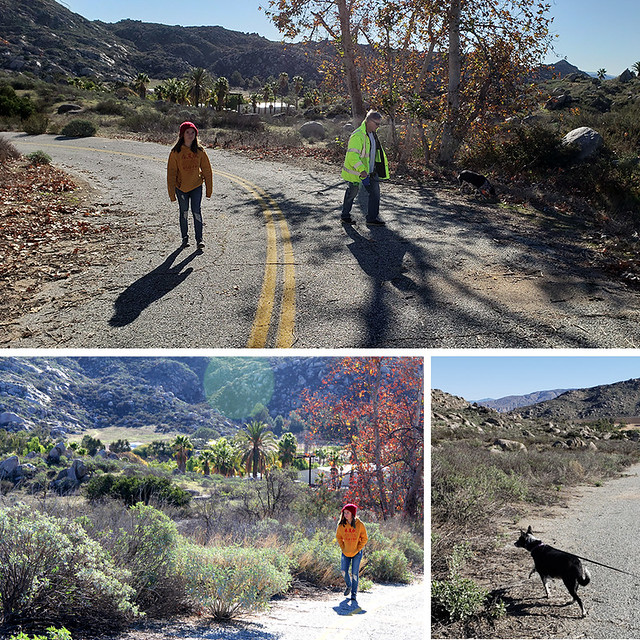 Bug and I had a great time hiking and taking pictures. I love that I have an artistic child who gets me. Sometimes I miss the crazy eccentric artistic-ness of my ex (that was something I really admired about him) but guess, what? It showed up in my kid! So that is really nice. And she doesn’t smoke or get grumpy when I chew too loudly so win, win! 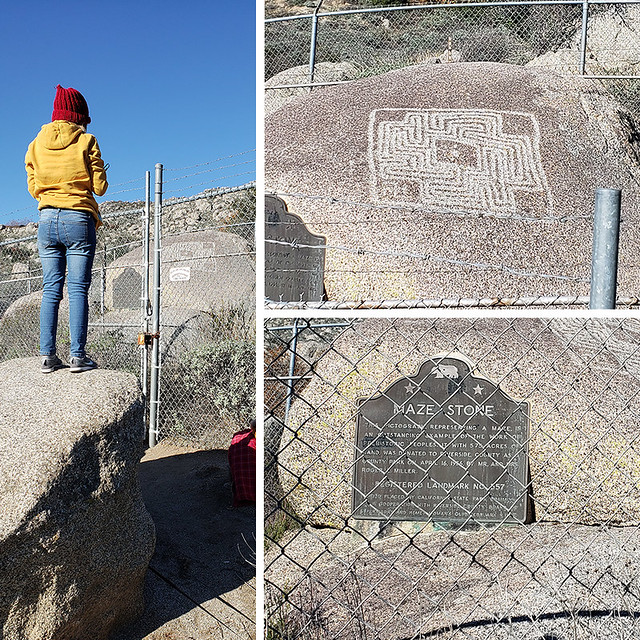 My dad took us to see the maze stone that is nearby his house. It’s a landmark protected by the state. It’s this really cool maze carved into rock by the Native Americans who used to live there. Sadly, because people are idiots and like to spray paint rocks it has to be protected with a bunch of ugly fences. 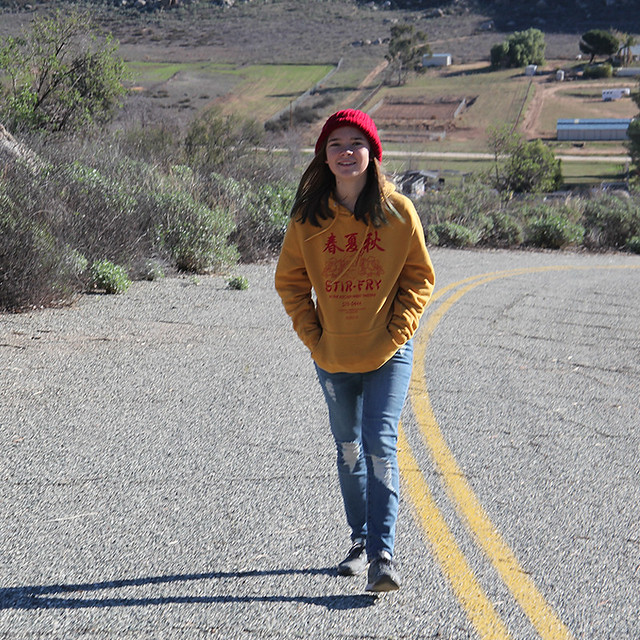 But it was definitely worth the hike in the early morning air. I love that there are still places to explore.

I’ve explored my own neighborhood to exhaustion and I’m starting to get bored of it. Lately, I haven’t been able to take the dogs on walks on the nature trail by my house because Whiskey is allergic to something on the path (Wheatens are allergic to everything). He keeps licking his paws until they are infected and it’s become a very expensive problem. So we’ve had to stay inside and it’s the pits. When he gets better we’ll be able to walk again but we might have to stay away from the nature trail. And invest in some fragrance-free baby wipes to clean his feet after every walk. Note to self: never get a Wheaten again. They are so so so loveable but high high high maintenance! 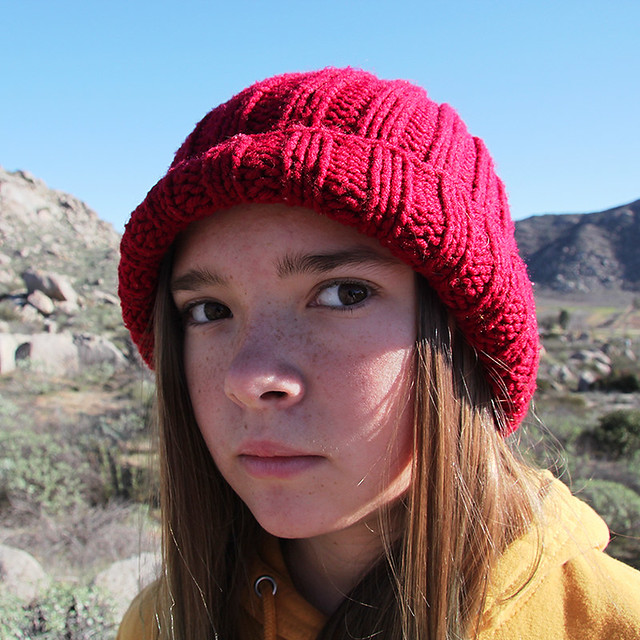 But back to my kid. That’s her hat now. She’s stealing more and more of my clothes lately which I take as a compliment.  She looks pretty good in gold and red. I guess she can stay in my nine curated photos. Just kidding! I’m not kicking anybody out of my instagram feed if they don’t match. 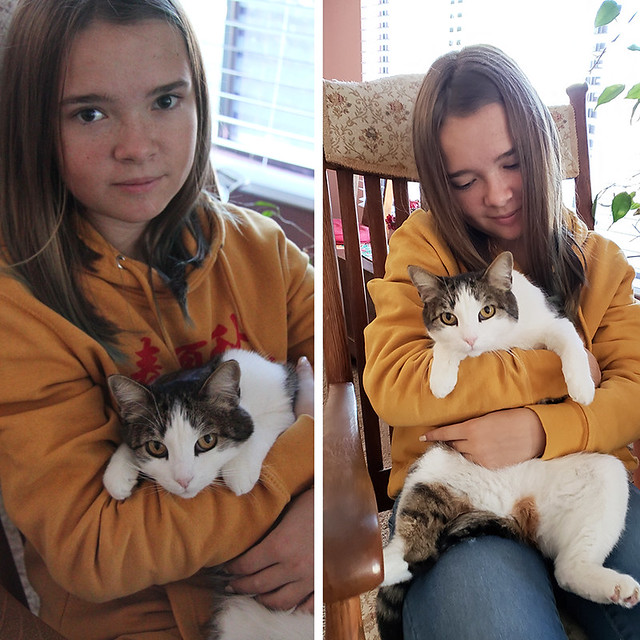 But I’ll definitely take more photos of you if you do!