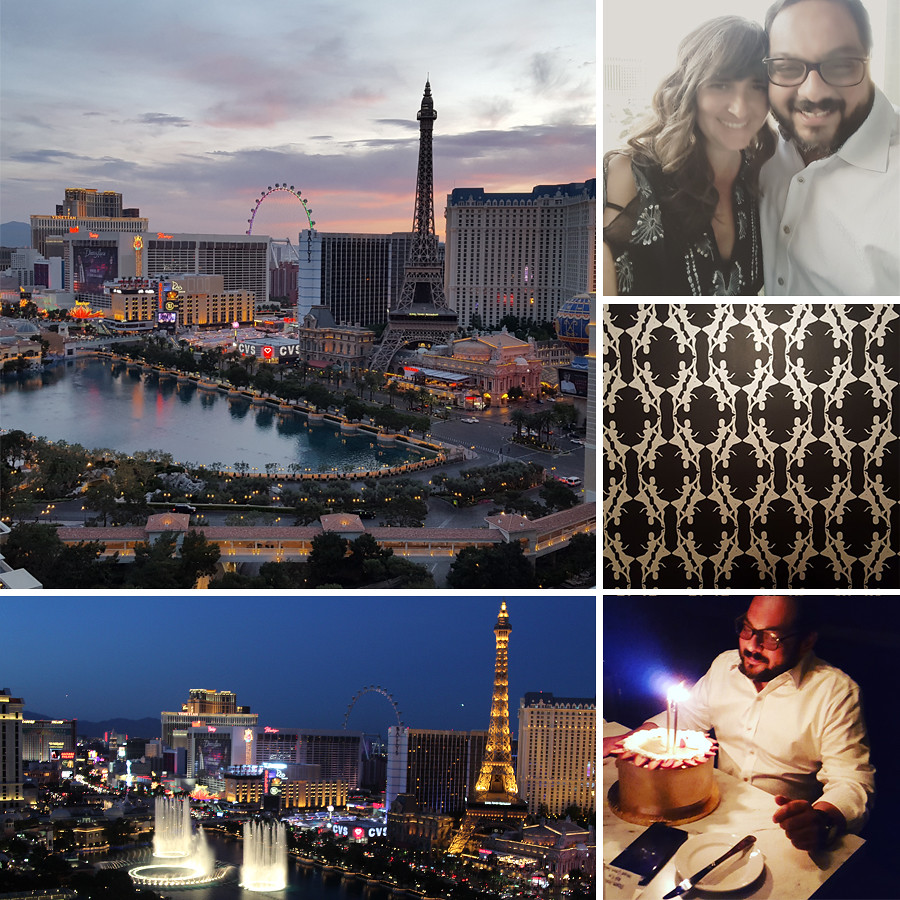 I survived Vegas and I had a great time! Who knew?! I might even hate it less than I used to, which is amazing because you know how I feel about Sin City and gambling and nightlife that doesn’t quit…it just makes my  head hurt. But not anymore!

Payam’s Birthday Bash was everything we hoped it would be and more. It was really, really fun. Mostly because the company we were with would be fun anywhere (and I mean anywhere) and because The Cosmopolitan is an amazing hotel that I could probably live in and never leave.

The view! Our travel agent hooked us up big time. If anybody is thinking of going to Las Vegas email me for her info. We had a balcony on the 26th floor over-looking the Bellagio fountains and I could sit out there for hours watching the light change and the fountains play. It was so pretty and peaceful to be in the middle of all the hubbub but to be above it, just watching all the twinkling lights. I really enjoyed it. 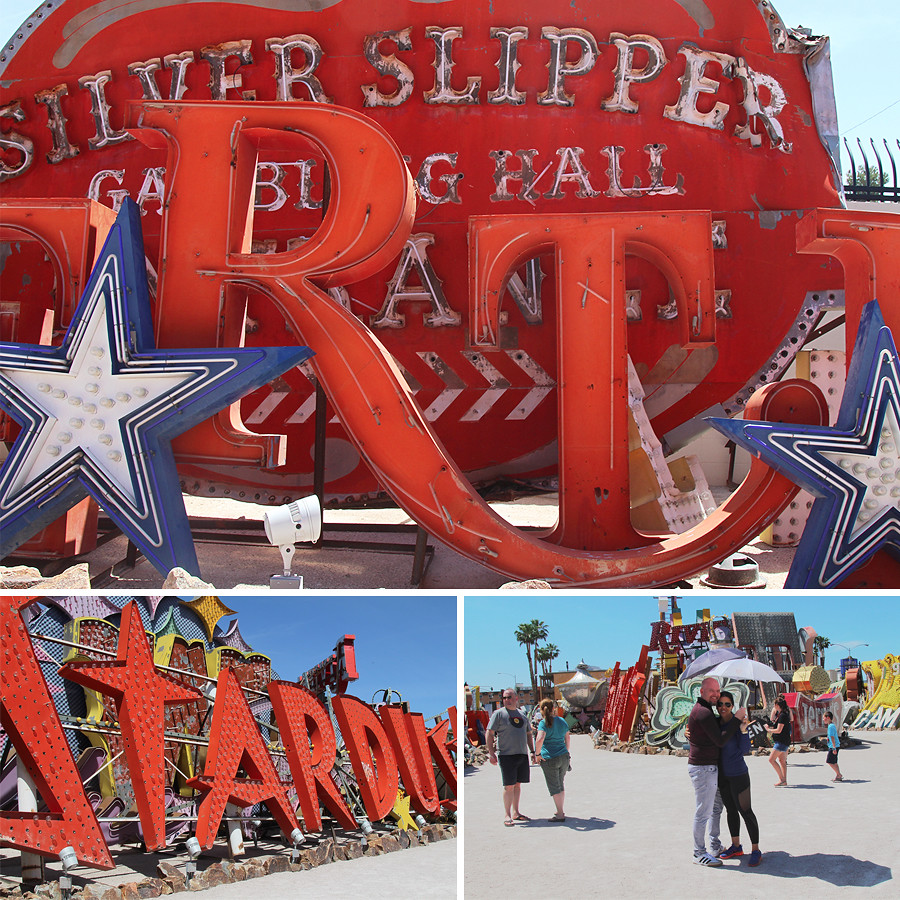 I also really enjoyed The Neon Museum but I have to admit I may have gotten my hopes up a little too high. It fell short of my expectations. Mostly, because we had tickets for the middle of the day and the sun was beating down so hard on the white gravel that my eyes hurt. It was SO BRIGHT!! I never wear sunglasses and I really wished I would have. While I was bugging out about all the cool colors and fonts (stuff graphic designer dreams are made of!), I was also squinting and holding my hands over my eyes because I felt like a headache might come on.

Secondly, the actual lot that houses their collection of neon signs is small.  Really small. There are lots of signs all stacked on top of each other so there is a lot to look at but I thought we’d wander around an acre, maybe a warehouse or two like the parade float museum in New Orleans. It was barely the size of a small block. They also make you take a guided tour which means you’re stuck in a group trying to lean this way and that to take a photo so that the lady’s umbrella in front of you isn’t blocking your frame. 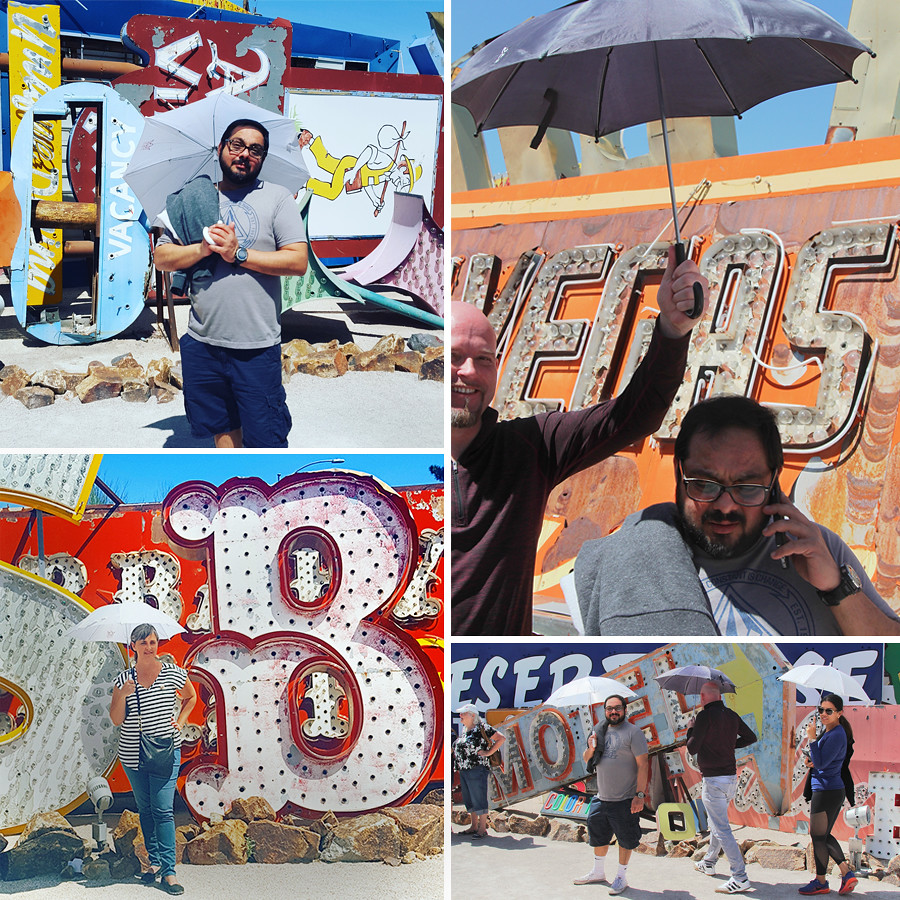 We got a lot of umbrella shots. It’s actually really nice that they provided umbrellas though because it was hot in the sun!

I did like listening to the guided tour. Who doesn’t love a good old Vegas gangster story? But I also like to be able to wander independently so that was kind of a drag that we were tethered to our guide who rambled on and on. I would definitely recommend taking this tour during the morning hours or even better, sweet time (sunset) when everything would be glowing with golden light. The one good thing about our middle of the day tour was that the sky was super blue. So bright! So blue! 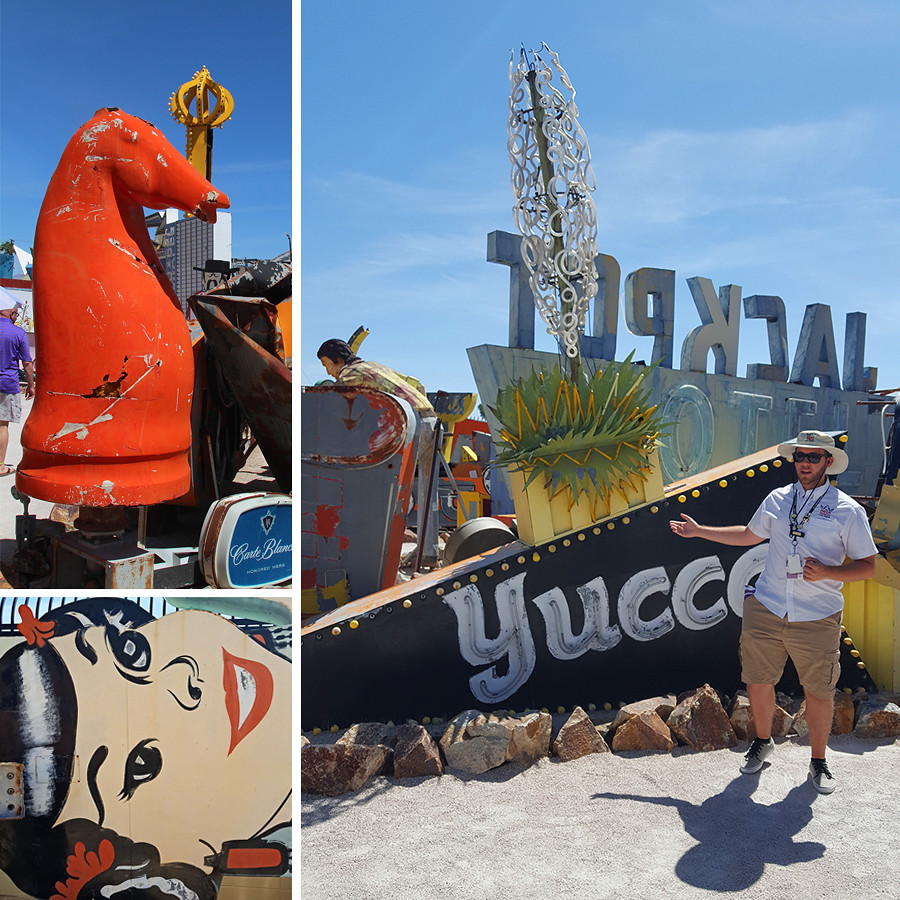 So graphic! It was a lot to take in. We were glad to be done with the brightness and heading back to our oasis of a hotel afterwards. 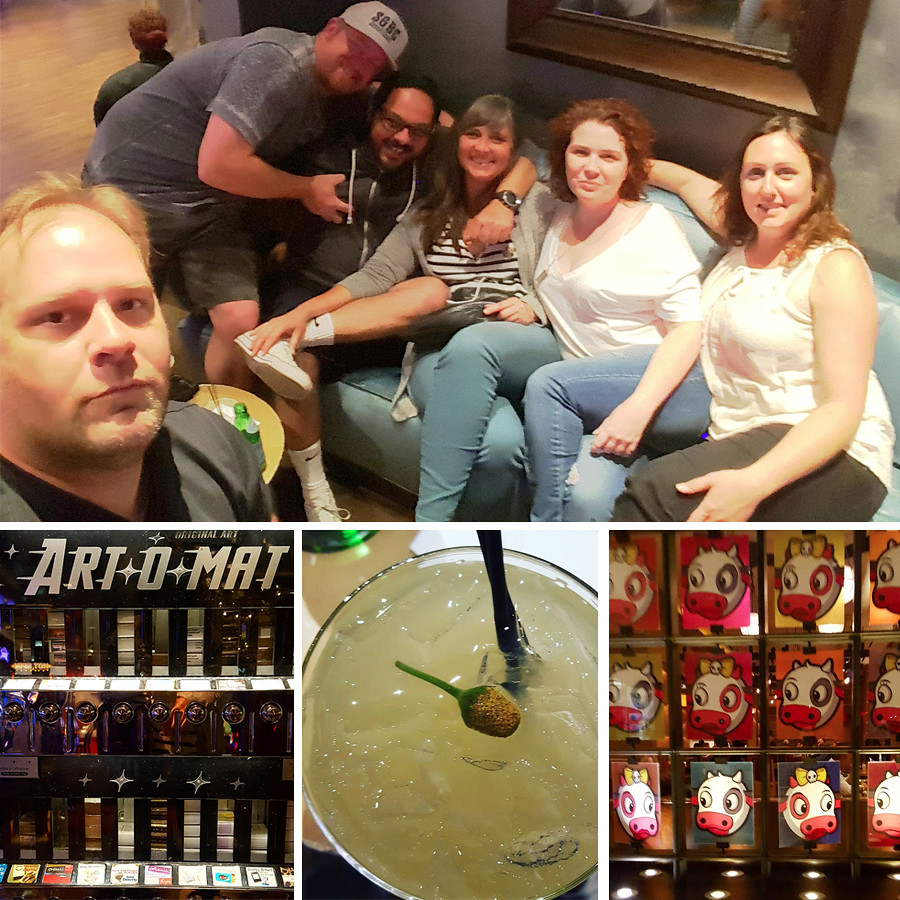 Which, let me tell you, is an oasis! I loved the Chandelier bar in the middle of the hotel. Sadly, I didn’t take any photos of the long sweeping pink beads that hang and drape from the ceiling and down two floors to create this massive illusion of a giant chandelier but you can see them on their website. It was so pretty! I loved the light blue satin couches that you could lounge on behind the bar and nobody really cared if you were drinking or just hanging out. We hung out there quite a bit.

We also tried their Buzz Button drink that is on their secret menu. Yes, remember this and order it if you are ever there because it was A TRIP! It’s this little flower bud (acmella oleracea, common name: toothache plant) that when you chew it, it creates this really strong tingling, cooling sensation in your mouth that is enhanced by the citrus in your drink. I was a little scared to try it at first, thinking they were serving me acid or something off their “secret” menu but it’s not hallucinogenic or anything like that and it only lasts for a minute or so.  It’s a fun surprise for your mouth! You might even want to try it and kiss someone like certain members of our group who decided to do that while the rest of us wolf-whistled and lost our minds laughing. It was a crazy bunch. 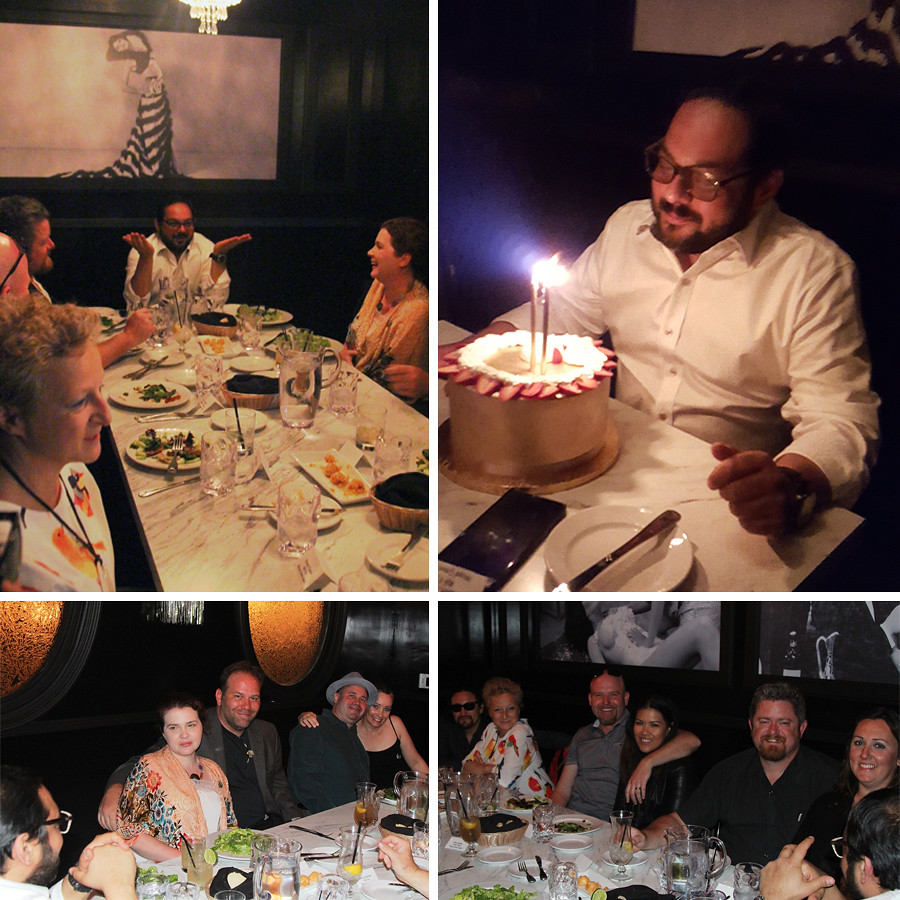 We threw a little party in our hotel room suite the first night (enjoying the view on the balcony mightily) and then the second night we went off the strip to The Artisan for a private dinner. I have so many mixed feelings about The Artisan. It was a good find but lacked in some areas.

The Artisan is a really really funky, dark, gothic, vampiric boutique hotel that looks like it really goes off after hours. Unfortunately, our dinner party was before those going off hours. In the normal light of day, without the writhing, dancing bodies and bumping beats from the deejay, it was a little worse for wear.

The bar itself was awesome. They have art and mirrors on the ceiling and the whole room looks like something funky is going to happen, maybe a haunting, maybe a party? Who knows!  Our private dining room on the other hand was sad. I was so disappointed. It was pathetic.

It was a small back room with a fake marble plastic table in the middle. When I first walked in, the fluorescent chandelier lights were on full blast and it looked rinky-dink and cheap. Plastic glasses, no table cloth, our names printed on cards with Times Roman. I was so sad. This is what you get when you organize events remotely. I immediately dimmed the lights and that made it about a thousand times better.

The food was sad too. Frozen mushy vegetables out of a bag?! Thankfully, the rib eye was tasty and so were the mashed potatoes (and I hear the lamb and shrimp were good too) and more importantly our guests were off-the-hook fun so nobody but me really seemed to care about the food. Too bad I’m a micro-managing party planner and these things really bum me out. 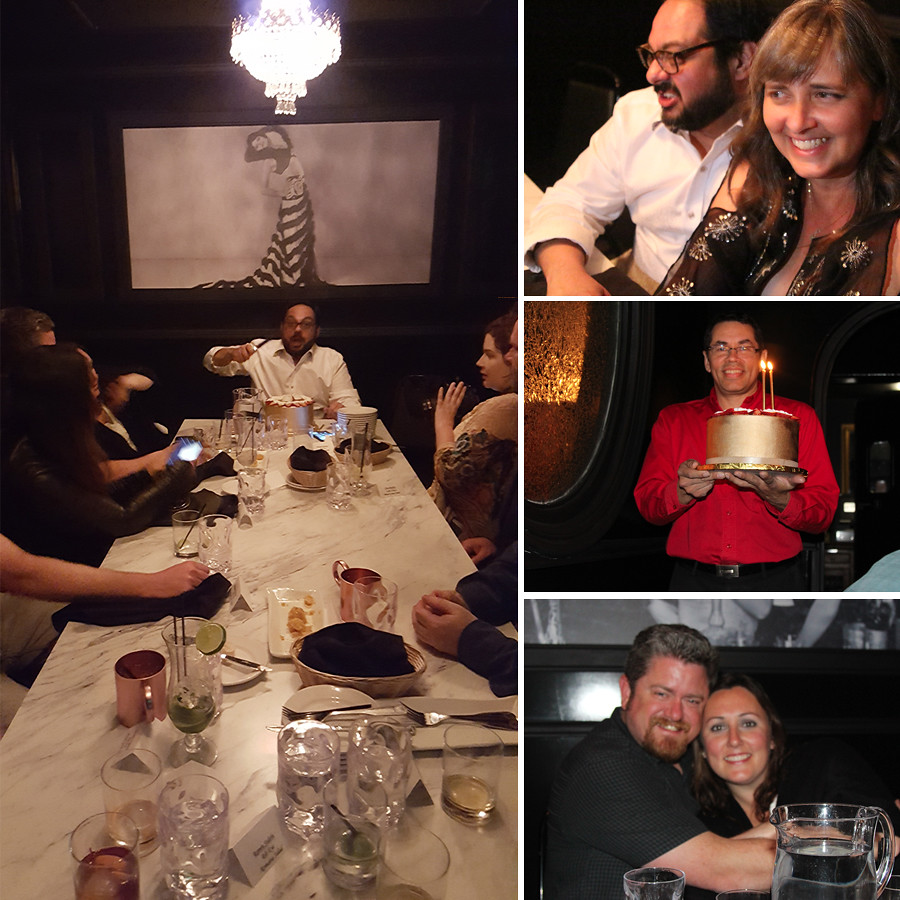 We made the best of it. We laughed the night away with all the usual shenanigans. Payam has a raucous group of friends who always make my sides hurt from laughing so hard. My smile muscles ached worse than usual that night and I got over the lousy food eventually. We sang happy birthday, ate cake, toasted the birthday boy and all and all had a pretty great time. 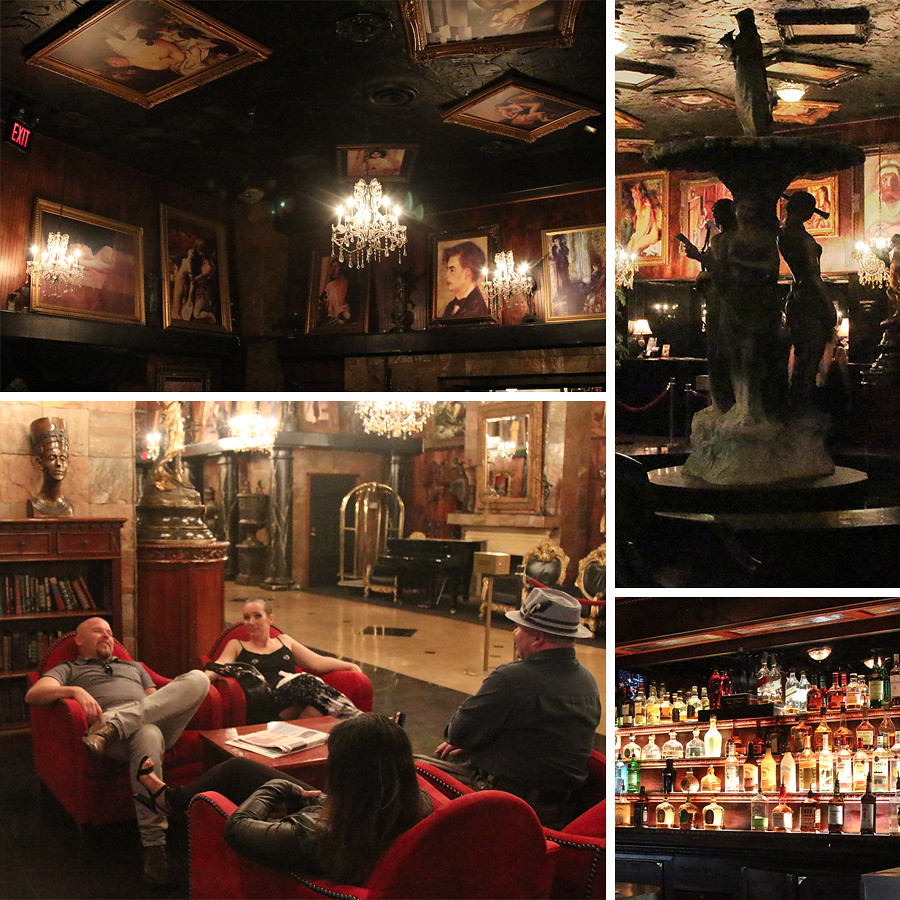 Here are some of us lounging in the bar. You get the idea. Very funky. I don’t know if I’d recommend staying here overnight but if you are a vampire you might like getting your groove on. There was this one couch that was so old and dilapidated you immediately sunk to your ankles as soon as you sat down on it. And then you were stuck wriggling like a bug trying to get your butt up out of it. We had a lot of fun pranking our unknowing guests as they arrived one by one with that one. 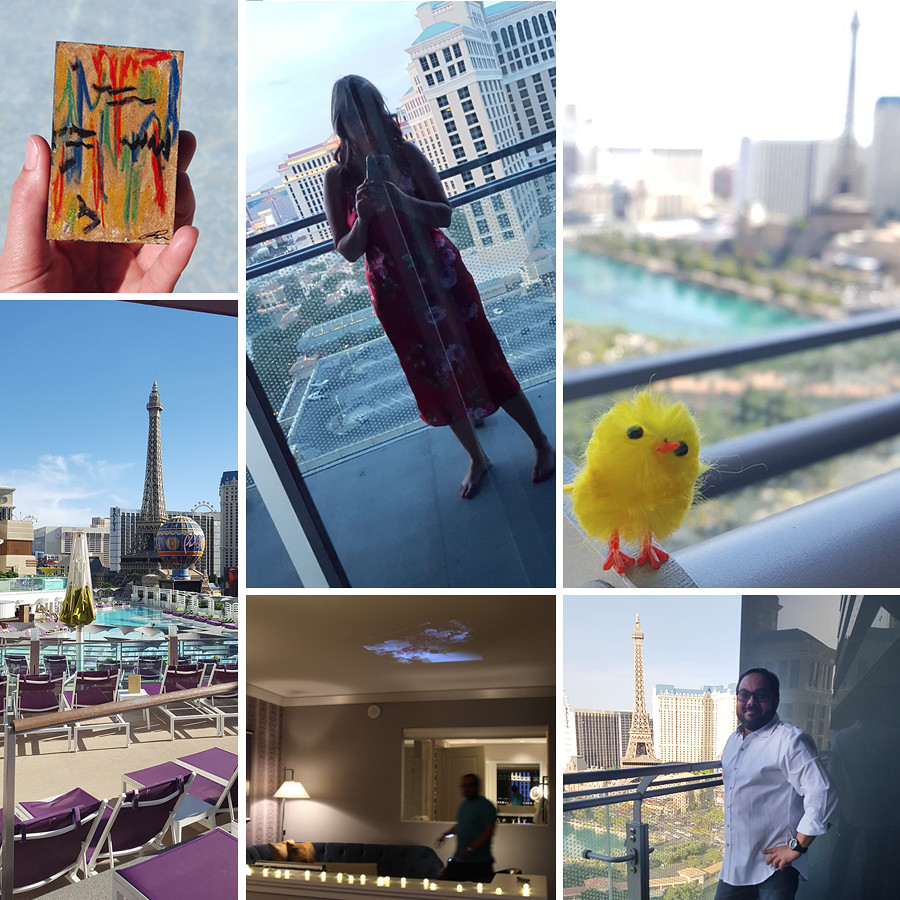 Then back to our hotel for a little gambling (for Payam), a little drinking (for Payam) and a little sleep (for me!) so we could get our butts back home in the morning! Nothing like a whirlwind Vegas trip to make you appreciate your regular boring old life. Which by the way included a ton of traffic on the drive home. Next time we HAVE to leave earlier because that drive home was the pits. Hours and hours of standstill traffic.

Good thing I can pretty much block that drive home out with all these other good memories!

3 Comments → What happens in Vegas…