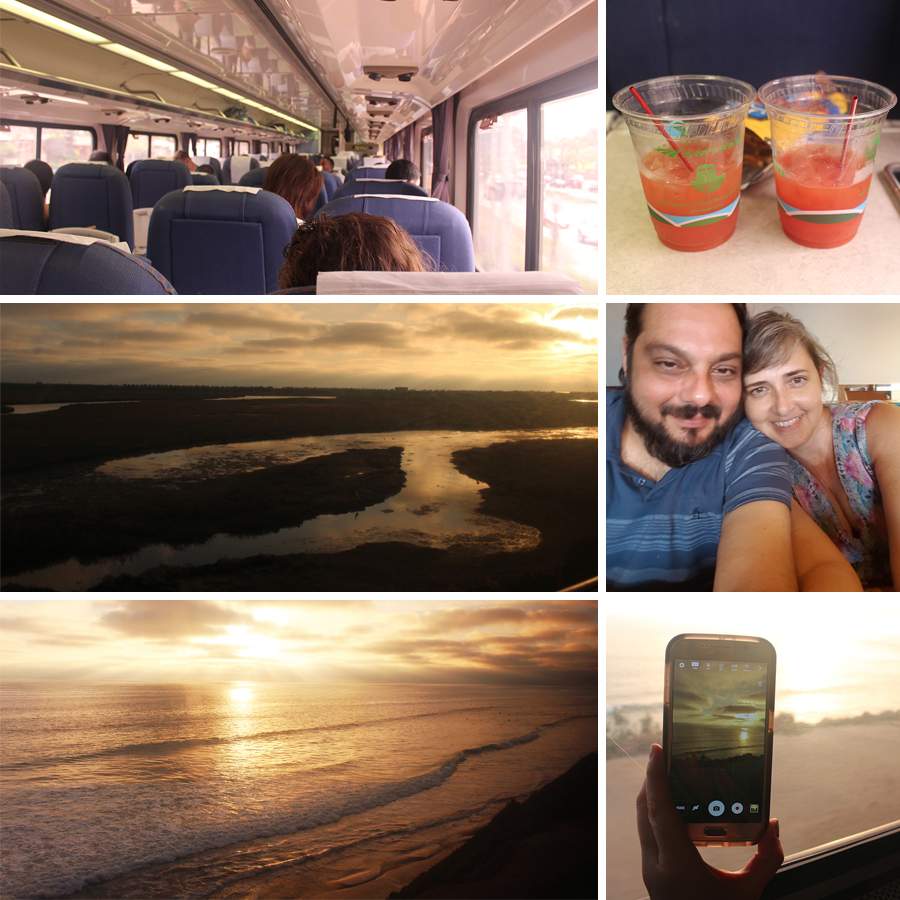 Payam surprised me with a train trip to Old Town San Diego this last three day weekend. It was super great timing too because I was having one of those days where I miss my kid (it was her Dad’s week) and I feel out of sorts because I know I should be doing something important with my free time (like work maybe or start some big project) but I’m sitting on the couch procrastinating instead. I hate weekends like that.

I had no idea that Amtrak (specifically the Pacific Surfliner line) was so awesome! It was the most peaceful, calm, beautiful ride along the coast, ever. The BEST views of the ocean I’ve ever seen. I’ve driven this route many times on the highway and gotten glimpses but nothing like what you can see from the train. In many places the surf actually hits the rocks that the rails are on. From now on if anyone comes to town to visit I am taking them on this train. It really is the best way to capture the essence of Southern California.

Of course the company I had influenced my opinion a lot. I’m sure if I was stuck on the train with a bunch of sweaty, race track drunks or somebody grumpy griping in my ear the whole ride I probably would be reporting a whole different experience but I had Payam, who graciously bought me a bloody mary and some pretzels from the snack car (I’m proclaiming that all train rides from now on require such!) and it was just the best. 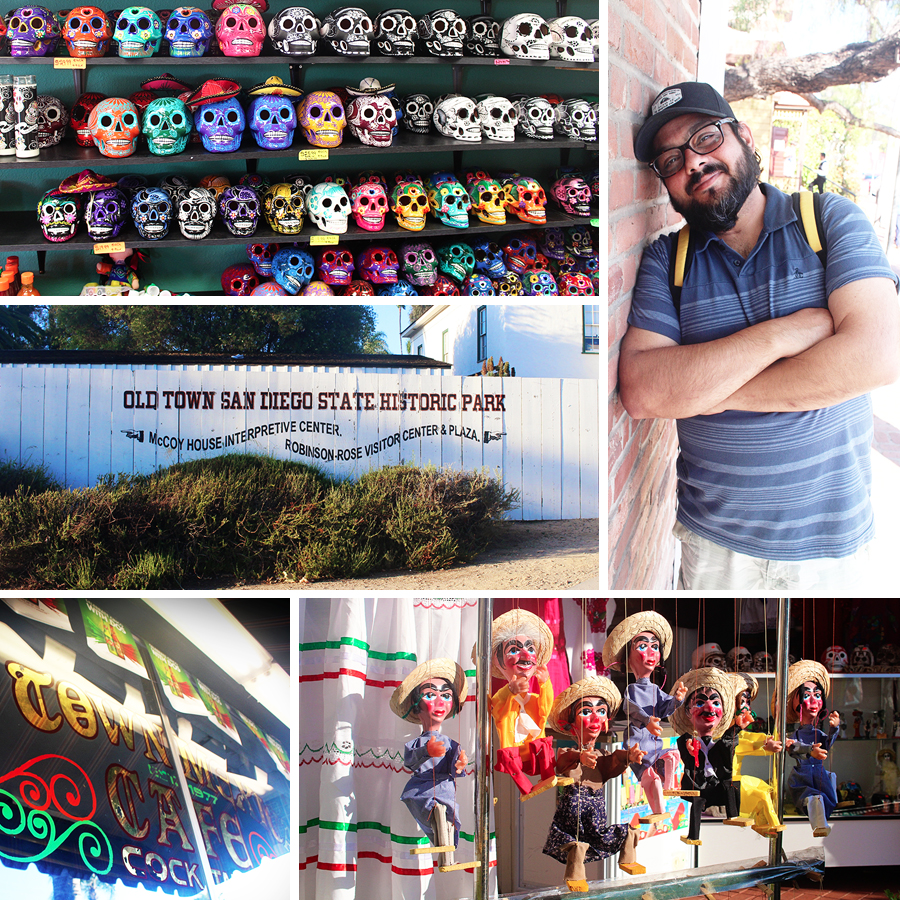 I’ve been to Old Town a lot with Bethany but never before with Payam. It was fun to show him our old haunts–which of course made me miss Bug even more but Payam and I made a promise to each other that we will definitely do the whole trip all over again with the girls because they would love it.

We were starving by the time we got there so we had a huge lunch and then we walked off all the zillions of calories looking at all the little shops and museums. 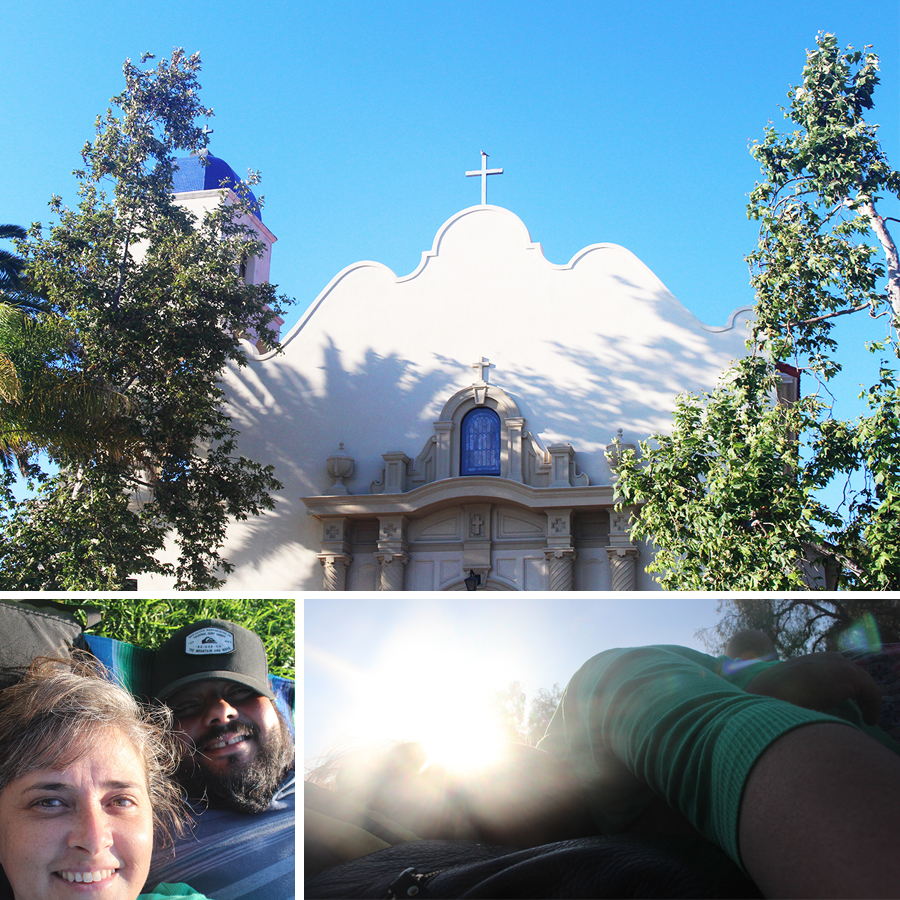 We even took a little rest in the park on a picnic blanket because that’s what you do when you are out and about and kidless! It was really nice. 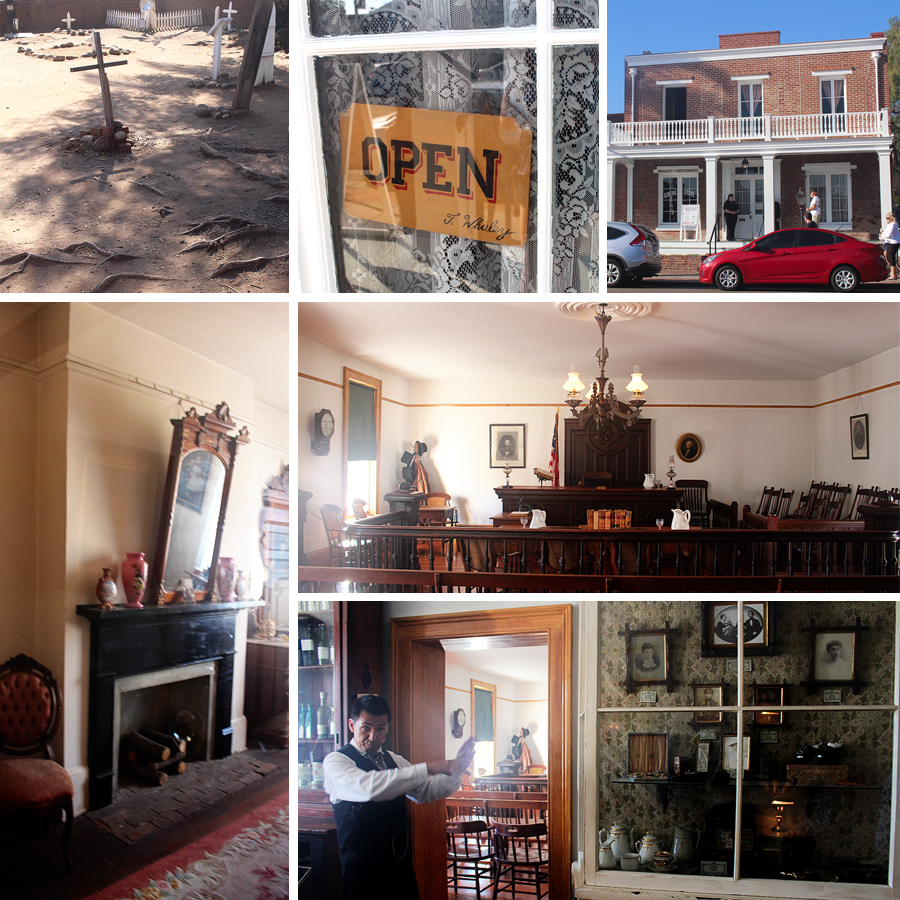 We did spring for the Whaley House tour and what a huge disappointment that was. Not that I’m keen on seeing any paranormal activity or anything. That’s not my thing but I was hoping for at least an interesting tour of old town lore. Nope.  We were instead bored to tears by the worst story-telling tour guide ever. The poor guy. I don’t know what his problem was but he couldn’t remember anything in a straight line and he kept repeating himself over and over. He really wanted us to see orbs of light in our cameras (which I’m sure is cool) but I didn’t see anything. I wish they would have hired someone who could have memorized a script because I’m sure this house is filled with amazing stories. In fact, I know it is!  Five people died horrible, painful deaths in this house and an archway in the living room is built on the exact spot where gallows used to stand but our tour guide choked through the history so badly it was painful. I couldn’t even bring myself to ask leading questions because I knew he’d take forever to answer anything. Good thing it didn’t cost that much or I would have asked for my money back.

But whatever! We bit our tongues and tried not to yawn too much. And then back on the train again for the best tour around: SUNSET! 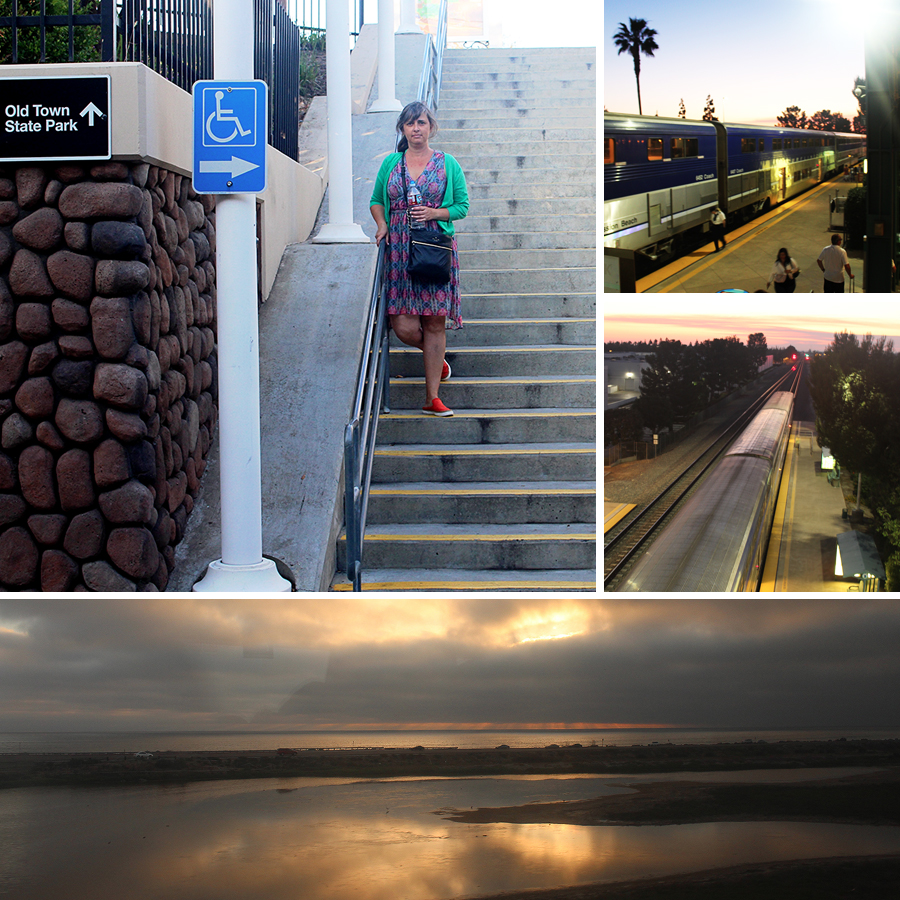 I thought I better include a picture of me looking old and tired because I am getting old! I don’t need to be fooling anyone. Now and then I find myself looking for a link in my archives and dang, I started this blog when I was so young!  Forty-four is coming up next month! It’s hard to believe I’ve been blogging for like 13 years or something.

I just bought tickets for Alt Summit in Palm Springs (Are you going?!! If so, email me!) and I had to fill in all my social media handles and how many years I’ve blogging and even though I’m a nobody now, I realized that I’m not a nobody because I’ve been doing this forever! Sometimes I fall into the trap of feeling jealous of millennials who have zillions of followers and really cool sponsors and how they always take the coolest pictures of themselves looking skinny and hip but that was me back then too and you know what? This is what being a forty-something blogger looks like. It’s not that bad! We barely write anymore but we’re still kicking around. We take fun road trips with our stable-relationship partners (gasp!) and it’s pretty awesome. So I’m not so jealous anymore. I’ll stop trying to hide my age. It’s all part of the journey and when I’m sixty I’ll be looking back on these posts wistfully. 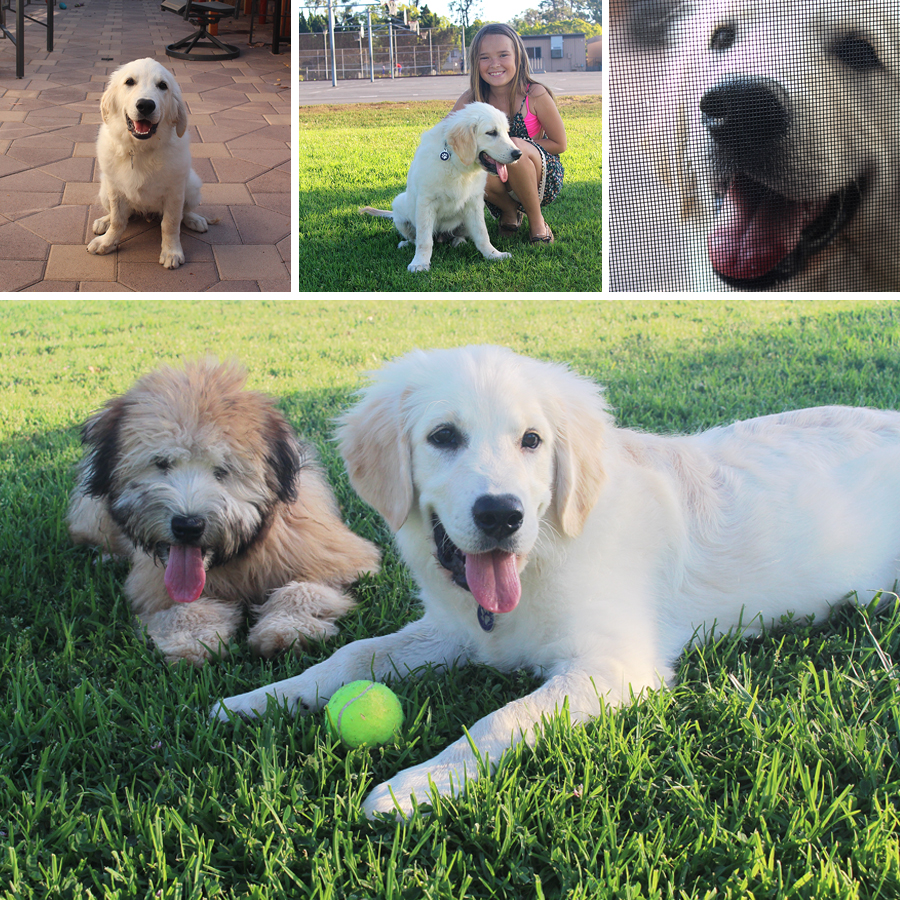 I can’t end this post without at least a little puppy update, right?! Look at these guys! Five months old and they have doubled in size. Cody is losing all his puppy fluff and now he has a four-inch river of wire-y hair running down his back in it’s place. He is so long and strong! When he pulls me on his leash it’s all I can do to hold on and stay up-right. Training him has been challenging because even though he is the sweetest dog ever and he really wants to please his masters, he does have a stubborn streak. Meaning: if he doesn’t want to walk, he likes to plant himself down in the nice shade and he won’t budge for a good minute or two. I used to pull and scold but I’ve learned that he just needs a minute now and then. He gets hot easily and needs rest. But I have no idea how he is going to handle summer because it’s barely hot now and August is going to be a killer.

Whiskey, on the other hand, is a sweet little bugger.  He has the best personality. He is very affectionate and will do the cutest things but he also loves to play games and instigate mischief. We take them for walks constantly (up to six miles a day now!) and just when you think you’ve finally tired him out, he’ll get a wild hair up his butt and race around the house like he’s possessed. It’s comical when it’s not maddening. But we love him and his crazy witching-hour personality. Not sending them back, nope. They are so much a part of our life now. Our crazy, crazy life.