posted in domesticity, Family Matters on September 10, 2015 by SAJ 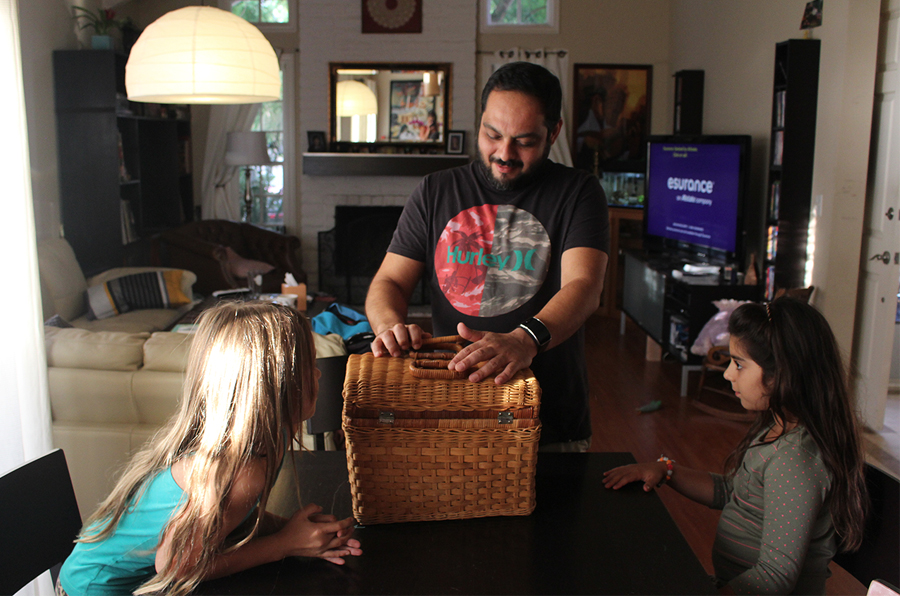 We watch a lot of cooking shows in our house. Why? Because the grown-ups are tired of Sponge Bob and cooking shows are usually accepted by the kids. The food network channel doesn’t usually show nightmare-inducing commercials for horror movies that are coming to theaters near you and we like to cook so it’s a good meeting ground for everyone.

One of our favorite show is Chopped. (We also love Cut Throat Kitchen and Camp Cut Throat Kitchen. Who doesn’t love Alton Brown?)  Even the kids love these shows and it’s turned into a family affair. We watch nearly everyday. (Yes, this is something new to me: living in a house where the television is on all the time in the background but that’s another blog for another time.)

We decided to have a little Chopped Kitchen Challenge of our own. It works like this: You get a basket of mystery ingredients, usually four or five items. They can be anything. The weirder, the better. The chef doesn’t get to see what’s in the basket until the challenge starts and then they have thirty minutes to cook something delicious.

Judging is based on presentation, taste and creativity. You can imagine the shenanigans that can go on. There is always lots of hurrying, sometimes people cut their fingers and then there is all kinds of drama involved when the judges judge because somebody has to go home (it is reality tv, after all). 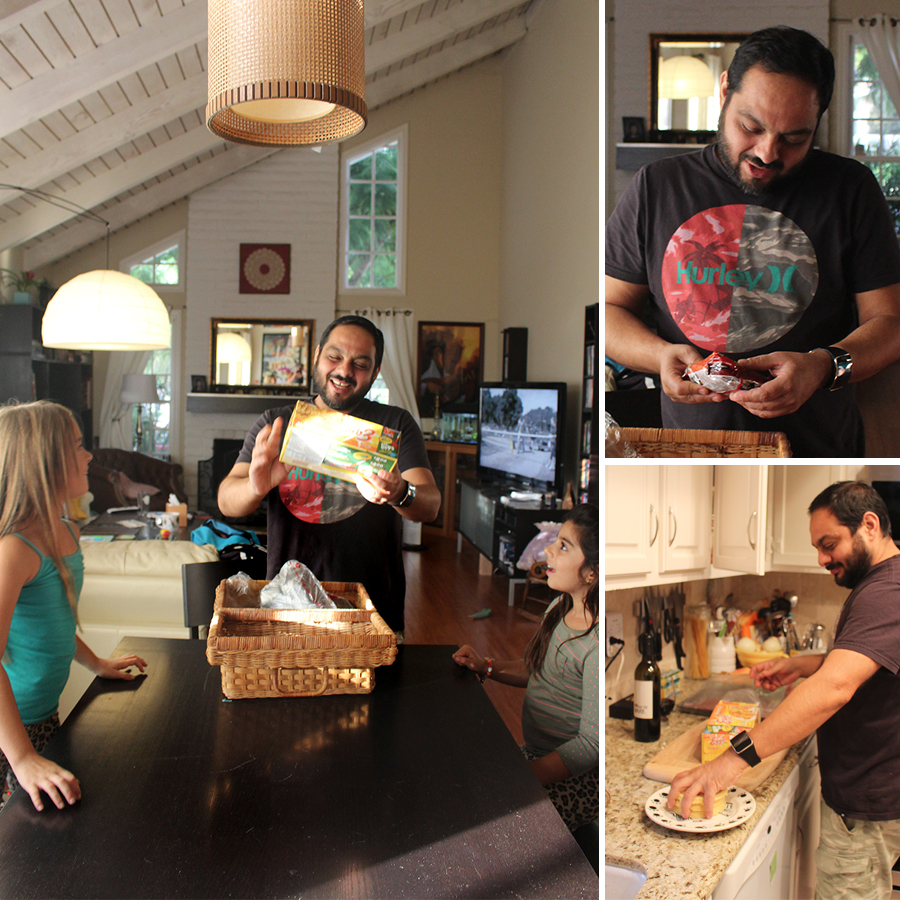 How did our home version go? Well, we did’t have more than one chef because that would be crazy-town in our small kitchen. You really need two stoves and two prep stations to compete.  We had mystery ingredients and we had judges. Oh did we have judges.

The kids are judges every damn day when it comes to food so that was a natural fit.  We upped the time from 30 minutes to an hour because we are not real chefs (yet). Payam and I flipped a coin to see who got to be the chef first and who got to pick the mystery ingredients. I got shopping and Payam got chef.

I took the girls shopping with me and we decided, collectively (!), to give Payam the following ingredients:

Shopping with the girls is an adventure in itself even when we aren’t creating a chopped challenge. Nobody agrees on anything and they are a couple of the pickiest eaters on the planet. I take that back. They are eight and nine and have typical eight and nine-year-old palettes. Bug only likes hamburgers and steak, especially from a restaurant and not cooked by me. Joon doesn’t like meat at all. Joon could exist off of cheese alone and Bug doesn’t like anything gooey, especially cheese.  They both love toaster waffles (and any kind of junk food) and broccoli (score!). The package of spring onion soup and pomegranate juice were items that they didn’t have much of an opinion about so they went in the basket. They had strong opinions about every other item that did or did not go into the basket. Many, many, many strong opinions.

I would have had an all-out blast picking mystery items if it weren’t for my personal peanut gallery piping in on anything and everything. We live in an area that is populated heavily with Middle Easterners and Asians. We also have a pretty big Jewish community. Even normal regular grocery stores around here carry a huge selection of international items.  Canned rombutans? Rice noodles in any shape imaginable, carbonated yogurt drinks, fish eyeballs, pigs feet, pickled anything, spices from every corner of the earth…I could go on and on. Payam actually made out with some pretty tame ingredients. 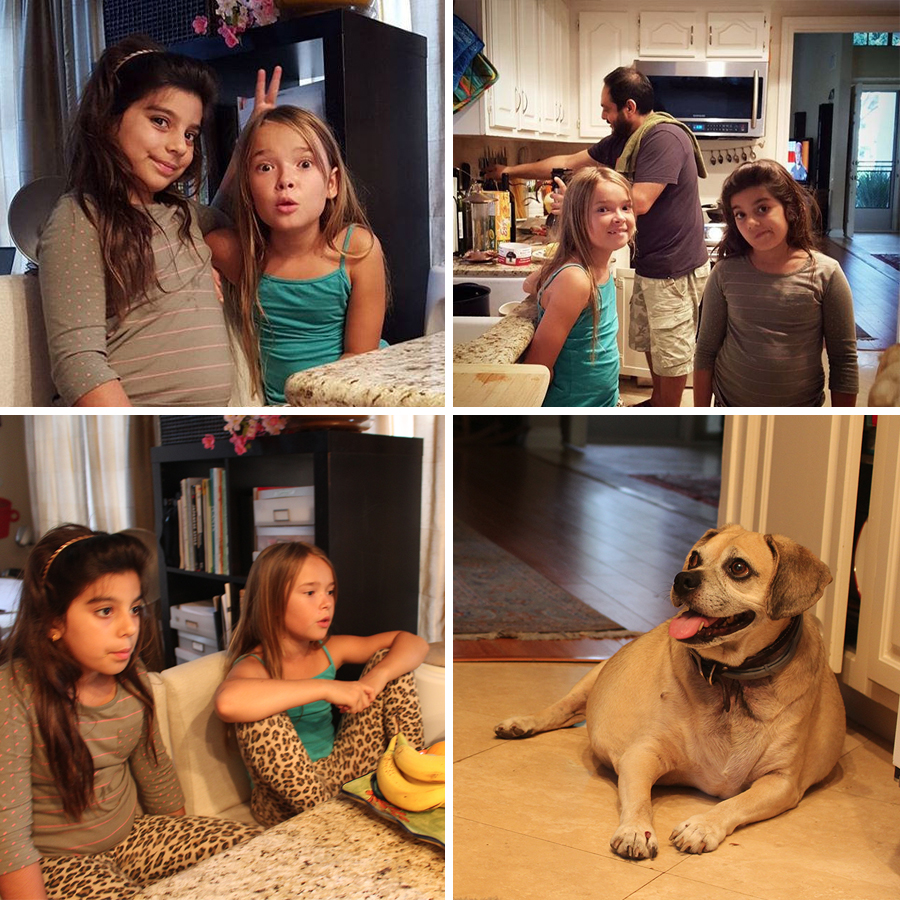 He opened the box, we had a few laughs at the strangeness of everything and then he got to cooking. The judges took their places. It was a great family bonding activity. Even the dog got in on the action.

Who am I kidding? The dog is ALWAYS in on any kitchen activity that might be going down. 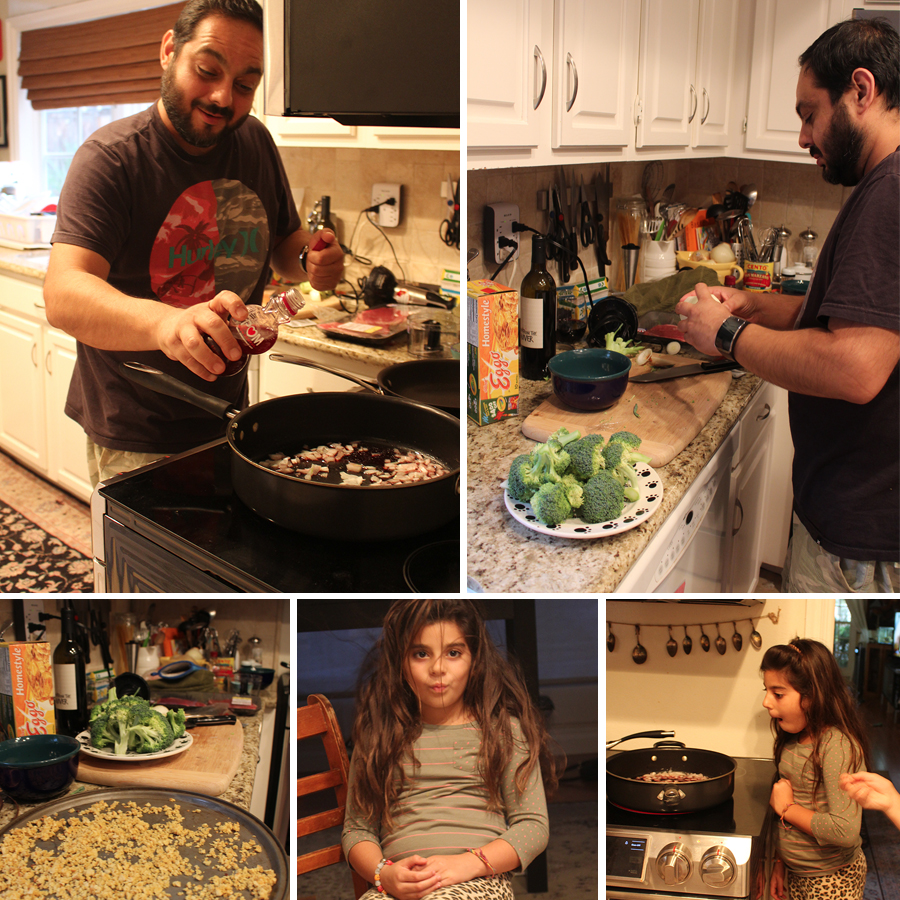 Both Payam and I are average cooks. We’re not super chefs or real foodies.We’ve pretty much taught ourselves everything we know. I’ve struggled with my cooking over the years but more so from a lack of an appreciative audience than for lack of trying. It’s been really fun to cook with Payam. We love to cook together. The kids don’t usually join us in the kitchen but the chopped challenge brought everyone together. They sat at the bar and critiqued every move. I photographed.

I should really have Payam write this paragraph because I don’t know all the things he did (it was a flurry of activity) but here is what I remember:

He blended the dry rice noodles up in a food processor. Then he made kind of a buttery risotto with the rice noodles (now bits) and their spice package.  He toasted the waffles, ground them up in the food processor too and then re-toasted the crumbs in the oven. There was some reduction of the pomegranite juice with onions and wine. The broccoli got steamed in that. The rice noodles became a yummy risotto and the waffles got rehydrated with pomegranite reduction and became a kind of delicious mush. He then pan-seared the steak with the pomegranate reduction and then plated everything, topping it all with a little more pomegranate onion reduction.

The result? DELICIOUS!! I loved everything. It was all so tasty. Bug loved everything too but gave low scores on presentation. (She’s particular about color, of course.)  Joon was not a fan of anything and would have rather ordered pizza.

All in all, it was really really fun. Especially for entertainment value. And at the end of the night we had dinner taken care of! It was like make-your-own dinner theatre.

Next week, when the girls are back with us (We both have 50/50 custody and recently Toby has started taking Bug every other week), it’s going to be my turn to cook.