posted in Bad Mom, BIG news, Bug, Family Matters, I have the best boyfriend, instagram, Life Lessons, spilling my guts on May 12, 2015 by SAJ 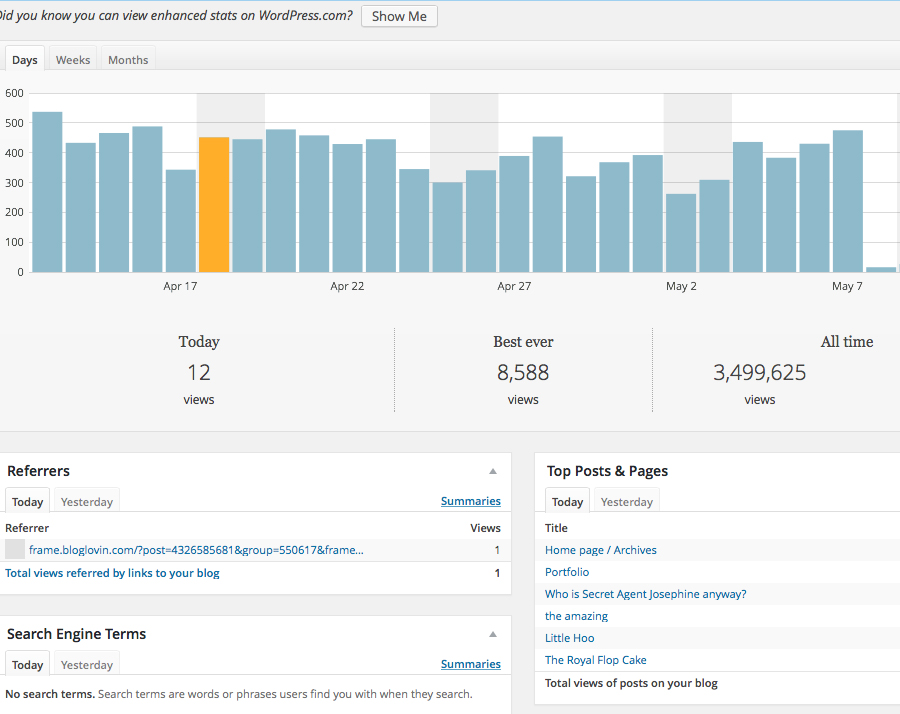 I logged into my wordpress account today and was shocked to see I only had one reader.  Stats don’t really matter anymore since I don’t have ads on this page and I never blog anymore anyway but I have to admit it took me and my ego a minute to digest. Really? Only one reader has clicked on this site today? What about all those google searches for ninja costumes and painted butterfly wings or chore charting printables? Where did those people go? Surely Pinterest sent over one or two people.

I thought about this sudden lack of traffic a little bit. It’s not a big deal but it’s on the heels of work being slow and generally feeling like a failure, even though I know I’m not one. It’s usually during my hungriest times that I invent the my best work so this is not a bad thing even though my anxiety in the middle of the night would like you to think otherwise. And then I realized, I love blogging when nobody is reading! This is when I can ramble on and say whatever I like and I don’t have to think about this Aunt thinking this or that Uncle thinking that or that one lady who called me a cat murderer or my ex… etc etc.. you know, all the people you think about when you write publicly about your personal life on the internet. They’re not reading! I can write whatever I want to! I have a few things I really want to put out there in nether space. 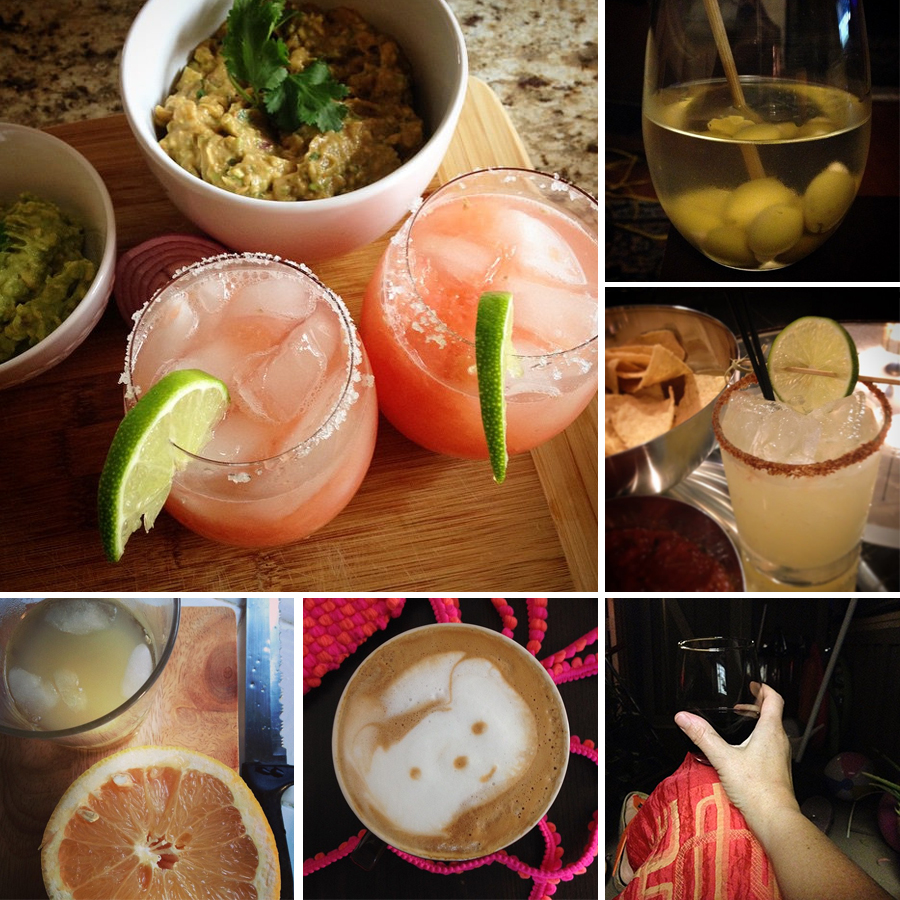 Like maybe I have a drinking problem? Just kidding. I’m pretty sure I don’t but I have to admit the worry has crossed my mind, especially since I come from a tee-totaling up-bringing.  But I think my drinking problem is related more to unnecessary calories than getting drunk. Which brings me to my next block of instagrams. 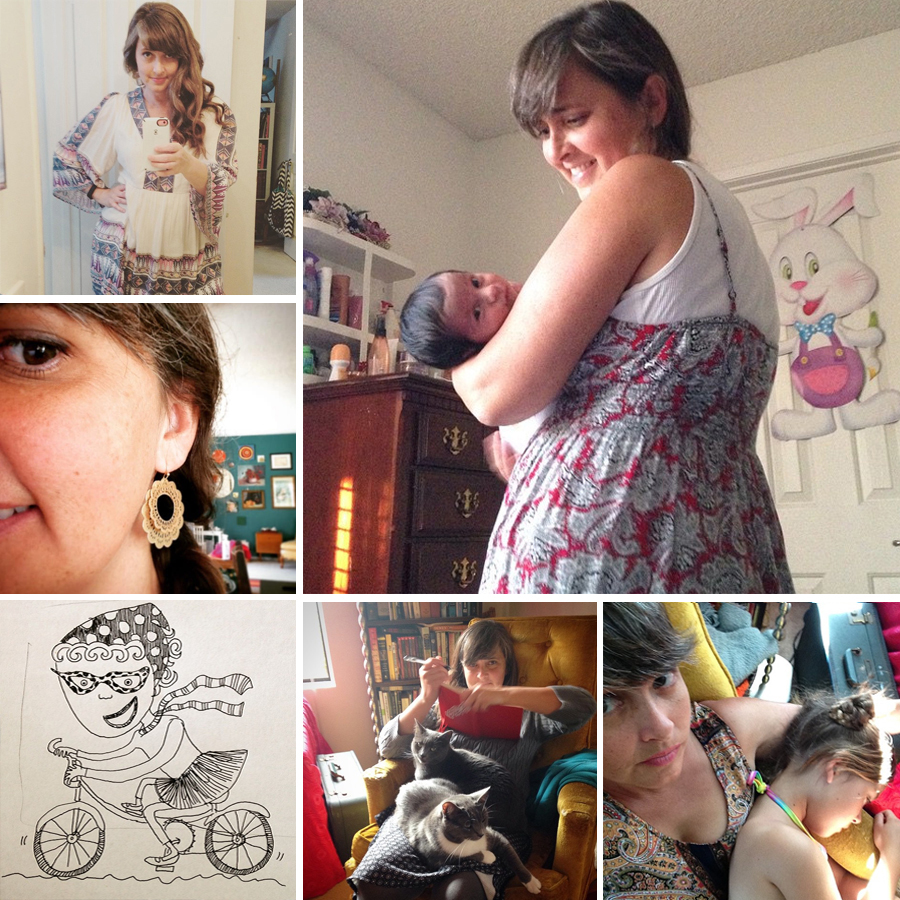 I have gained quite a bit of weight in the last year or so of happy-dating-life (Too many dinners out, too many tasty drinks, too many lattes, not so much working out…) so I’ve been trying to up my game by dressing fancier (earrings! make-up! new clothes!). I’ve been doing Stitch Fix for half a year now and I love it. It’s not the best if you are on a budget but it is GREAT for someone like me who hates to shop. I feel like I have my own personal stylist and she is AWESOME. She gets me better than I get me. None of my stitch fix outfits are pictured but I’m going to try and take more pictures of them in the future. 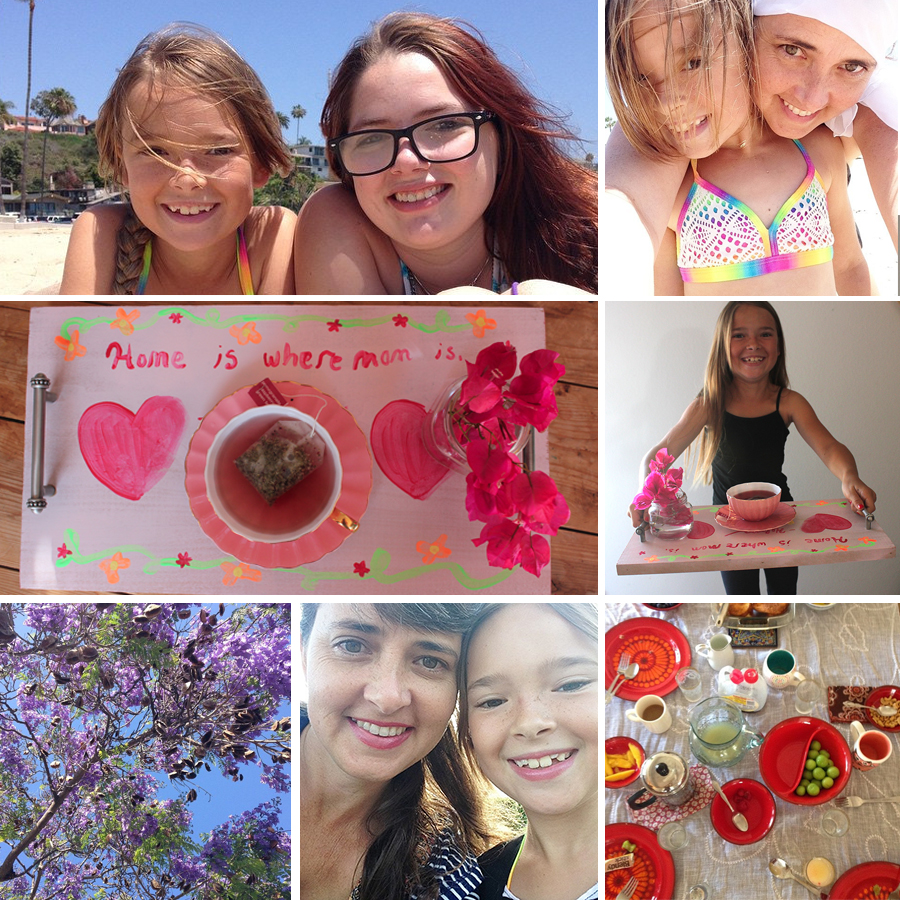 Next random subject: Mother’s Day. If I’ve learned anything in my life of forty-some years I’ve finally learned that if I want something to happen I have to take the initiative.

It’s funny how family dynamics change as you get older. When you’re a kid you’re always getting carted off to some relatives house for big dinners and festivities and you take it for granted thinking it’s always going to be that way. And it is for a little while. You have your own family and you cart them off to your parents or your grandparents but then at some point the grandparents die and the parents are too tired to throw dinners and family gatherings. If you want your family to get together YOU have to make the plans. If you don’t nothing happens.

This is kind of a big deal. I sat in my favorite gold rocking chair and it dawned on me: I am the matriarch of my family now. I have to make the plans.

I day-dreamed up a lovely brunch with Smitten Kitchen’s boozy baked French Toast and then I made it happen. And guess what? It was awesome. I just need to step into this new job and plan like a mother.

After brunch we all went to the beach and I sat next to my mom on the sand without any wifi-connected devices and we talked for two hours. It was the best. 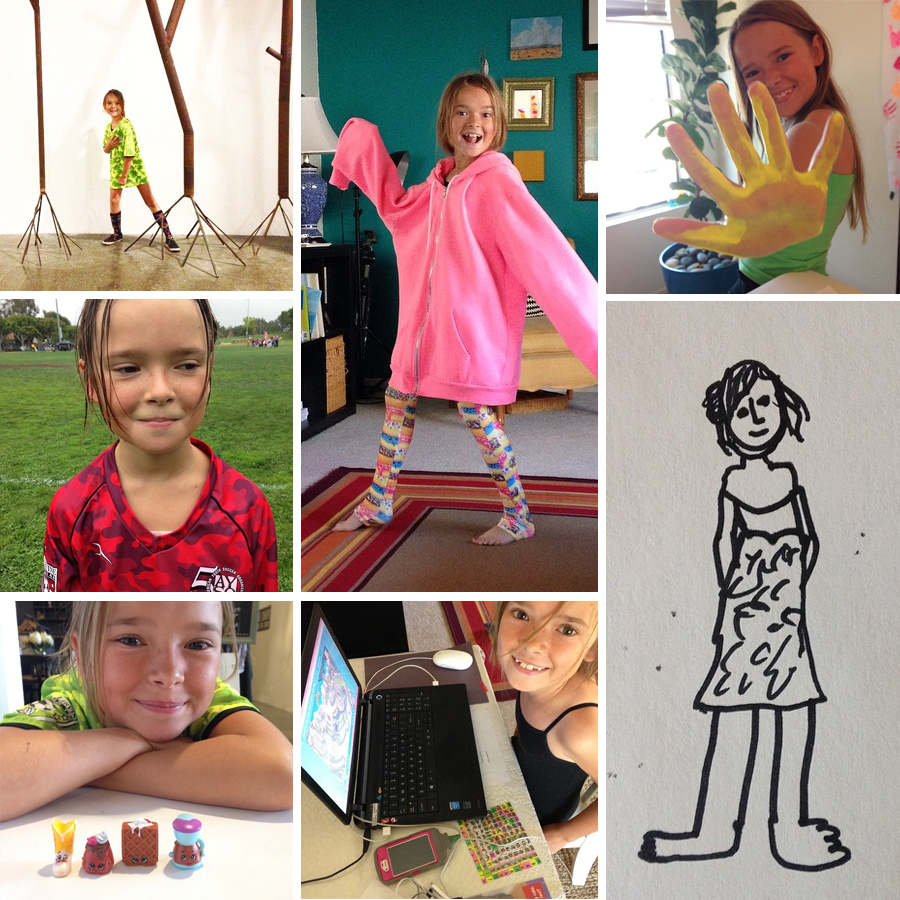 Which brings me to my kid. Oh, Bug. Where should I start? She’s a gamer. She can play minecraft for four hours straight if I don’t watch her and force her to log off. She also loves these little shopkin characters that I call “squigs.” They’re pencil toppers in the shapes of grocery store products and apparently they are all the rage. Or maybe they were all the rage. Who knows.

She wanted them for ages and begged for them but I didn’t know where to buy them and it just wasn’t top of my list of things to do. Then one day I discovered they sold them at Michael’s, a destination I seem to end up at every week (much to my chagrin) so I picked her up a couple mystery packs as payment for modeling for my alphamom projects. She was overjoyed. She devoured their packaging, reading every line of mouse type and discussing it with me while I listened half-heartedly. She couldn’t wait to take her little characters to school the next day. I think she even slept with them under her pillow.

The next day we were in a mad rush to get to school, as we often are, and somehow she accidentally dropped one between her bedroom and the car. When we got to school she was in a panic. Where was Waffle Sue!!? Her distress was palpable.

I wanted to be the tough mom and make her deal with the consequences of being late but as we stood in the crowd of parents and students during the weekly pep-rally, I just couldn’t do it. They were handing out awards that day and it was going on FOREVER. I know this is bad parenting but as they read off name after name after name, my eyes glazed over. I looked over at Bug mischievously and said, “Do you think going home to get Waffle Sue is worth a late notice?”

She nearly jumped for joy. Waffle Sue was SO worth a late notice in her eyes. She hasn’t had a late notice all year so we snuck off to the car like two delinquents. I know some people would probably shake their heads at this but hey, nobody’s reading!

We drove like the wind back home. She stayed in the car and I busted my butt up the stairs. I figured I’d retrace her steps and probably find it faster than she would. Sure enough, there was Waffle Sue, face down on the top step. I didn’t even have to unlock the door. I raced back to the car and drove as fast as I could safely back to school.

The whole trip probably took us less than 10 minutes and when we got back to school, kids were still milling around and not even in their classrooms yet. Bug probably could have snuck into class and nobody would have even known she was gone but she opted to take a late pass anyway. I thought it was kind of cool and she felt special.

After school I couldn’t wait to hear a full report on how much fun she had with her squigs. Did her friends have Waffle Sue too? Did they invent new games at recess? How did it all go over?

Poor Bug. She just looked down at the ground and said that her friends decided that Shopkins weren’t cool anymore. What?!!

But I’ll always treasure that memory anyway. Waffle Sue will always have a special spot in my heart. 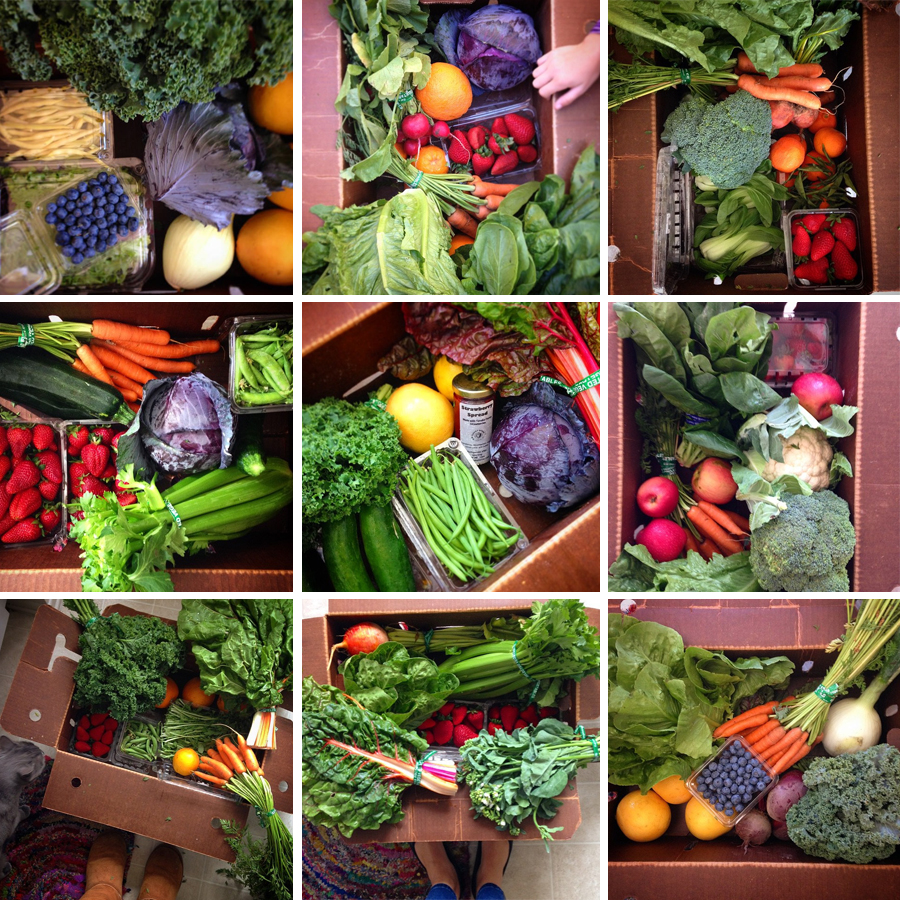 And that has NOTHING to do with the picture above but I’m just going to let all my blogging rules go out the window because nobody is reading and I don’t care! Wooo hoo!

I’m signed up for my local CSA box that comes to the farm across the street. It’s the best thing ever. Except I can’t always keep up with all the greens. I’m struggling with what to do with cabbage. I’m not really a big slaw fan (though I do like it) and I seem to have it coming out my ears. But I love the box as a whole because it only costs $22 a week and my fridge is always bursting with the best of the best fresh vegetables. The other night I made myself a dinner of just pan-friend green beans in butter and nothing else and it was delicious!

I wish I could be on one of those shows where a chef comes to your house and cooks with whatever you have on hand. Somebody could cook a badass meal in my kitchen. Why can’t it be me?! But I’m trying. I’m getting better at cooking (besides burning things constantly with my electric stove). I’ve been cooking a lot with Payam and that always works out well.

Speaking of cooking and Payam and showing the people you love that you love them with food…I have some really big news that I’m a little scared to share but I’m really excited about too.

I’m moving in with Payam in August. I know. This is big. Living in sin and all that… But I’ve been married before and I don’t want to do it again. I feel one hundred percent committed to him and in my struggling-with-faith eyes, staying in this relationship every day feels like a bigger honor than a piece of paper. It’s been a long journey to this decision with some twists and turns that I can’t write about on the internet (even if nobody reads) but it feels right and I’m super excited about it. Both of our (conservative) families know and surprisingly, they are letting us go right on ahead and make this decision with less struggle than I expected.

Payam has a nice house with an extra bedroom for Bug so we are all very excited about blending families. We are also super excited about blending the pet famlilies. Three cats, one dog, YAY!  And cooking together and just generally being a family. Tag-team parenting is so much better than single-parenting. I’m just scared for the teenage years but maybe it will be better with a partner.

*I know some people are reading. (And I love you very much.) I think the latest wordpress update I did messed something up but I don’t care because it’s a good thing to write for yourself and not worry about who’s reading. Maybe I can keep it up.

71 Comments → Blogging for No One