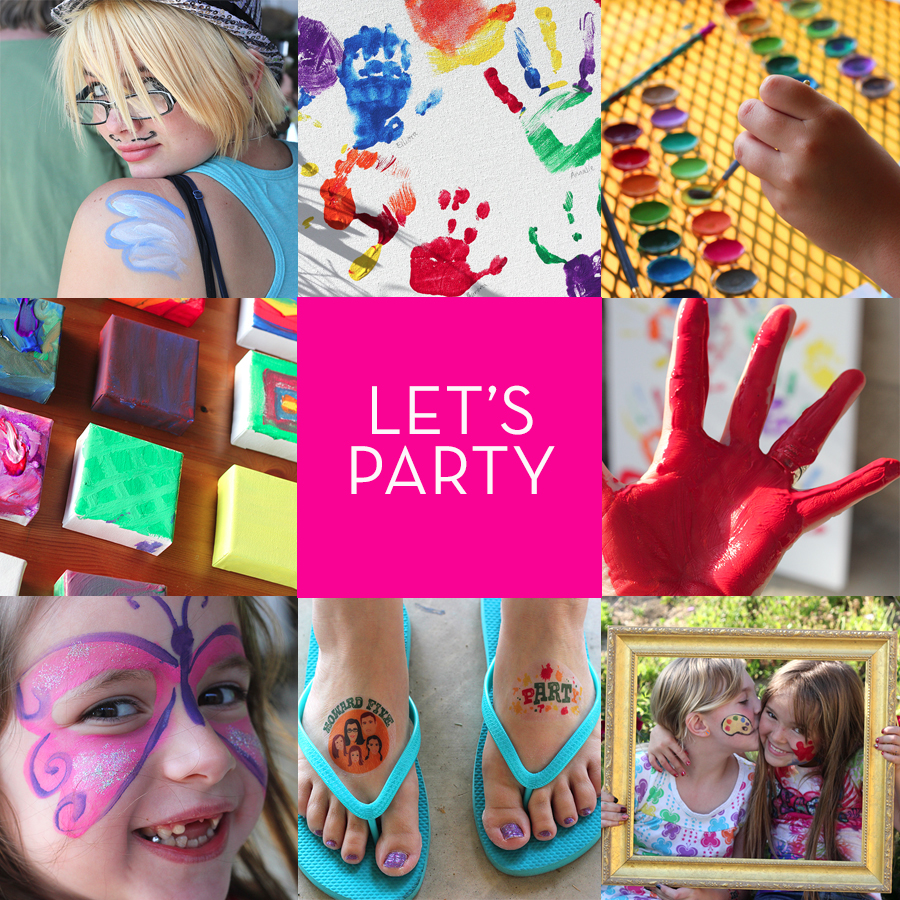 Hello again. Guess what? The redesign ate my website database and I lost yesterday’s post. But I’m determined to post it again even though I remember almost nothing that I wrote the first time. So if you are reading this again and I sound like a bumbling idiot having deja vu, I am sorry. Blame it on the beautiful new website design.

When I heard that Bethany’s daughter, Annalie, was thinking about having an art-themed ninth birthday party, I campaigned hard. She had a few other ideas swirling around in her brain but I may have influenced her just a tiny bit. Why? Because a party with ART?!! That’s like the most fun thing ever!

This was an especially great party theme for Annalie because she is a pretty amazing artist herself. I have never seen a child crank out masterpiece after masterpiece with such abandon. Drawings and paintings just fly off her fingertips. Her creativity is limitless and she is not at all encumbered with perfectionism which can really slow down most artists. 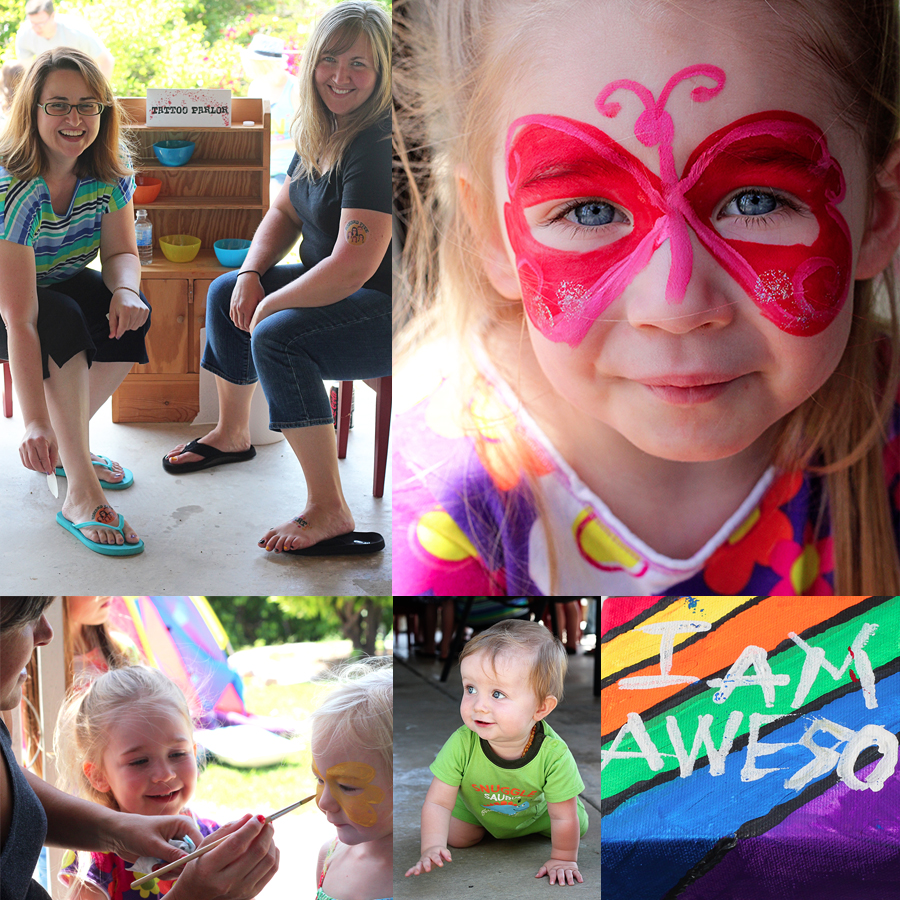 I recommend this theme for anyone really. It’s so easy to set up. Especially if you are like me and you already have a lot of art supplies on hand. You pretty much just set everything up and let the kids go crazy. Serve cake and call it a party. But since I’m the resident graphic designer/party coach and Bethany lets me do pretty much anything I want when I help her organize a party, I had to and make a bunch of matching things and call it branding. Paint splattered invitations and station signs and a splatted party logo that we made into tattoos! It was so fun. 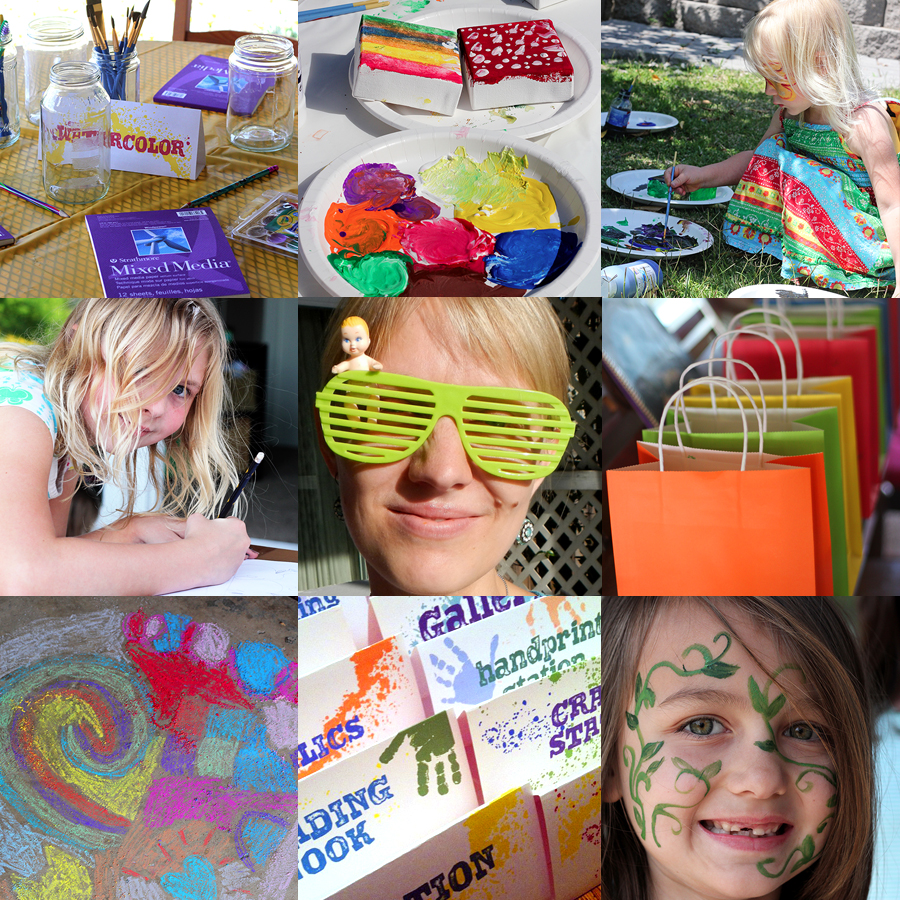 You might notice that we have some tattoos advertising the Howard Five. Isn’t it cool that Bethany can afford to hire a traveling band of musicians for Annalie’s party? Just kidding. The Howards are our long lost friends who up and moved from California all the way to North Carolina, abandoning us. We miss them. Since they were back in town, Bethany decided to throw them a little party too and combine it with Annalie’s.

I wanted to make a tatto booth like this one and I even got up super early in the morning and painted a closet box white with some old house paint Troy had on hand but it ended up being too small so we called it the Performance Art booth instead. 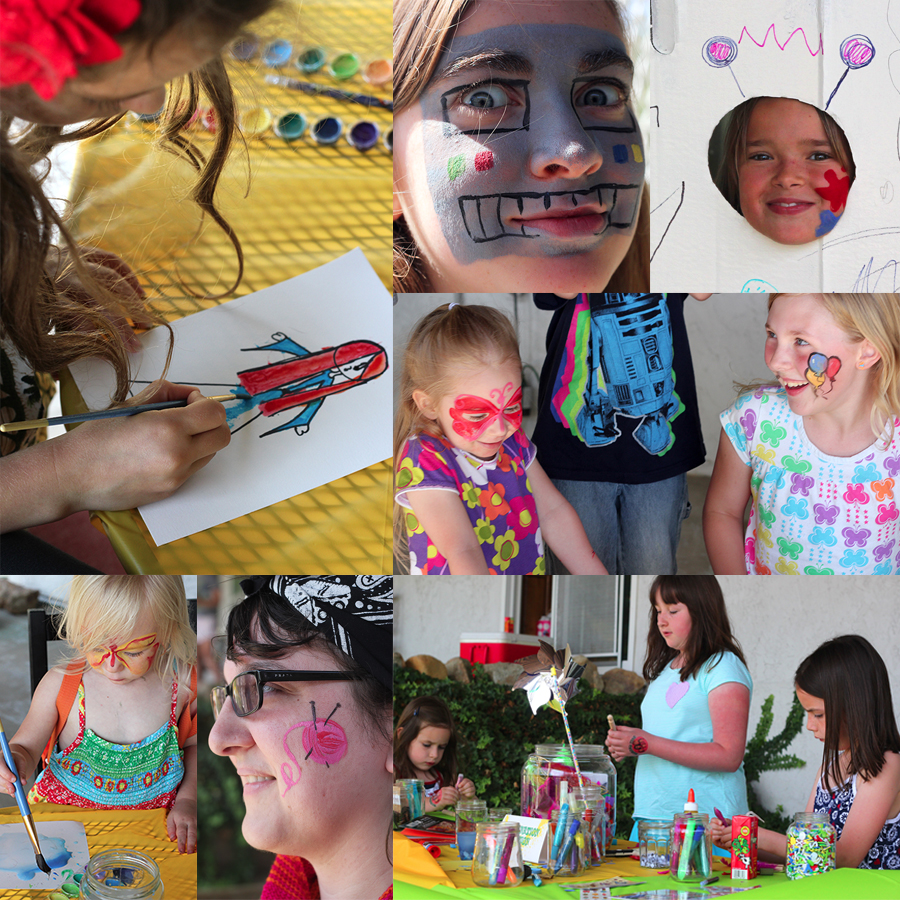 Since the stations we had at Bug’s black-cat-themed birthday party were such a hit, Bethany and I decided to set them up in her backyard too. I love stations because it allows everyone the freedom to go from activity to activity at their own pace. I love to see some kids get completely absorbed while others flit from table to table like butterflies. Everybody is happy.

What stations did we have you ask? Let me tell you!

1. The Face Painting Station: This was my station because I love to paint faces and I’m getting better too. Especially now that I’ve ditched that awful oil-based wax crayon that was a horrid mess. Water soluble is the only way to go when you are painting on kid’s faces.

2. The Water Color Station: This was just a table set up with mason jars of water, brushes, water color paper, paper towels for clean-up and some tooth brushes in case anyone wanted to experiment with splatter techniques.

3. The Gallery Wall: We hung some clothes line up between the posts on Bethany’s patio and made sure there were plenty of decorative clothes pins so everyone could hang their water color artwork to dry.

4. The Acrylics Table: This one I had a real vision for but I didn’t get any good photos of it because it was really bright and the harsh sun wasn’t that complementary. But what we did was set up a long table covered in white butcher paper and then set it with twelve place settings. Each place setting was a paper plate to use as a paint palette and on each plate was a 3×3 gallery size canvas. I love small square canvases because they don’t require that much of a time commitment. They are great for parties and short attention spans. Then in the middle of the table we set up jars of brushes and water and some bottles of cheap kid paint and of course paper towels in case anybody needed to clean up. It worked out pretty well.

5. The Graffiti Wall/photo booth. This was just a closet box painted white and then un-folded to be a big wall. I cut some holes out for people to stick their heads through for photos and then invited everyone to scribble on it with Sharpies. Graffiti is art too after all. We also had an empty picture frame and some funny sunglasses floating around in case anyone wanted to take a picture of themselves as art. 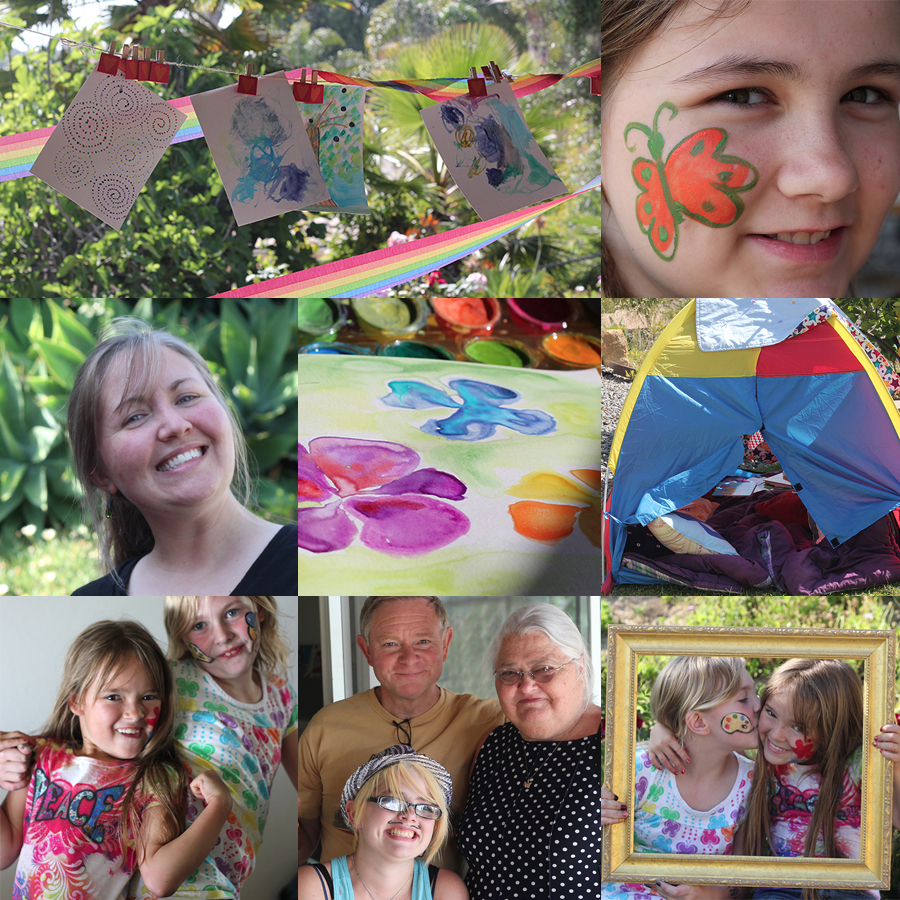 6. A Reading Tent: Bethany had the great idea of setting up a kid-sized tent and filling it with soft comfy quilts, pillows and some pictures books about art. I never thought of creating a little quiet space for party guests but it a huge hit. Everyone spent some time in there and commented how much they liked it.

9. The Imagination Station: This is probably my favorite station. We set up a table with every kind of bit and bob that we could find. Jars of buttons and sequins, feathers, rocks, stickers, glitter glue, pipe cleaners, marker pens, little left over ornaments from some Christmas craft…pretty much anything went and the kids loved it. They made all kinds of creations.

10. The Food Station: Bethany set out a bunch of rainbow-colored fruit in bowls and various other snacks on her dottery platters. I bunched up some of those cheap 99-cent vinyl table cloths and stuck containers underneath so that the food could sit at various levels, cruise-ship buffet-table-style. It was colorful and kind of fun.

11. The Handprint Station: Bethany bought a big canvas and we set out some plates with paint so everyone could paint their hand and then stamp it on the canvas. Then everyone wrote their name next to their handprint and Annalie can hang it on her wall as a keepsake to remember all the painty hands that came to her party.

and last but not least, 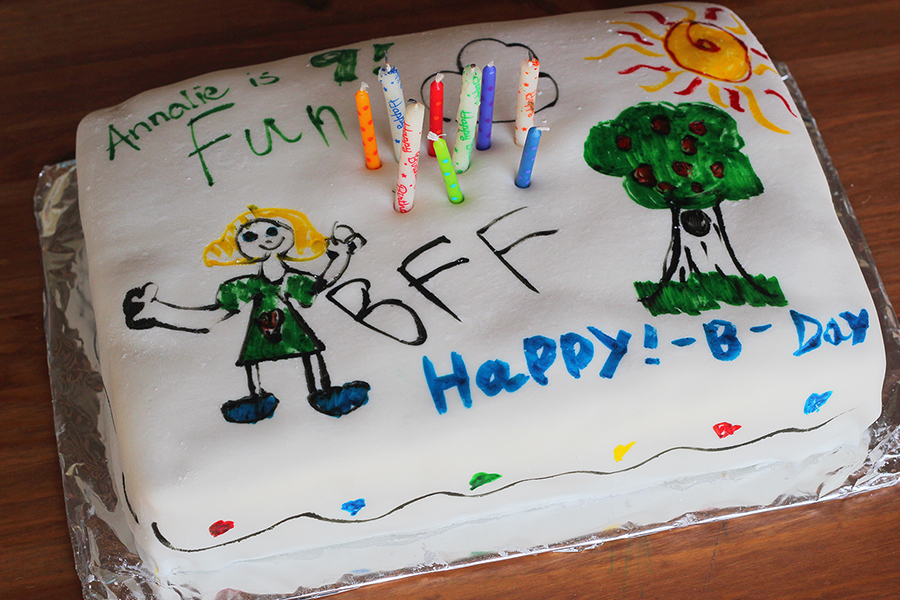 11. The Creative-Cake-Eating Station: This was all Annalie’s idea. She came up with the station name (and how could you deny a creative birthday girl that one?!) and the cake design all by herself. I don’t remember what flavor the cake was but it was tasty of course because, duh, Bethany made it. What was really amazing was the fondant top. Usually fondant looks cool but tastes awful but Bethany found a recipe for marshmallow fondant and then she added some fresh lemon juice and it was so yummy! Not plastic-tasting at all. Then Annalie drew on it with food-dye markers. I wanted her to cover it with graffiti and splatters to match the rest of my party branding but I think her drawing turned out super sweet too. 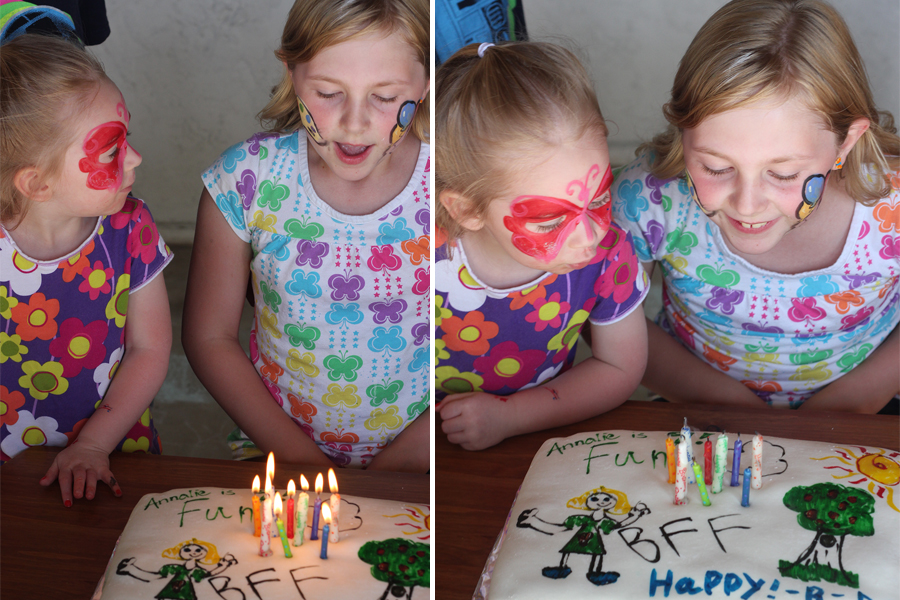 Really, the whole party was super sweet. I’m so blessed that I have friends who let me go crazy with my squirrel-nut brain and help them throw super fun creative parties. If I had my way, I’d throw a party every month but I can’t really afford that so doing it with other people’s money is the next best thing. Thank you Gronbergs!