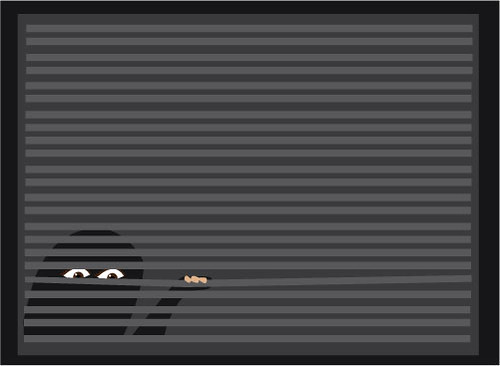 I live in an apartment complex now, as you know, and my bedroom has a window in it that looks directly out onto a parking lot. It’s not the view I would pay a lot of money for but it has become a great source of entertainment for me, surprisingly. Specifically, at two and three in the morning when I can’t sleep.

I know. I need to cut back on the coffee but insomnia for me is usually a good thing. It means I need to get up and work on something. It’s like bonus time for me. So whatever.

But lately I’ve been waking up and watching all kinds of strange things happen out my window instead of working. I guess I could call it procrastination.

One night I woke up for some reason or another, probably some college kids coming home from a party were talking or something and when I peeked out my blinds I saw coyotes everywhere. Like three or four of them sauntering sideways in between the cars. It was the creepiest thing ever.

I know they live near us because we hear them howling from time to time and there is a nature preserve across the street so it’s to be expected. But there are a lot of bunnies that live in the green areas between the apartments too. So I figured the coyotes weren’t that active because obviously the bunnies were not being eaten and they were thriving. In fact, they thrive so much it’s not uncommon to come upon our little grassy knoll and see four or five of them munching away on the sweet tender grass. Bug loves it. I even thought I might let my cats out since it seems to be so safe for bunnies.

I’m glad I didn’t because those coyotes were everywhere. They were so quiet and stealthy. The partying college kids didn’t even spook them. They are like shadows slinking in the dark between the cars. I watched them for a good fifteen minutes go in and out of the trash areas in the parking lot.

My cats wouldn’t last a minute out there with them. In fact, now I know why my cats don’t seem to be so keen to go outside after being outside cats for so long out when we lived in the sticks. They’ve seen the coyotes out the window. They stay up all night and they’ve known all along.

But that’s not all I’ve seen out the window. I’ve seen all sorts of drama play out. People get in arguments. People gossip. People put strange things in their trunk. I’ve turned into a regular nosy nancy. I try not to but they wake me up and then I’m awake and the window is so conveniently right by my bed.

The other night I woke up from a terrible nightmare. That probably already had me spooked so what I saw was probably tinted from my strange mind wanderings. There was a man standing by an SUV parked directly in front of me. He was pacing back and forth and mumbling into a cell phone but what was more odd at three in the morning was how he was looking back and forth like he was looking to see if he was being watched. In fact, it occurred to me that he wasn’t really on the phone at all but was just pretending to be and using it as a cover in case someone was looking at him. Of course he never thought to look up and see me, his eyes were scanning the parking lot. So I watched him. He seemed suspicious.

He opened up the car doors and appeared to be looking for something. He closed them quietly. Then he walked over to a bush a bit of a ways off and peed behind it. Men. They always do that and I always see them. I really don’t want to but it happens all the time. Anyway, I thought it was super odd that he didn’t just walk to his apartment and use his bathroom there but maybe he didn’t live here. So I watched him.

He came back to the SUV and opened up the back hatch. He lifted blankets and appeared to be putting something in two suitcases at his feet. I couldn’t see the suitcases or what he was handling very well because it was so dark. I started to get spooked. I thought maybe he was robbing the car. So I decided to beep my car alarm just to see what he would do. My car is parked on the other side and not near my apartment at all. Sure enough when he heard the beep he looked up with alarm. He quickly closed the hatch, grabbed his suitcases and started booking it towards the pool. I decided I better call the police.

I called 911 and gave the dispatcher a brief description. Two minutes later two cruisers came driving along. Of course the man with the suitcases was long gone into the dark pathways between the many apartments but it was comforting to know that the police come that quickly. I don’t think I’ll ever know if they caught him.

The next day I walked up to the leasing office and told them what had happened. They said there had been a few break-ins recently so they were happy that I had reported the suspicious activity to the police. I wanted to know if anyone had reported anything stolen. So far nothing from that neighbor, they said.

I watched the SUV over the course of the weekend and I never saw anyone come or go from it. I asked a few neighbors if they knew who’s car it was but nobody did. Then the night before last I saw a man who looked pretty close to the guy I thought was the thief get in the SUV and drive it away.

Bah! Either my suspicions were all wrong and he owned the SUV or he was back to steal it! I watched carefully. Then an hour later he drove it back and parked it. All my sneaky crime-fighting stealth was in my head! Nobody stole anything. Why he acted so strangely and had to pee behind a bush I’ll never know. But I will say this: those neighbors who park their cars in the vicinity of my window are lucky! If anything suspicious ever happens between the hours of 10pm and 8am, I’ll see it! I’m not so sure I’ll call the police so quickly next time but I might sneak a cell phone picture.