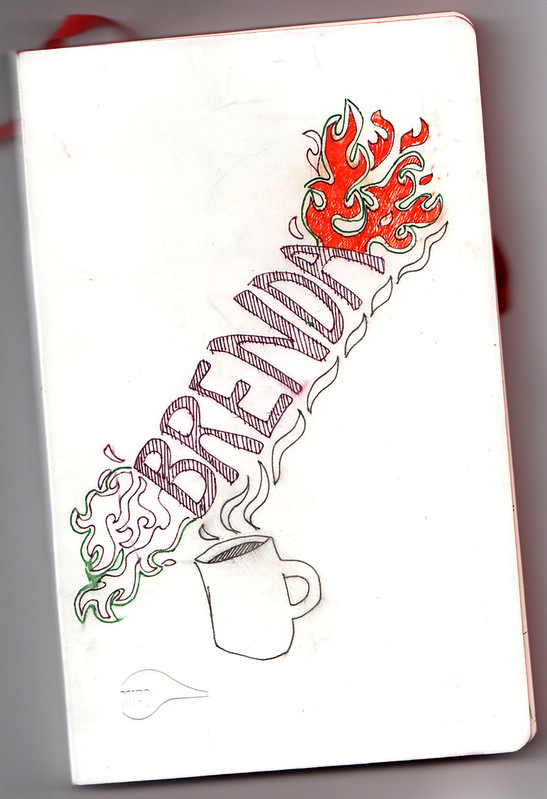 It’s that time again. Time for sketch illos! Woo hoo! Technically, it’s just a random Saturday and not special at all but I’m kidless and you know what that means. It means I can blog like I’m not a mom! Hah! I’ve got time on my hands! Remember the days when I would post every day? Yeah, me too.

Whatever. Life goes on. Kids are fun.

So Miro gave me this really cool notebook. They gave us a bunch of them for my midlife crisis camp retreat. And I’m finally getting around to sketching in mine.

I figured I should give you guys a little review of the product and throw in a sketch blog post while I’m at it.

Here’s my official review: Miro notebooks are almost like a moleskins but not. They are the same size. The paper inside feels really nice and is perfect for writing on with my favorite .38 Unibal pen from Tokyo Pen shop and they’re super handy to carry around in your purse.

At first I thought they weren’t as good as moleskins and I was slightly disappointed because the pages pull apart easier and the cover is softer so your pen will indent into it if you happen to use the cover as a hard surface—like when you’re trying to write down your insurance information for the teenage kid who rear-ended you. It’s kind of strange how soft the cover is. I haven’t really quite figured it out honestly.

However, in the vein of let’s-just-trash-the-notebook-already and not-put-so-much-pressure-on-keeping-it-perfect-all-the-time, ala Kerry Smith it’s kind of nice. In fact, I’ve made some really great progress at wrecking it. It’s going to be a well-loved work of art when I’m done. Sort of like the Velveteen rabbit but in reverse because my stories inside were already real and I don’t really want them to come back to life again.

Anyway, that’s my official review. I think Miro is a great product. They seem really down to earth and I hope they stay that way. 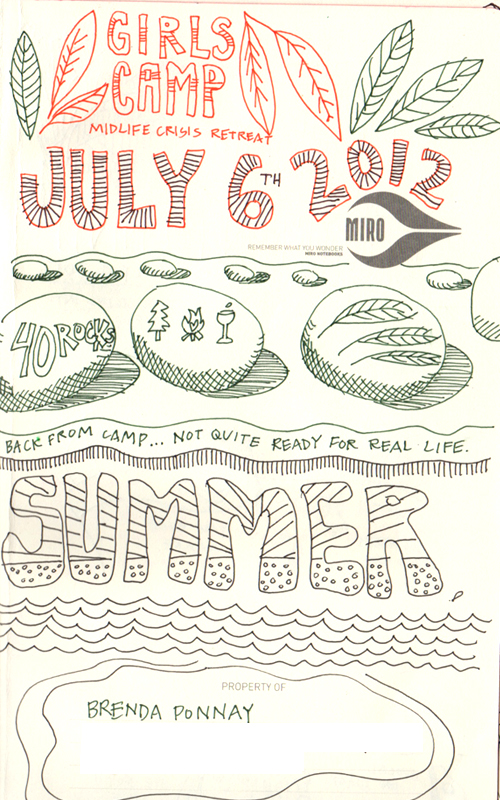 Here’s my first page. Of course I start out a journal trying to be really neat and careful. That all quickly goes with the wind. 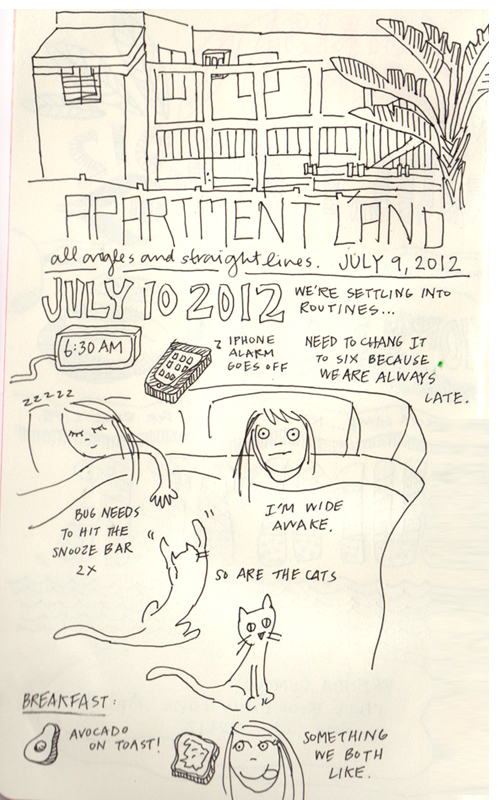 A few days later back in apartment land. I drew this while Bug splashed around in the pool. I was going to illustrate a typical day for us but that was as far as I got. 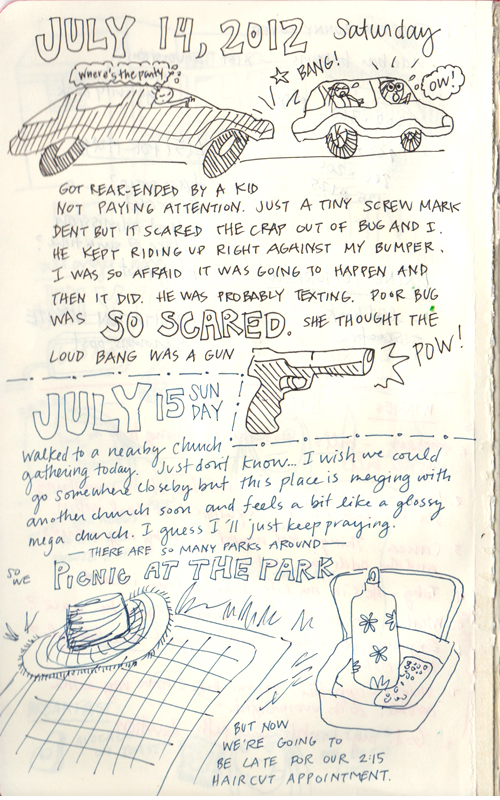 Then we got in a very small wreck. It was terrible. We were coming down a hill to a stoplight and this guy kept driving right up on my bumper. I was watching him in my rear view mirror and he was making me terribly nervous. But there was no where I could go because cars on my right were going much faster than we were and on my left there was a big landscaped meridian.

So I had to sit there like a duck about to be hit. And sure enough KA-BAMMO! He hit us and it was SOOOOO loud, like a gun going off in your ear. It scared me so bad I started screaming, asking Bug if she was okay. I thought she might be hurt because she was in the back, nearer to the point of impact but she was fine. She just thought we were hurt because I was screaming so loud asking her if she was okay.

We were both shrieking like we were about to die and we were FINE but we just didn’t realize it. I got Bug and I out of the car and sat on the curb shaking. Literally shaking like I had Parkinson’s. The kid who hit me seemed really sorry and confused. He was looking at the back of the car and me and then finally I pulled my wits together and got up to look at the damage.

I was expecting my whole bumper to be imploded but there was NOTHING but a teeny tiny screw-shaped punch hole in my bumper. No damage on his car and certainly not enough damage on my car to even bother with calling insurance over it. I’ve been in three wrecks this year already (all not my fault) and I just can’t go through all that again. Ugh. I hate it all.

So the good news is we’re fine. My car is probably most likely fine. I should get it checked out to make sure everything is sound structurally but my bumper looks like it’s fine. Poor Bug though. As if she didn’t have enough to worry about. Now she has to add getting rear-ended to her long list of anxieties.

Ignore the rest of that post. I don’t want to talk about church/meeting stuff. That’s another car wreck in my brain. 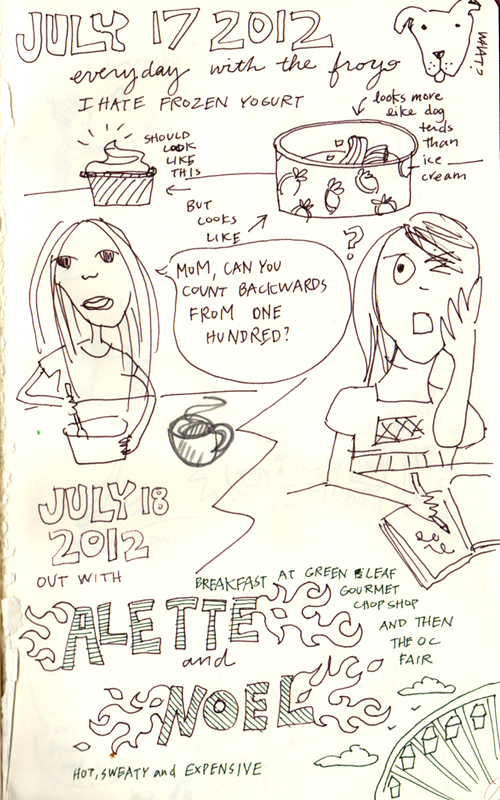 Why do you like these sketch diary illos again? Because you get to see glimpses of my not perfect life that I normally don’t like to share? Hmm….why am I not so good at editing myself when I’m sketching? I don’t know. 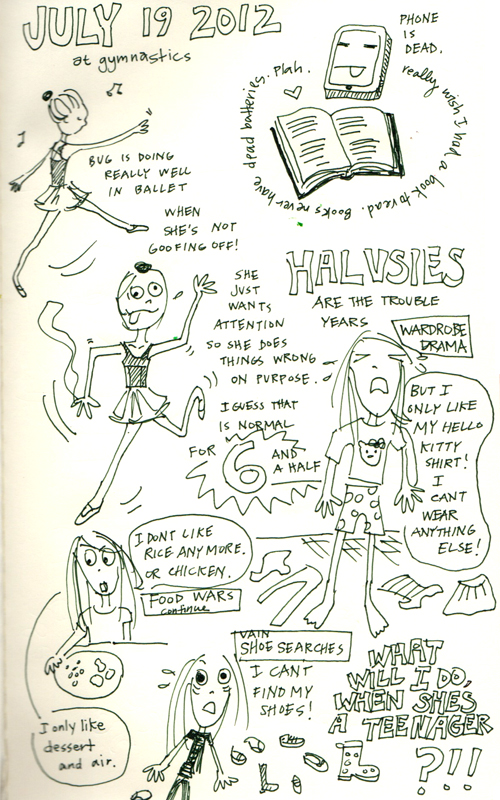 And lastly some Bug stuff. You know the minor glitches that six-a-half-year-olds give you when they are testing you and their limits. I really should sketch me and my glitches too because as often as she gives me attitude and grief, I am a terrible mom who ignores her accidentally because I’m working too much or playing with my phone too much or just being in my own world too much. I know she loves me and most likely she’ll forgive me as she gets older but I just need to put it out there that I’m so not perfect and I make so many mistakes every day. Ugh.