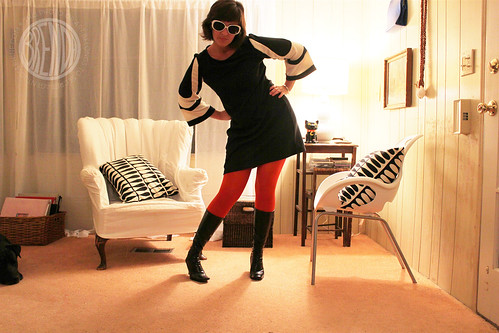 If I learned anything today, I learned to NEVER pay full price for costumes. Not that I ever have but when I was at the bounce house rental store the other day, I poked around their costumes thinking I might find something princessy I could wear to Bug’s party this weekend. I am the queen mother after all. I should be dressed appropriately. They had princess costumes for adults alright but they were horrible!

I don’t know what was worse, being Cinderho with her skirt up to there or the over-pricedness of the crappy fabric! Bagged packets of cheap fabric sewed horribly with scratchy thread, that’s what they were and a lot of them cost upwards of fifty bucks! You know what else? The bags were sealed so you couldn’t try them on. A total waste of money. I’m almost 40, if I’m going to wear a short skirt, I need to try it on first. I figured I could do better at home with an old skirt and a poofy blouse with a tight belt and call myself a peasant.

Then we hit the thrift stores. Gold mine!! I found that funkytown number you see above for three bucks! Don’t worry, I’m NOT going to be wearing to the princess party. I might be a funky queen mother but I’m not that funky. It was just too good of a deal to pass up. I think I’ll wear it to church. Ha! Maybe not.

Then hiding amongst the dusty old wedding dresses, I found the most royal of queen mother costumes ever: a velvet bridesmaid dress or maybe a choir costume from the 70’s. Empire waist line, completely modest neckline (for all the bending and scooping I’m going to be doing) and a floor length skirt in flawless purple velvet…it’s so perfect!!! I could swoon. 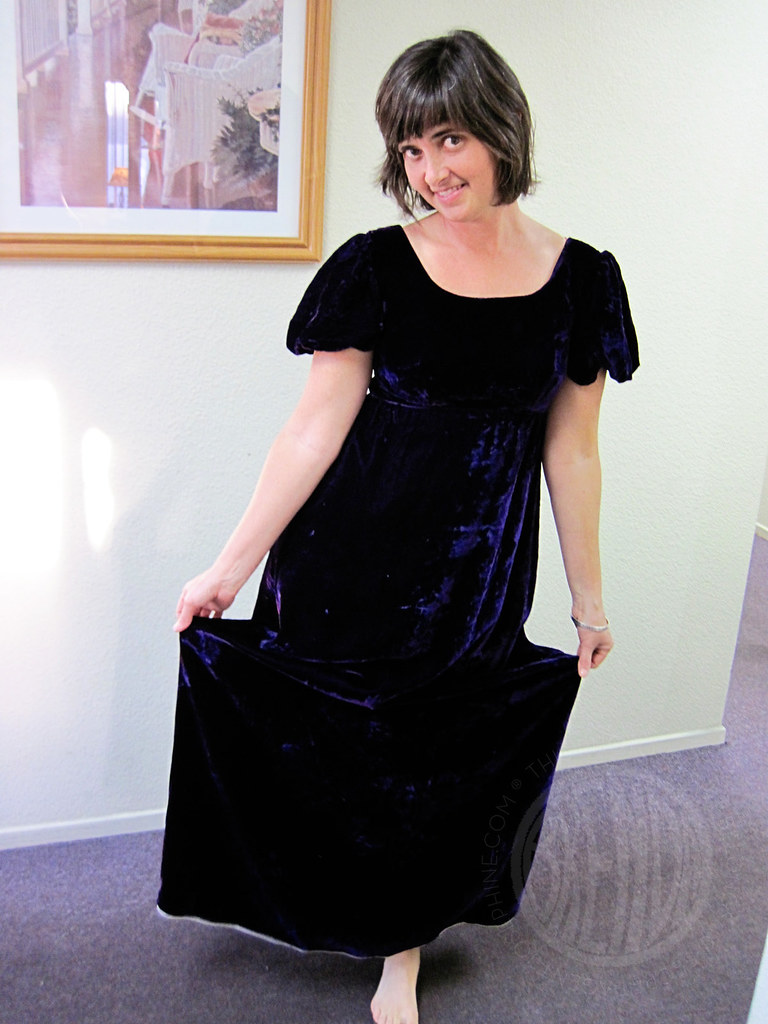 I know it’s hard to tell how perfect this dress is because you are so distracted by the awful-bad-hairday-mullet I’ve got going on. I spent the day gardening with my hair pulled back in pigtails then I thought I’d just run a wet comb through it and hit the thrift stores. Wet combing never works. But whatever, I don’t have time for vanity when thrift stores close at five! Also these pictures were taken with my water-proof camera at my aunt’s seamstress shop so they aren’t the best quality and the velvet is a mess of black. You’ll just have to trust me on this. The velvet is not black. It’s a beautiful shade of deep purple. 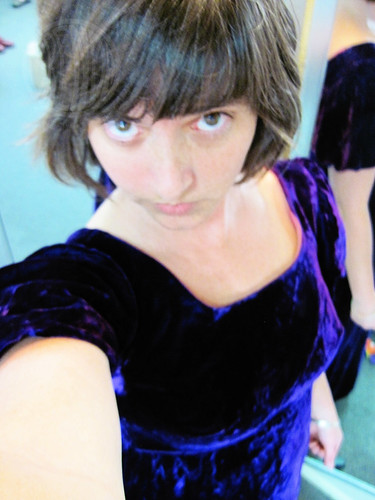 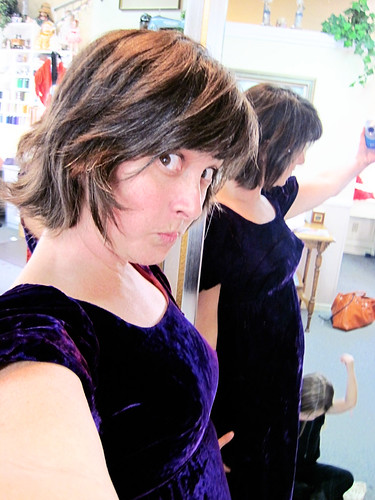 You can kind of tell in these shots where I’m trying to over-compensate for my bad hair and double chin with the classic hold-the-camera-above-your-head photo technique. You’ll see in the photos after the party. It’s the most perfect dress ever.

Except for one tiny little thing. Just a smidge of an issue. I can’t breath when I wear it. Seriously, this dress was so small on me. I could zipper it but I could only take half breaths because the empire waist was cinching me in half. If I wanted to, I could exhale completely and bust the whole dress off me in one incredible hulk move. It was tempting.

Good thing I have a seamstress in the family. The dress was only three bucks so I bought it anyway and drove straight to my Aunt’s shop declaring it a fashion emergency. 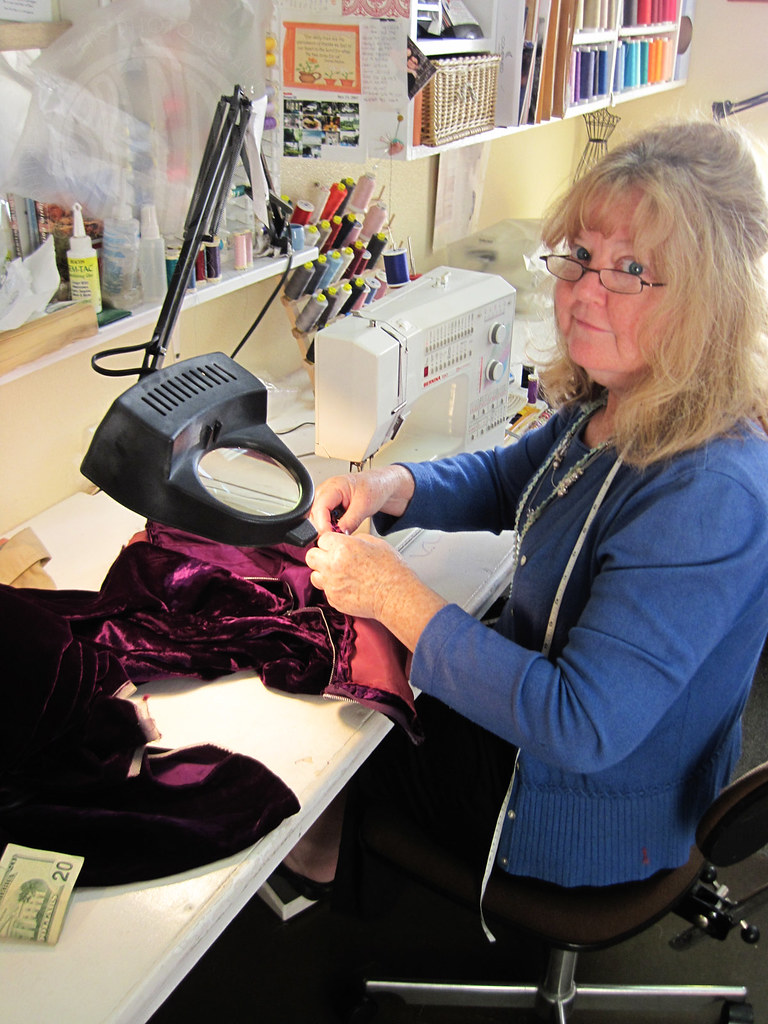 Auntie Keren to the rescue! My aunt is the bomb. My mom said there weren’t any seam allowances to be let out, my aunt disagreed. She ripped, pulled, sewed and ironed. I tried it on again. Still too small. I slipped her a twenty. She said she’d do something magic and I could pick it up on Friday.

I’m not worried a bit. She’s Keren!! If anyone can make it happen, she will. She can do anything. I am confident I’ll not only be able to wear it all day, I’ll probably bounce in it in the bounce house in it! I have no idea what she’ll do but I know my aunt. Anything is possible. Besides the dress was so cheap! It’s worth it alone just for the fabric! 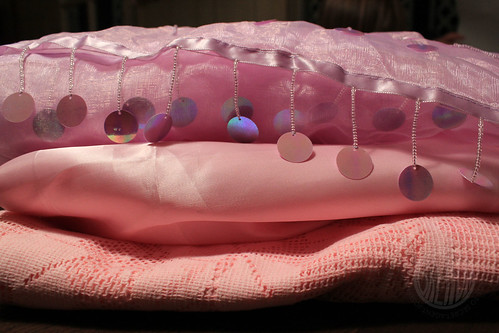 Speaking of fabric, have any of you tried to sew tablecloths lately? My mom and I went to the fabric store with visions of a six-foot princess table covered in a pink cloth trimmed in flounces (ribbon maybe?) and roses on the sides. You know me with my over-the-top visions when it comes to party planning. I wasn’t going to have anything to do with those awful paper/plastic/vinyl table cloths that cost a buck fifty and whip up in the wind and float across the yard. I had bigger ideas.

I had big ideas until I did the math that is. Nice pink 60-wide fabric is not cheap!!! Even the cheapest would have cost me over thirty dollars. I was so depressed. I can’t spend money like that. It’s just a five-year-old’s birthday party, not a wedding. So I went home with my tail between my legs, dreaming up blog posts where I show you how to sew/tape/glue/whatever paper tablecloths that actually stay ON the tables. It would have been a good idea too. I probably could have even pulled off little paper-vinyl rosettes and flounces with those cheap plastic tablecloths. Who knows maybe I’ll still end up doing that.

BUT! I found pink tablecloths at the thrift store. Technically one of them is some kind of fancy bed canopy thingy, another one is a bed skirt and one is a lace tablecloth that someone accidentally washed with a very red shirt. I don’t care. They work for me. I think they’ll be perfect for a fancy princess party. Just you wait and see!

In other news: My backyard is looking fabulous. 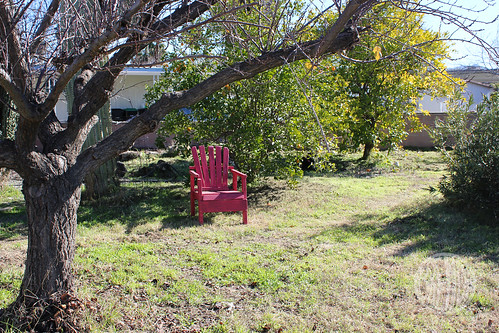 I hired some gardeners and they came secretly while I was gone and mowed everything down. They’re super ninja gardeners. I didn’t see them or hear them. They just got the job done. My backyard wilderness looks like a peaceful park setting! 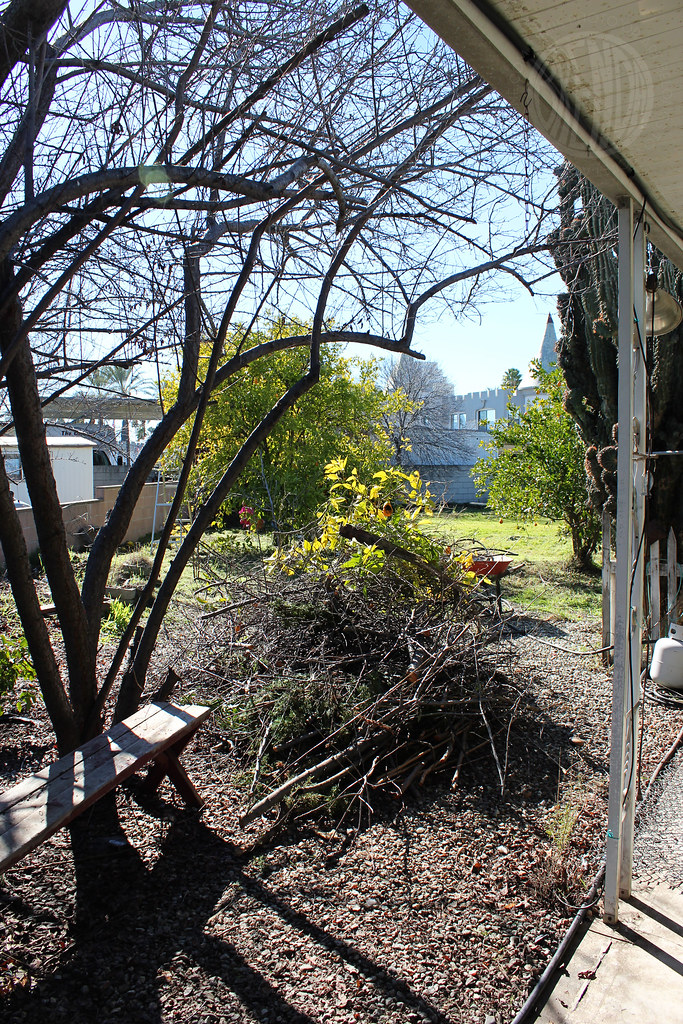 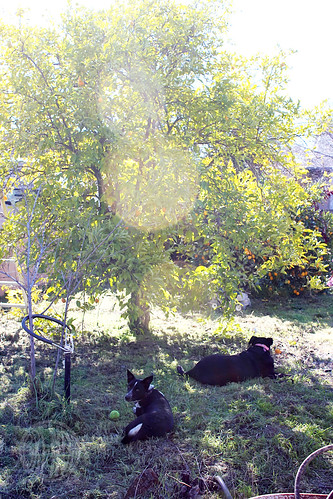 Nevermind the GIANT brush pile and the rolls of chain link laying around. The gardeners say they will be back Friday to remove the brush and the handyman family friend says he’ll be back today or tomorrow to whip the fence up. Or we’ll just discreetly roll the mess of chain link off to the side somewhere. I’m okay with that. It looks good enough to me. We’re ready for a backyard Princess Party! 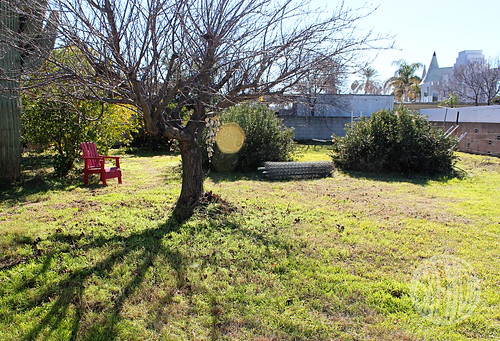