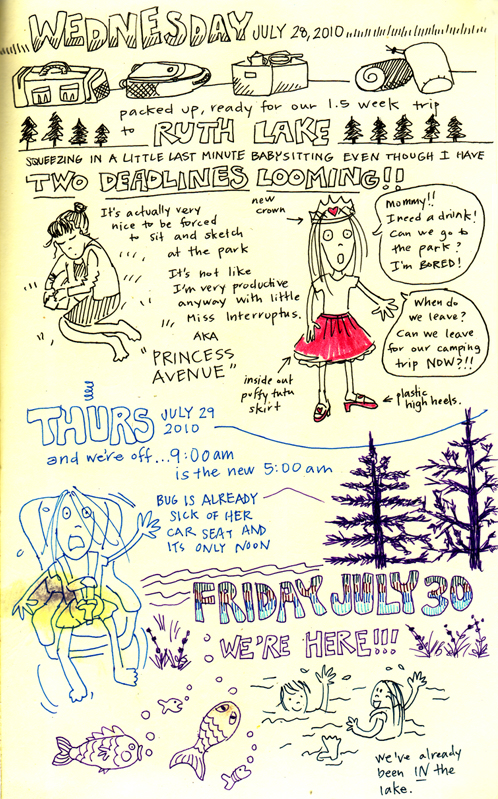 Not too much to say here… Just the usual getting ready for a trip which is tricky when you are a freelancer and don’t really have a vacation schedule. Bug was very excited. The excitement wore off about three hours into our trip. I packed Where’s Waldo books, movies, coloring books and snacks but nothing really fought off the awfulness that is being trapped in a 5-point harness car-seat. I think we’re going to have to move her up to the booster seat soon even though she only weighs 31 pounds. Poor kid is a small fry. She’s probably going to technically still fit a car seat when she’s in high school.

Also, the lake felt wonderful. We went swimming with Bug’s older cousins the first day. It was a blast. They showed Bug how to cannonball off the dock but she never quite got it. 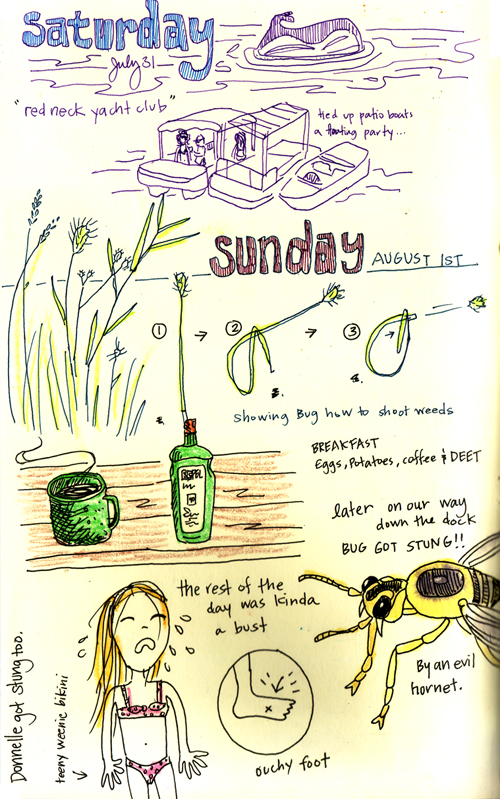 Sunday Bug and I woke up early and explored the woods while everyone else slept. I taught her how to shoot the dinglebop things off the top of weeds. My sketch is the best way I can describe that. Later we attempted to go out to the Red Neck Yacht Club again but Bug got stung by a hornet on the dock and that pretty much ruined that. She was pretty tough though.

That evening her brave Uncle Anthony busted up the dock and attempted to drown the hornets’ nest with a big stick but they kept coming back. 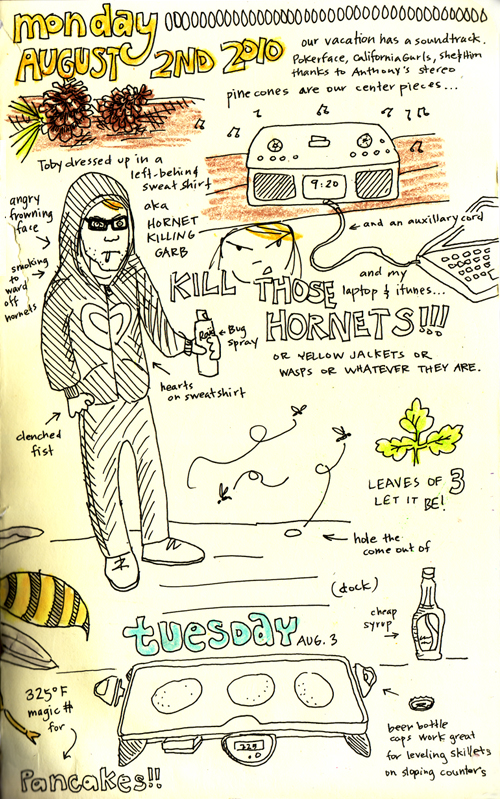 The next day Toby was on a mission. He bought about five cans of some sort of bug poison, dressed up in the thickest sweatshirt he could find (which happened to be something black with hearts on it that his sister-in-law had left behind) and sprayed them one by one until he killed most of them, or at least what he thought was most of them. 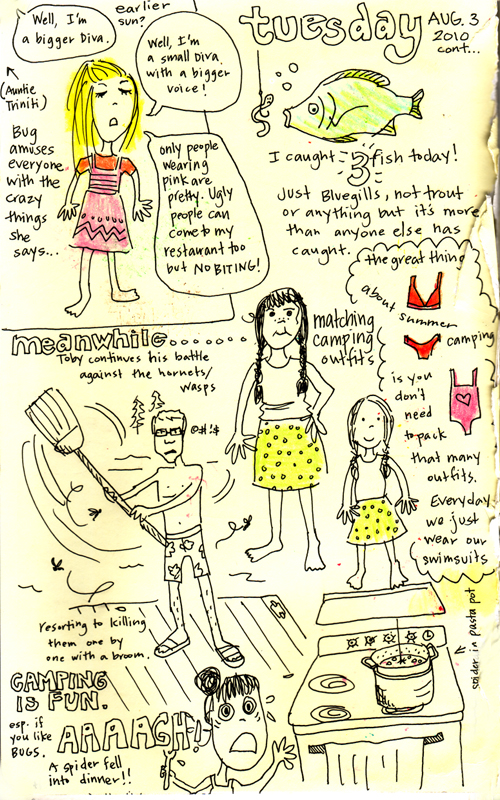 But the hornets came back. So Toby spent another three hours swatting them with a broom. That eventually pissed them off enough to make them seek shelter elsewhere I guess because we were able to use the dock after that with very little hornet dive-bombing.

I also caught three fish right in a row. That was pretty cool.

And the bugs… oh the bugs. We discovered dozens of new species every day. 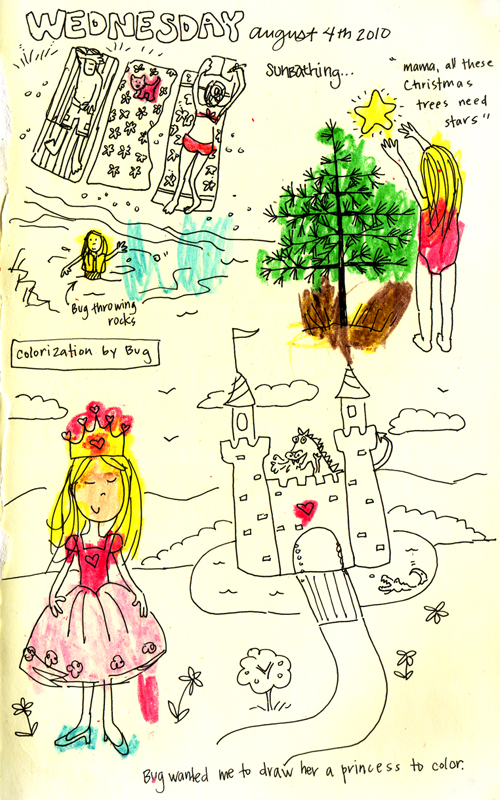 Everyday we swam and hung out by the lake. There wasn’t much else to do. It was lovely. 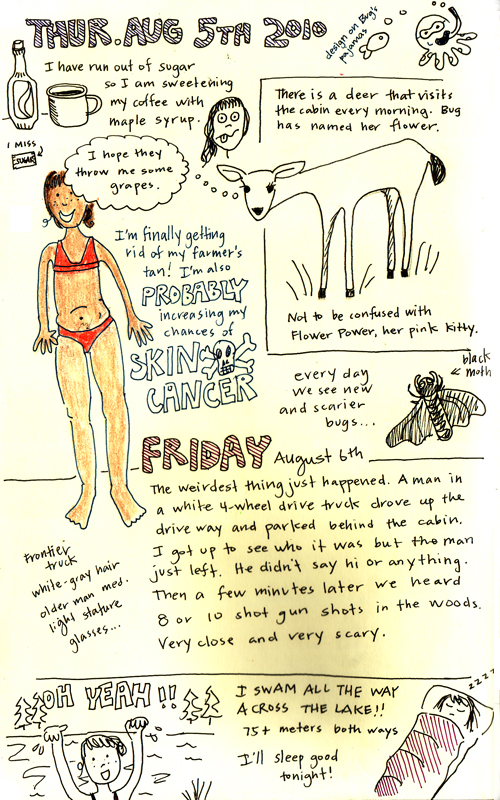 I ran out of sugar so I used maple syrup in my coffee. It’s not that great.

On Friday we had a visitor. He creeped us out by driving up the driveway, getting out and looking at something, then getting back in his truck without saying hi, and driving away. He didn’t even look at us. Then ten minutes later we heard a bunch of gunshots and I thought for sure he was out to murder us. But it turned out he was just an inspector guy that the family was expecting. Silly us. We never did figure out what the gunshots were from.

I DID swim all the way across the lake at one point. I was so proud of myself. I’d seen a 72-year-old woman do it the day before so I knew I could but when I was halfway there the wind picked up and Toby got nervous. Apparently I’m a strong swimmer because it was no big deal. I could do that everyday if I had the chance. 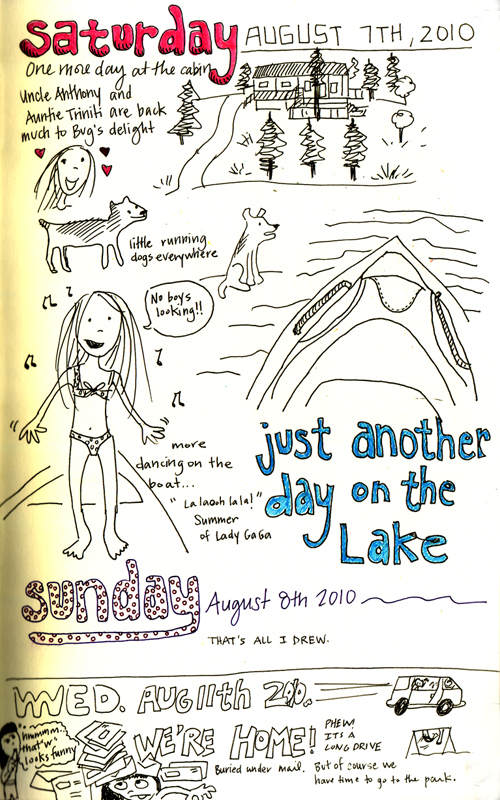