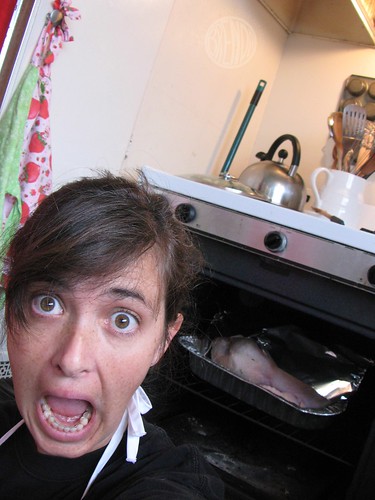 I was a little freaked out with the turkey preparation. It’s raw. It’s big and heavy and it still has arms and legs. It sort of weighs about the same as my kid but it has no head. You put stuffing in its neck hole and in its butt. I drew the line there, I’m not stuffing a turkey’s butt. Then there was that bloody neck thing and the giblets! I almost cooked the giblets in the bird in their plastic bag!!

I couldn’t find them. I was digging around inside the bird cavity but all I could feel were bones and slimy turkey. So I went ahead and stuffed the turkey and then I read the package that said giblets were included so I freaked out thinking I had stuffed them in with the stuffing. I wasn’t about to un-stuff the whole turkey. I was feeling more like throwing the whole thing out the window. Then I called my mom and she told me they put the giblets in the butt. What?!!! Sure enough, there they were. Gross. The whole process is enough to convert me into a vegetarian again. 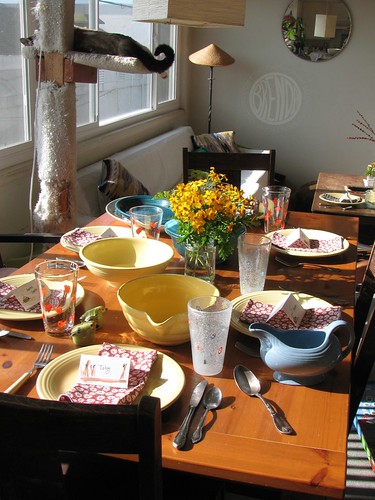 After that was done, everything got a whole lot easier. In fact we had the table set and hours to kill before our guests were to arrive. It was actually a bit boring. So we made name cards and went around the block to pick flowers—something I would usually let the kids do since that used to be my favorite job when I was a kid. 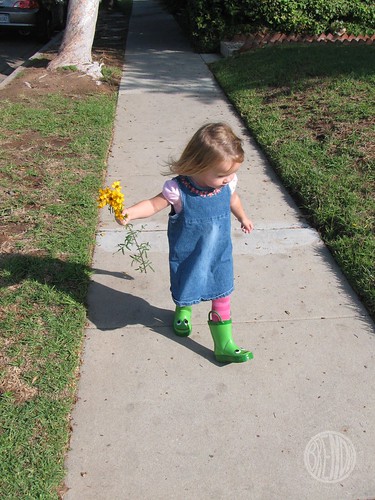 Since I didn’t let Bug stuff the turkey this year (due to a raw-turkey-licking incident that sent us all into a tizzy, freaking out over salmonella poisoning) I figured I might as well let her in on another family tradition: the kids get to decorate the table. I didn’t spend any money on flowers this year. I figured that was an easy way to save $40 and we usually move them off the table anyway to make room for food. Neighborhood flowers are free and I even asked our neighbors first this time instead of stealing them like I usually do. 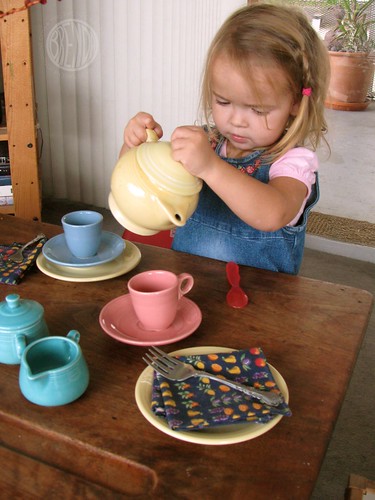 Bug had a good time setting her own table for her and her cousins. I’m so glad she’s old enough to play with glass dishes now without breaking them. She has the cutest wee Fiestaware set that her grandparents (Toby’s folks) got her for Christmas last year. It was perfect for the kids’ table. And of course invisible tea had to be served over and over which was great later on for keeping the kids occupied while the grownups had four different conversations all going on at once.

Everything pretty much came together after that. Also, my mom got there so of course things went smoothly for her. She was supposed to teach me how to make gravy but I keep finding ways of not learning. I know it’s supposed to be easy and it does seem so until I’m alone in my kitchen trying to do it by myself. I just don’t have cooking common sense. That’s my biggest problem. I also hate reading directions. I skim and skip and leave parts out. I also combine recipes in ways that seem logical to me but then completely illogical to anyone else. Toby says I’m a good cook in spite of myself.

Minus the one melting of a plastic martini shaker (that we were using to make gravy, don’t ask) and my pie that was completely sloopy and not cooked all the way, I think everything turned out great. I know you are probably sick of hearing this since I’m sure everyone has written this on their Thanksgiving posts but really it is true. The food doesn’t matter. It’s just the excuse to sit together for a long period of time and enjoy each other’s company. 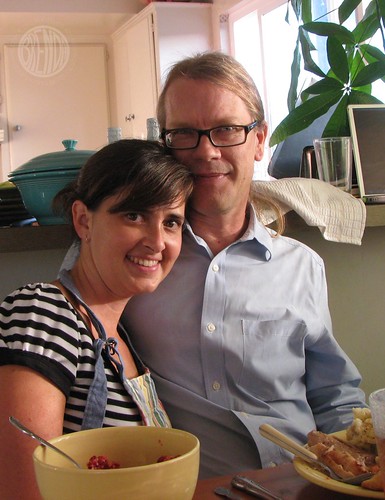 I hate this picture of me with my double chin and turning-sideways-neck but it does make me happy to be in a picture next to Toby. He is a really great husband and I don’t think I talk about that much here on this blog. It’s so much more fun to make fun of all his funny quirks than to gush on about him lovingly. I was really happy that he hung out with us so much. He’s always so busy and my family can be a bit loud and noisy—which usually makes him want to run to his cave and hide. But he was a trouper and actually seemed to enjoy himself which made me enjoy myself more. 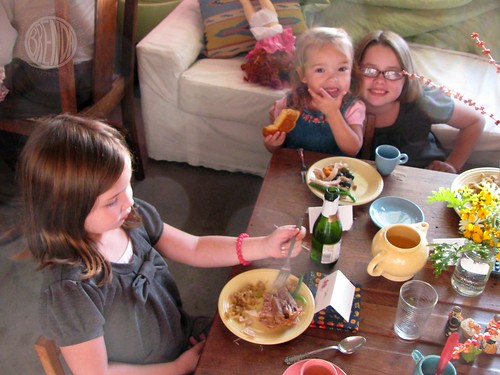 The kids didn’t seem to mind being at the kids table. That was always such a drag for me when I was little. But then we were usually pushed into another room away from the loud laughing group of adults. I thought about putting Rapunzel at the the adult table just for that reason. After all, she is ten now and I personally love sitting and chatting with her. But our table was too small and I couldn’t fit one more chair in between the table legs. (How many times have I heard that excuse? Too many!) I think she actually liked sitting with her sister and Bug where they each got their own personal mini bottle of sparking cider to drink. Of course they drank right out of the bottle like a bunch of winos but we over-looked that. 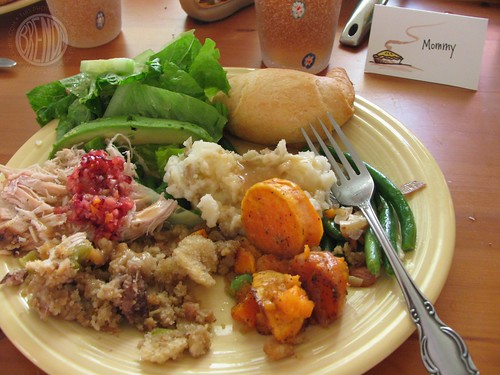 We were too busy enjoying that mess of food up there to care about the children having manners. Can I just say that my new favorite food is sweet potatoes cooked with salt, pepper and olive oil instead of sugar? They are soooooooooo good that way. Maybe I’m just a crunchy California girl but I could skip the marshmallows and maple syrup of candied yams any day. I’d rather get my sugar in desert. 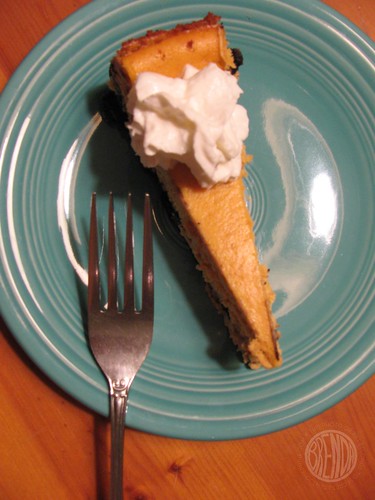 On that sweet note, I will wrap up my Thanksgiving post by saying that I am so so so thankful for my family and my friends and my readers. You guys make the world go ’round for me. How about a downloadable pdf for January so we can fill those days in with lots more plans for fun?